The Master Ultra Thin collection comes in a new variation with tourbillon and moon phase. It is presented in a case made of Le Grand Rose gold, a new alloy introduced by Jaeger-LeCoultre.

The Master Ultra Thin collection comes in a new variation with tourbillon and moon phase. It is presented in a case made of Le Grand Rose gold, a new alloy introduced by Jaeger-LeCoultre.
J 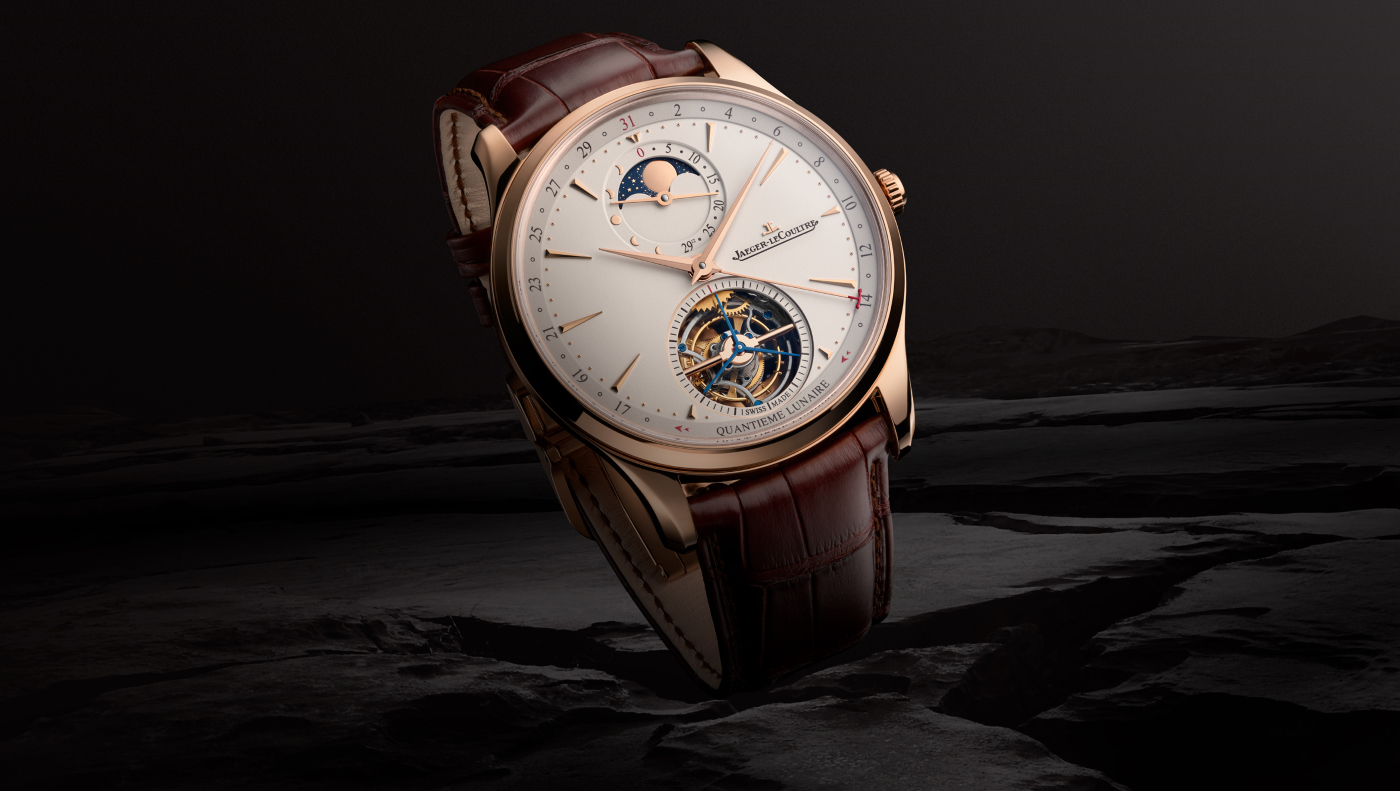 The tourbillon was invented at the dawn of the 19th century, to counteract the negative impact of gravity on the escapements of pocket watches and thus increase accuracy. However, in the 20th century, as pocket watches were superseded by wrist watches, the tourbillon became largely forgotten. In 1946, as part of its continuous research into timekeeping precision, Jaeger-LeCoultre created a tourbillon movement, Calibre 170.

Housed in a pocket watch, it was intended for chronometry trials – and in 1948 won first prize in the Neuchâtel Observatory centennial trials, followed by several more prizes during the 1950s. In 1993 – a time when tourbillon wristwatches were still very rare – Jaeger-LeCoultre produced its first example, a Reverso fitted with the rectangular Calibre 828. Further exploration brought the tourbillon to new horizons, leading to the invention of the first spherical, dual-axis tourbillon in 2004 – the Master Gyrotourbillon 1.

In 2009, the Manufacture introduced the Master Tourbillon with Calibre 978, which won the International Chronometry Prize organised by the Horological Museum of Le Locle, Switzerland. This calibre has been Jaeger-LeCoultre mainstay tourbillon movement ever since, and received a comprehensive update in 2019 featuring new high-end finishes.

For the Master Ultra Thin Tourbillon Moon, Jaeger-LeCoultre’s engineers capitalised on the 978 movement to develop the new Calibre 983, with the addition of the moon phase and ‘jumping’ date complications.

The triple moon phase indicator – displaying the age of the moon as well as its phases in both Hemispheres – is also a recent development, having been introduced last year. Beating at a frequency of 28,800 vph (4 Hz), the new Calibre 983 offers a power reserve of 45 hours. 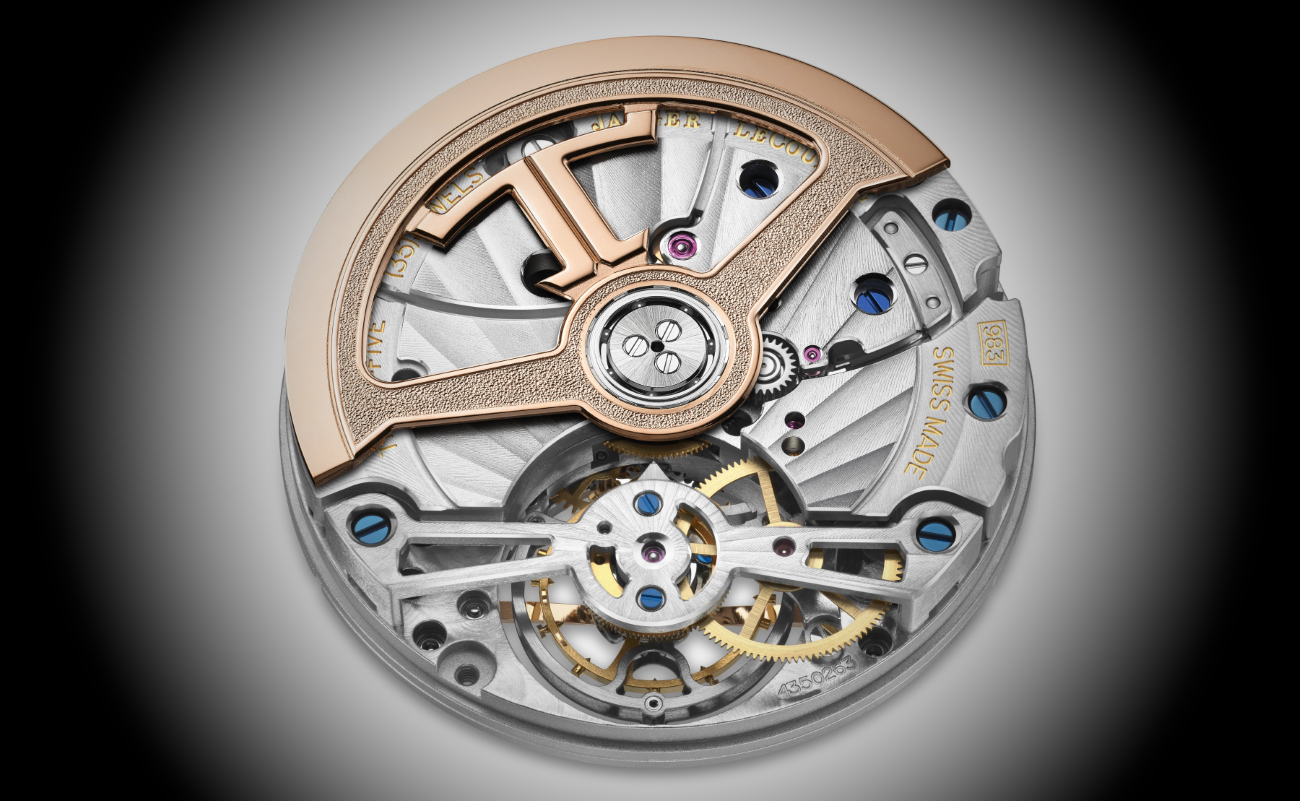 The Master Ultra Thin Tourbillon Moon is presented in a case made of Le Grand Rose gold. Introduced this year, the new pink gold alloy has a remarkable sheen and depth of colour, and is highly resistant to fading over time. True to the classically elegant design codes of Master Ultra Thin, the case is fully polished, with elongated and bevelled lugs and a fine bezel. 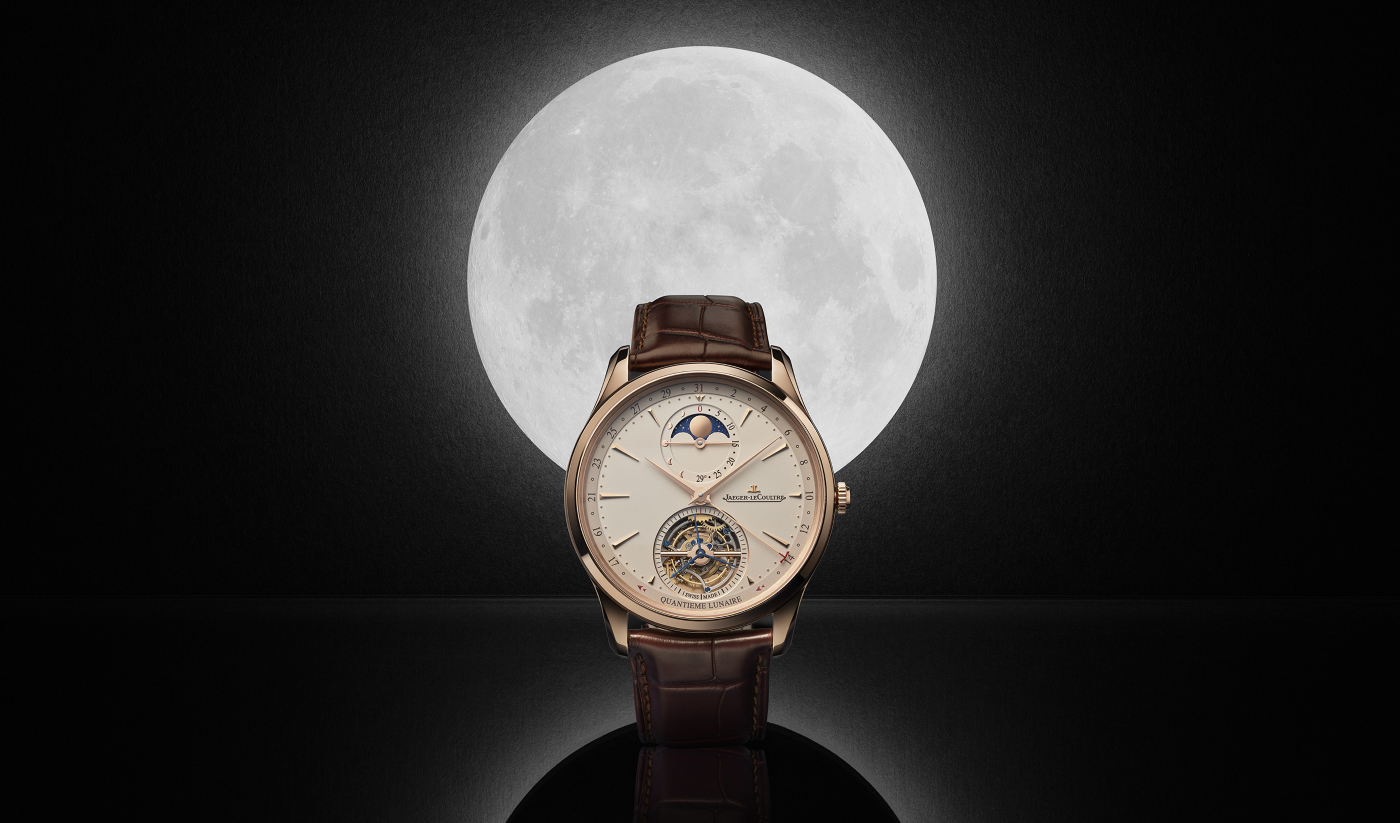 Complementing the warmth of the pink gold, an eggshell-white dial provides a restrained backdrop that places all the emphasis on the moon phase display and tourbillon. Adding to the sense of refinement, the shape of the Dauphine hands is echoed by the elongated arrow-shape of the applied golden indexes. Closer examination reveals different index profiles as the shapes are modified according to their position on the dial, as well as several key details marked in red, to increase legibility and add a discreet touch of colour. 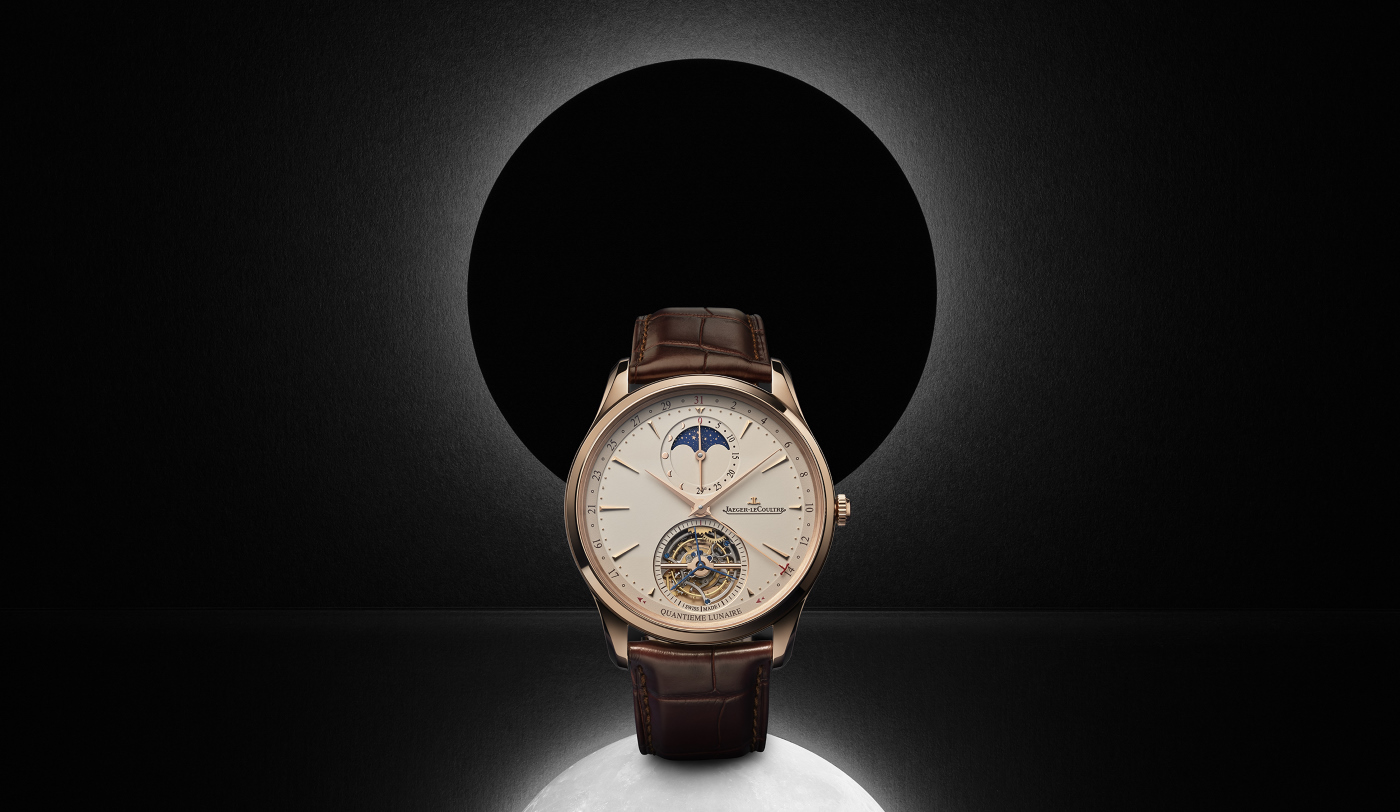 Set in the upper half of the dial, the astronomical complication displays the Northern Hemisphere moon phases in the traditional way – a deep blue sky scattered with stars provides the background for a polished golden disc. Surrounding this is a ring with applied Southern Hemisphere moon phases on the left and the Age of the Moon on the right, each indicated by a double-ended hand. 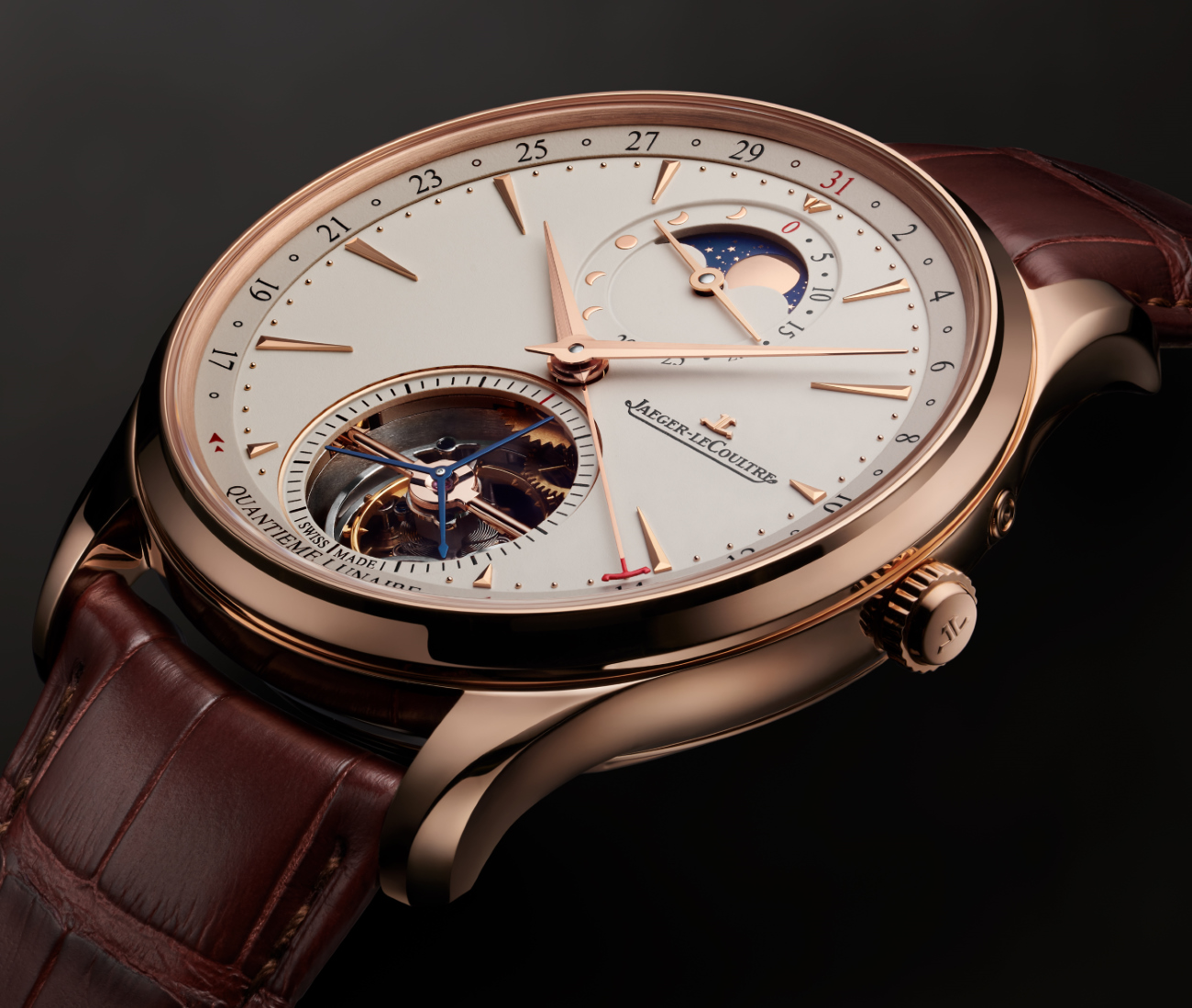 For the peripheral date display the Manufacture’s engineers chose Jaeger-LeCoultre’s signature ‘jumping’ complication. Every month, the date hand makes 90-degree jump, gliding rapidly from the 15th to the 16th, in order not to obscure the tourbillon.

The lower half of the dial is dominated by the tourbillon. A newly designed bridge in polished pink gold secures the titanium tourbillon cage (which weighs around 0.3 grams with its components) as it completes one revolution every 60 seconds. The fine tourbillon bridge and wide aperture maximise transparency and light, drawing the eye right through the mechanism.

On the reverse side, the long span of the open-worked tourbillon bridge further enhances this transparency, while its Côtes de Genève decoration complements the sunray pattern of the stripes on the main plate. The open-worked pink gold winding rotor, which features the JL logo and a combination of polished and micro-blasted surfaces, allows a clear view of the movement, with additional fine finishes including blue screws, circular graining and chamfered bridges.

Like all Jaeger-LeCoultre timepieces, the Master Ultra Thin Tourbillon Moon carries an eight-year warranty in addition to the 1,000 Hours Control certification – one of the watch industry’s most stringent testing protocols.