De Bethune presents the DB Kind of Two Tourbillon, a watch endowed with two faces, two dials and two identities. A technical and aesthetic exercise that opens up a whole new field of research.

De Bethune presents the DB Kind of Two Tourbillon, a watch endowed with two faces, two dials and two identities. A technical and aesthetic exercise that opens up a whole new field of research.
D

ouble-sided watches are not a recent invention. For more than two centuries, these singular mechanisms have been born at the hands of erudite watchmakers, open to the new ideas of the Age of Enlightenment and often inspired by astronomy, the decorative arts as well as mechanical engineering.

With horologists increasingly driven by the temptation to develop ever more complicated models, double-sided cases became increasingly prevalent, a solution enabling their creators to express the full scope of their aesthetic and technical expertise by making it possible to display a greater number of functions. The history of horology has been punctuated by certain major accomplishments in this respect. Already during the Renaissance, tower clocks – the most famous of which is located in Venice – had several faces. A little later, certain table clocks with their vertical, four-faceted dials also displayed several identities within a single object. This was followed by pocket watches also featuring two dials, the best-known being the Leroy 01 by Louis Leroy – presented in 1900 and winner of the Grand Prix at the Paris World Fair – which long remained the most complicated watch ever created. 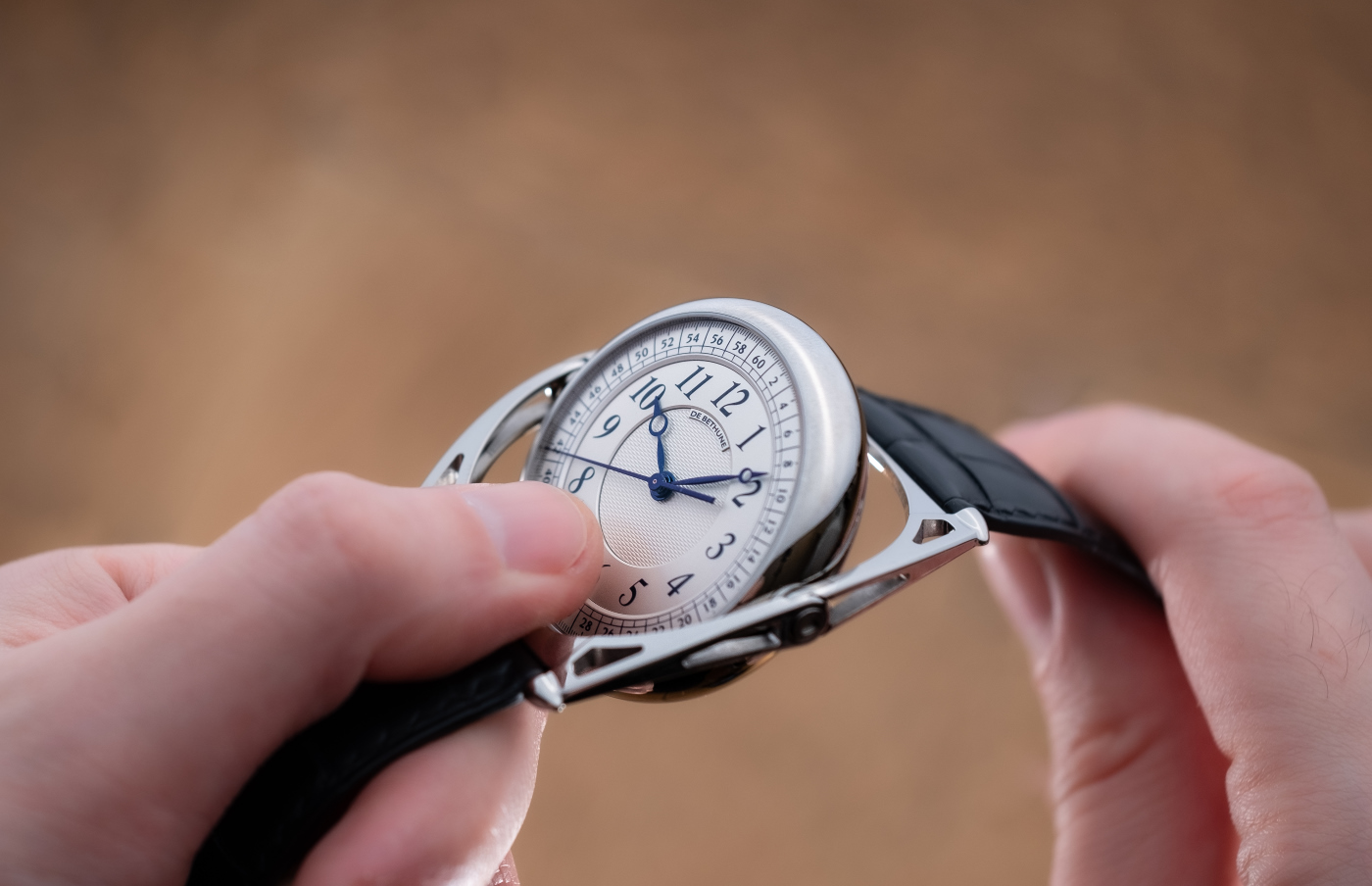 Double-sided watches hold a special place in the realm of highly complicated watches. Beneath the apparent simplicity of this timepiece, De Bethune has clearly not taken the easiest path with this model involving two dials that embody a real watchmaking challenge. Views from back and front reveal an authentic transformation.

This was an idea that had been taking shape for many years in the mind of Denis Flageollet, who was convinced that it would offer him an unprecedented field of research and the opportunity to provide a different, contemporary interpretation. Just as with the invention of his silicon balance and balance-spring, as well as the famous floating lugs, it would enable him to make another contribution to the advancement of horology. 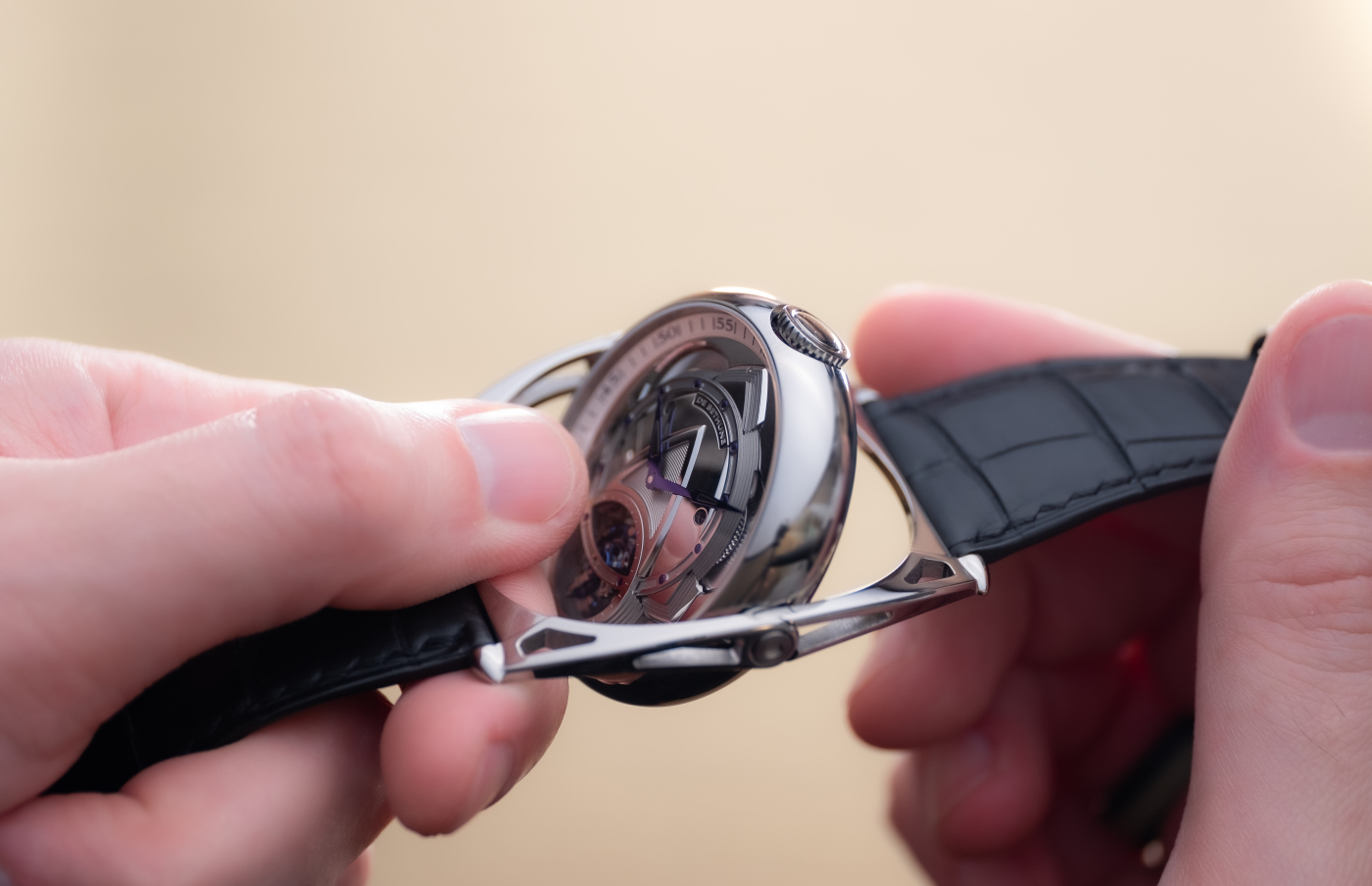 The DB Kind of Two Tourbillon is perfectly reversible and can be worn on either side according to the mood of the moment. This model houses a highly sophisticated mechanism based on a complex system of gears and pinions arranged on the front or back of the watch, and which enables the hands to turn in the right direction, regardless of the dial chosen.

Central seconds on one side? Shift the display of this indication to 6 o’clock on the other? Add a tourbillon that would be invisible on the other side? Opt for a modern or more traditional design? The initial inspiration was to create a watch with two very different identities, of which the aesthetic aspect guided the technical design of the new calibre entirely developed by Manufacture De Bethune at L’Auberson in the Swiss Jura.

The front side of the DB Kind of Two Tourbillon displays a dial featuring a sleek, contemporary design, with central hours and minutes hands as well as a tourbillon at 6 o’clock, complete with a 30-second indication. Extensive work has been done on integrating polished, curved shapes, matt or glossy components, different thicknesses and levels, thereby creating a sensation of ample space and optimal volume, given the minimum height available for a tourbillon watch. A new type of deltoid-shaped bridge – this time perfectly symmetrical – is positioned in the centre, like an isosceles triangle that contributes to the overall sense of harmony.

The other side reveals a dial based on more traditional aesthetic inspiration, with a finely hand-guilloché central part surrounded by the numerals already featured on the dials of De Bethune models such as the DB8 and DB10. The tourbillon with its seconds has vanished, and on this face the hours, minutes and more surprisingly the seconds hands are all centrally positioned. This represents an extremely subtle technical challenge that is not necessarily perceptible at first glance, and therein lies the elegance of this timepiece.

Every detail has been taken into consideration. Easy to use, yet highly complex, the system of floating lugs lends itself particularly well to the “pivoting” of the case. 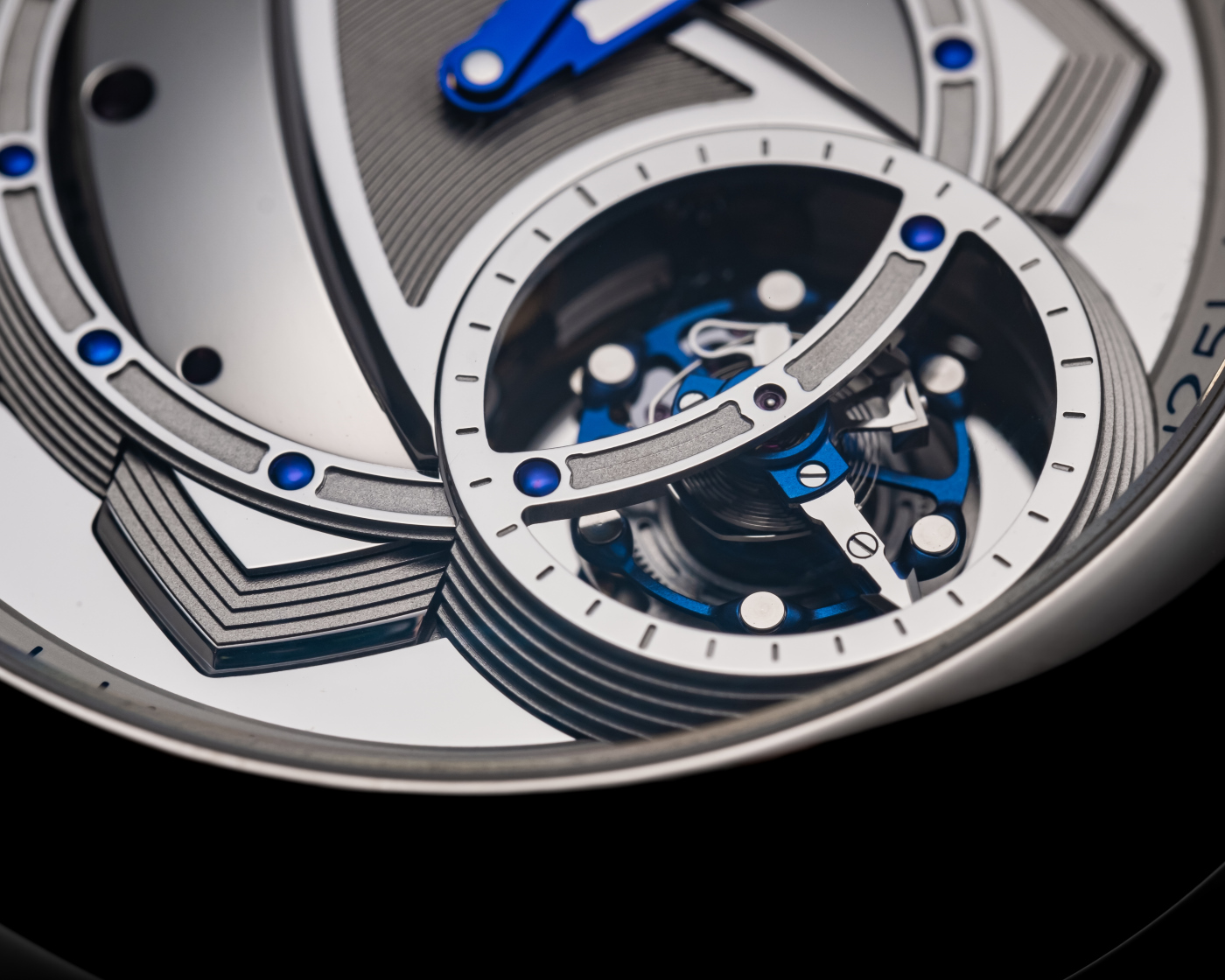 Redesigned for the occasion, these elements have been equipped on each side with an ingenious little rotating mechanism made up of 28 components. For reliability purposes, they are manufactured in stainless materials such as surgical steel or titanium, thus enabling them to withstand the external aggressions of water, humidity, temperature variations and continuous contact with the skin.

Thanks to a cam, a small “notch” allows the watch case to be instinctively and perfectly positioned in line with the floating lugs. The round case rotates on its central axis and can be positioned, front or back, in a delightfully easy, smooth and entirely natural way. 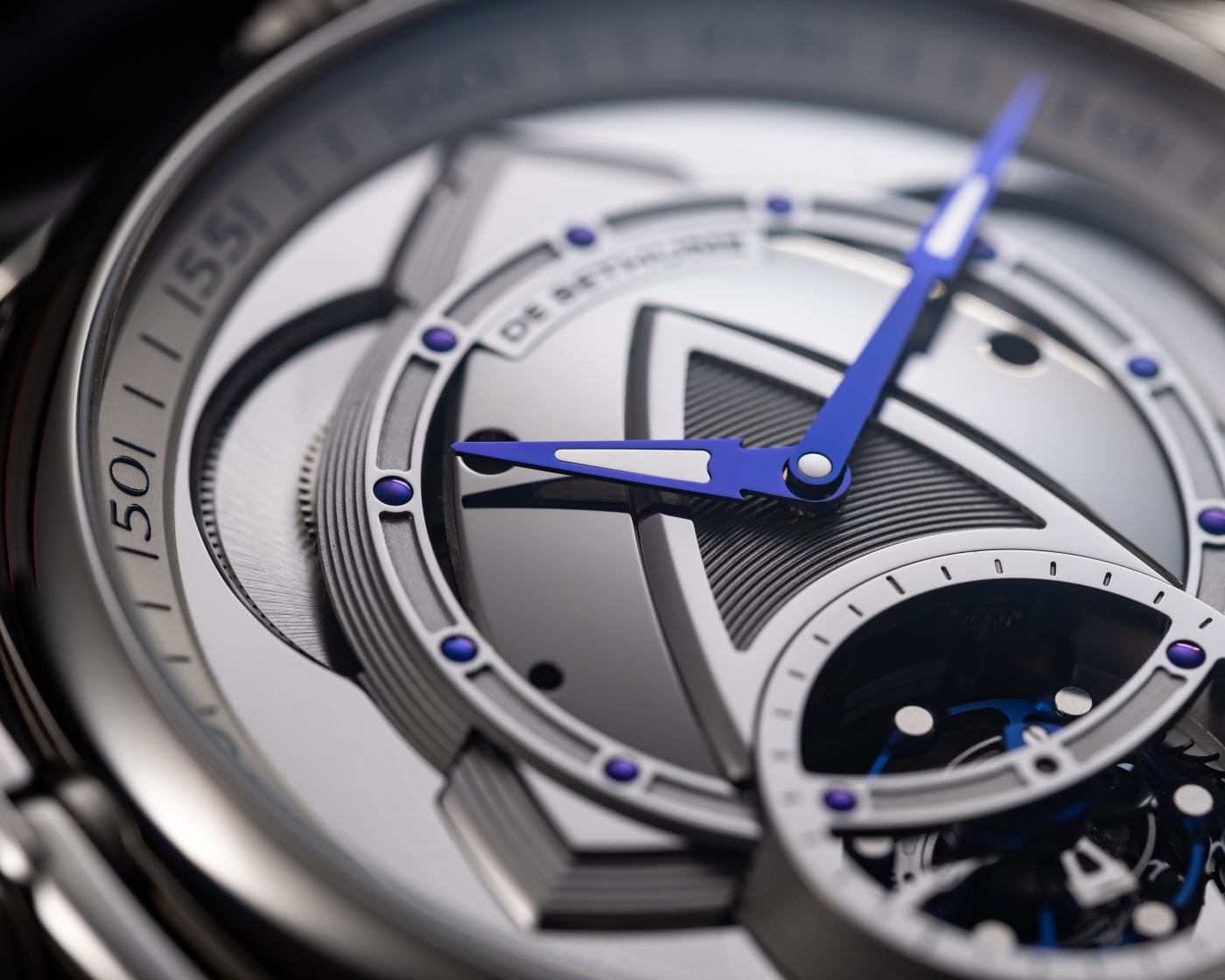 Finally, the DB29’s case middle quickly became a key element in the pivoting case project developed by De Bethune. Its perfectly symmetrical shape offers a beautiful balance with the floating lugs and its elegant crown totally integrated at 12 o’clock (or 6 o’clock depending on the side chosen). It thus swivels naturally and the circumference principle is patently obvious, offering a true understanding of the object. 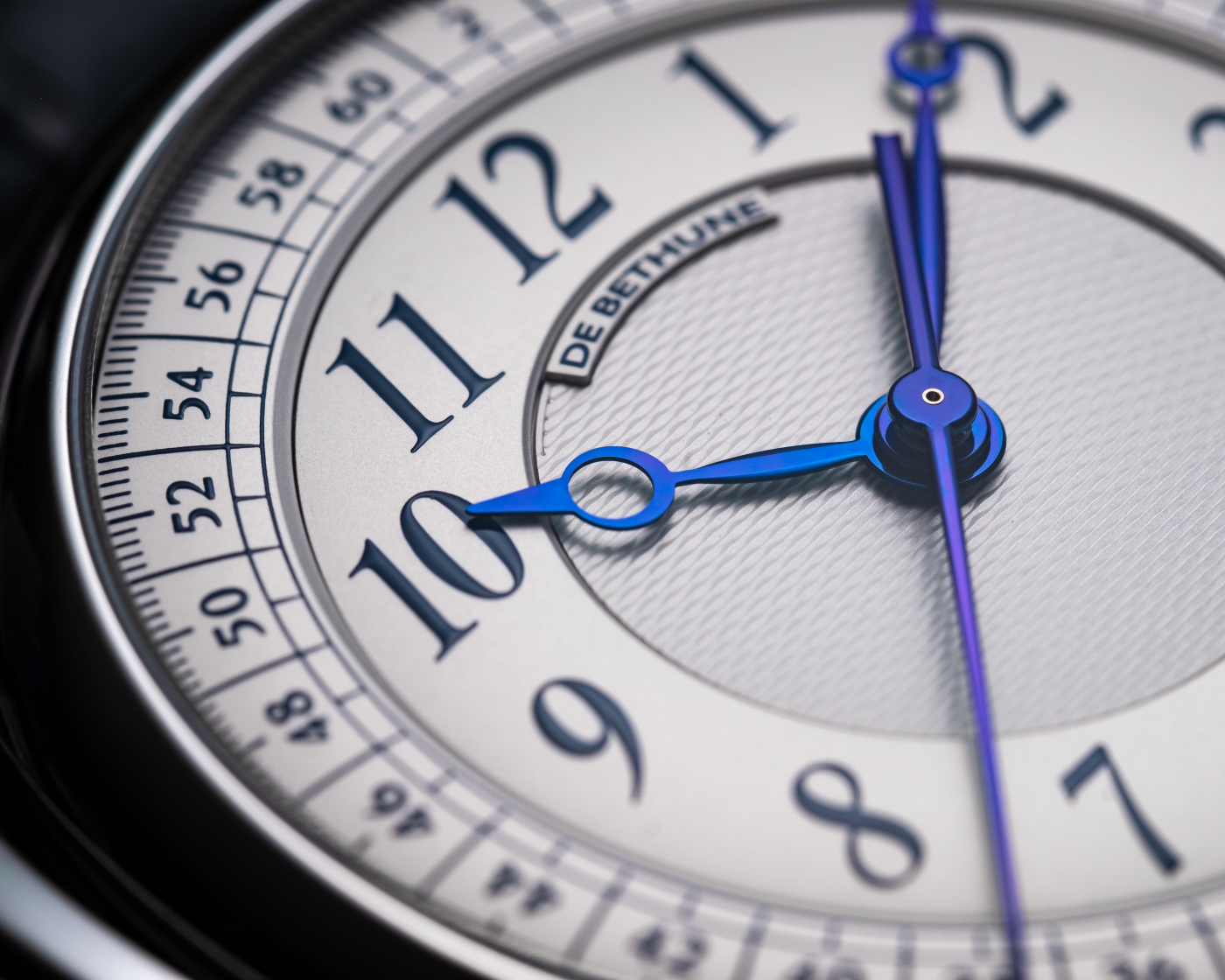 All in all, with its elegant design, the combination of contemporary mechanics with a more traditional face, as well as the meticulous care devoted to details, legibility and comfort, the DB Kind of Two Tourbillon perfectly illustrates one of the great principles of the Manufacture De Bethune: reinterpreting grand traditions with a contemporary vision of the horological object, thereby opening up a new field of expression that is refined and sophisticated while preserving user-friendliness and simple read-off. A work of art with two faces, whose timeless beauty reflects mechanical and aesthetic perfection. 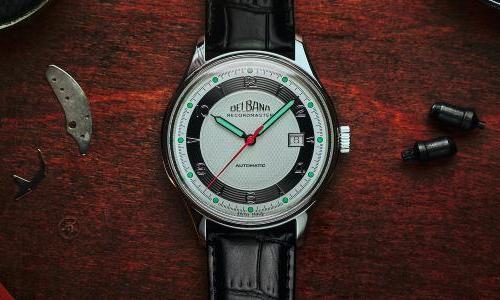