The Phoenix collaboration is a concept from The Naked Watchmaker platform, developing a synergy between Schwarz Etienne and Les Ateliers Blandenier, to make a unique timepiece that would showcase the watchmaking process of the former and the artisanal skills of the latter.

The Phoenix collaboration is a concept from The Naked Watchmaker platform, developing a synergy between Schwarz Etienne and Les Ateliers Blandenier, to make a unique timepiece that would showcase the watchmaking process of the former and the artisanal skills of the latter.
T

he goal of the Phoenix project by Schwarz Etienne and Les Ateliers Blandenier is to integrate multiple skills into the making of a unique “Art Piece” and to present them on The Naked Watchmaker in order to both share the complexity of the project and the time and people involved within such an undertaking.

The watch can be split into two parts, each containing multiple steps. The watch itself and the process of decoration of components and their assembly, the second part, the dial making section.

Multiple artisanal techniques that individually carry historical value combined can result in unusual effects. The depth of the blue enamel sky was selected to generate a contrasting back-drop for the applied Phoenix positioned above the pyrite seconds disc, making it appear to be suspended in the sky.

The base of the dial is made in 18ct gold and filled with enamel, the smokey blue and white effect of the enamelling is to generate the impression of a blue sky. The gold Phoenix is hand engraved and then lacquered, The Phoenix then links to the quote around the dial: “Our greatest glory is not in never falling, but in rising every time we fall,” Confucius. (A statement in an ever-changing and challenging world). 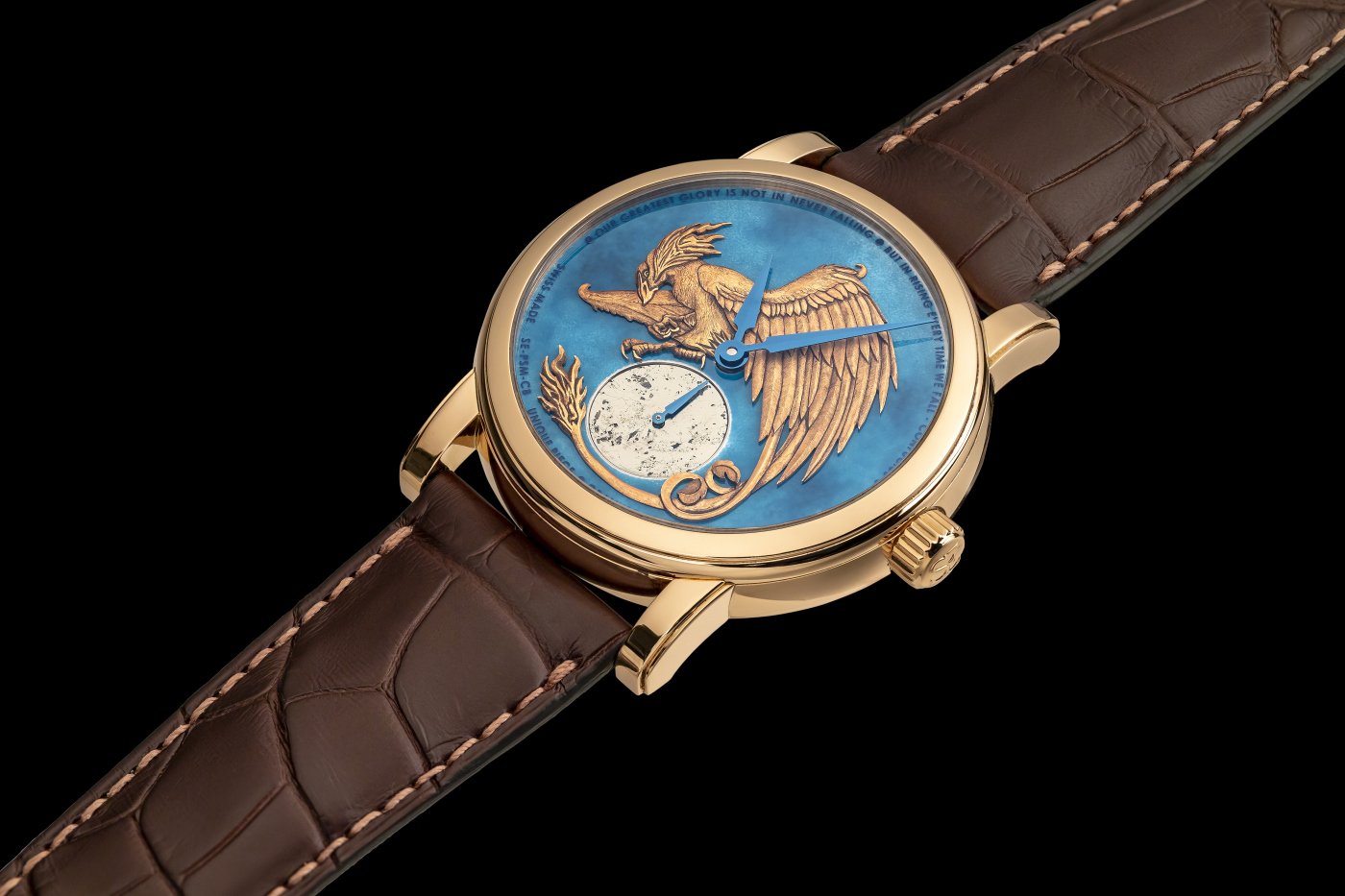 Once the base-plate is finished the enamelling can be added. The sky effect for the dial was married in colour to the hands, but to ensure the association in shades was correct the enameller made multiple trials with enamel powders that were heated in an oven (600 degrees Celsius) to ensure the final choice was correct. 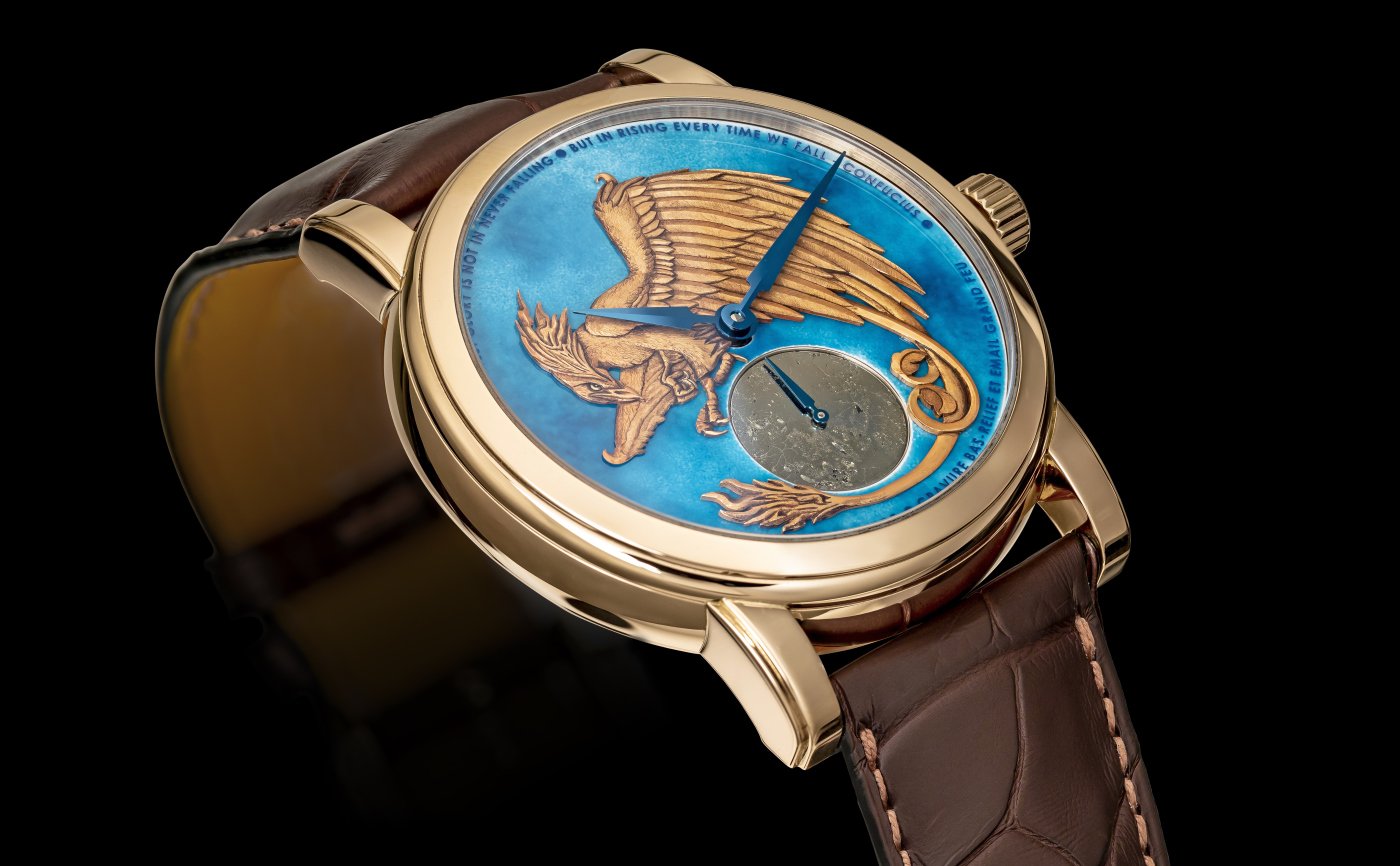 Once the design has been chosen and traced, The plate of red gold used to make the Phoenix could be precisely cut out by wire erosion prior to being hand-engraved. This engraving work took about 3 weeks to complete.

The small seconds subsidiary dial is set with pyrite stone, the name of the stone from the Greek “pyr” meaning fire.

Step one was to define the design upon which the dial would be made. The base plate was made in 18k gold. To be enamelled it required having sufficient space on both sides to have enamel added to assure equivalent tensions within the dial. 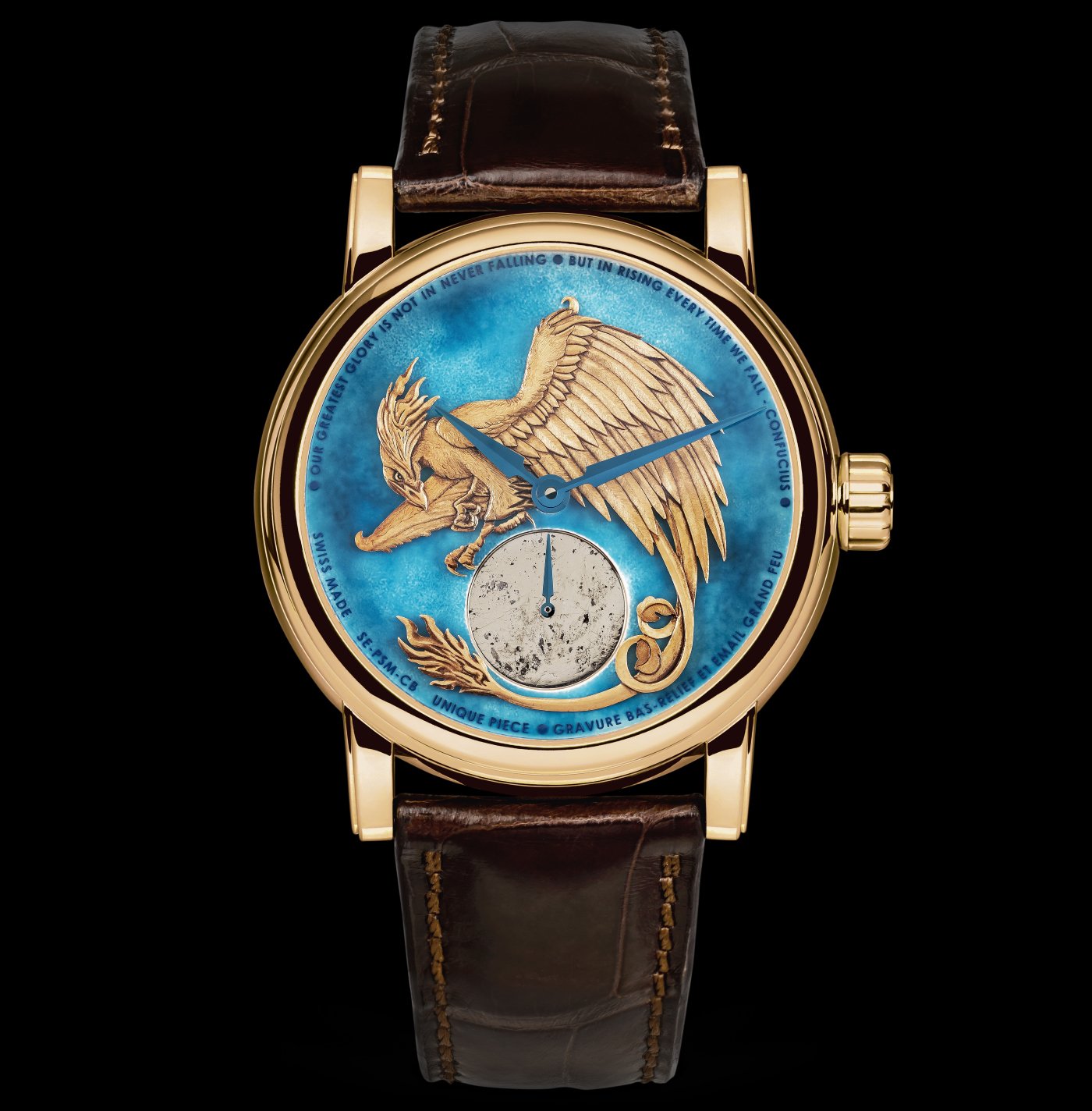 After the engraving was complete, an acrylic painting was made on the surface to add a patina of age and increase the three dimensional effect. Without this final step much of the detail of the engraving can in essence be lost, washed out by uniformity of the material colour. Only the beak and claws have been polished.

The off-set small seconds disc was made from pyrite. Cubes of pyrite were machined to identify the one that most resembled the original design.

Schwarz Etienne supplied the watch for the dial, a 42 mm Roma case in 18k red gold, and integrated a hand-finished ASE 100.00 in-house automatic calibre with micro-rotor. The selection of the Schwarz Etienne “Roma” case was made in order to have a classic understated design that would highlight the aesthetics of the dial and movement. 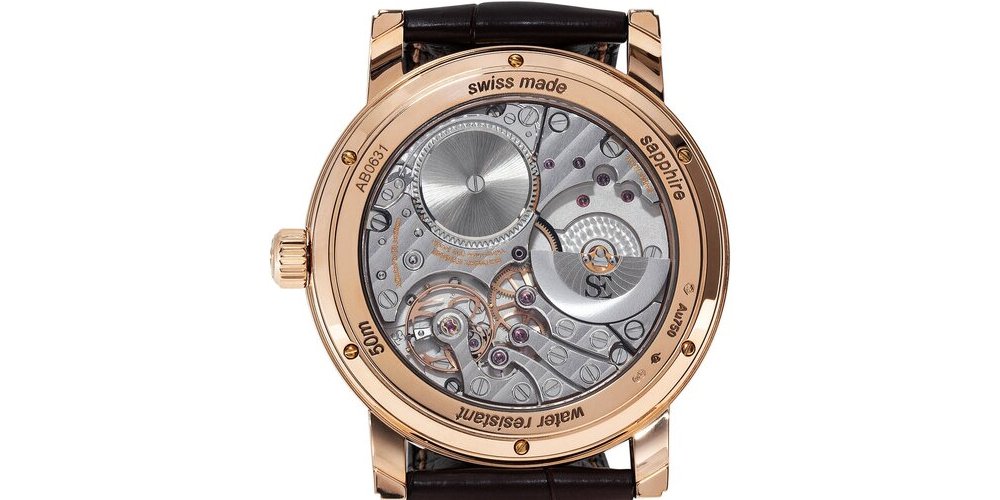 The ASE 100.00 automatic movement features 230 components, including 38 jewels. The balance has a frequency of 21,600 VpH (3Hz) and, assuming the watch is fully wound, the movement will run autonomously for up to 86 hours.

Unlike a movement fitted with a conventional oscillating weight, there is nothing to obstruct the view of the beautifully decorated bridges and various other components.