MeisterSinger kicks off its 20th anniversary with the Astroscope


The Astroscope Edition displays the weekdays in a way never seen before, i.e., in relation to the celestial bodies that have been attributed to the various days of the week since ancient times.

MeisterSinger kicks off its 20th anniversary with the Astroscope

The Astroscope Edition displays the weekdays in a way never seen before, i.e., in relation to the celestial bodies that have been attributed to the various days of the week since ancient times.
M

eisterSinger mechanical watches display the time with great precision and in an unusual way, using only one hand, just like back in the days when the first mechanical timepieces were invented in the late Middle Ages. They literally point to that one fleeting moment in time, our true reality, and thus convey a tranquil sense of time.

The Astroscope Edition displays the weekdays in a way never seen before, i.e., in relation to the celestial bodies that have been attributed to the various days of the week since ancient times.

The new variant is also designed with a dark dial that represents the night sky. The numerals are depicted in a fine serif typeface and the astronomical symbols are designed in luminous orange. Together with the luminous hand, the time can also be easily read at night.

Above the circular date window and the MeisterSinger logo there is an intimated horizon, enhancing the impression of gazing up at the heavens. The new model comes with a super-soft calfskin watchstrap in sunshine orange corresponding with the texture on the dial.

The Astroscope is powered by a Swiss automatic movement that can be viewed through the exhibition glass back, which is affixed with six screws. The stainless steel case is a slender 40 mm in diameter and water-resistant up to 5 bar. 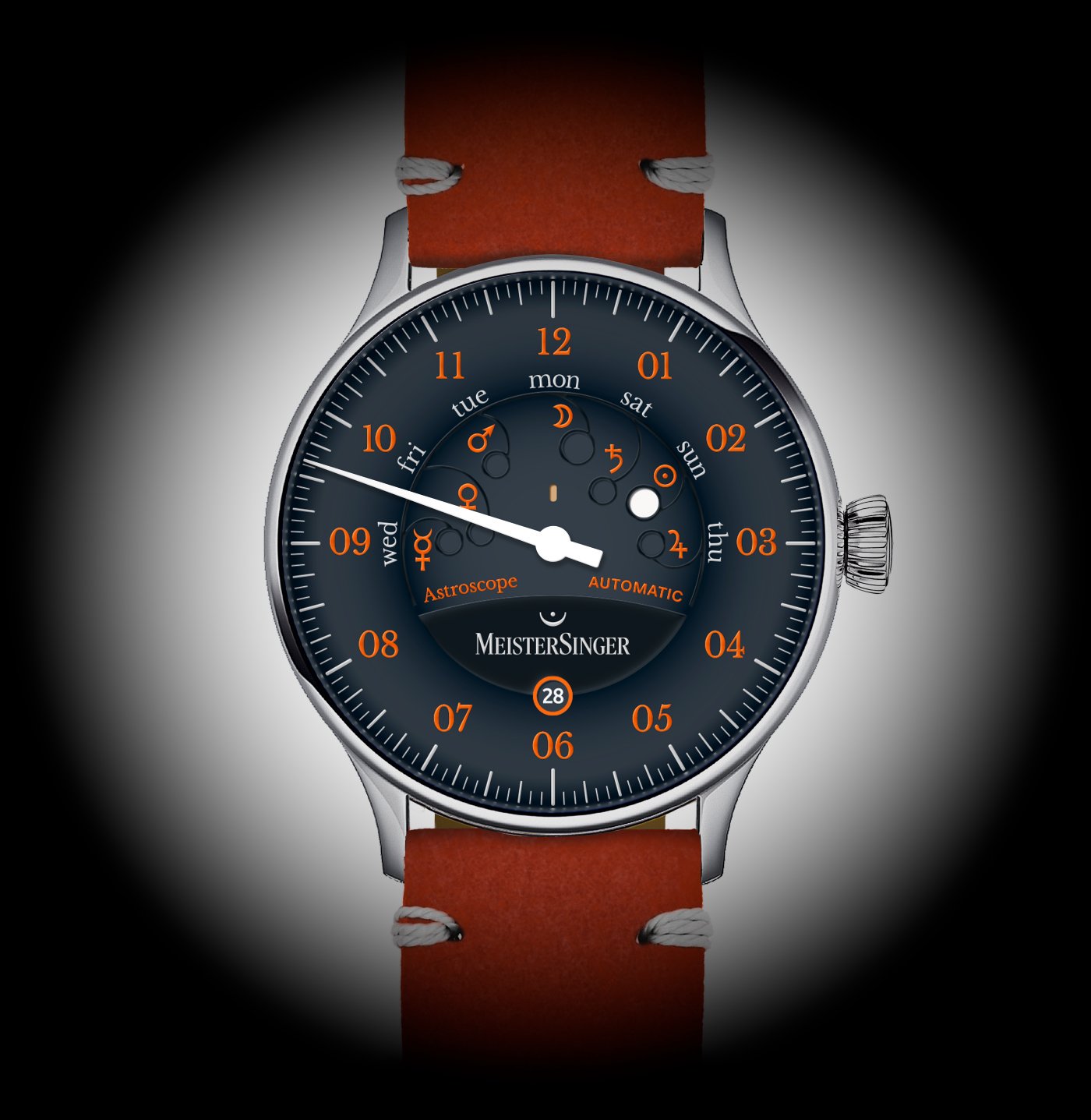 It’s the sun and the moon that divide our time into day and night and the twelve months of the year for everyone to perceive and observe. However, the division into seven-day weeks does not follow any particular astronomical rhythm but has more of a mythological background. The method most likely dates back to the Babylonians, who, like many other peoples, considered the number seven to be especially holy and connected with seven celestial bodies: The Sun, the Moon, Mars, Mercury, Jupiter, Venus, and Saturn. 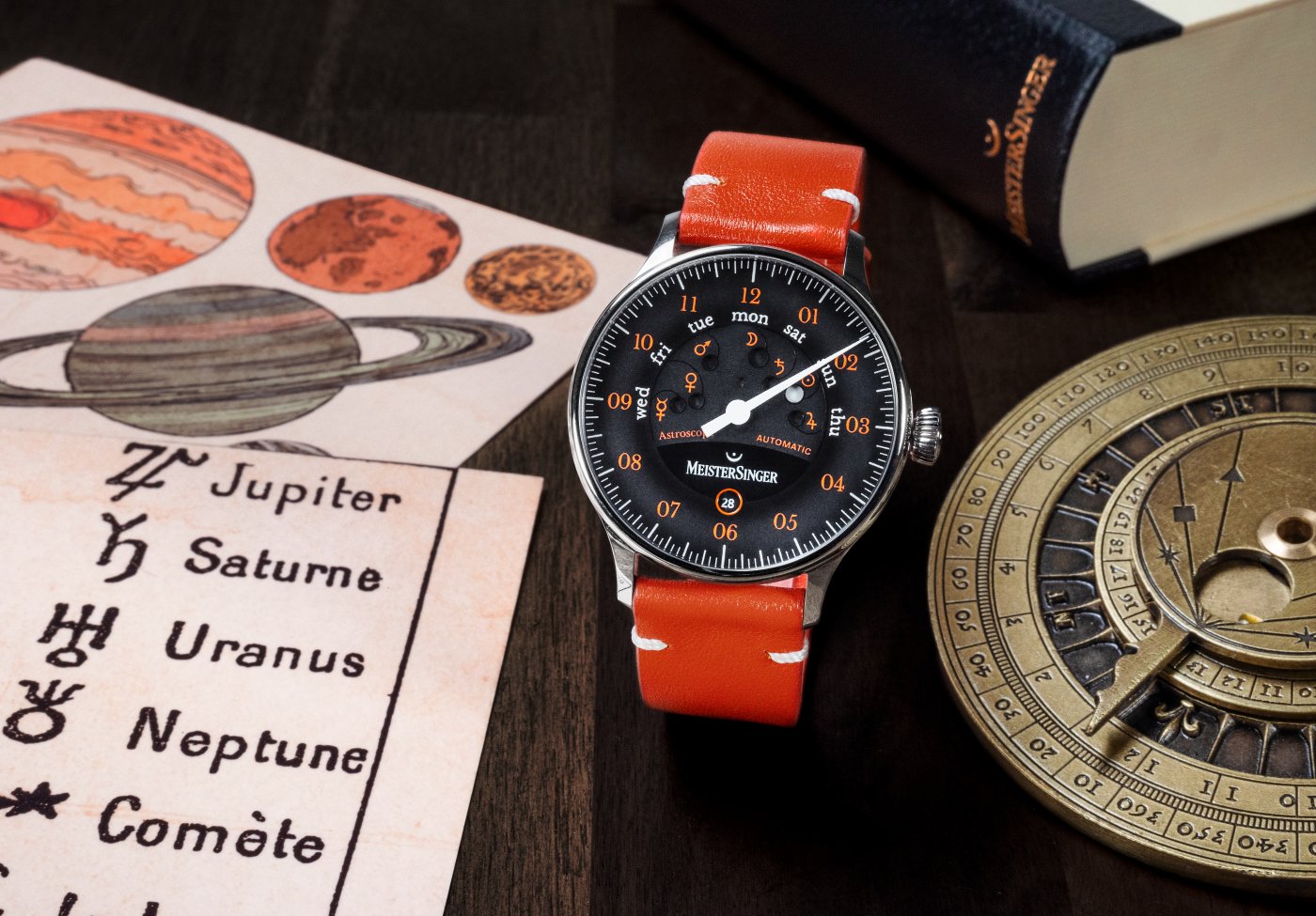 Just as most planets are named after Roman gods, most days of the week in both German and English take their corresponding names from Norse mythology. Throughout history, the allocation of the days of the week to celestial bodies has endured the test of time:

With these celestial bodies and their classical symbols, the Astroscope displays the days of the week not in a linear or radial fashion but wandering back and forth in a constellation that only occurs every ten to twelve years in the southern night sky of the northern hemisphere.

The Astroscope stylizes this formation on its dial; a bright dot appears on Monday at about 12 o’clock at the moon symbol and the next day to the left at the Mars symbol. On Wednesday it appears next to Mercury at about 9 o’clock; on Thursday next to Jupiter at 3 o’clock. 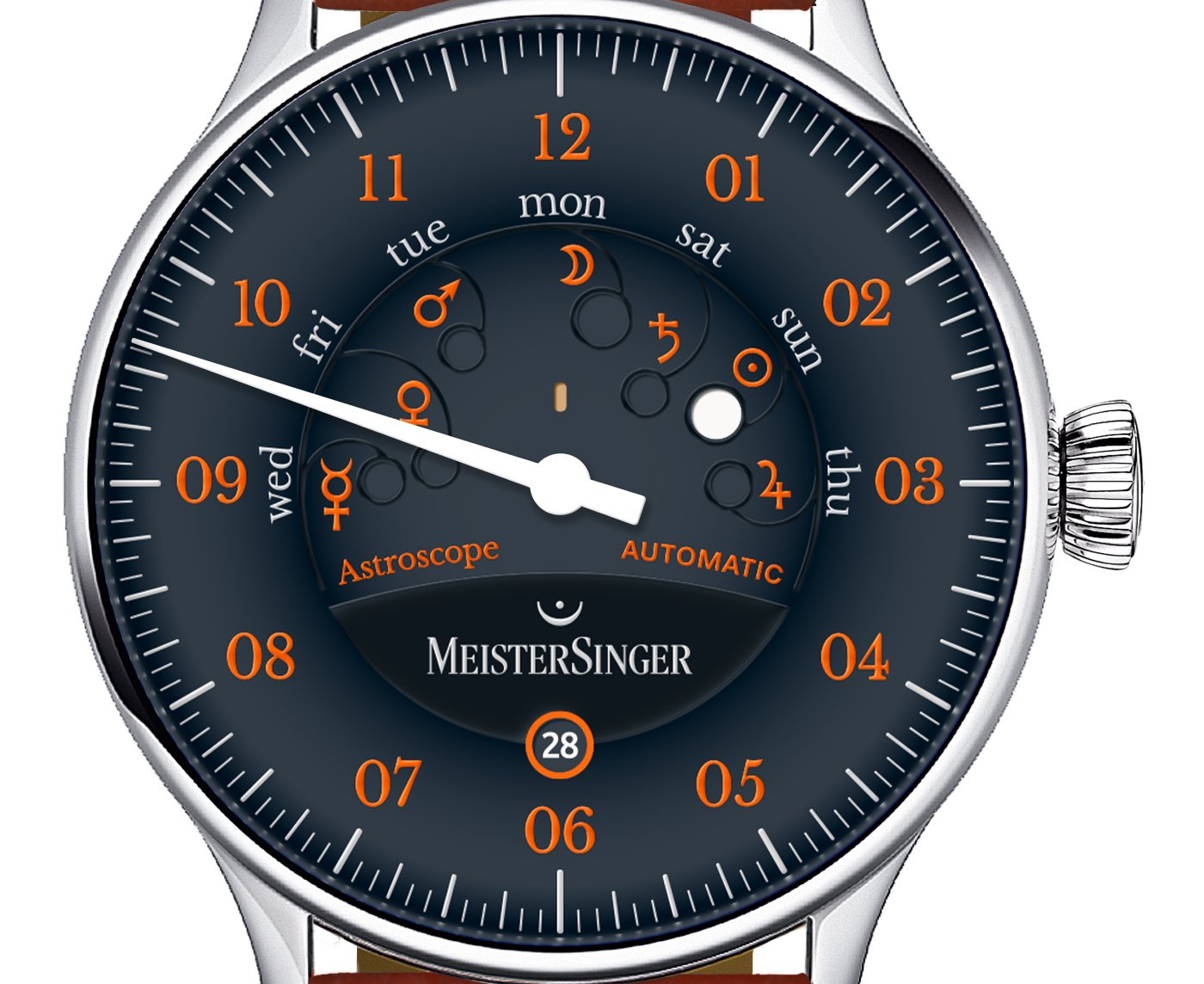 In reality, however, it does not jump back and forth. Under the dial, a large weekday disk with a number of bright dots on it moves one step further from one day to the next, always moving in a circle, just as it is in the world of celestial mechanics. This is as amazing and yet as easy to understand as the time when displayed with only one hand.

TIME.KEEPER The new 40-mm M2 Seven Seas S from Tutima Glashütte features a dégradé dial in dynamic red or maritime blue. As is typical for watches in the Seven Seas (...)

TIME.KEEPER Like no other model by Junghans, the Meister fein combines classical design elements with a delicate design language. With this model, the German brand (...)