Created in 1957 and admired by generations of divers, Omega’s Seamaster 300 has remained an iconic timepiece for more than 60 years. In 2021, the latest models are not only thinner than previous versions thanks to the new sapphire glass, but they also include plenty of vintage tributes, a brand new Master Chronometer upgrade and an exclusive new alloy.

Created in 1957 and admired by generations of divers, Omega’s Seamaster 300 has remained an iconic timepiece for more than 60 years. In 2021, the latest models are not only thinner than previous versions thanks to the new sapphire glass, but they also include plenty of vintage tributes, a brand new Master Chronometer upgrade and an exclusive new alloy.
T

he original Seamaster 300 arrived in a time of great change throughout the world. After World War II ended in 1945, society began to embrace a new and exciting era of exploration, travel and adventure. Science and industry were rapidly progressing too, and Omega was determined to respond with a series of watches dedicated entirely to professionals. In 1957, the “Professional Trilogy” collection was therefore born, including the Speedmaster, the Railmaster and the Seamaster 300.

As part of that family, the Seamaster 300 was launched as Omega’s first-ever professional divers’ watch. The design was notable for its black dial, luminous indexes and large hands, which made it very simple-to-use and easy-to-read in a variety of conditions.

On top of that, it was an innovative marvel. As well as offering an ingenious high- pressure water-proofing system, the watch also introduced Omega’s first diving bezel, built with a special safety feature to prevent accidental turning during dives. 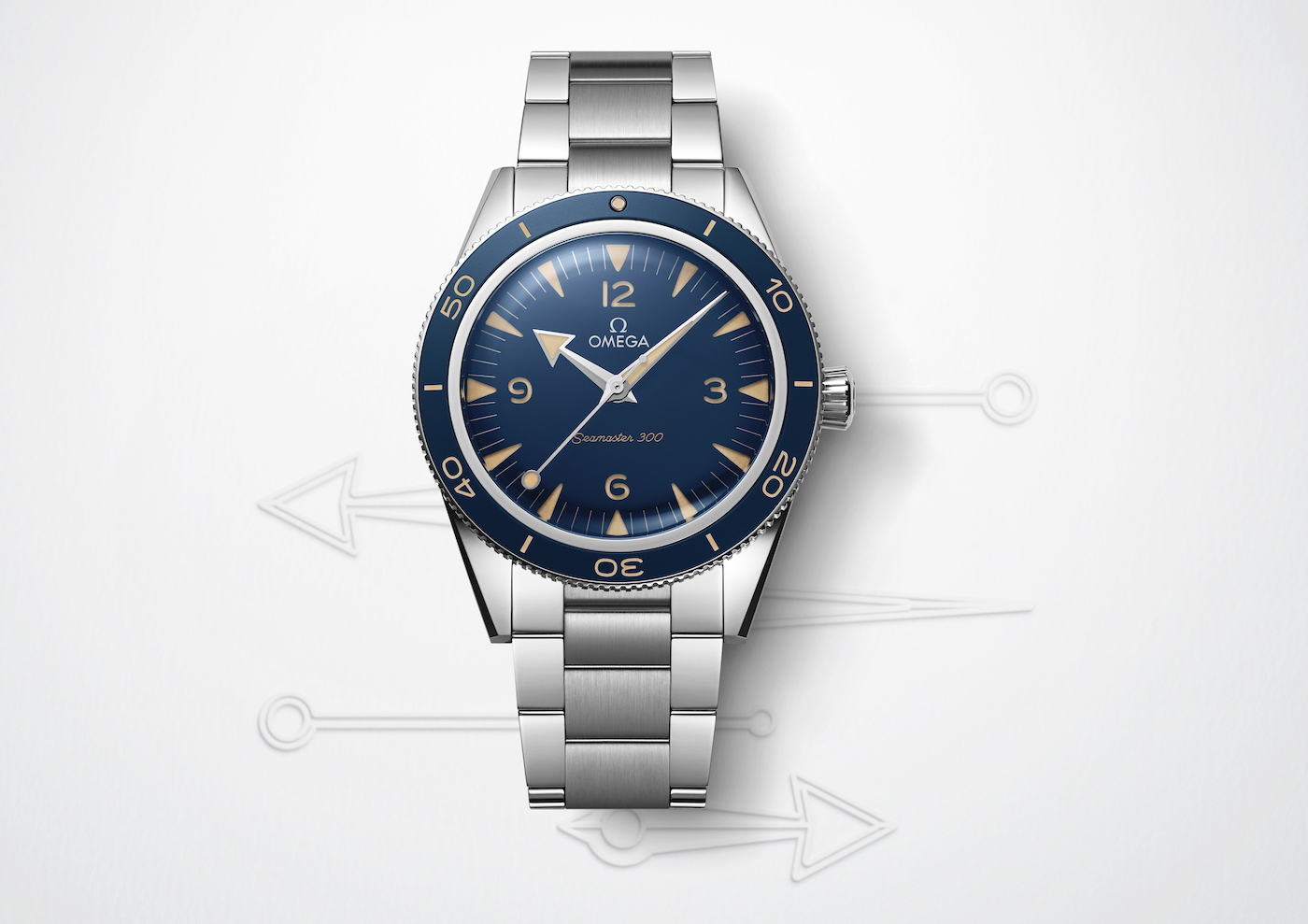 The Seamaster 300 instantly appealed to experienced divers, delivering the best precision and reliability for life under water. As time went on, the watch’s reputation grew, and it later became a popular choice for recreational divers, scientists and militaries at sea.

The new collection follows the spirit of those original models. Each of the 41 mm timepieces will be delivered in classic stainless steel, with thinner bezels crafted from an oxalic, anodised-treated aluminium for increased hardness.

The bracelets are also in stainless steel and now come with an improved fit and finishing. Their shape has been ergonomically adjusted with streamlined fittings and a thinner, polished-brushed clasp. On the leather straps, a new buckle has also been included.

Perhaps the most noticeable changes can be found on the new dials. For this, Omega has utilised a sandwich concept, including a base layer with Super-LumiNova and a second plate over the top with cuttings for the recessed hour markers and numerals. In a nod to history, these numerals are in the vintage Arabic open style, which appeared on early Seamaster 300 models in the 1960s.

Omega has also reintroduced the popular lollipop central seconds hand for the stainless steel models, with its tip now filled with Super-LumiNova. The hand works beautifully with the cleaner dial, which features only the Omega logo and Seamaster 300 name. There are no longer any references to the movement (these have instead been moved to the caseback).

Those with a keen eye may also notice that the slim inner frame has given the dial a larger display, with an opening of 30.4 mm, as opposed to the previous 29.5 mm. Furthermore, Omega has achieved a slightly slimmer Seamaster 300 thanks to a new domed sapphire crystal on the face of the watch. This thinner look is enhanced by the addition of a new conical crown at the side of the case. 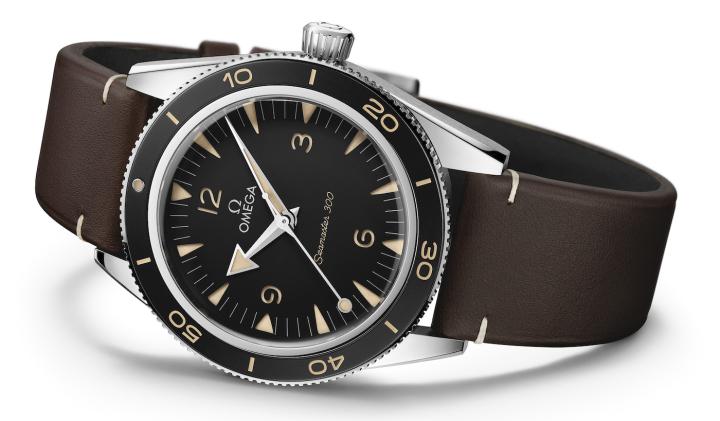 Finally, the caseback includes a wave-edged design, as well as sapphire crystal that offers a view of the Omega Co-Axial Master Chronometer Calibre 8912. The movement and full watch have been certified by the Swiss Federal Institute of Metrology (METAS) at the industry’s highest standards of precision, performance and magnetic resistance.

In a truly pioneering moment, this year’s new Seamaster 300 collection will also include a 41 mm model crafted from Omega’s exclusive Bronze Gold. The watch represents the very first Omega to be created in this patent-pending alloy. 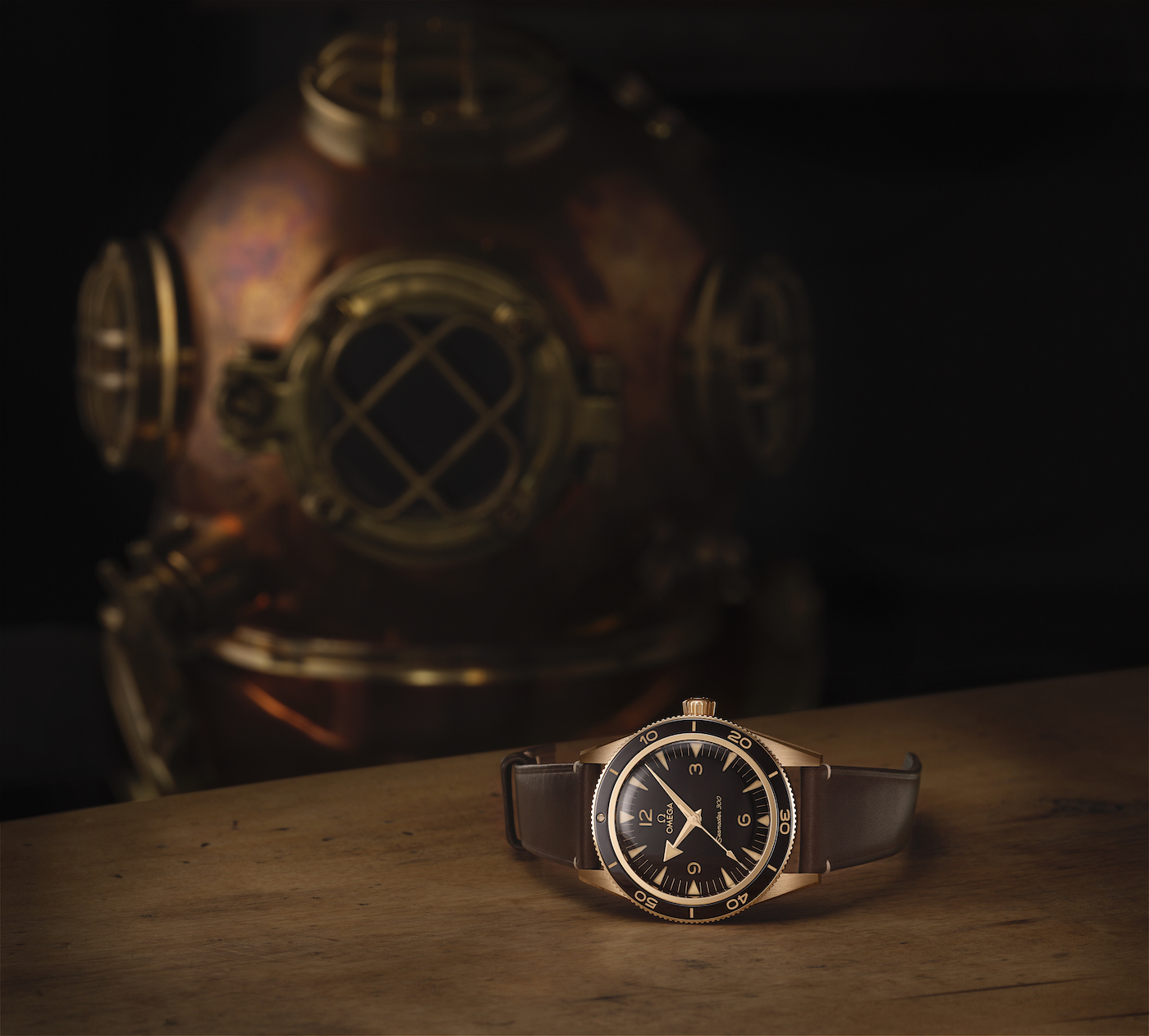 Bronze has a long and traditional history with ocean exploration, having been used in nautical applications such as boat propellers and diving helmets. There is also a historical reference to copper being blended with gold or silver to create an alloy once known as Corinthian Bronze. While details of its exact composition are limited, various ancient Greek texts reinforce the reputation of Corinthian Bronze as a highly prized metal for the creation of statues, vases, vessels and more. Echoing its own Greek inspired name, Omega has revived this classical art today in its own unique way.

Bronze Gold was specifically developed to produce a pleasing aesthetic and hue, while also offering a bronze alloy that could be worn with direct contact on the skin, thanks to its distinctive composition.

Used for the entire case and buckle, the one-of-a-kind alloy is enriched with noble elements such as 37.5% gold, hallmarked as 9K, as well as palladium and silver, to create a unique colour which sits exactly between the brand’s 18K MoonshineTM gold and 18K SednaTM gold.

As well as featuring a soft pink hue, during wear it offers incomparable corrosion resistance without verdigris-oxidation, and will therefore age slowly and retain its natural and beautiful patina over a longer period of time. For fans of bronze watches and innovative materials, this is great news.

To complement the impressive Bronze Gold, the bezel ring of this timepiece has been created in brown ceramic with a diving scale in vintage Super-LumiNova. Thanks to the fact that the dial is an internal component, Omega took the opportunity to use a common bronze alloy (CuSn8) in order to offer a unique dark brown colour with a patina that was created after a special aging process had taken place. The contrast with the exclusive Bronze Gold is therefore particularly captivating. The model comes with a full 5-year warranty and is powered by the Omega Co- Axial Master Chronometer Calibre 8912.