A key update at Perrelet


A part of the Festina Group, Swiss watch manufacture Perrelet is renowned for its patented Double Rotor and Turbine technology. The brand has developed the new automatic calibre P-331-MH, that drives the its flagship collections today and obtained the Chronofiable® certification issued by the Laboratoire Dubois of La Chaux-de-Fonds. A new collection with a completely new manufacture movement will also be unveiled soon.

A key update at Perrelet

A part of the Festina Group, Swiss watch manufacture Perrelet is renowned for its patented Double Rotor and Turbine technology. The brand has developed the new automatic calibre P-331-MH, that drives the its flagship collections today and obtained the Chronofiable® certification issued by the Laboratoire Dubois of La Chaux-de-Fonds. A new collection with a completely new manufacture movement will also be unveiled soon.
F

or some time now, Perrelet has limited communication regarding its behind-the-scene activities. During this period, it has been busy restructuring the brand with a marked emphasis on Research & Development with the aim of consolidating the excellent quality and reliability of its watches. While the brand remained silent on the restructuring front, there has been no shortage of releases of new products.

The first sign of renewal at Perrelet was announced at the end of 2019, coinciding with the tenth anniversary of the Turbine family. To celebrate the occasion, Perrelet unveiled the Turbine EVO collection. With an updated design and a brand-new metal bracelet, the most exciting novelty was the incorporation of the brand’s first-ever COSC chronometer-certified automatic movement. 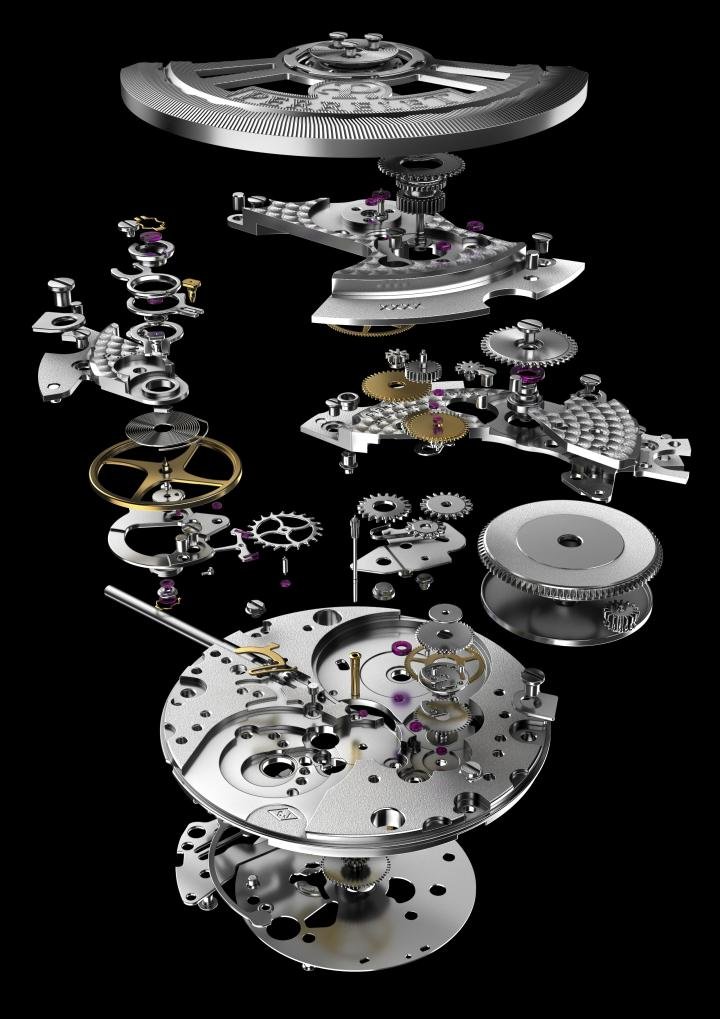 Exploded view of the Calibre P-331-MH

This milestone marked the beginning of a new era for Perrelet. It offered irrefutable proof of the brand’s desire to pursue the path of innovation set out by master watchmaker Abraham Louis Perrelet when he founded the brand in 1777. As the precursor of the self-winding movement, automatic movements are an integral part of the brand’s DNA.

Thanks to the hands-on approach of Miguel Rodriguez, the owner and the president of the brand, Perrelet is ready to face a new challenge in the 21st century. His vision is to equip Perrelet’s distinctive timepieces with new-generation automatic calibres that meet the quality and high mechanical performance required by Swiss Haute Horlogerie standards. 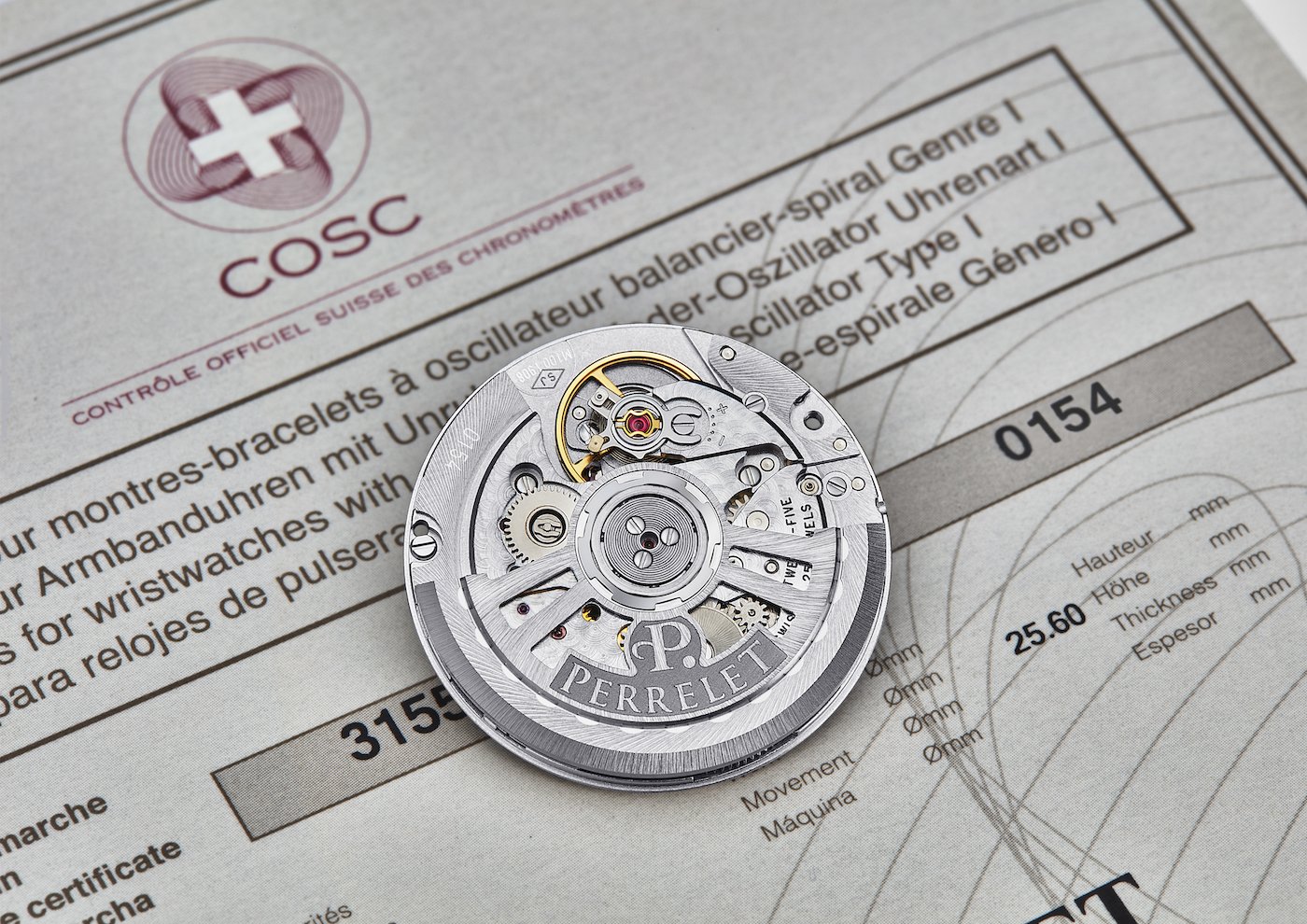 As Miguel Rodriguez points out: “We have the advantage of owning several movements and components production sites combined with a prestigious heritage that sets us apart as one of the leading independent watchmakers in Switzerland. All this represents enormous added value for Perrelet, which relies on Soprod for the development – in complete autonomy – of its exclusive calibres with their outstanding functionality, resilience and performance.”

The group is comprised of six companies which thanks to their watchmaking know-how are entirely self-sufficient in the production of all the components of a movement, even the key components such as pallets and balances, as well as escapements and balance springs. The balance springs are manufactured by MSE (Manufacture de Spiraux et d’Échappements) based in Muriaux, in the Franches-Montagnes. 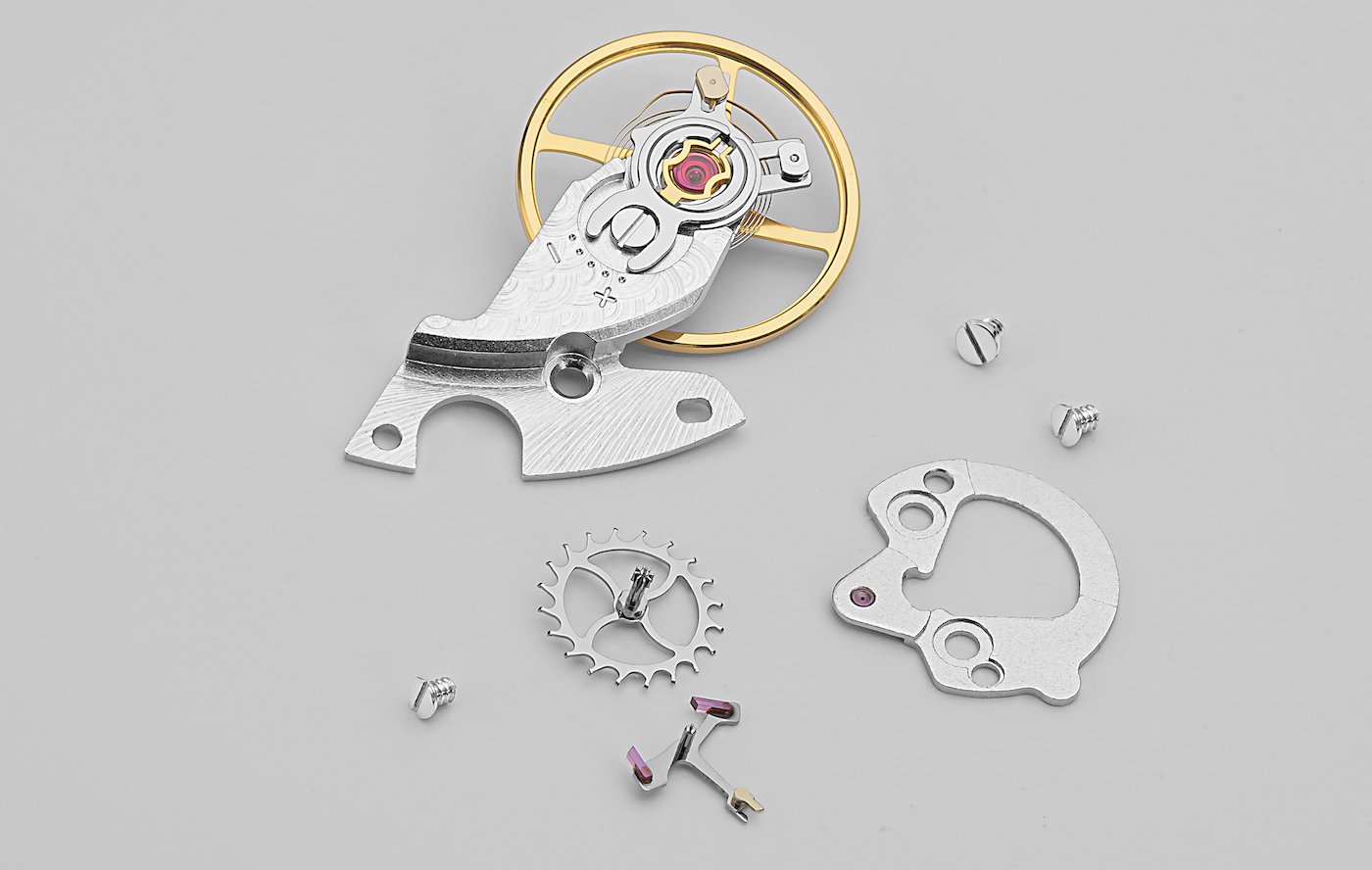 It has taken both time and considerable investment, but perseverance has paid off with the new automatic calibre P-331-MH, 100% produced in the Jura Valley, that drives the brand’s flagship collections today.

Recently conceived, the new-generation calibre P-331-MH benefits from substantial modifications compared to its predecessor. The teeth of the escape wheel have an improved surface finish and the pallet is fitted with superior quality rubies for higher performance and to guarantee an impeccable degree of reliability. Furthermore, the new lubricating system of the reversers allows for the optimum performance of the bi-directional winding system. The balance-wheel is also fitted with a double-cone Incabloc® shock absorber that increases protection against impact.

The combination of these mechanical upgrades has permitted calibre P-331-MH to obtain the Chronofiable® certification issued by the Laboratoire Dubois of La Chaux-de-Fonds. This certification assesses the operational reliability of a product using accelerated cycles of ageing that best reproduce real-life conditions of the wearer. 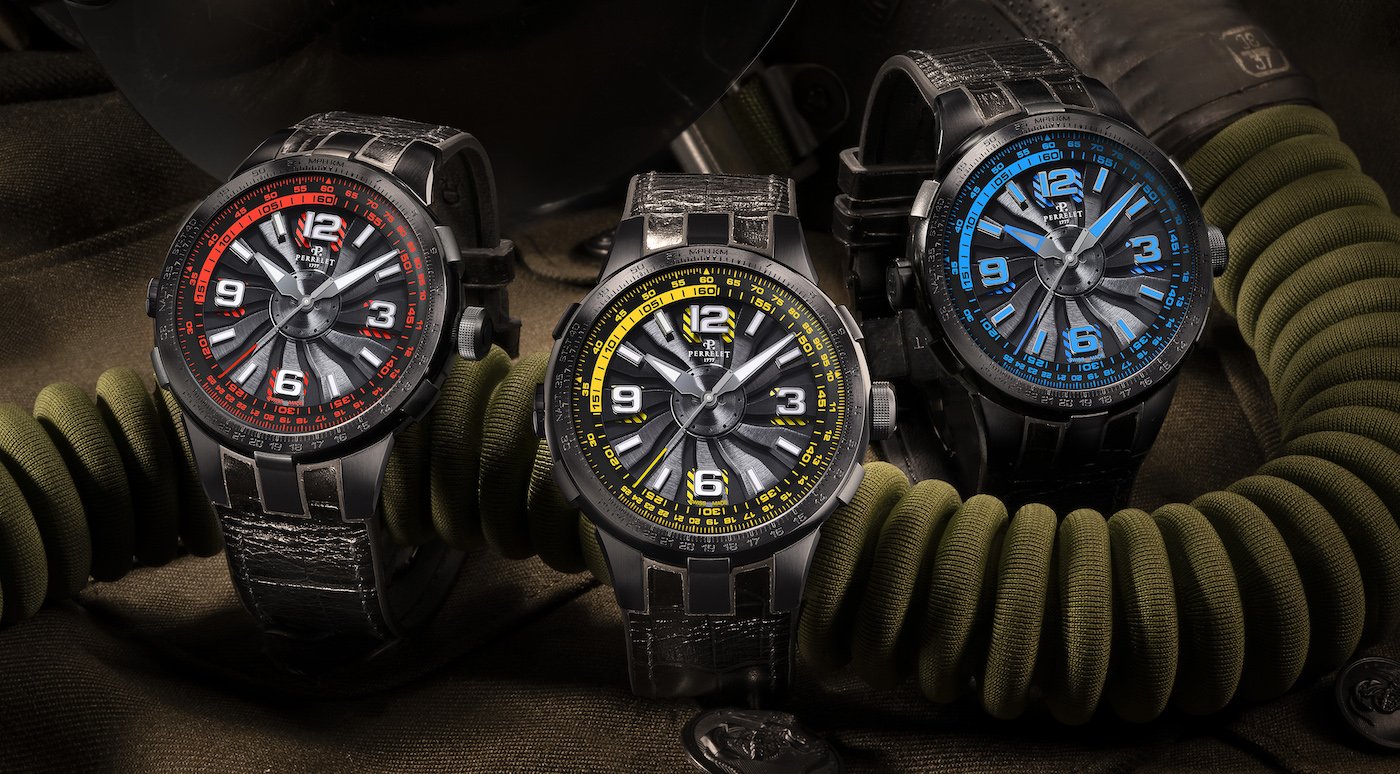 The movement has also been subjected to traction tests on the crown stem, on its level of resilience to accidental shocks (free-fall test at violent impact of up to 5000G), as well as exposure to thermal cycles at significant temperature’s variations and magnetic fields, to name but a few. Furthermore, the watches have successfully passed the usual water-resistance tests. Having passed these tests with flying colours, the movement also boats the prestigious COSC-chronometer certification.

Perrelet has evidently undertaken this phase of brand renewal and renovation with great enthusiasm. This unwavering commitment to improvement can be appreciated in the recent Turbine EVO and Turbine Pilot Collections. 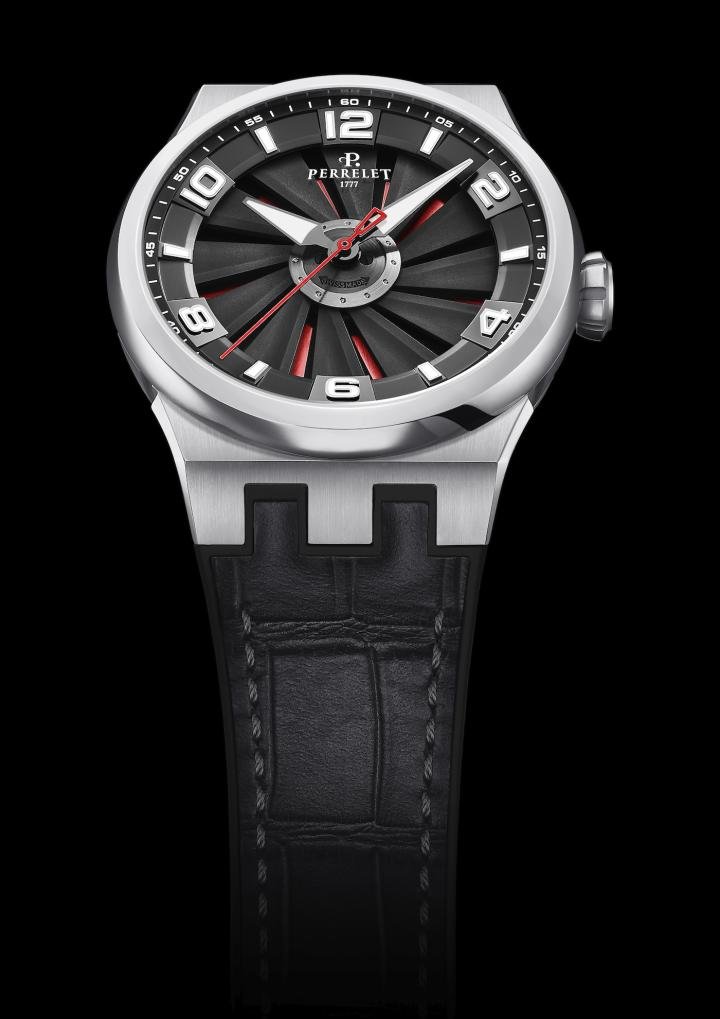 Perrelet’s news does not stop here, as the Manufacture will be introducing further interesting innovations throughout 2021. A new collection with a completely new manufacture movement will be unveiled soon.