Uniting European craftsmanship with Japanese art, the reverse side of the case celebrates Eastern art with an enamel miniature painting that faithfully reproduces a woodblock print of Kirifuri Waterfall made by Katsushika Hokusai in the early 1830s.

Uniting European craftsmanship with Japanese art, the reverse side of the case celebrates Eastern art with an enamel miniature painting that faithfully reproduces a woodblock print of Kirifuri Waterfall made by Katsushika Hokusai in the early 1830s.

or almost two millennia, a two-way cultural exchange between Asia and Europe has had a profound influence on every art form of both East and West – from the visual to the performing arts – as well as on techniques for producing textiles, glass and ceramics. This is an exchange that Jaeger-LeCoultre has embraced throughout the Manufacture’s history. Coinciding with 90 years of the Reverso, Jaeger-LeCoultre celebrates this ongoing cultural exchange with an exquisite new Reverso Tribute Enamel timepiece.

Uniting European craftsmanship with Japanese art, the reverse side of the case celebrates Eastern art with an enamel miniature painting that faithfully reproduces a woodblock print of Kirifuri Waterfall made by Katsushika Hokusai in the early 1830s. Kirifuri Waterfall is taken from A Tour of the Waterfalls of the Provinces, a series of eight woodblock prints depicting waterfalls that the artist visited between 1831 and 1833 in different regions of Japan’s main island, Honshu.

Embodying La Grande Maison’s creativity and its vision of the world of art and culture, the new timepiece is testament to the talent and skill of the artisans working in the Métiers Rares® (Rare Handcrafts) atelier within the Manufacture Jaeger-LeCoultre. 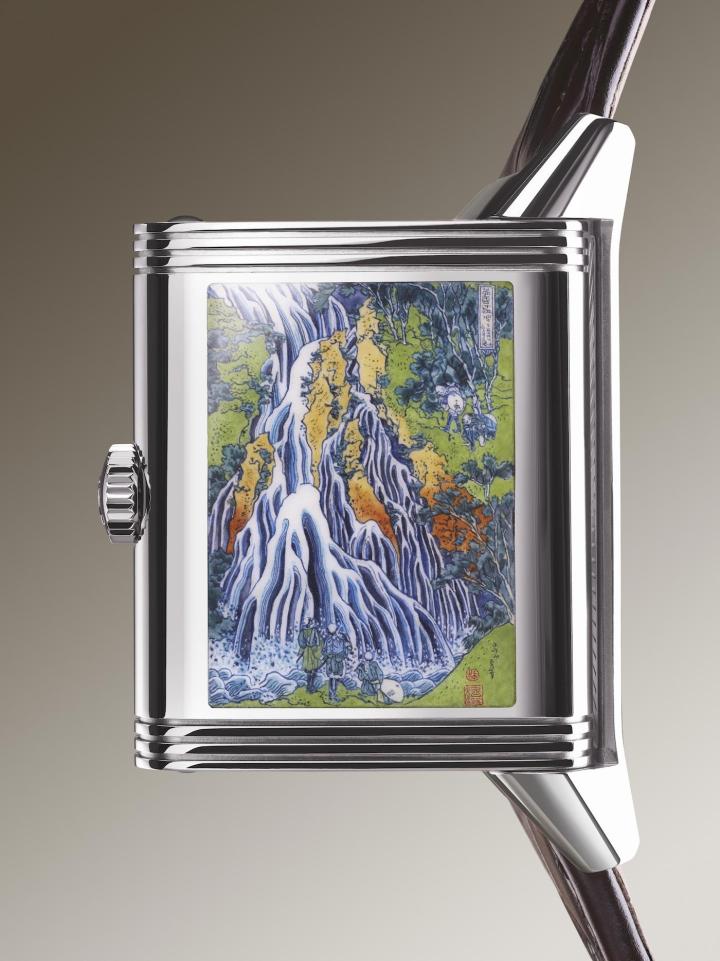 In a carefully orchestrated process beginning with the case back, the decoration of this timepiece presented many challenges that were particular to this work of art. First among those challenges was to reproduce a work measuring 37 x 24.5 cm onto a surface little more than one-tenth the size of the original – capturing every detail in perfect scale, including the group of tiny human figures at the base of the waterfall.

To express the power and beauty of the water as it cascades 100 metres down the mountainside Hokusai used a greater sense of perspective and bolder colours for Kirifuri Waterfall than in his previous work. The enameller had not only to mimic this perfectly but also to create the illusion of the woodblock printing technique, which produces a specific effect entirely different from enamelling. A particular challenge is that multi-coloured prints require the use of multiple woodblocks, with each different colour applied in turn – and there was the added challenge of reproducing the bokashi effect of subtly nuanced and graduated colours seen in the original. To achieve these illusions, Jaeger-LeCoultre’s master enameller had to develop her own technique. 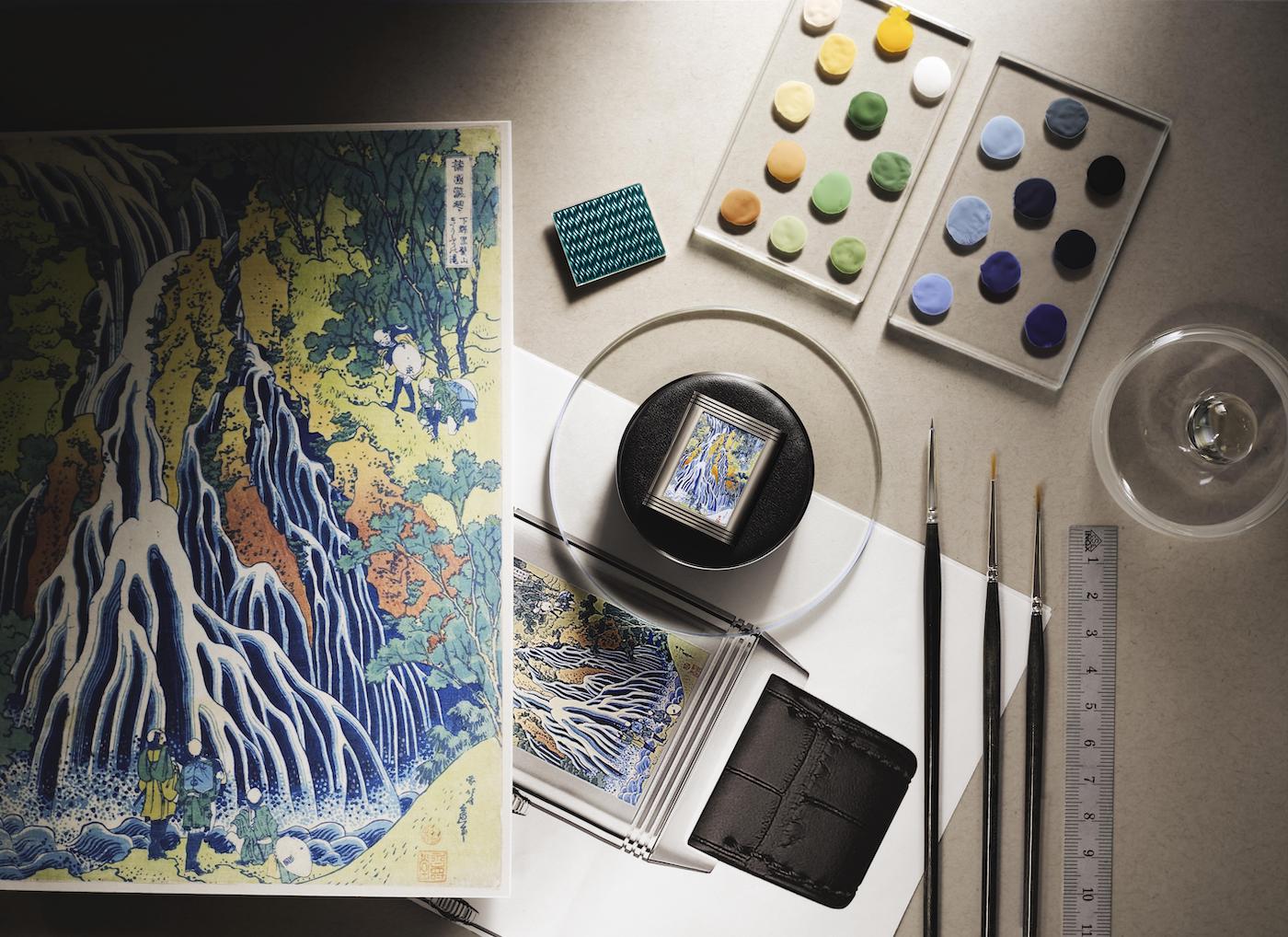 The simplicity of the Reverso Tribute dial – with its faceted appliqué hour-markers and Dauphine hands – places full value on the beauty of its decoration. An artistic response to the miniature painting on the case back, this dial is decorated with an unusual, wavy guilloché pattern chosen to echo the effect of moving water. Executed by hand, using a century-old lathe for which a special cam was tooled to achieve this particular pattern, the visual effect of the waves is amplified by layers of translucent grand feu enamel in a soft shade of green that exactly matches a detail of the painting on the reverse side. 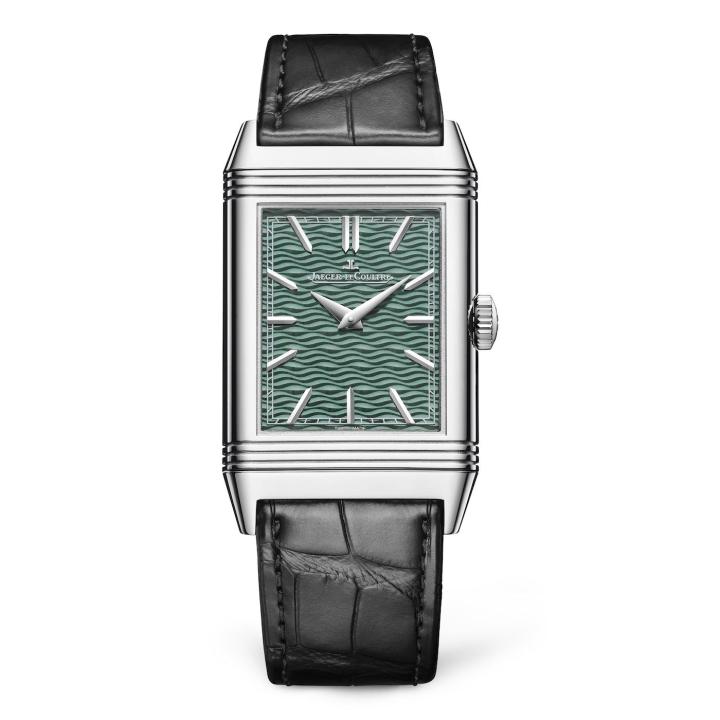 Following multiple firings to build up the enamel layers, the final challenge is the faultless application of the indexes (which requires tiny holes to be drilled through the pristine surface of the enamel) and the transfer of the chemin de fer minutes register. 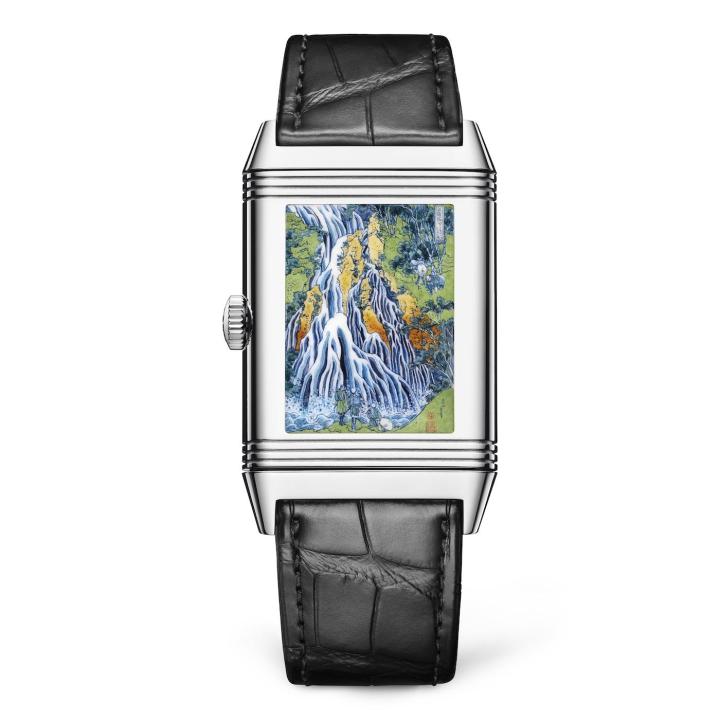 As with all enamelling, the firing process can change colours in unpredictable ways, so for both the back and the front of the Reverso Tribute Enamel Hokusai, many hours of research and experiment were required in order that the dial colour would perfectly match the painting on the reverse, and that the painting would give a faithful rendering of Hokusai’s original colours. In addition to these hours of research, almost five working hours must be dedicated to the guillochage alone, followed by eight working hours for the layers of translucent green enamel. More than 70 working hours are required only to paint the miniature masterpiece on the case back. 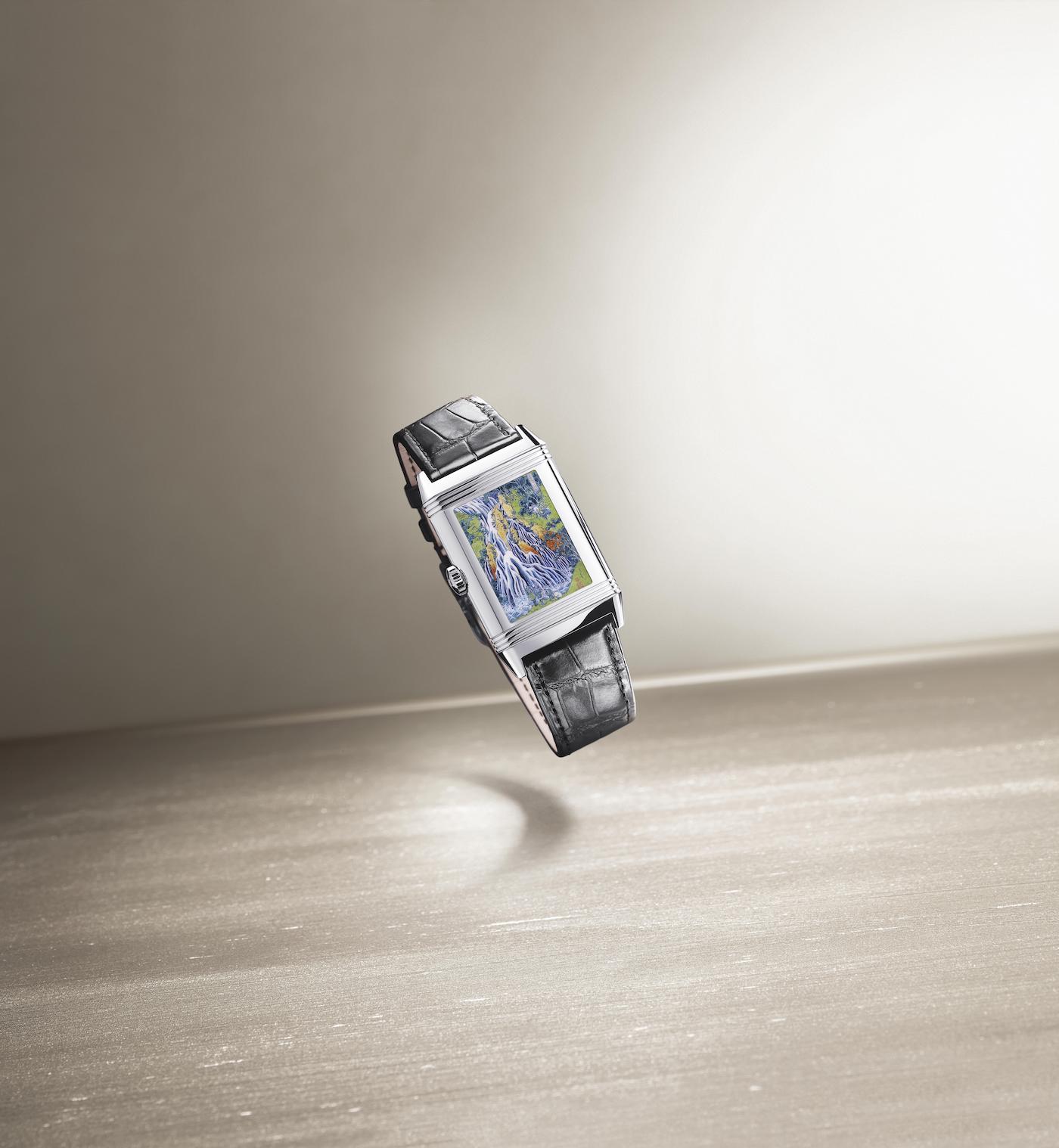 The Japanese artist best known in the West, Hokusai (c.1760–1849) was a highly prolific illustrator, printmaker and ukiyo-e artist. His fame was secured when he was in his eighties, by his monumental woodblock print series Thirty-Six Views of Mount FujiI, which includes The Great Wave off Kanagawa (Kanagawa oki nami ura), one of the world’s best-known works of art. (Jaeger-LeCoultre honoured that work by reproducing it as a miniature enamel painting on a limited-edition Reverso in 2018.)

Thanks to a craze for ukiyo-e painting, which depicted the hedonistic lifestyle of the merchant class in Edo Japan (1600–1868), woodblock printing flourished from the 17th to 19th Century, as a means of reproducing those paintings. Innovative in his composition and use of colour, Hokusai was instrumental in transforming ukiyo-e from a style of portraiture into a broader genre that included landscapes, plants and animals. As a consequence of his fame, ukiyo-e and woodblock prints became central to forming the West’s perception of Japanese art.

TIME.KEEPER This timepiece is the result of a genuine challenge issued to De Bethune by the American star Swizz Beatz. Denis Flageollet and his team came up with a (...)