The independent Swiss watch brand enriches its Klepcys collection with a new chronograph model. Christened “Klepcys Dice”, it is presented in two different versions in limited editions of 50 pieces each.

The independent Swiss watch brand enriches its Klepcys collection with a new chronograph model. Christened “Klepcys Dice”, it is presented in two different versions in limited editions of 50 pieces each.
K

lepcys Dice is the acronym of Klepcys Double Independent Chronograph Evolution. As its name indicates, it is an evolution of the traditional chronograph.

Cyrus’ master watchmaker Jean-François Mojon has transformed it into a double chronograph capable of measuring two short intervals of time independently or in synchrony. However, it should not be confused with the rattrapante version, where the two hands track the time of two events that start simultaneously but end at different times or indicate an intermediate elapsed time.

The first reports of a double independent chronograph date back to 1873, when watchmaker Arnold Frankfeld registered the development of his ’Double-Stop Movements’ at the New York patent office.

Since its foundation in 2010, the driving force behind every watchmaking creation at Cyrus is the ongoing “Conquest of Innovation”. The bold and distinctive three-dimensional architecture that houses the atypical layouts of all Cyrus watches is only possible using cutting-edge technical solutions. These solutions also ensure excellent levels of reliability and precision. All these aspects come to life in exclusive limited-edition timekeeping instruments that stand out in the vast landscape of contemporary watchmaking.

Thanks to the brand’s independence, its swift decision-making process, its production autonomy and impressive watchmaking know-how, Cyrus is proud to present Klepcys Dice. Powered by an exceptional self-winding manufacture movement, Klepcys Dice is equipped with an unprecedented double independent monopusher chronograph. 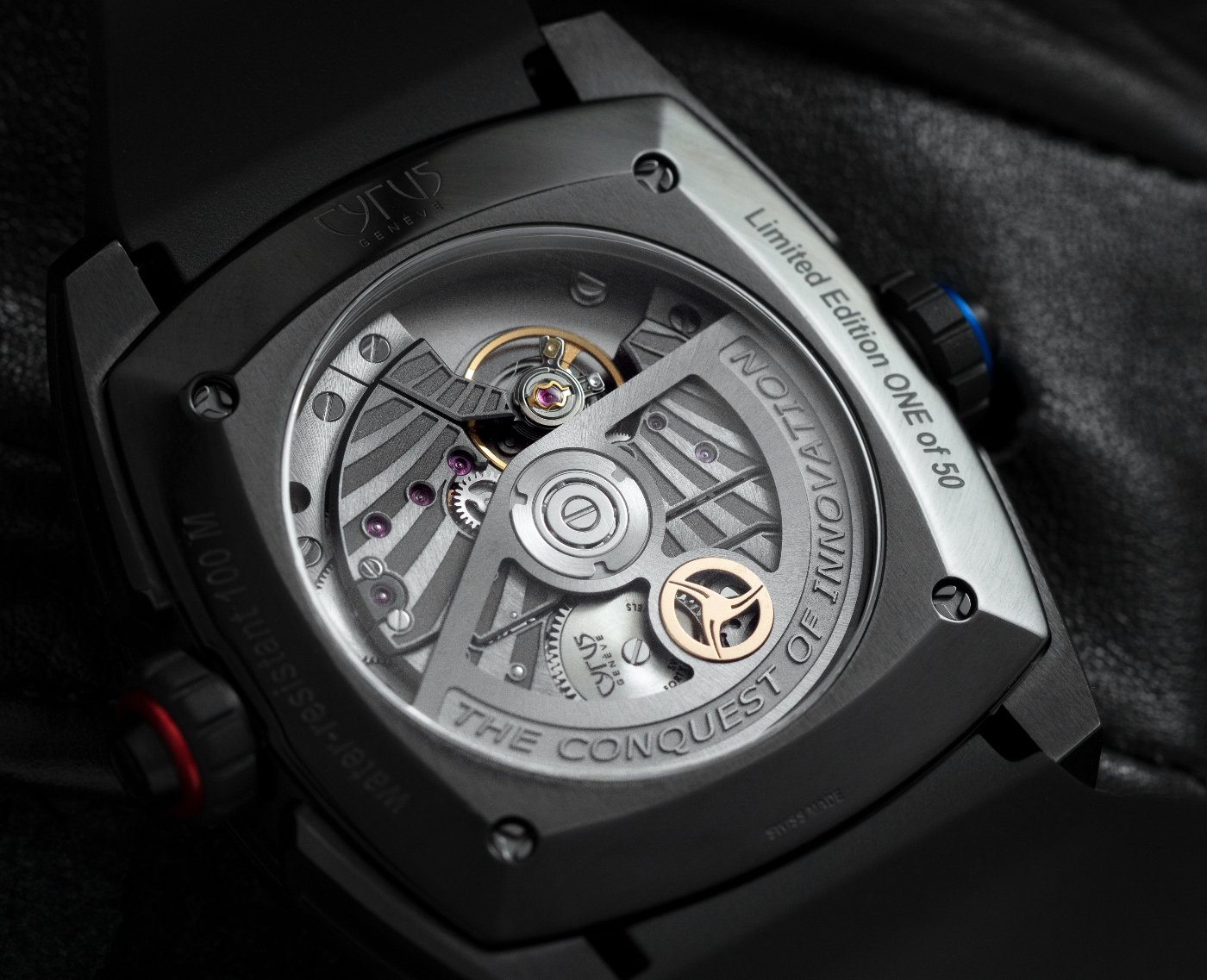 For Jean-François Mojon, the mastermind behind all Cyrus collections, the search for unique solutions that depart from classic watchmaking traditions are the way forward. The motivation behind the creation of Klepcys Dice comes directly from the world of sports with which Cyrus has a very special relationship, being “Official timekeeper and Watch partner” of the Uralkali Haas Formula 1 Team.

As Mojon explains: “This modern chronograph is the result of a deep reflection on the role of timing in sports competitions. In many sports, it is often important to measure elapsed times with different starting times. This occurs, for example, in races like marathons or biathlons where athletes do not cross the starting line at the same time or even in Formula 1 - a world very close to Cyrus - where two drivers, during the race tests, start at different times. In events like these, where the starting time is different for every sportsman, the Klepcys Dice chronograph can measure the times between two consecutive runners or racing drivers. A similar situation arises in car rallies, where it is common to use two independent chronographs. Our latest timepiece facilitates this operation thanks to the two monopusher crowns, which are essential to avoid any unwanted manipulation.”

Klepcys Dice comes in a distinctive 26-part cushion-shaped case. With a diameter of 42 mm and a thickness of 16.5 mm, the case is water-resistant to 10 ATM/100 m. 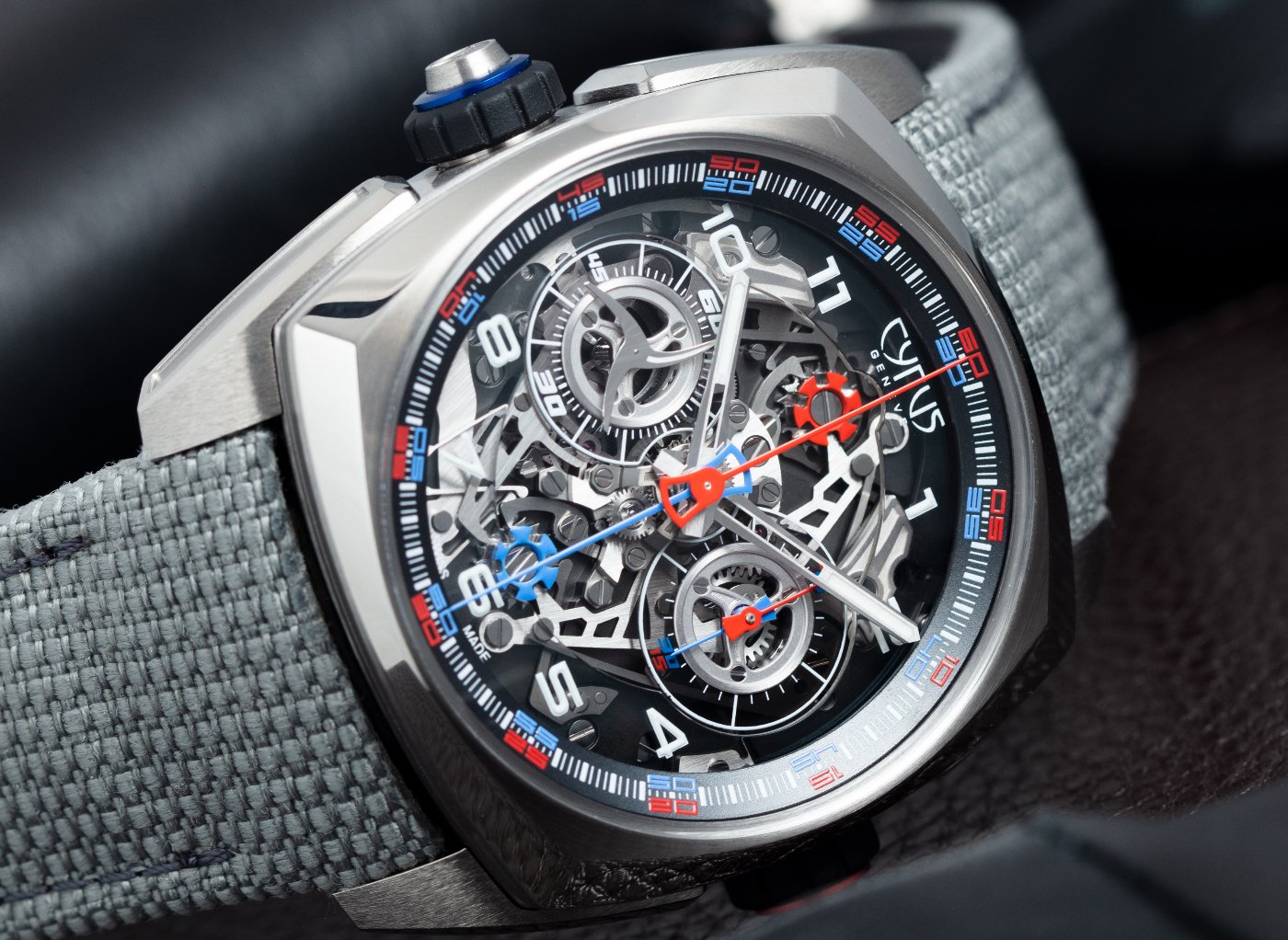 The twin crowns are equipped with a pusher that sets the three chronograph functions (start/stop/reset). Both are fully functional and embellished with the brand’s helix logo and distinguished by either a red or blue anodised aluminium ring to select which chronograph is going to be activated. The hallmark rubber ring to ensure a better grip of the crown when winding or setting the time is also featured on the Klepcys Dice.

Thanks to the open-worked architecture, the prestigious mechanics that powers Klepcys Dice command centre stage on the dial.

The two column wheels are highlighted on the dial. Picked out in bright red and electric blue lacquer, they are placed at 12 and 6 o’clock, respectively. The unusual arrangement of the chronograph mechanism on the dial side reveals the motion of the finely decorated wheels, levers and gears mounted on a double mainplate with a black microbeaded PVD treatment. 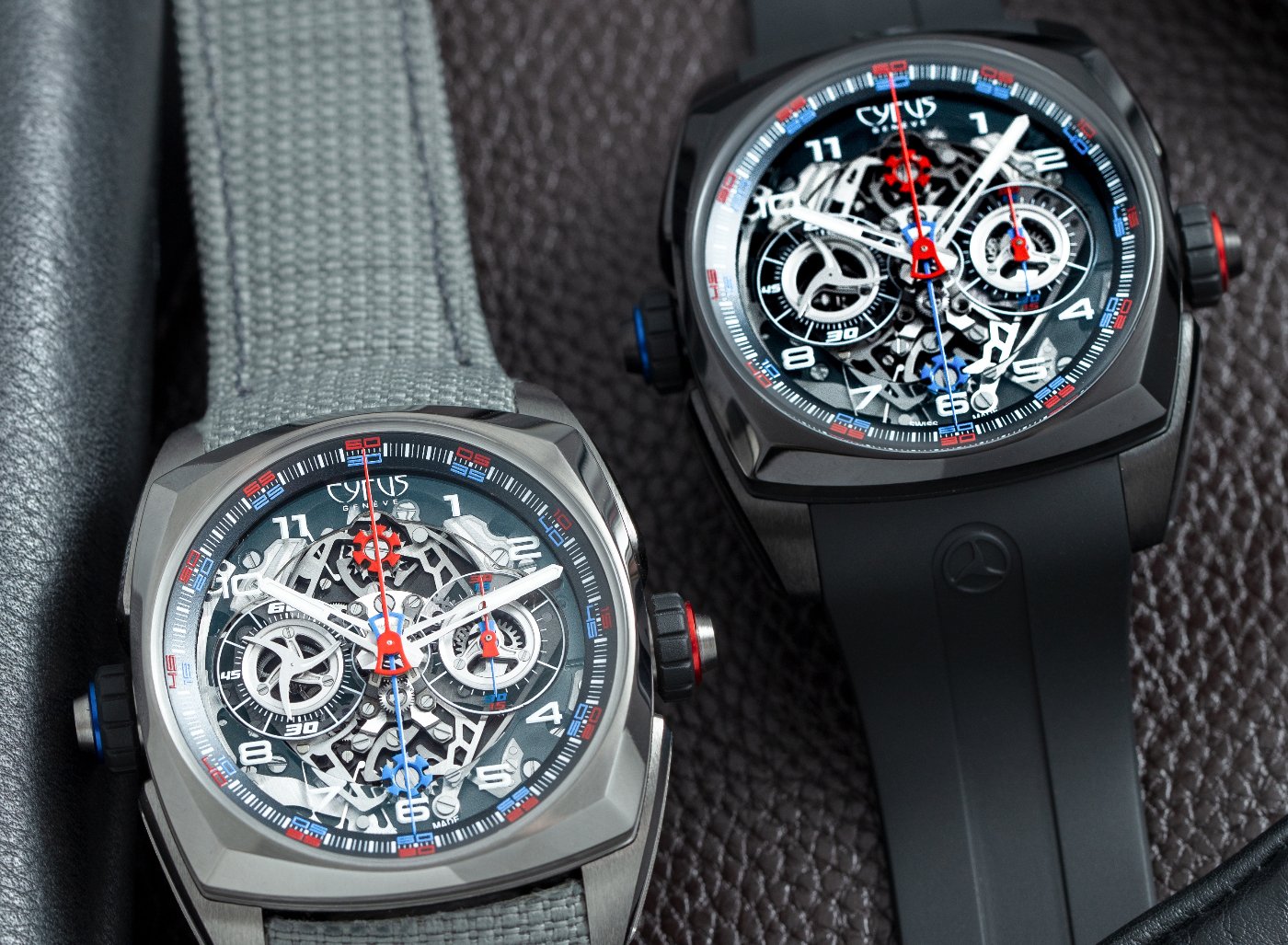 A host of sapphire crystal elements on the dial offer an unhindered view of this extraordinary calibre. The large sapphire crystal ring corresponding to the time is anti-reflective and features Arabic numerals in relief with white Super-LumiNova that emits a blue glow. The sapphire ring, with its bevelled and polished profile, is cut to make room for the chronograph counter, the small seconds and the two column wheels.

The dimensions of the small seconds at 9 o’clock and the counter corresponding to the two independent chronographs at 3 o’clock are generous to enhance legibility. Both counters are crafted in smoked sapphire crystal and fixed to a bridge carved in the shape of Cyrus’s logo. The rhodium-plated microbeaded helix is decorated with circular satin finish and doubles up as an original seconds hand with a luminescent tip.

The 30-minute chronograph counter at 3 o’clock – the star function of Klepcys Dice – is equipped with two vertically aligned hands in red and blue. Thanks to the bold colours, reading the two elapsed times is instantaneous. The independent hands track a graduated scale with markers at 15 and 30 minutes in alternating red and blue. The same red and blue colour scheme is used for the two central seconds hands, each measuring a different length. The reason that the hands differ in length is because they track the seconds on a slightly convex flange printed with two parallel scales graduated every 5 seconds and picked out in red and blue. 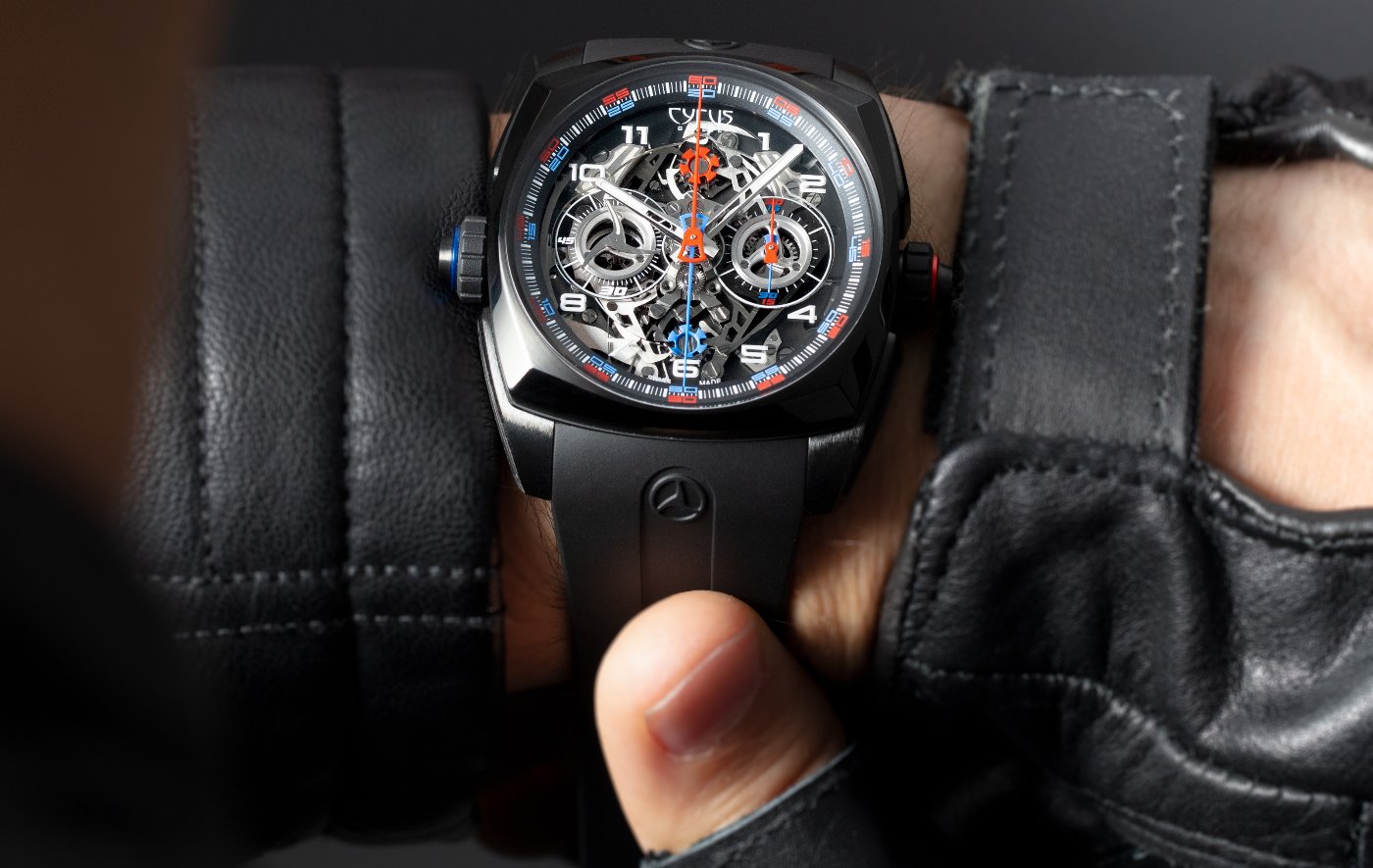 The meticulous attention to detail on the dial of the Klepcys Dice extends to the reverse side of the case. Thanks to a sapphire glass case back, the decorative flourishes on the NAC-treated bridges can be admired. Decorated with an embossed sunray pattern, the bridges display satin-brushed and polished surfaces. The design of the open-worked monobloc rotor is new and features a galvanic grey NAC coating and a sunray finish. The rotor is engraved with the motto “The Conquest of Innovation” and adorned with an 18k 4N gold helix.

Klepcys Dice is presented with a grey Cordura fabric strap with a titanium folding clasp to match the case material and is delivered with an additional black rubber strap.