ver since its launch in 2015, Czapek & Cie has sought to maintain a delicate balance between high-end mechanics and refined aesthetics. The brand new Antarctique Rattrapante, a split-second mono-pusher chronograph with a unique, dial-side mechanism, embodies these ideals. “The Antarctique line was released in 2020 as the epitome of sporty elegance,” says CEO Xavier de Roquemaurel. “It was calling for a complication that would amaze our aficionados.”

The roots of the project trace back to the founding of the company, Xavier explains. “In 2012, we launched a limited-edition chronograph run on a small series of vintage Valjoux 7733 as part of the re-registration of the name Czapek, and then sold a few pieces to friends as a way to raise funds for the project.” One buyer noted the hypnotic beauty of the cams as they pivoted. This sparked the idea of making a Czapek chronograph with the mechanism exposed on the dial side. 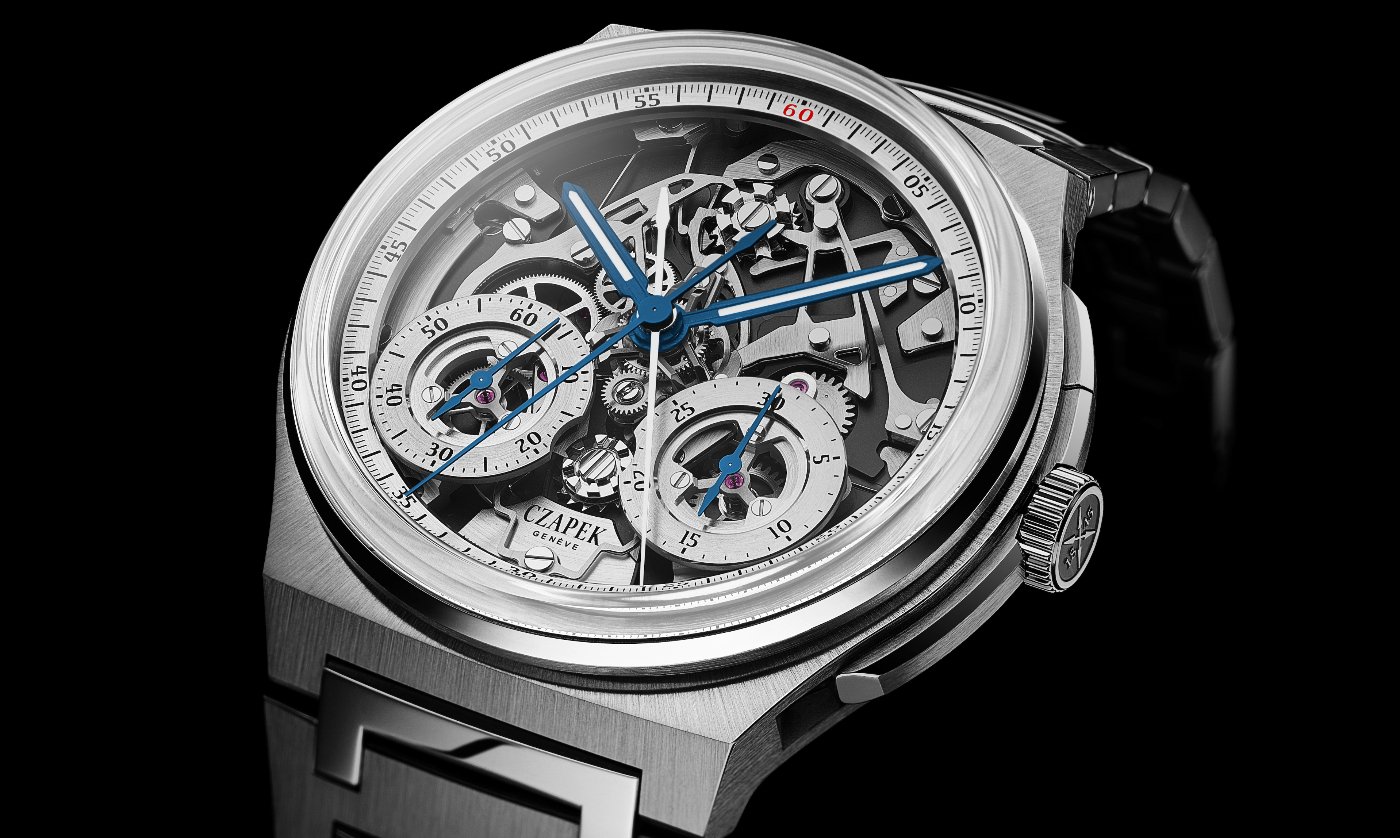 This was 2015, and good concepts often take time to mature. The difficult equation of putting together creativity, R&D, and volume could not be resolved initially, however, over the years, the chronograph idea kept recurring. The eureka moment was a combination of serendipity and stubbornness. At one point the split-second idea emerged, while manufacturing partner, Chronode, was now ready to produce a viable split-second chronograph. “We loved the idea of being able to control time, stop it and then catch up”, says Xavier with a smile. “Plus, we would place this module on the dial side and give the wearer full visual access to the ballet of cams, levers and wheels.”

A split-second chronograph is, in fact, a quite complex mechanism, a grande complication, the pinnacle of mechanical creativity. The most noticeable element is the clamp, which will instantly immobilize one of the chrono wheels when the split-second pusher is activated. Meanwhile, the other chronograph hand must continue its time-counting undisturbed. When the clamp is released, the immobilized hand will “catch up “ (rattraper in French) to its companion. Each part must be manufactured to the highest specifications to ensure absolute precision. 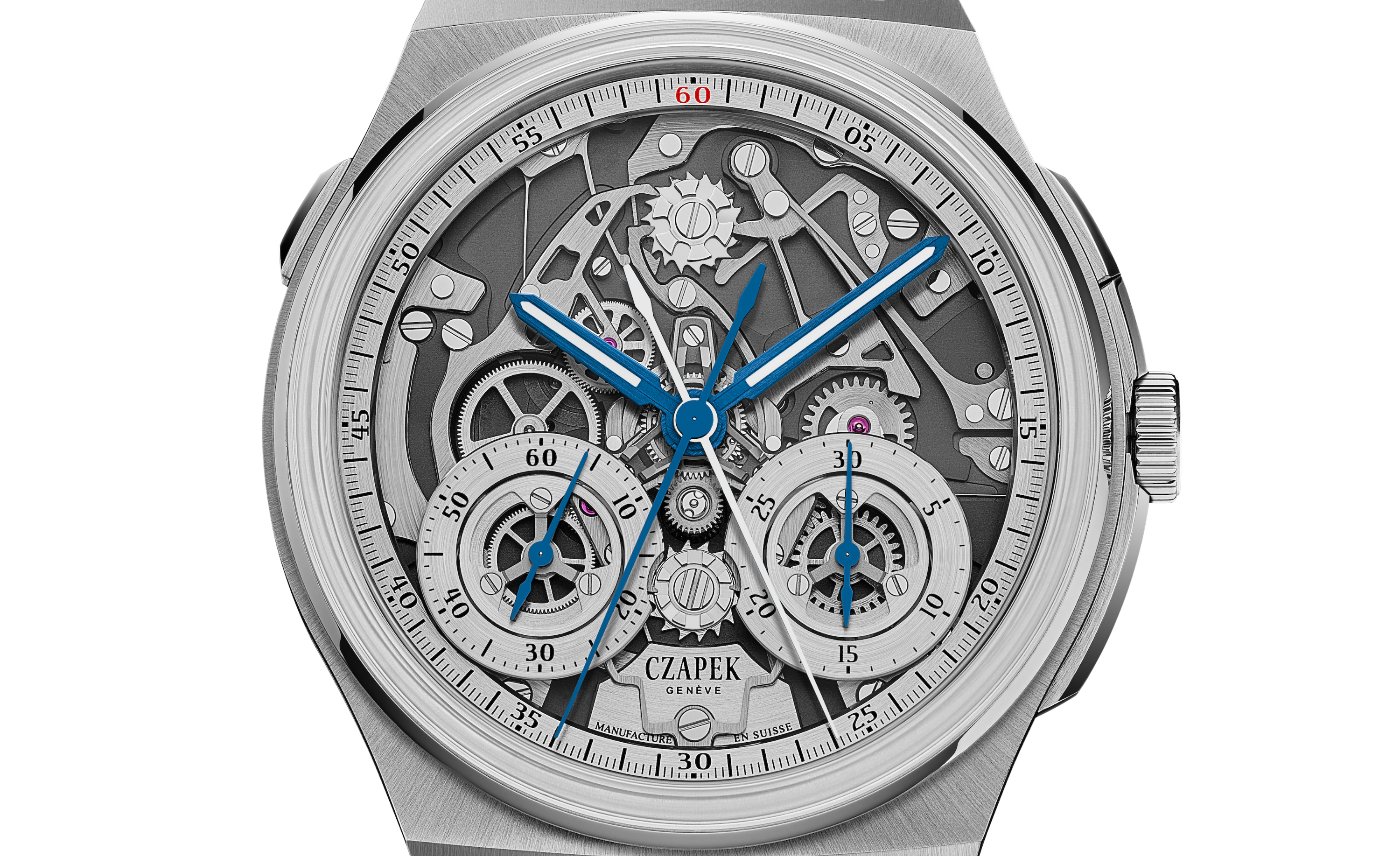 A glance at the SHX6, Czapek’s proprietary calibre created in collaboration with Chronode, is a work of art from the mechanical and aesthetic standpoint. For one, the number and thickness of the main components had to be reduced to make sure the timepiece would keep its streamlined look and feel and fit well into the 42.5-millimeter case. “As with the classic chronograph, the split-second runs on energy tapped from the second wheel,” explains Xavier. “This time, we favoured a horizontal clutch rather than a vertical one to highlight the aesthetics of the transmission”.

The focus of the movement is the tripod bridge in the centre that holds down a patented satellite minute train and the patent-pending split-second mechanism just below. The two column wheels, one at the top (for the chronograph) and the bottom (for the split-second mechanism) divide the movement into two halves. The minute totaliser at four o’clock and the small seconds at seven o’clock serve as visual anchors to this high-flying, modern and dynamic timepiece, and maintain the link to the company’s spiritus rector, the great nineteenth-century watchmaker, François Czapek, who was using vertical symmetry as a visual guide. 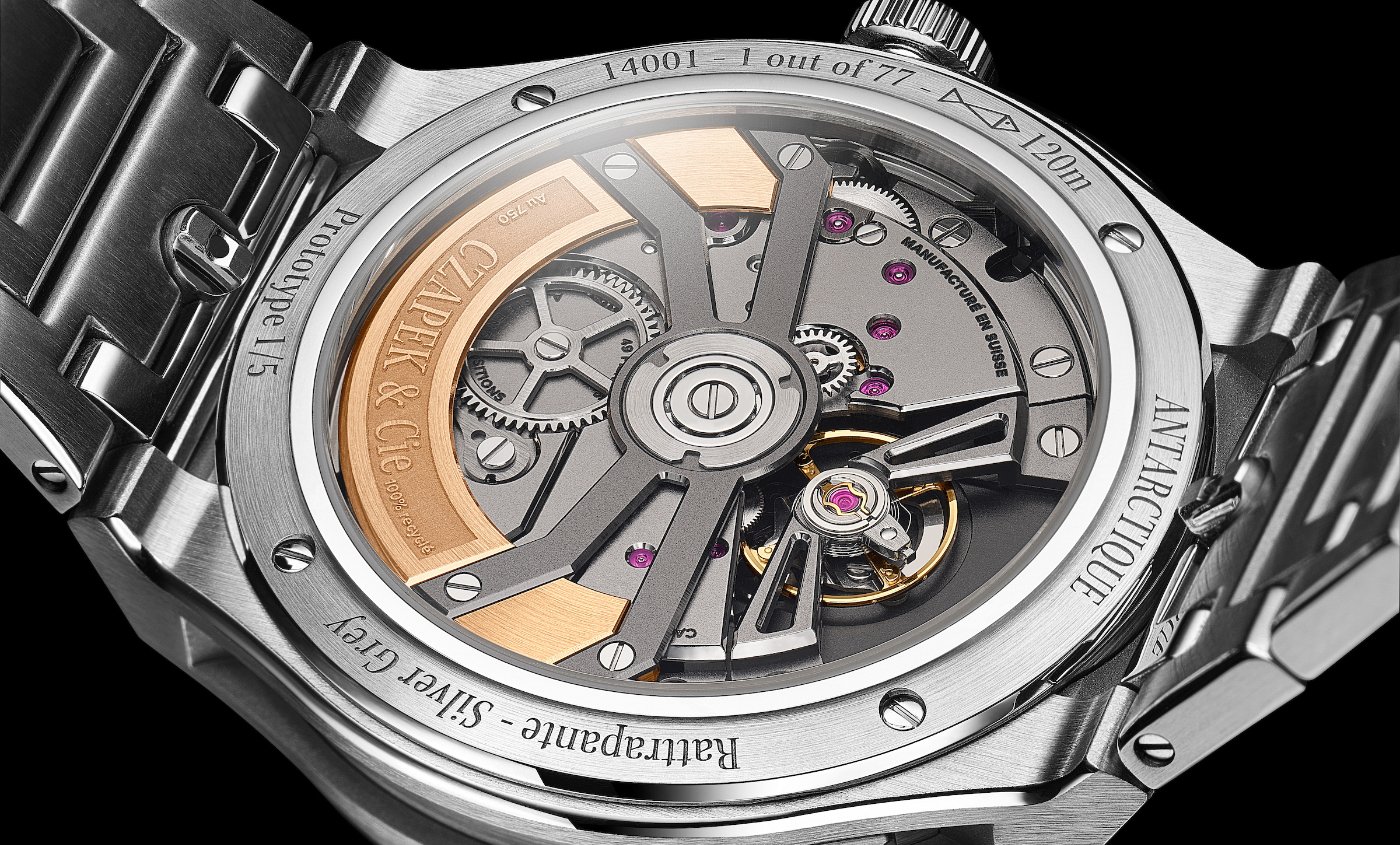 The Antarctique Rattrapante comes with Czapek’s bespoke stainless-steel bracelet, whose links are shaped as a stylized letter C. It is available at the brand’s boutique in Geneva, official retailers and online at Czapek.com as a subscription in a limited edition of 77 pieces.