The brand introduces the second of its Urban Art Tribe timepieces with the Excalibur Gully Monotourbillon.

The brand introduces the second of its Urban Art Tribe timepieces with the Excalibur Gully Monotourbillon.
G

ully, the French graffiti-turned-studio artist, follows the path started by Dr. Woo after being granted access to Roger Dubuis’ most important room: the manufacture itself. Taking on the same creative challenge to reinterpret the astral signature of the iconic Excalibur Monotourbillon, he presents his vision of the star by uniting it with his colourful world of graffiti.

Extravagant, determined and disruptive, Gully is as bold and bright in his ideas as Roger Dubuis. Having created a name for himself graffitiing throughout France in the nineties and noughties, he left the streets behind to maintain his anonymity. Now he works in a studio and exhibits his work at respected galleries.

Master of appropriations, Gully’s art combines all movements, from hyperrealism to pop art, as well as surrealism and cubism, to create facetious and narrative masterworks that travel the history of art as if seen through a child’s eyes. Talking about his craft, Gully says: "Bringing different worlds together is my trademark. This project has that ethos at its core, making it an obvious collaboration for us both.”

Never one to shy away from a challenge, Roger Dubuis made the decision to recraft and reshape its own work of art – the Excalibur Monotourbillon – earlier this year. Through the exceptional skill and ingenuity of its watchmakers, the perfect conditions were created for the Urban Art Tribe collaboration. The use of clean cut lines on both case and movement as well as modern and technical materials not only raises the timepiece to an even higher standard, but also makes it an exciting canvas for creativity. In providing this pure, versatile space, it becomes the playground on which Gully expresses himself.

Gully unites two worlds into a new singular masterpiece by combining the Maison’s high watchmaking expertise with his fun artistic flair. Consciously appropriating the astral signature and merging it with his graffiti, the star is lifted to new heights by his style. As a nod to his very first street works, Gully’s lettered tag uses the famous single-line technique. Starting from the centre of the timepiece, his hand moves straight towards 11 o’clock, drawing the preliminary draft of a G. The line then heads towards 3 o’clock, but changes direction half-way to partially design a Y.

Finally, the line reaches 9, then 12, 6 and 3, before it moves to the centre of the tourbillon and across to 4 o’clock. Returning the line to the centre, it becomes clear that two L’s have been drawn. He finishes the run by drawing a U partially around the tourbillon. Look carefully at the letters born out of this continuous movement as the artist not only reinterprets the Roger Dubuis star but also signs the dial. Look closer still and it becomes apparent that two new stars have been created, levitating in parallel harmony on the top left and bottom right of the dial. From a single line to a singular masterpiece. 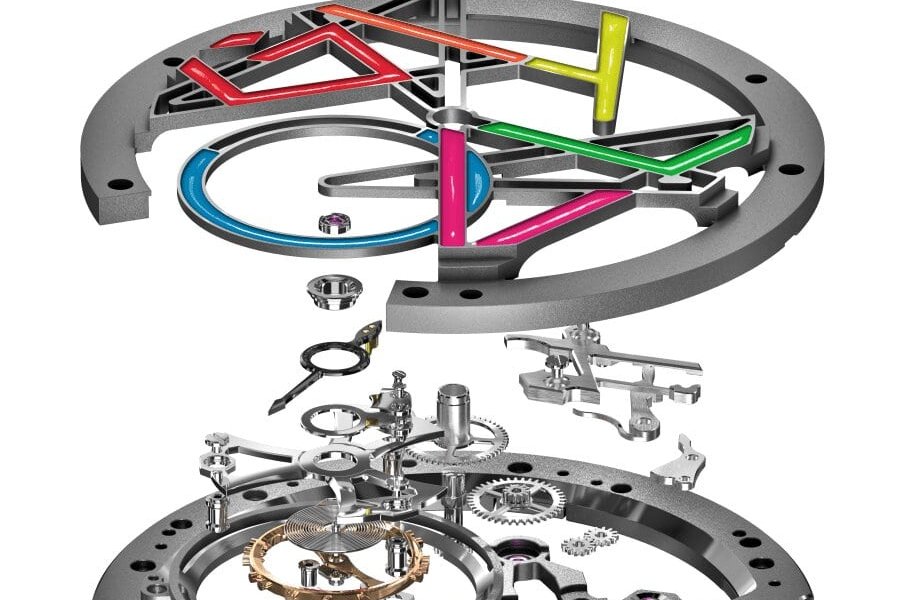 Inspired by the spray paint used in urban art, the Maison’s watchmakers filled the letters with luminescent coloured lacquer while the hour markers and the hands are filled with Super-Luminova™. The bright modern shades recall the artist’s universe, while creating aesthetic harmony and a one-of-a-kind finish. Imbued with a further technical feat, the Excalibur Gully Monotourbillon glows under UV light as the Maison’s obsession with luminescence shines through.

Gully adds: “To collaborate with expert craftsmen in industries that I am unfamiliar with helps me grow in my understanding of the world – and of art itself. Together we have created something singular, entirely new, and inimitable.”

The watchmakers’ technical talent is further evident in the RD512SQ calibre itself. By reducing the tourbillon weight, the power reserve is radically optimised to 72 hours, providing the option of leaving the watch unworn over weekends. What’s more, to be sealed with a highly demanding signature in fine watchmaking – the Poinçon de Genève – requires the manual decoration of every component, as well as unexpected and antinomic decorations, such as sandblasted top surfaces and polished angles.

Underscored by rarity and limited to just eight pieces, the Excalibur Gully Monotourbillon is housed in a 42 mm Dark Grey dlc Titanium case and mounted on a black calf leather strap, interchangeable with a Quick Release System for ultimate comfort and flexibility. 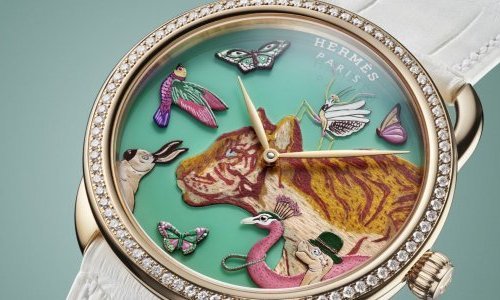 The new models were born from the lively pencil of English designer John Burton, who recently designed the Hermès Story silk scarf in the spring/summer 2022 (...)