In 2019, the very first Ultra Deep watches made history when they reached the deepest place on Planet Earth. In 2022, the technology that made the dive possible has been transformed into a collection available to the public. Water-resistant to 6,000 m (20,000 ft), the 45.5 mm range is led by a bold version crafted in sand-blasted and forged grade 5 titanium.

In 2019, the very first Ultra Deep watches made history when they reached the deepest place on Planet Earth. In 2022, the technology that made the dive possible has been transformed into a collection available to the public. Water-resistant to 6,000 m (20,000 ft), the 45.5 mm range is led by a bold version crafted in sand-blasted and forged grade 5 titanium.
A

true pioneer in the maritime field, Omega’s ocean story began with the “Omega Marine” in 1932 - the world’s first divers’ watch available to civilian divers. Characterised by its clever double case design, the superb water-resistance of that timepiece became sought-after by ambitious explorers and paved the way for Omega’s diving future.

With the release of the very first Seamaster in 1948, Omega’s passion for the sea was reignited, leading to the launch of the Seamaster 300 in 1957 - Omega’s first professional divers’ watch. Many legendary Omega dive watches have followed since then, including the distinctive Seamaster 600M “Ploprof” and the Seamaster 1000 for major explorations, as well as the popular Seamaster Diver 300M - worn by Commander James Bond since 1995.

As a consolidation of Omega’s impressive ocean experience, the original Ultra Deep arrived in 2019. To survive the toughest conditions, the forward-thinking watch included indestructible features, such as a case completely machined out of forged grade 5 titanium, robust “Manta Lugs” that provided an innovative way of securing the watch, and a sapphire face with a conical loadbearing design inspired by a submersible’s viewport. 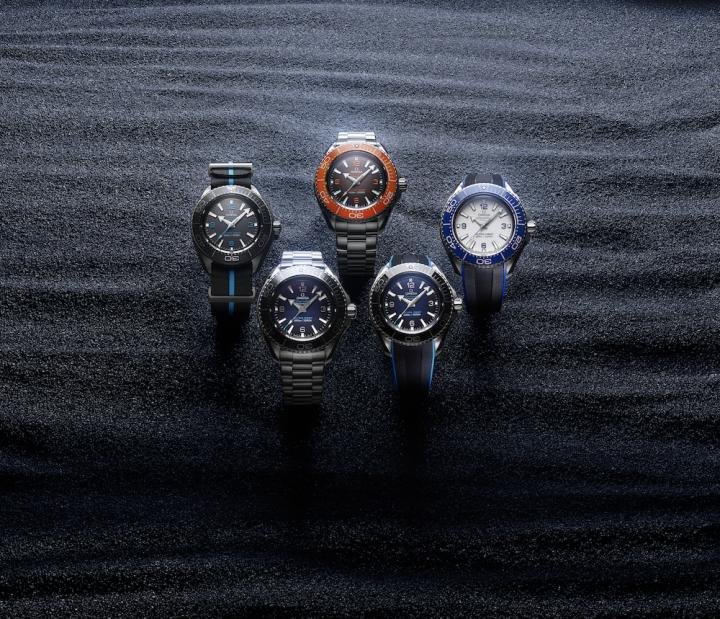 In April of that year, three Ultra Deep watches joined explorer Victor Vescovo on a mission to the bottom of the Mariana Trench in the Pacific Ocean. Originally recorded as 10,925 m (35,843 ft), the depth was later updated to 10,935 m (35,876 ft) and is the deepest any human or watch has ever dived. Two of the Ultra Deep watches were attached to the submersible’s robotic arm, while another was strapped to a data-gathering unit known as a Lander. Thanks to their ingenious build and design, all three watches completed the 12-hour dive without a problem and surfaced completely unscathed.

Taking the next step in state-of-the-art ocean design, 2022 sees the release of seven new models: the Omega Ultra Deep collection. Water-resistant to 6,000 m (20,000 ft), the 45.5 mm range is led by a bold version crafted in sand-blasted and forged grade 5 titanium.

To achieve its unique personality, the watch features a brushed ceramic bezel with a LiquidmetalTM diving scale, along with the distinctive “Manta Lugs” and streamlined asymmetrical case that are reminiscent of the original Ultra Deep model. They support a striped NATO strap, in cyan and black, made from polyamide yarn, sourced from 100% recycled fishing nets. Fixed to the wrist with a loop and buckle in grade 5 Titanium. 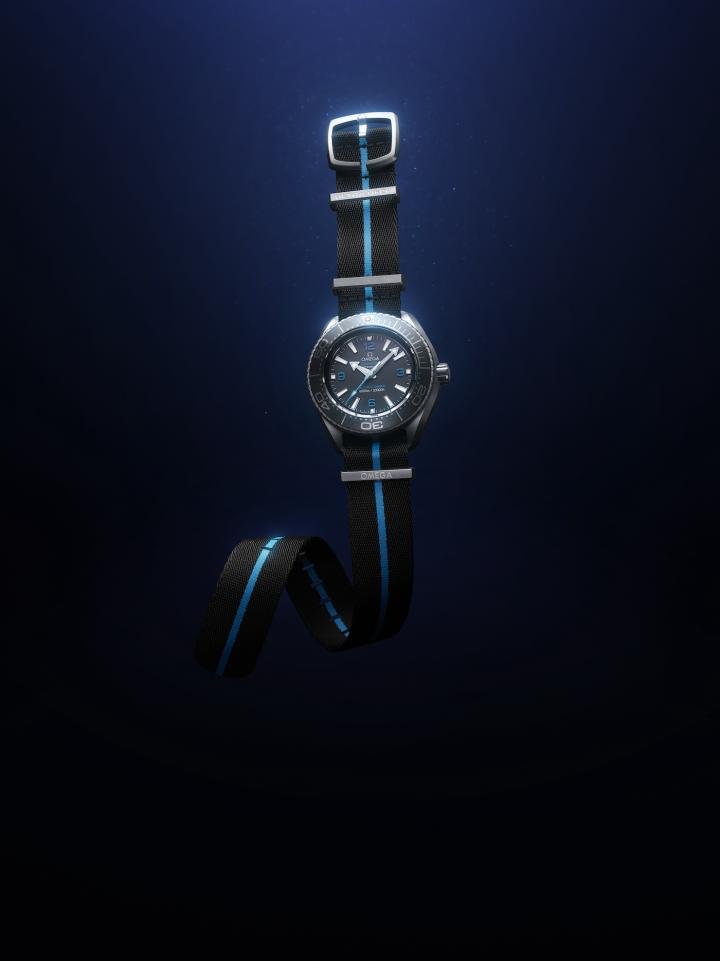 Beneath the protuberant and domed sapphire crystal, the dial has been produced in black ceramised titanium with cyan numerals and a blued gradient on the central seconds hand. Turning the watch over reveals a grade 5 titanium caseback featuring a black laser-engraved Sonar emblem, with the iconic Omega Seahorse at its centre. The words “Divers’ watch 6000 m for saturation diving” are included to reaffirm the watch’s adventurous credentials.

Six models in the Ultra Deep collection have been built in brand new O-MEGASTEEL. This high- performance stainless steel alloy once again proves Omega’s leadership in the production of advanced materials, with qualities that surpass the normal standard. O-MEGASTEEL is notable for its superior strength, whiter colour and incomparable shine. It also offers exceptional resistance to corrosion for a longer-lasting appearance. 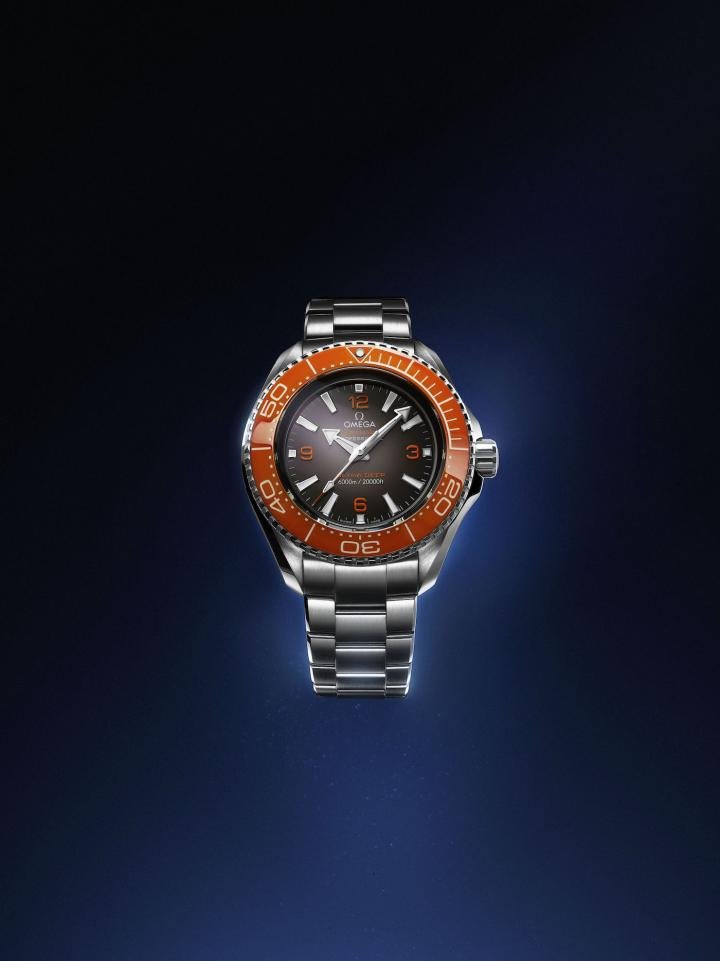 Mounted on each O-MEGASTEEL symmetrical case is a ceramic bezel with diving scale, as well as a protuberant and domed sapphire crystal, which is neatly bevelled and designed for maximum strength under pressure. A new crown guard is also integrated to the watch’s case, assuring protection when deep under water.

The choices include white or gradient-effect dials, which transition from grey-to-black or blue-to-black, and include a glossy finish as well as 18K white gold hands and indexes. Each piece includes a grade 5 titanium caseback with the same laser-engraved Sonar emblem and wording as the full titanium model. 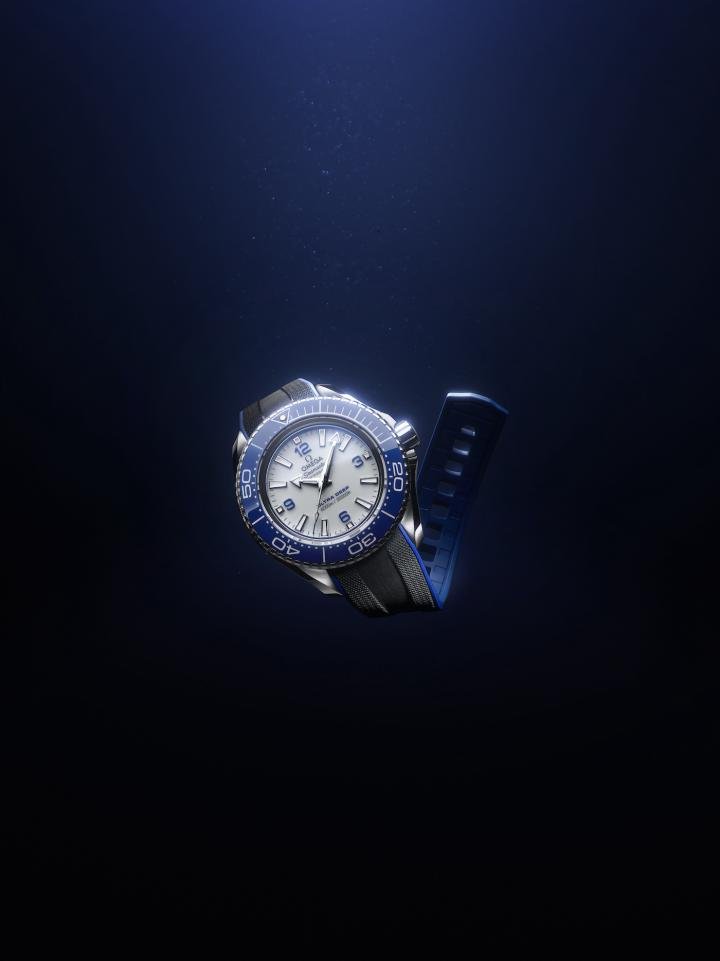 Each design is completed by either a rubber strap or an O-MEGASTEEL bracelet. The rubber straps feature a technical diving suit structure on the upper surface, along with an O-MEGASTEEL buckle. For the metal bracelets, OMEGA’s patented extendable foldover rack-and-pusher has been included, with a complementary length adjustment and an extra diver extension – perfect for use around a thick wetsuit. 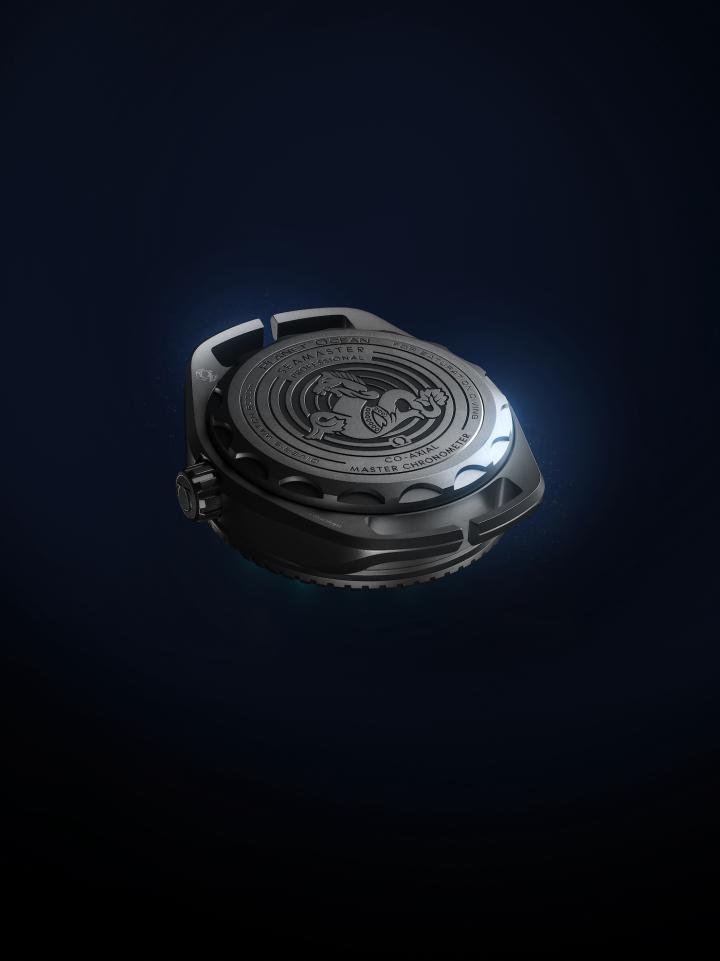 Driven by the Co-Axial Master Chronometer Calibre 8912, all watches in this collection are Master Chronometer certified at Switzerland’s highest standard of precision, performance and magnetic-resistance. What’s more, Omega’s Ultra Deep was ocean-tested at a depth of 6,269 m (20,567 ft) in the Mariana Trench in 2021.

The markings “For Saturation Diving” are included to meet the ISO 6425 standard for saturation divers’ watches which is certified by Switzerland’s independent testing body METAS - a premiere in the watch industry.