A new pivotal part of the HYT range, the Moon Runner is the bearer of a philosophy that combines the ambition of scientific understanding, the perfect accuracy of the lunar phases, and the dream of a new understanding of how lunar cycles are perceived.

A new pivotal part of the HYT range, the Moon Runner is the bearer of a philosophy that combines the ambition of scientific understanding, the perfect accuracy of the lunar phases, and the dream of a new understanding of how lunar cycles are perceived.
O

ne of the first known representations of the moon is Orthostat 47, a sculpture on a rock discovered in Knowth, Ireland, which scientists date back to the third century BC. Found by archaeologists on a clay tablet in the ancient city of Ugarit, in the Near East, the oldest written record of an eclipse viewing dates back to 1223 BC.

Babylonian astronomers developed understanding of moon cycles in the eighth century BC. From these initial milestones, understanding has only grown, and from the very beginning, watchmaking has contributed to the advancement of this knowledge.

Ultimate symbol of space travel, the journey to the moon has been a permanent wish list fixture since the first man set foot on it in July 1969. Even today, a certain number of realistic plans have been developed to open the doorway to space to a larger number of Earthlings. 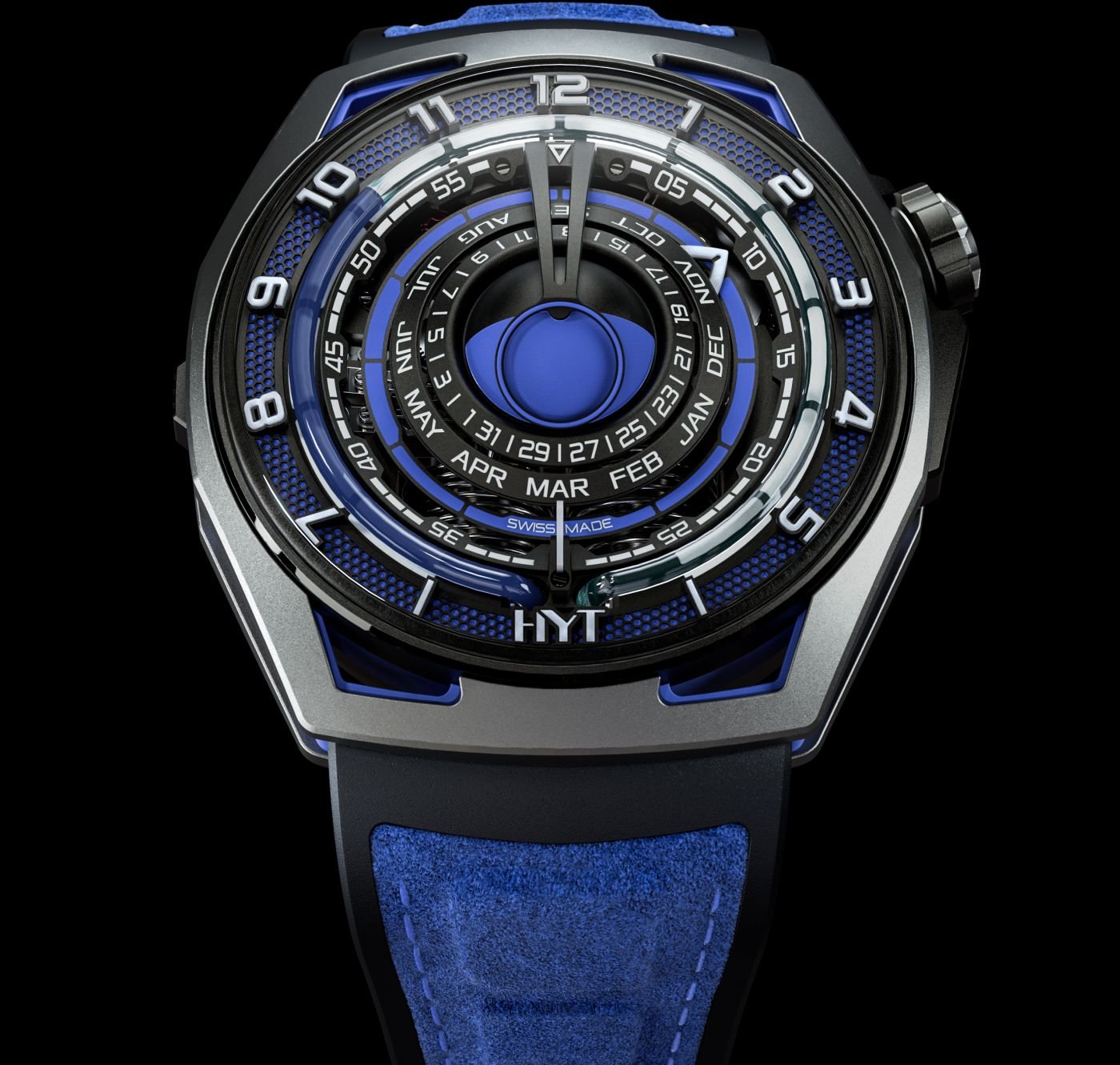 2022 marks a new stage in the understanding of lunar cycles with the launch of an original new indicator: the HYT Moon Runner watch designed by Davide Cerrato, CEO and creative director of the independent contemporary watchmaking company.

A new pivotal part of the HYT range, the Moon Runner is the bearer of a philosophy that combines the ambition of scientific understanding, the perfect accuracy of the lunar phases, and the dream of a new understanding of how lunar cycles are perceived. The representation of the moon is completely unprecedented, not only in its form, with the presence of the large celestial body, but also due to its central position at the heart of the technical measurement system presented by the timepiece.

“The form and unique shape are as important as the function”, says Davide Cerrato, HYT CEO and creative director. Around it are two titanium indicator disks that show the days and months, in addition to accurate time settings with a hand running on a customised graduation with a 5-minute timer, and retrograde hours shown by the fluidic system.

The HYT Moon Runner assumes its dual nature perfectly, as a fine watchmaking timepiece with clearly legible precision functions; it is also designed as a celestial vehicle capable of taking its wearer on an emotional journey to the moon.

Designed and produced by master Swiss watchmakers, this new iconic spacecraft from the HYT fleet joins the Hastroid. With its manual winding mechanical movement and cutting-edge equipment, it combines the classic sophistication of watchmaking knowledge and advances in science with its mecafluidic technique.

Sometimes described as the UFO watchmaker, HYT watches, with their style and enhancements, have brought a breath of fresh air to luxury watchmaking. Advances that are now clearly identified by the sharpest connoisseurs and collectors of extraordinary timepieces. The patented mecafluidic technology belongs to the Neuchâtel company, established in 2012. That year, the Grand Prix d’Horlogerie de Genève [Geneva Watchmaking Grand Prix] innovation prize rewarded the brand’s inventiveness.

The centrepiece of the mechanism lies in the fluid system, with two central “bellow” reservoirs, whose design unique to HYT creations reinforces the character and feeling of power, and the capillary surrounding the dial. For the Supernova Blue Moon Runner, the liquid used for the retrograde time indicator function is coloured a special “Supernova Blue”. 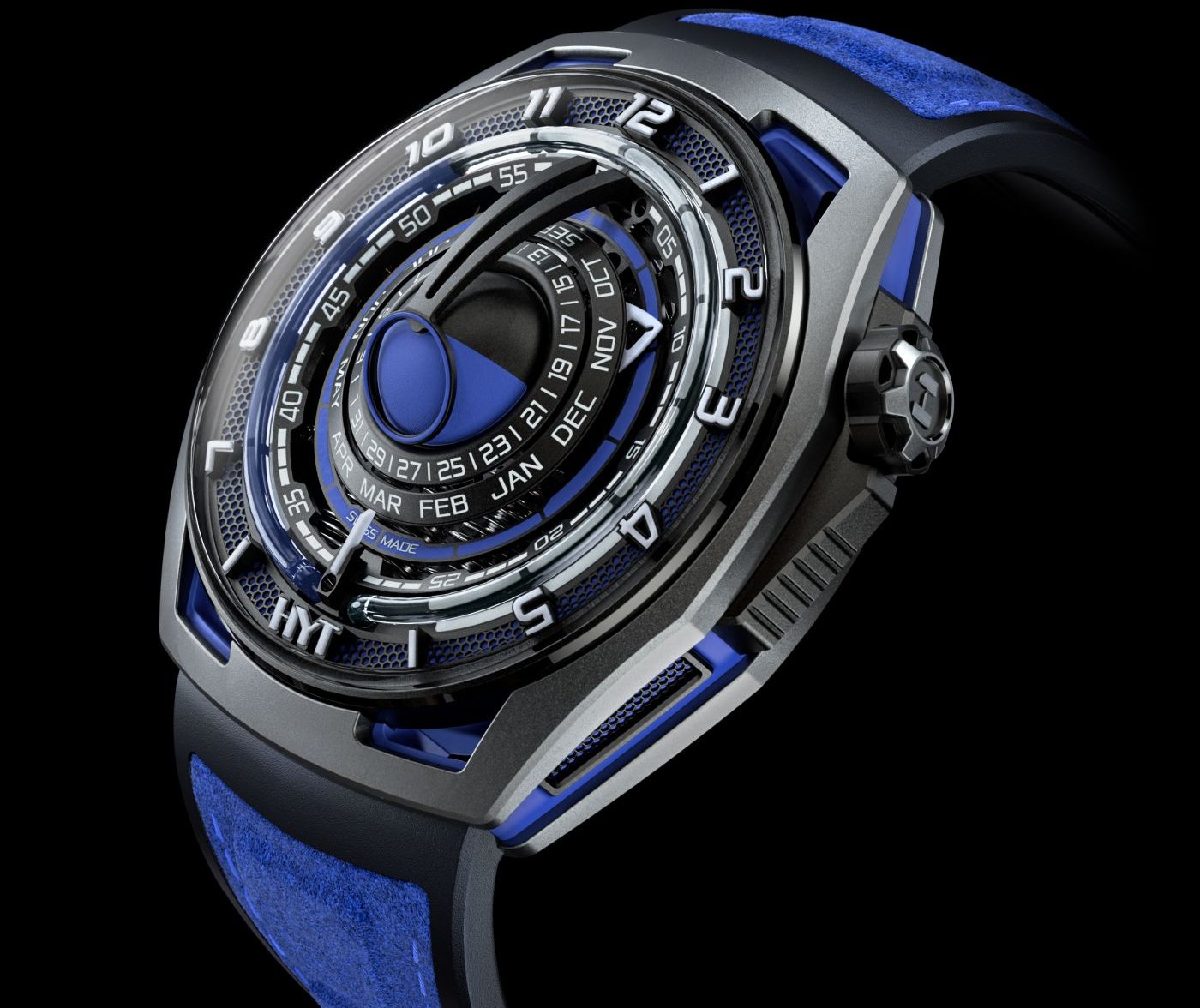 Blue is clearly not the most frequent colour in lunar observation. It is in fact the rarest colour. While “blue moons” certainly exist, astronomers use this term to refer to an “additional” full moon when this rare astronomical phenomenon occurs, giving 13 full moons in a year instead of 12.

Only 27 copies of the new HYT Moon Runner, with its unique and exclusive “Supernova Blue” colour, will be produced. A rare timepiece, intrinsically named for its uniqueness.

At the heart of the 48 mm diameter casing, 52.3 mm in length and 13.3 mm thick, made from grey and blue titanium, topped with an anti-reflective coating sapphire crystal glass dome, the black brass dial is painted blue, with a 3D applied index and white luminescent numerals, clearly laying bare its intention and giving a large central place to the representation of the lunar body.

The titanium winding crown continues the overall style code of the piece with a black design. Shades are also present in the bi-material strap, made of black rubber and alcantara blue, decorated with embossed and enhanced blue stitching and finished with a black titanium clasp with glossy and sandblasted finishing.

The multi-layer middle case presents subtle openwork, and the sandwiched construction method of the watch overall, waterproof up to 50 metres, with a central protective titanium case for movement, allows optimal handling of the missions assigned to this new spacecraft.

The Moon Runner is driven by a manual winding mechanical movement, 601-MO calibre (41 rubies) at a frequency of 28,800 vibrations per hour (4 Hertz) and with 72 hours’ power reserve.

This calibre was designed by Eric Coudray, a well-known master in the field. Under the guidance of Pur TEC, and with the assistance of Paul Clementi, second Prix Gaïa winner, the movement has developed a finer aesthetic and finish, with elegant satin finish or laser-treated or bead-blasted parts.

“Mecafluidic technology is a new term in science and research, harnessed for use in luxury watchmaking. We have the ability to highlight the symbiotic nature of these two - mechanical and fluidic - technologies,” says Davide Cerrato, HYT CEO and creative director.

As each HYT product is at the cutting edge of technology, each one is above all an item of mechanical luxury watchmaking dedicated to the pleasure of knowledgeable connoisseurs. The mechanical beating heart gives its power and strength to the precise functioning of the watch. This precision is clear in the reading of the time settings. All the originality of HYT watches lies in the specific nature of this time indication: no classic hands, instead the observation of the movement of the two fluids. 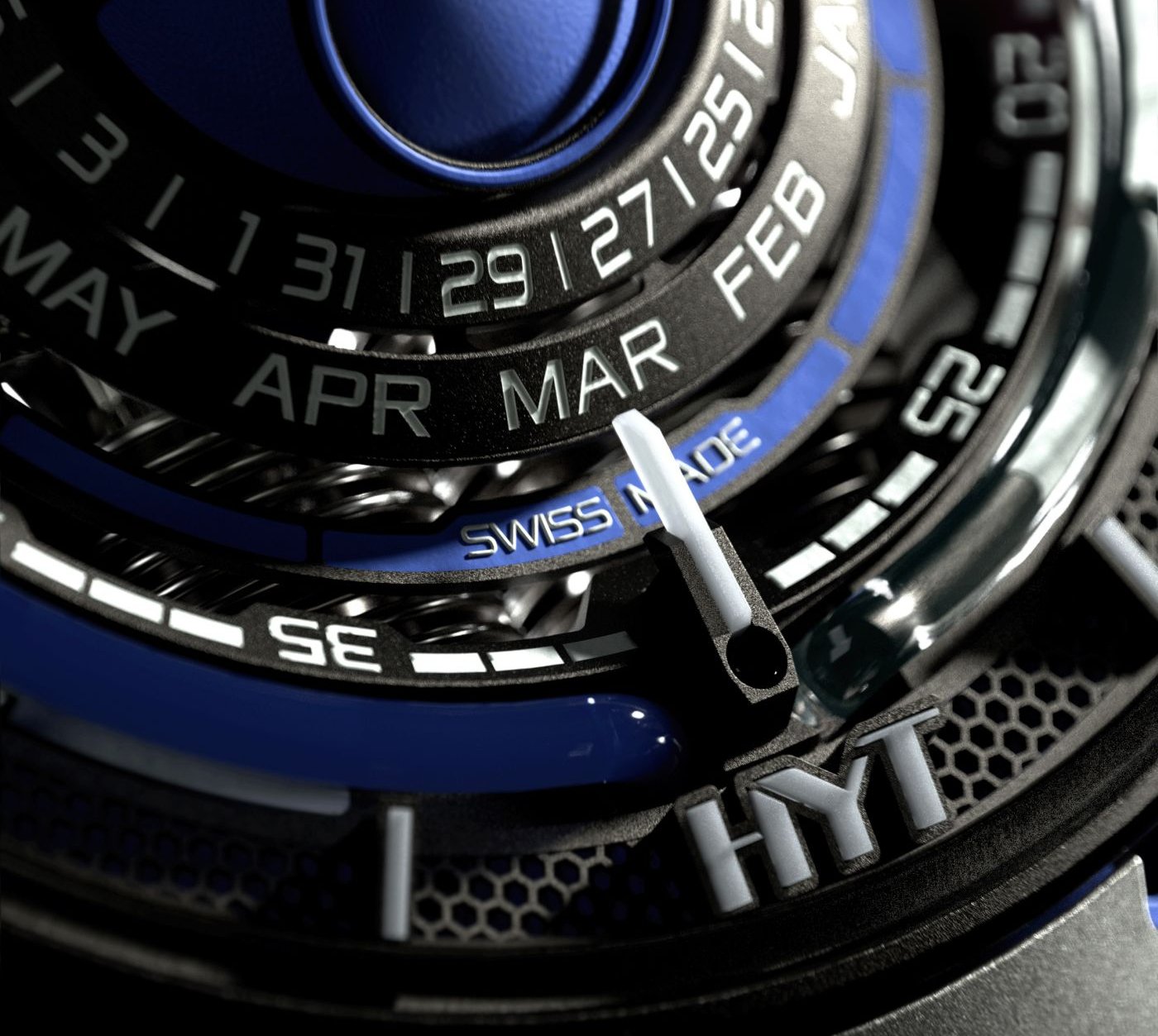 The perfect circulation of the fluids in microcapsules or “capillary tubes”, at the boundary between the micromechanical and chemical realms, gives HYT its uniqueness and originality. A quarter of a human hair, but 10,000 times more airtight than a classic watch.

How does it work? Observing the watch dial offers some insight. Two flexible reservoirs (called “bellows”) are attached to each end of a capillary. The thickness of the walls of this reservoir is of an extraordinary fineness of hardly a quarter of a human hair. The active, coloured fluid is in the first reservoir; the passive fluid is in the other reservoir. It is transparent.

Engineers have tamed the physical phenomenon based on the repulsive force of the molecules in each fluid and the capillary walls to keep the fluids separate, while controlling their progress through the bellows. The fluids are immiscible, meaning that they do not mix, and are in permanent interaction, at the heart of the watch.

To ensure the whole watch works with optimal reliability, the fluidic module must be perfectly airtight. In practice, its airtightness is 10,000 times greater than that of a diver’s watch. This is also the reason why the fluidic modules are permanently sealed.

A question that definitely arises for hi-tech fans is how do you offset the fluid expansion due to variations in temperature?

This is an important question about a valuable item, such as a wristwatch is - which is thus subject to body temperature - and naturally exposed to the changes and uncertainties of everyday life, both indoors and out. The key component is the thermal compensator inside one of the two bellows.

The ability to provide constant displacement and distribute enough energy so that the liquids flow at the desired speed inside the glass capillary is one of the most remarkable features of the exceptional watch calibres developed by HYT. An increase by a minute of the liquid inside the glass tube is equivalent to a movement of 1.5 micron of the bellow. The choice of a manual winding movement is not insignificant: it ensures regular and seamless operation.

To allow a link between the fluidic system and the watch calibre, the movement has an oversized lever, called the “sensor”, which serves as a bridge as it allows a link to be made between the functioning of the cam, which transforms a circular movement into a straight-line movement, and that of the bellow, whose role is to regulate the movement of the two liquids. This cam, an innovation introduced by Eric Couderay, allows a perfect synchronisation between the fluid time and the mechanical time.

In practice, once the lever is activated, the movement drives against a bellow allowing the uninterrupted flow of fluids for twelve hours. When it reaches 6 o’clock, the two liquids return to their initial position, giving a retrograde reading of the next six hours.

It should also be noted that during the retrograde backflow, the liquids are completely disconnected from the mechanism. The fluidic system itself regulates the return to the initial position in a fascinating way. These technical features, complex at first, are in fact a real eye-catcher as the watch dial is constantly in action.

The sharp eyes of experts, collectors and lovers of luxury watchmaking will also rest on the finish of the calibre and the new casing of the overall piece. HYT’s teams have paid very special attention to this. The outcome is obvious and clearly places the HYT Moon Runner among the best standards of contemporary luxury watchmaking with exacting requirements of the workmanship of components. Such a quest for perfection, supported by the masterful expertise of traditional Swiss watchmakers, is combined by HYT with creative boldness, as demonstrated by the exclusive black finish.

Everything has been thought of carefully and in symbiosis: the finish of the watch calibre and the technological and modular casing. Overall, the entire quality chain process in watch production has been rethought and refined with the development of these new timepieces, relying on over a decade of practical experience. The perfect efficiency of the 601 CM calibre has also been tested to ensure its reliability.