Urwerk: the last model in the UR-220 collection


The new UR-220 Red Gold is sparkling and flamboyant. Its case has been forged in 4N gold and teamed with an immaculate white textured strap. All in all, a resolutely 80s vibe.

Urwerk: the last model in the UR-220 collection

The new UR-220 Red Gold is sparkling and flamboyant. Its case has been forged in 4N gold and teamed with an immaculate white textured strap. All in all, a resolutely 80s vibe.
L

et’s set the scene. Florida. Palm trees set against a cloudless sky. Flamingos frolicking in the sunshine. Idyllic scenery. And then everything speeds up. A synthesizer sets a hectic tempo for a sequence shot at the water’s edge. Here in the marina, the sailboat is sparkling white and an alligator acts as a watchdog.

For fans of the 1980s the references are crystal-clear: Sonny Crockett and Ricardo Tubbs in Miami Vice. The golden tans of these hero police officers with their immaculate suits and Colgate smiles. The personification of success. These images had a lasting impact on an entire generation and featured two predominant colours: sparkling gold and virginal white.

"Gold and white may seem an unlikely combination”, says Martin Frei, “yet the combo resonates deeply with me as a happy memory. I remember the super-cool heroes of my teenage years that we all wanted to resemble. They were ruggedly handsome, and nothing could faze them. They would chase down criminals in their pristine loose-fitting suits, Ray Ban Wayfarer 5022 on, their hair blowing in the wind and gold gleaming on their wrists. That was really the iconic image of the 1980s.” And to conclude with a laugh: “And from this panoply, I was able to acquire the sunglasses. A must! »

Felix Baumgartner insists on the contrast between the timeless gold and the modernity of the rubber: "This UR-220 Red Gold, which marks the end of a collection, is a powerful model endowed with strong character. It plays on striking, full-on contrasts. It’s a great way to make a statement and wrap up this line with a clear-cut bias, a surprise ‘wow’ effect.”

One last time let’s review the characteristics that have made the 220 collection so successful.

For once, let’s start with the back of the watch. That of the UR-220 bears eloquent witness to the evolution in the line of the 200 modules. It bears one of the hallmarks of the Urwerk watchmaking style, the Oil Change feature. Urwerk returns to its first love and – after a protracted absence – reinstalls this indicator showing how long the watch has been operating. This unique information, which has long enriched models such as the UR-110, has undergone significant changes. On the UR-220, the Oil Change takes the form of a digital gauge, whose unit is the month, indicated on two adjacent rollers. The wearer of the watch triggers this device by removing a protective pin and pressing a pusher on the back of to activate the counters which display the mechanism’s accumulated running time of in months. After 39 months – three years and three months – a service is recommended and once this is complete, the Urwerk teams reset the counter and replace the pin. "It is a digital counter, which could imply just an alignment of units, a coldly calculated measurement, yet it actually testifies to personal attachment. The Oil Change counts the hours the UR-220 has been on your wrist. It gives visibility to all the energy you’ve put into it by conscientiously winding it”, says Urwerk’s co-founder Felix Baumgartner.

The UR-220 features Urwerk’s patented revolving satellite complication. The wandering hours are displayed on three rotating satellite cubes. Each in turn slots into a hollowed-out minutes hand. Together they travel 120 degrees along the counter before – once the hour is up – the hand makes a big jump back to the “0” marker to accommodate the next cube. This retrograde minutes display is doubtless still the largest to be found in a wristwatch. In a quest for greater power and velocity, all faces of the minutes hand have been openworked.

This lightning-fast retrograde system is based on three key elements:

Another item of information provided on the dial is the power-reserve indication which can be read on two subdials. The power reserve is indicated by these two 24-hour gauges. During manual winding, the right-hand gauge is the first to indicate the mainspring state-of-wind. Once it has reached its maximum level, the left-hand indicator takes over. This power reserve distributed between two “reservoirs” is composed of 83 mechanical elements, testifying to the complexity of its development.

As no detail has been overlooked here, the typography of the hour-markers on the UR-220 has been completely redesigned by Martin Frei and the hours and minutes numerals feature an even sharper profile. 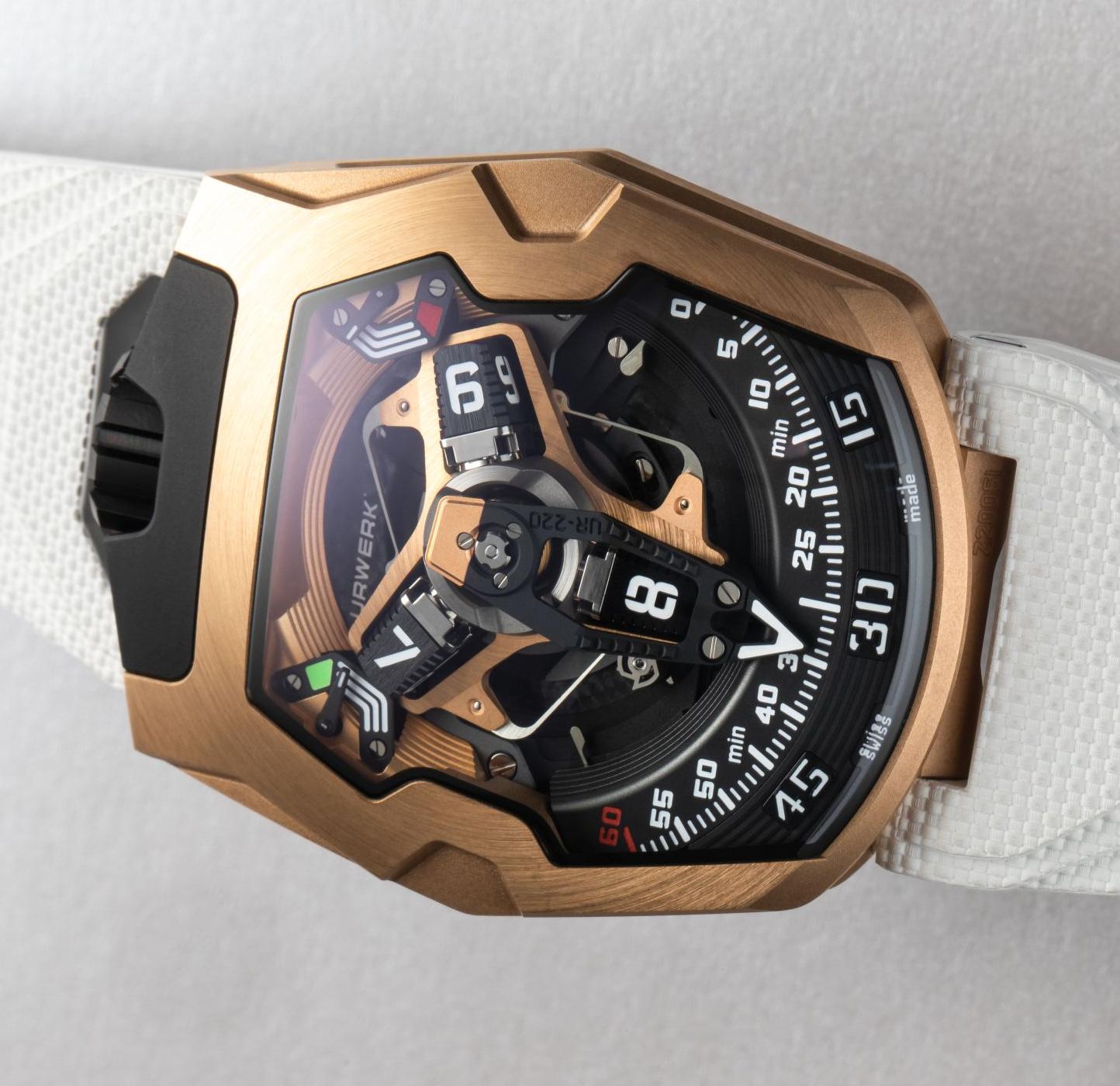