Everything in this new DB28XP Steel Wheels engages you to re-discover the art of De Bethune and its vision of watchmaking for tomorrow. A symbiosis between the thinness of the case, the components, the movement and the finishing – all of which resonate with each other in a spirit of great simplicity.

Everything in this new DB28XP Steel Wheels engages you to re-discover the art of De Bethune and its vision of watchmaking for tomorrow. A symbiosis between the thinness of the case, the components, the movement and the finishing – all of which resonate with each other in a spirit of great simplicity.
T

he DB28 Steel Wheels came to be in 2018, under the sign of transparency and light, with the idea of opening the dial to reveal the contemporary architecture of its movement. Recognizable by its delta-shaped bridge – a De Bethune hallmark – and its moon at 6 o’clock, the DB28 Steel Wheels fascinates with a multitude of different forms – hemispherical, concave, spherical – for an architecturally dynamic result.

De Bethune has already opened a chapter in exploring the realm of the ultra-thin Universe in 2020 with the launch of the DB28XP to celebrate 10 years of intense work and research, of a mechanical and aesthetic quest. Throughout the quest of designing an ultra-thin watch, Denis Flageollet was driven as much by the technical challenge as the aesthetic challenge, by the complexity of ‘finesse’. An adventure in which absolute rigour maintains the balance between design aesthetics and engineering constraints.

As a self-evident evolution, the DB28XP has become an ideal of beauty, of elegance that expresses purity in its most absolute version. Everything in this new DB28XP Steel Wheels engages you to re-discover the art of De Bethune and its vision of watchmaking for tomorrow. A symbiosis between the thinness of the case, the components, the movement and the finishing – all of which resonate with each other in a spirit of great simplicity. 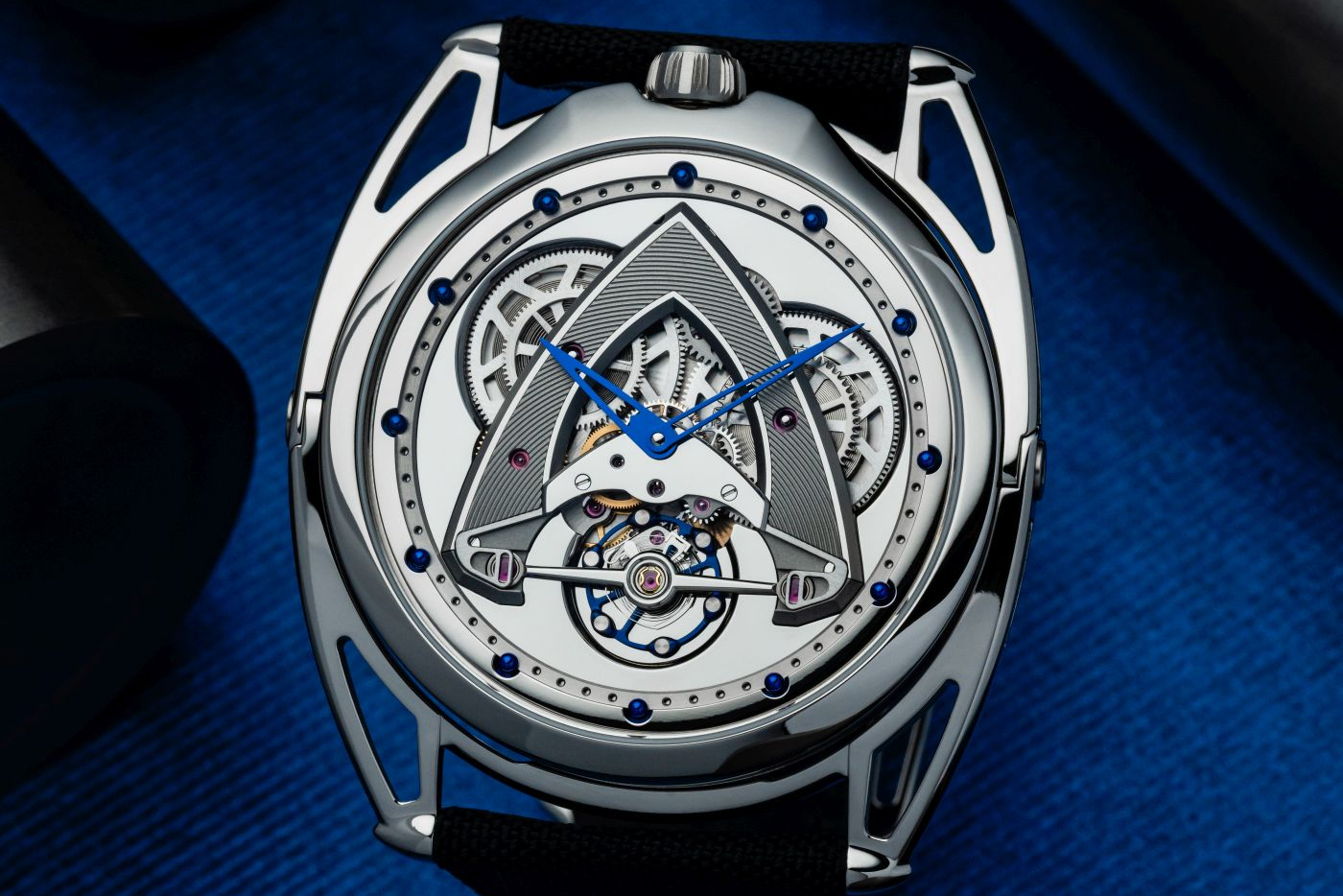 It’s about all the levels at which one experiences a timepiece, its layers, reliefs, the light playing with shadows and reflections. Cut from titanium, the watch reveals an architectural fusion of space, time and light that lingers long after the first glance.

A multitude of different shapes – hemispherical, concave, spherical, a sequence of microlight, satin, polished and blocked finishes allow a continuous interplay of light and shadow. By playing with light and shadow, this dial adds depth and offers a more architectural and dynamic result. The watch as whole becomes more contemporary.

The distinctive architecture of Calibre 2115v11 is beautifully highlighted by the decision to trim down the mechanism, notably by openworking the barrels and ratchet wheels, as well as cutting out the heart of the central delta-shaped bridge. The latter is adorned with Microlight decoration, developed by De Bethune. The entire movement thus creates the impression of levitating.

The ratcheted chapter ring inspired by gear-wheel toothing surrounds 12 polished and blued spheres marking the hours and discreetly recall De Bethune’s signature. The hours and minutes hands in the center are made of blued titanium.

The hand-wound movement features De Bethune’s balance wheel, visible through the dial thanks to an opening at 6 o’clock. The result of continuously exploring the boundaries of physics and mathematics to improve timepiece operation, it benefits from the latest advances. Its diameter is not too large, either. Made of titanium, it is equipped with small white gold weights placed on the outside to give remarkable qualities of inertia, reliability and regulating ability.

Then there is balance spring. At De Bethune, this minute, extremely fine spring, considered to be the soul of the mechanical watch, maintains its true centre of gravity with a flat terminal curve affixed to the outside of the balance-spring. Differences in the thickness of the blade add to the almost perfect precision of its concentric development. Among the many advantages: lower height, better adjustment of concentricity, finer adjustment of the racquet, no need for pins. The curve’s shape even acts as a shock absorber in case of impact. Finally, the material’s internal structure remains intact since it has been neither stressed nor bent. It is through these numerous tried and tested developments, which are constantly revisited and further improved, that De Bethune has succeeded in increasing the power reserve by 20 percent, bringing it to a total of 6 days.

Equally visible – and geometrically positioned in relation to the calibre’s plate – is the exclusive triple shock absorption system designed to protect the whole assembly. Not only was De Bethune the first to design a bridge held on both sides, symmetrically, to ensure the balance is kept perfectly in position. The Maison also added two shock absorbers at each end to supplement the shock absorber of the pendulum itself. Hence the name “triple pare-chute” or triple shock absorber, which effectively absorbs and dampens violent shocks with springs instead of screws mounted on perfectly polished axes.

Like all the models in this collection, the DB28 Steel Wheels still surprises observers by the light feel of its case, entirely crafted in titanium, and by the presence of De Bethune’s patented floating-lug system adjusting to wrist size and movements.

A more pronounced curvature, flowing with the lines of the wrist. The plate’s Microlight finish is echoed along the sides of the case band, rendered all the more meticulously in the absence of simple geometric forms.

The finishing touch: an alligator strap with a titanium buckle, which also contributes to the practicality and everyday wearability of this very special timepiece.