New hands, 200-meter depth range, micro-adjustment clasp, rubber straps and bracelets, platinum micro-rotor: these are some of the updates and available upgrades on the ambitious Horage Supersede model. The timepiece is a micro-rotor sports watch less than 10mm thick (9.85mm) with four complications (GMT, day/night indicator, date and power reserve indicator).
I

ndependent watch brand Horage has announced that new development is coming to fruition for its Supersede model, now available for pre-order. It has also shared updates regarding the aesthetics and the potential future of its K2 micro-rotor calibre.

“We’ve been hard at work finding the best solution for the hands regarding luminescent coatings and final designs. Our early CGI renders showed orange and red hands, but it proved unfeasible to have luminescence on the very narrow seconds hands as planned,” stated the brand.

Here is a closer look at some of these updates.

To fulfill early pre-orders with an aesthetic similar to the CGI renders available at the time, the brands will release 250 watches with a red seconds hand (front tip) and 250 watches with an orange seconds hand (front tip), but neither will be luminescent. However, it found a potential solution for this: “A secret sauce we’re calling “Magic Orange” is showing promise as a viable lume for the narrow seconds hands, so we’ll produce a run of watches with an orange hand as stated above, but luminous. This would be in line with the original design and we would skip the non-luminous orange hand altogether.”

If the “Magic Orange” ultimately doesn’t meet the brand’s exacting quality standards, there’s a second design solution: “We’ve been working on an orange lollipop seconds hand with lume in the square aperture. This would be produced in addition to the non-luminescent orange seconds hand, but again only if the “Magic Orange” doesn’t go into production.” 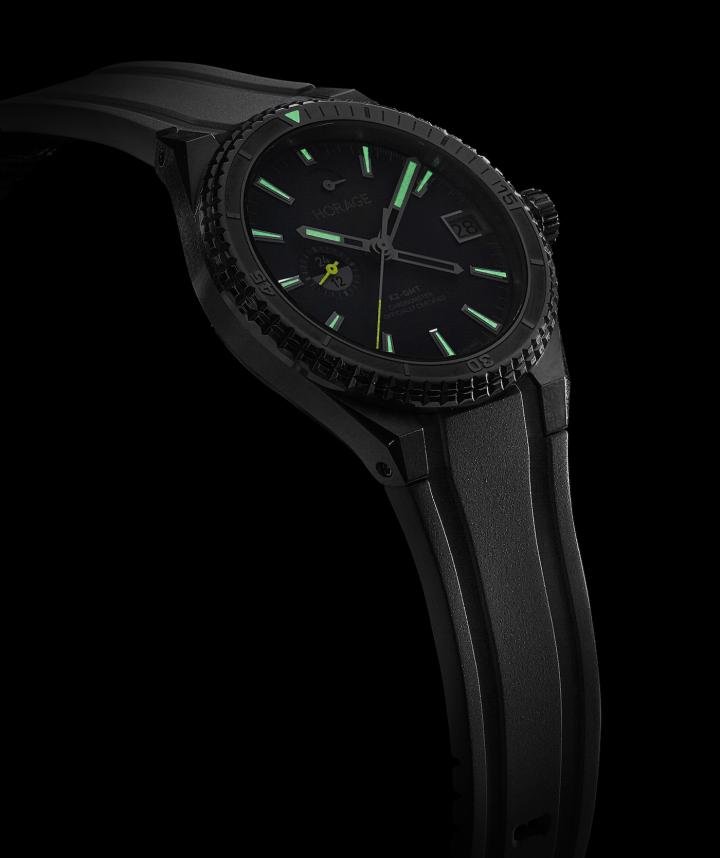 Confused? Let’s break it down below: 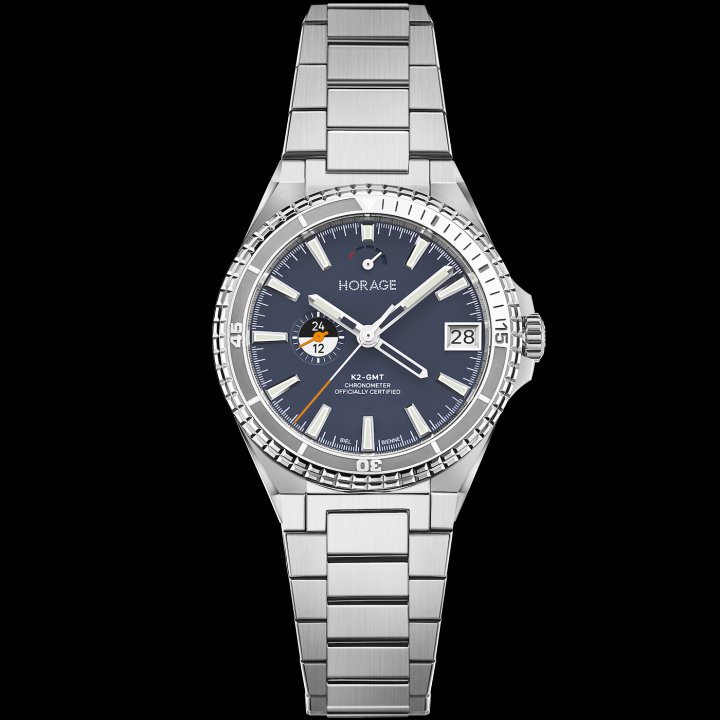 Supersede might just be the only watch in its class to have this 200-meter depth rating, a micro-rotor sports watch less than 10mm thick (9.85mm) with four complications (GMT, day/night indicator, date and power reserve indicator).

Development of Horage proprietary micro-adjustment clasp is complete and each buckle is subjected to 5,000 actuations - all passed with flying colours: 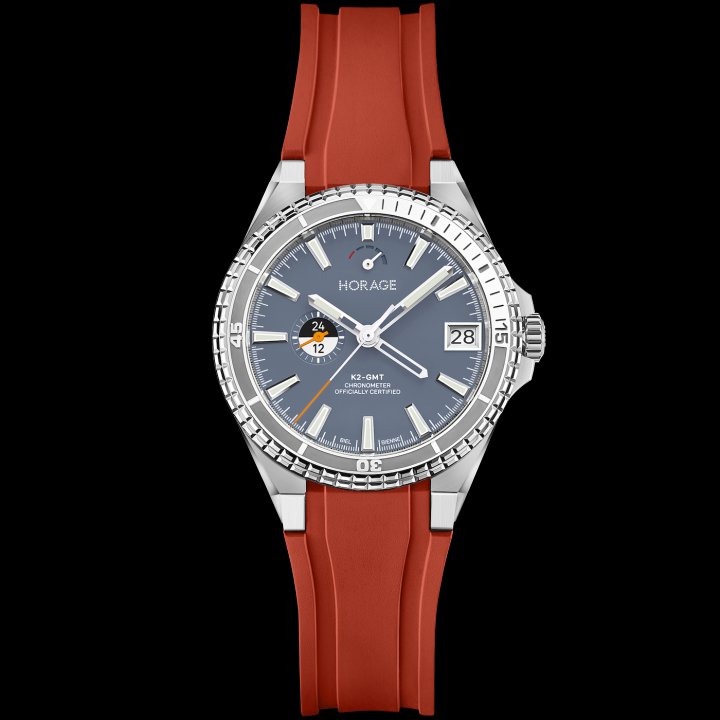 There are five FKM proprietary rubber straps available in addition to the 904L stainless steel bracelet. One strap will be included in the box with a full pre-order payment. In addition, customers have the choice between brushed or polished center links for the bracelet.

A STORY OF INDEPENDENCE

Horage is setting a new bar for Swiss independents with proprietary movement developments alongside distinctive watch designs. An investment in 14 years of engineering has resulted in three calibres: the K1 automatic, K-TOU tourbillon and now K2 micro-rotor.

Expanding on these developments is the engineering team’s sound knowledge of silicon escapements inclusive of hairsprings, the latter likely being a first for a small independent brand when shipped with Supersede. The K2 is COSC certified, comes with a power reserve of 72+ hours, measures just 9.85mm in thickness and is beautifully finished in 904L stainless steel. 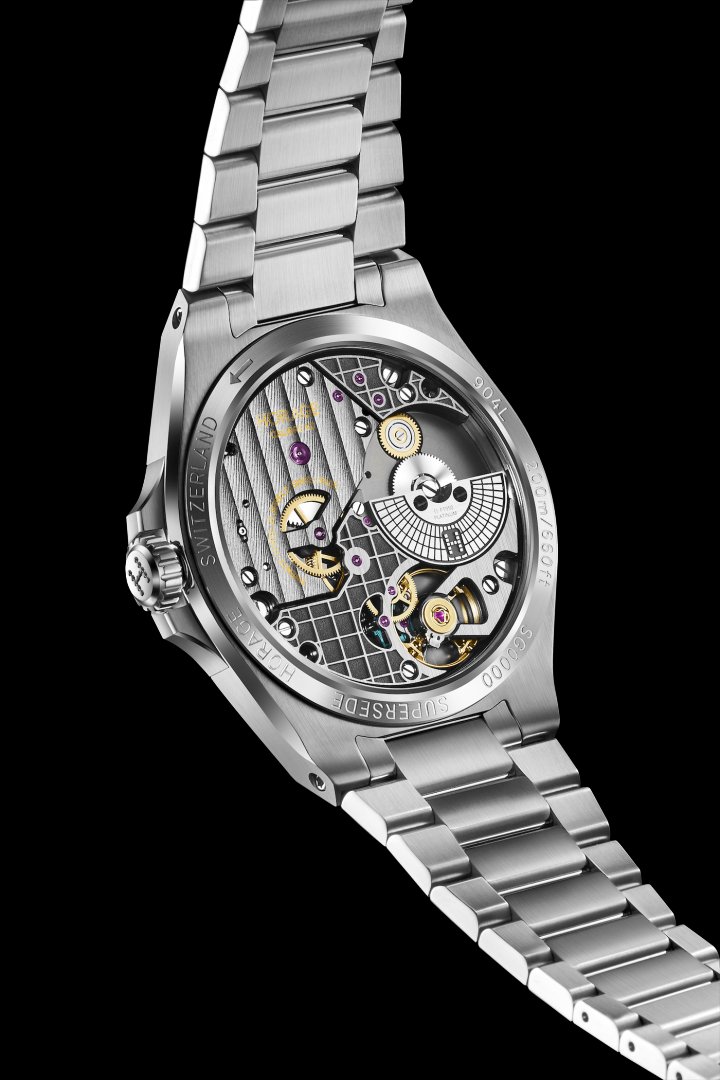 The Supersede base model will come with a gold-plated tungsten micro-rotor, but the brand has engineered a platinum PT950 version as well. Anyone who places a pre-order will have the option to upgrade to a platinum PT950 micro-rotor at a heavily discounted price. Platinum and associated production costs 30x more than tungsten and would add CHF 1,200 to the final price. However, Horage is offering this upgrade at only CHF 390.

This discounted upgrade applies to all pre-orders currently in place and upcoming in August and October 2022. After all pre-order rounds close, platinum might become a second model in the collection offered for retail at CHF 7,700, a CHF 1,200 upgrade over the gold plated tungsten base model of CHF 6,500 at retail.