The son of acclaimed mountaineer Reinhold Messner, Simon Messner follows in his father’s footsteps with an ascent of the Mont Blanc, the Montblanc 1858 Geosphere 0 Oxygen LE1786 strapped to his wrist. This special model is limited to 1,786 pieces, marking the date of the first ascent of the Mont Blanc by Jacques Balmat on August 8th, 1786.

The son of acclaimed mountaineer Reinhold Messner, Simon Messner follows in his father’s footsteps with an ascent of the Mont Blanc, the Montblanc 1858 Geosphere 0 Oxygen LE1786 strapped to his wrist. This special model is limited to 1,786 pieces, marking the date of the first ascent of the Mont Blanc by Jacques Balmat on August 8th, 1786.
R

einhold Messner is among the world’s most acclaimed mountaineers. He was the first man to climb all 14 of the world’s peaks and was the first climber to undertake a solo ascent of Mount Everest without supplemental oxygen. Now in his late seventies, he has passed his passion and baton on to his son Simon.

Simon Messner was born on 8th November 1990 and is the son of Reinhold Messner. Along with his three sisters, he has been mountaineering since a very young age. Like his father, he shares a passion to preserve the tradition of climbing, taking all necessary measures to protect the mountain environment by using as little equipment as possible and having never used supplemental oxygen on his ventures. 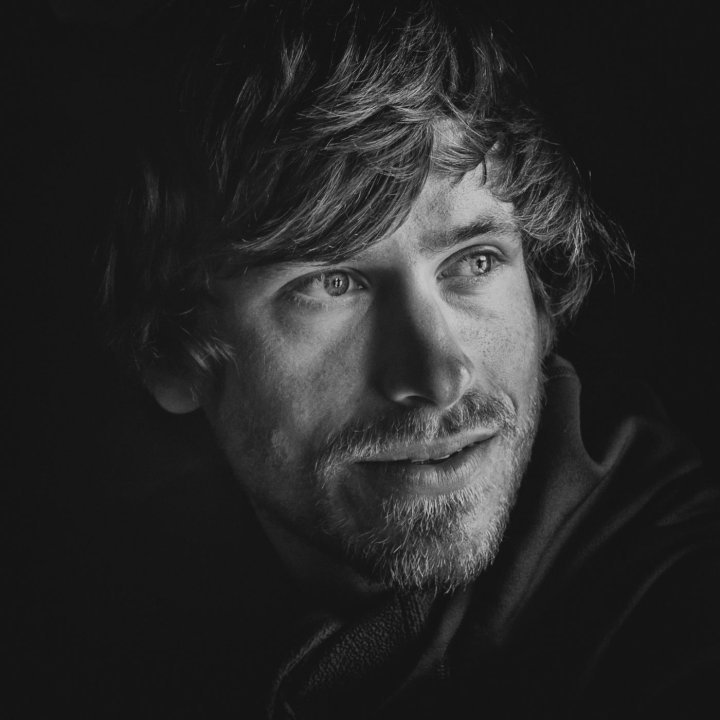 Many different goals can be set while mountaineering, but for Simon, the most important thing is the experience gained. The idea of racing to reach all of the world’s summits is not what drives him the most, it is more about being as close as possible to the mountain in the purest sense.

To underline his respect for mountaineering and the environment, he ascended the Mont Blanc in August 2022, going back to where it all started for Montblanc, with the Montblanc 1858 Geosphere 0 Oxygen LE1786 strapped to his wrist.

He set off from France’s L’Aiguille du Midi and climbed via Mont Blanc du Tacul and Mont Maudit, to reach the Mont Blanc – a route that is mapped out on the case back of this limited-edition timepiece using Montblanc’s three-dimensional laser engraving technique that is so realistic, it resembles a photograph of the Mont Blanc at sunset.

In addition to ascending the Mont Blanc, Simon has documented his adventure and filmed the final stretch to the summit. Montblanc customers can join him in the brand’s boutiques and witness this incredible feat with virtual reality glasses, giving them the incredible feeling of being on the mountain with him. 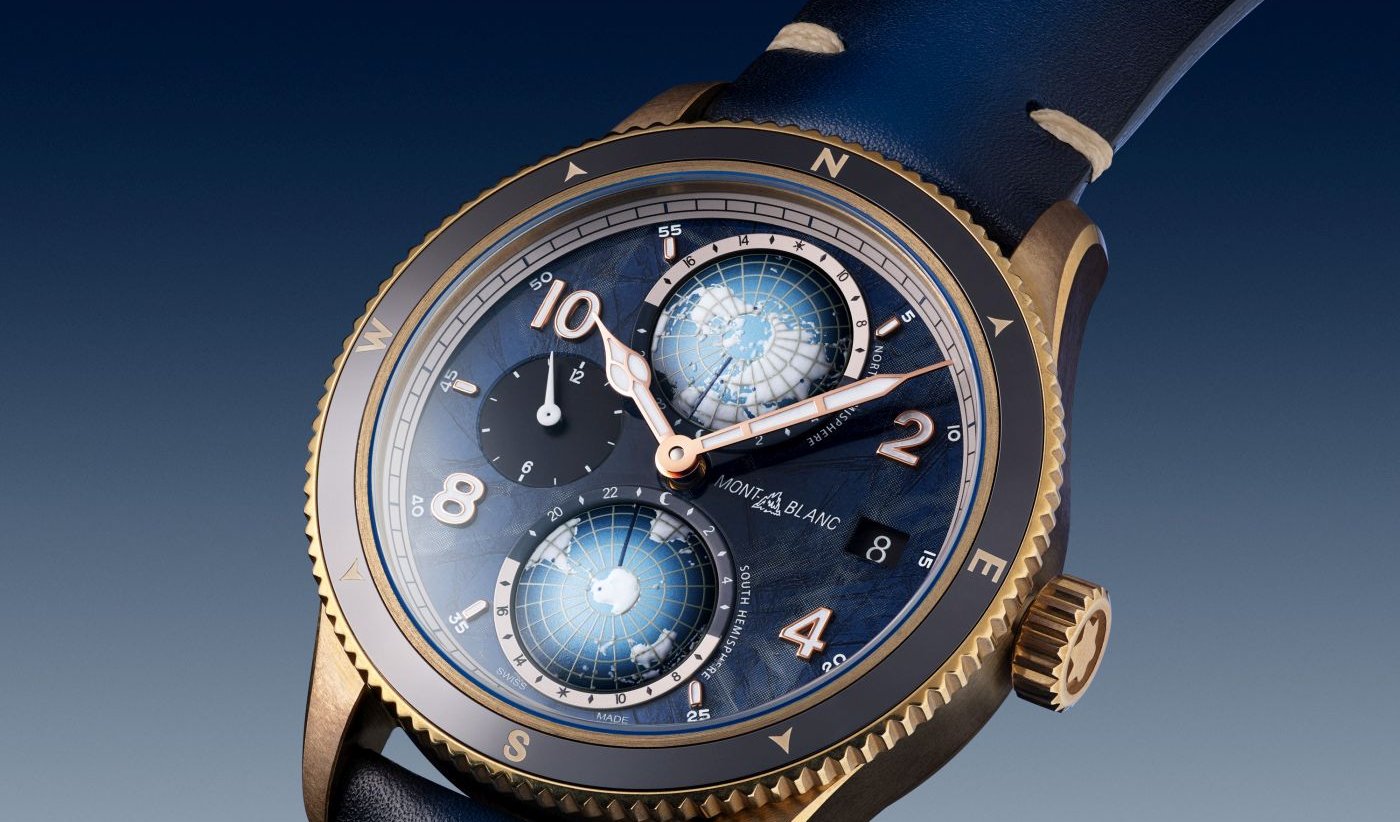 Simon has tested the Montblanc 1858 Geosphere 0 Oxygen LE1786 and its zero-oxygen construction all the way up to the 4,810-metre summit. This is only the second model to be devoid of oxygen, after the Montblanc 1858 Geosphere Chronograph 0 Oxygen LE290. The exclusion of oxygen has several benefits for explorers who need their equipment to work in the harshest environments. Zero oxygen inside the movement not only eliminates fogging, which can occur with drastic temperature changes at altitude, but also prevents oxidization. Without oxygen, all the components last far longer and will provide greater precision over time.

The Montblanc 1858 Geosphere 0 Oxygen LE1786 is adorned with the manufacturer’s new blue glacier pattern dial. The Maison’s designers found inspiration in the glacial lakes of the Mont Blanc Massif during a trip to the Alps. Ascending via the Chamonix Valley to the Mer de Glace (Sea of Ice), they were captivated by the texture of the glacial ice with its interlocking network of crystals that have been frozen in time for millennia.

Full of ideas, they returned to the manufacturer to try and figure out a way of translating what they had seen onto the face of a watch. This was no easy feat as not only had it never been done before by Montblanc, but a watch dial measures a mere 0.5 mm in height, making it very difficult to create the illusion of looking into the depth of a glacier. 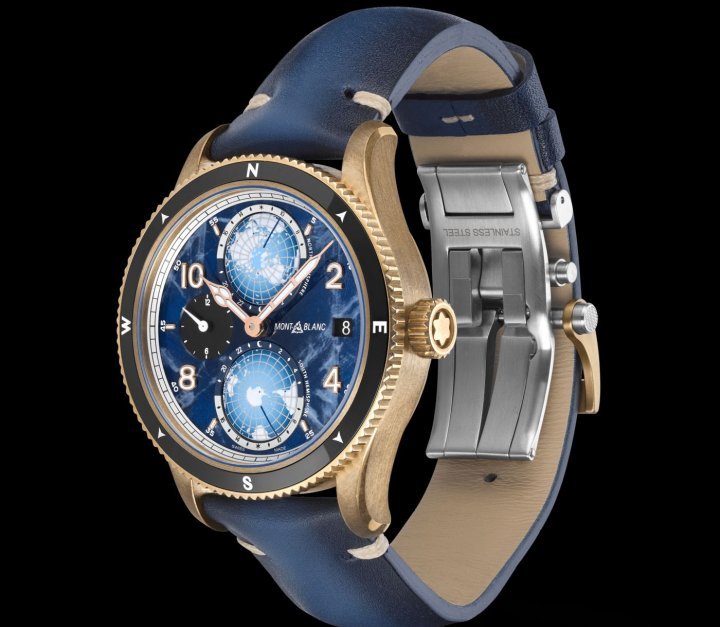 After several trials, the Maison found a technical solution to create an impression of genuine depth and luminosity. The dial makers employed an almost-forgotten ancestral technique called gratté boisé as the base. The result captures Montblanc’s spirit of exploration, both in terms of the adventures the watches are made for, but also the way in which they are designed and created.

The timepiece comes in a 42mm bronze case with a bi-directional knurled ceramic bezel with cardinal points. Like with all Montblanc 1858 Geosphere models, both the Northern and Southern hemispheres are represented with two three-dimensional globes that turn anti-clockwise and include a day & night indication so that the wearer can see what time it is across the Earth with a simple glance.

There is also a date at three o’clock and a dual time indication at nine o’clock. The dial is enhanced with luminescent highlights on the hour, minute, and dual time hands, as well as on the indexes and cardinal points, for reading in low light. The timepiece is powered by Montblanc’s MB 29.25 automatic movement and comes fitted with a blue Sfumato calf leather strap with beige stitching.

The collection is limited to 1,786 pieces, which marks the date of the first ascent of the Mont Blanc by Jacques Balmat on August 8th, 1786, a number that brings the adventure full circle in a genuine celebration of the mountain that started it all!