Housed in a 44 mm, black DLC titanium case, the Astronomia Solar Bitcoin is a symbolic and horological tribute to the world of cryptocurrency. Twenty-five aficionados will have access to the multi-rotational piece, which can be paid for in the cryptocurrency of their choosing.

Housed in a 44 mm, black DLC titanium case, the Astronomia Solar Bitcoin is a symbolic and horological tribute to the world of cryptocurrency. Twenty-five aficionados will have access to the multi-rotational piece, which can be paid for in the cryptocurrency of their choosing.
T

his is the dawning of the age of Bitcoin, and this is a watch for the ages. Jacob & Co. presents a ground-breaking, high complication timepiece: housed in a 44 mm, black DLC titanium case, the Astronomia Solar Bitcoin is a symbolic and horological tribute to the world of cryptocurrency.

By installing Bitcoin-related features within its vertical and rotating manufacture movement, Jacob & Co. creates a watch that’s powerfully metaphorical. By inserting a Jacob-cut diamond, a Jacob-cut orange citrine and a rotating Earth, Jacob & Co. adds its own craft as a nod to the success of those who have mastered Bitcoin. Twenty-five of them will have access to the multi-rotational piece, which can be paid for in the cryptocurrency of their choosing.

The black DLC titanium Astronomia Solar Bitcoin is interspersed with details and features that are directly linked to the Bitcoin universe: a Bitcoin currency logo; a flying tourbillon; a yellow citrine sun, a diamond moon and a golden Earth; a miniature rocket ship to reach for the moon. All these symbols tell the story of the advent of the first cryptocurrency, from abstraction to reality, from outlier to a mainstay of the financial system.

Jacob & Co. is also taking the logical step of selling the 25 pieces of this peerless watch in cryptocurrencies. As per international regulations, the brand is obligated to determine a fixed price in official local currencies. Regardless of where the sale ultimately takes place, payment will be available in the crypto of the buyer’s choosing, Bitcoin or altcoin, at the going rate on the day of the transaction. Purchase will be handled by leading payment processing platform Bitpay, which carries Dogecoin, Ethereum, Litecoin, and no less than 5 USD-pegged stablecoins.

The Astronomia Solar Bitcoin’s 44-mm wide case is crafted out of titanium which has gone through DLC processing. Diamond Like Carbon allows the crystallization of carbon atoms on a metallic surface, embedding in it a layer that is as black as pure coal, and as hard as diamond. As a result, the Astronomia Solar Bitcoin is dark and light, all the more so as the Astronomia case features wide lateral openings in the case band, allowing a 360° view on a high-end, complicated movement, developed and manufactured exclusively for Jacob & Co.

The Astronomia Solar Bitcoin also features high, full lugs. Attached from bezel to caseback, their plunging shape creates a vertical angle, from which hangs the black alligator strap. This ensures a comfortable and snug fit on the wrist, an indispensable property for any Jacob & Co. timepiece, and especially a 44-mm one. From its shape, colors and construction, the Astronomia Solar Bitcoin gives the impression of a piece that is lighter, in weight as well as visually, than what figures might suggest.

The Astronomia Solar is a member of the Astronomia collection, created with versatility and adaptability in mind. It stands out with a crown-less, panoramic case and a large domed sapphire crystal. It also has a full caseback, which is actually the movement’s mainplate. It includes two folding bows, which act as crowns. 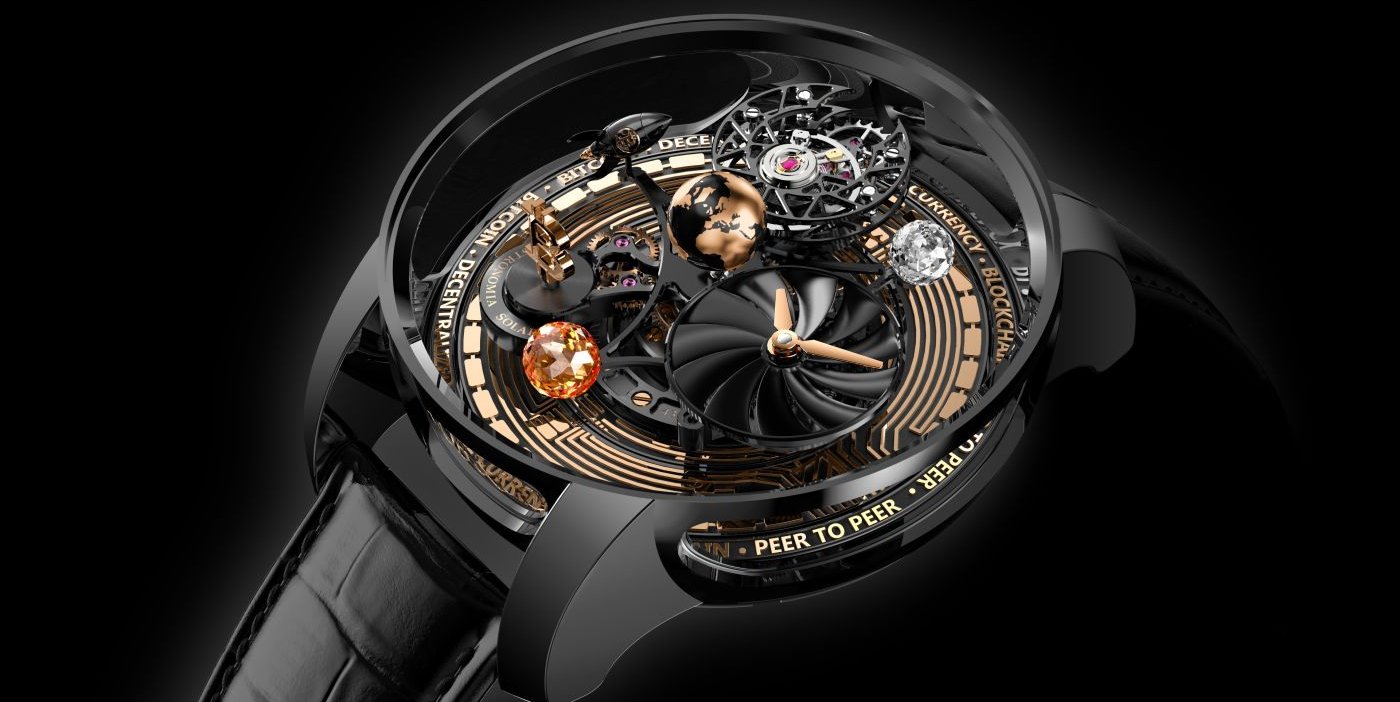 Jacob & Co. created the Astronomia Solar Bitcoin on a modified version of the Astronomia Solar movement. The bottom plate of calibre JCAM19 has been decorated to become an expression platform, fulfilling the symbolic nature of this piece. It’s shaped like micro-chip and circled by keywords that describe the crypto universe: a “peer to peer” system, regulated by “Blockchain”, where “Bitcoin” is the founding and leading “decentralized digital currency”. Those writings are crafted in positive engraving on the frame surrounding the movement and mounted on ball beatings. They spin counter-clockwise to the tune of one rotation each 11 minutes.

The rest of the movement is built vertically on top of this base. It’s crafted entirely out of titanium and some steel elements. It takes the shape of a three-pronged carousel. One of its arms carries a one minute-flying tourbillon with a wide, openworked, black cage. A second one holds the hour and minute dial. The third arm contains a rotating, vertical Bitcoin symbol.

The entirety of this vertical structure is topped by a rotating terrestrial globe, and spins on its large, central axis to the tune of one turn every 10 minutes. As a consequence, the flying tourbillon is really a twin-axis tourbillon, with one minute and ten minute periods. Also, the dial is mounted on a differential gear that counteracts the movement’s rotation, so that it always reads upright. And in this instance, it’s shaped like a fan, a nod to the ones found in Bitcoin mining farms’ servers.

On the Astronomia Solar movement, the functional prongs are topped with three other ones, with a decorative purpose. They provide the piece with the necessary symbolic substance that makes this an entirely cryptocurrency-oriented piece. One is a sun made of 288-facet, Jacob-cut orange citrine. The other is a moon made of a 1ct white diamond cut with the same technique.

Together, they maintain a natural lineage with the Astronomia Solar collection, but also reminds us that crypto is not an out-of-this-world phenomenon. It’s based in a form of reality. Hence the terrestrial globe made of gold and black lacquer, which stands at the top of the 19.90 mm high calibre. And as Bitcoin keeps reaching for the moon, figuratively, the movement also features a black rocket, complete with flaming reactor and Bitcoin sign.