While 3D printing is already being used on an industrial scale in fields like the aircraft industry or the medtech sector, this technology is still in its infancy in the world of watchmaking. 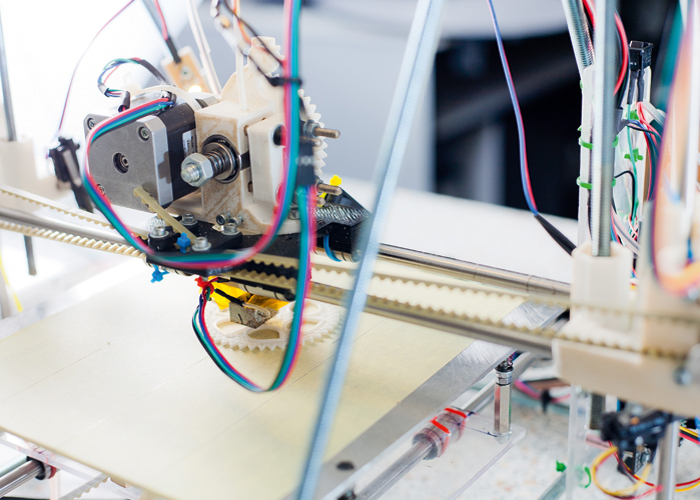 Over the last few years, there has been a lot of talk about the 3D printing revolution. Some oracles in their fab labs are already predicting a future where anyone and everyone will be able to print at home any object or creation they fancy. Which of course raises a few issues of intellectual property.Industry, on the other hand, has not waited for the popularisation of 3D printing to use rapid prototyping – in short, accumulating matter rather than removing it in the traditional way. Additive processes are divided into three main categories: photopolymerisation, extrusion and powder-based printing. In the aircraft industry, some aeroplane components are already produced this way: they are both lighter and less expensive.As for the watchmaking industry, it has remained relatively wary of this new technology. Only a few startups have already tried it. The question of 3D printing ing was nonetheless front and centre during a roundtable discussion during the last EPHJ show.

A PROBLEM OF FINISH

Marco Borraccino, professor at the Geneva University of Art and Design (HEAD), explains that in watchmaking, 3D printers are mainly used for making prototypes and not for production itself. “From a designer’s standpoint, this process has several advantages, particularly because it makes it possible to show their clients prototypes and therefore to visualise the object that has been drawn. On the other hand, it is limited to test usage. We are still far from a production tool. The main problems reside in the cost and finishes.”On this last point, Professor Borraccino points out that “the material does not have the solidity required for use in manufacturing. The density of the metal is not the same as that of machined parts. Sometimes, air bubbles may form during the finishing process and they can burst, creating microscopic holes on the surface of parts.” There is quite a way to go before attaining watchmaking excellence… However, 3D printing can be used to personalise or create specific detailing requested by customers.“We started using rapid prototyping in our programme at the HEAD eight years ago. Now we are seeing the results: our new students use this new technology intelligently. For example, they present collections of accessories made with 3D printing.”Marco Borraccino believes that this tool is useful for all applications for which the issue of finish is less important: “Ford won the Daytona automobile race by competing with a vehicle made out of 3D printed pieces! The advantages are more functional than aesthetic.”

Jérôme Mizeret, of the Haute Ecole Arc, has opened a fab lab in Neuchâtel that allows anyone to use the 3D printer. “In this context, expectations are very different from those in the industry: it is all about printing objects fast and cheaply. In an industrial context, apart from the question of finishes, the challenge remains the repeatability of production which is not yet fully mastered.” This specialist believes that 3D printing will not replace existing machines: “It’s is more of an addition that will facilitate new creations. This tool opens new creative spaces to produce objects that could not be made until now. It thus changes the very way objects are conceived.”This type of production should, in principle, be more ecological since it is based on adding matter rather than removing it. Eric Boillat, of the École Polytechnique Fédérale de Lausanne, qualifies this view, saying: “Reality is not quite so clear. It is true that this method produces fewer ‘shavings’. However, making the powder used in 3D printers requires a lot of energy.”The biggest question that remains in the wake of the popularisation of 3D printing is the issue of intellectual property, with a high risk of counterfeiting of copyrighted objects. “Legislation is rather vague: in theory, in Switzerland one may replicate jewellery for one’s own use,” points out Olivier Sacroug, a specialist in copyright who works for the Katzarov law firm in Geneva. “However, the person who made the 3D printing plans available can be sued. It is a bit like what has happened in the music and film industry…“