In the 1920s a young William Baume, a descendant of the founders of the “Frères Baume” watch company (established in 1830), settled in Geneva and partnered with a colourful figure named Tchereditchenko, who subsequently adopted his French mother’s family name and became known as Paul Mercier.

Baume & Mercier was thus born in 1918 as the two men joined forces, with Baume handling technical aspects and Paul Mercier taking charge of design and the commercial side of the business. Together, they established a fully-fledged manufacture in Geneva, making top-quality watches as well as movements that were exported to the United States.

The brand was taken over by the forerunner of the Richemont Group in 1988 and is today headed up by CEO Alain Zimmermann. Its flagship collections are the ladies’ Linea models, which have been around since the 1980s, and the classic Hampton model for gents.

The brand presents a new timepiece as a tribute to the “Outrenoir” work of major abstract artist Pierre Soulages. The result is (...)

Hampton, the iconic Baume & Mercier collection, pays tribute to Art Deco with the launch of a new contemporary collection.

An unprecedented timepiece joins the Baume & Mercier Clifton Baumatic collection. A small new complication with a unique look in addition to day-date (...)

The Clifton Baumatic combines understated elegance and technical reliability, thanks to the latest generation of the Baumatic calibre - the BM13 - (...) 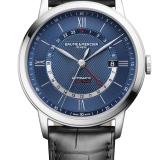 In the digital age, we hear a lot of scare stories about magnetic fields and the damage they can cause to our watches. Let’s untangle the real from the (...) 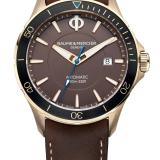 Originally made of stainless steel, the Clifton Club watch is presented this year in a bronze version, giving it a unique neo-retro charm. Without losing (...)

Aiming to bring more readability and legitimacy to Baume & Mercier, this year, Goeffroy Lefebvre and his team is extending only two brand lines and he (...)