Despite its relative youth (1975), Maurice Lacroix has developed a solid expertise and the brand has a promising future. The adventure started modestly in the small T2 workshop that produced watch cases, hands and dials. But the manufacture has constantly built up its technological independence to the point that it is largely independent today. Even components such as the escapement and the wheels are produced in their own workshops, which guarantees genuine “manufacture” movements for its high-end watches. To get to this stage, Maurice Lacroix set up the Manufacture des Franches-Montagnes SA, in Montfaucon, in the Swiss Jura region, and sources components from Queloz SA in Saignelégier (Bernese Jura), which it also owns. The Pontos range is the cornerstone of the collection, the highlight of which is the Décentrique GMT, a limited edition with two time zones, date and moon phase in a modern style with a striking dial. The brand’s Masterpiece collection already offers six different calibres.

> Maurice Lacroix – search all reports since 2000

The Masterpiece Embrace is a fusion of artistic expression and technical creativity, courtesy of its retrograde calendar and unusual small seconds display. (...)

Maurice Lacroix: “Brands are starting to understand the mechanics of e-commerce”

WHAT’S NEXT WITH STÉPHANE WASER 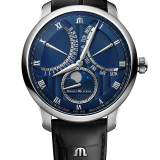 Twenty years after the launch of the first Maurice Lacroix model featuring a retrograde display, the Jura-based brand continues to embrace contemporary, (...)

The Canadian watch market is developing, as we stressed in a recent article! Among the new interesting initiatives is the first international watch show of (...) 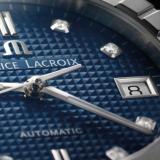 The contemporary Aikon Automatic is now available in a new 35mm case, designed to meet the needs of modern, ambitious women. Each watch is incredibly (...)

THE RENAISSANCE OF THE CALYPSO

In 1980, Maurice Lacroix released an eye-catching timepiece, the Calypso. The Swiss brand is now reviving its iconic timepiece with the Aikon Automatic, a (...)

The Swiss brand keeps up with its playful spirit and organises a new global watch hunt. Participants can win this time a limited edition of the Aikon (...) 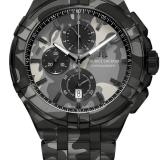 A vital piece of kit when clearing your way through the urban jungle, the Aikon Quartz Chrono Camouflage melts into the background, yet still stands out. (...) 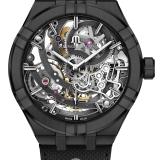 The skeleton watch is a part of Maurice Lacroix’s history and watchmaking culture. The avant-garde character of the watchmaking manufacture was quickly made (...)