Giovanni Panerai (1825-1897) opened a small watch shop in Florence, Italy and thanks to his close ties with a few famous Swiss manufacturers, started to specialise in the art and technique of assembly. His grandson Guido Panerai later succeeded in making the “Officine” the official supplier to the “Regia Marina” (the Italian royal navy) for watches and precision instruments. At the time, watches designed and assembled by Panerai had Swiss movements, some of which were from Rolex! The brand was known for its research into luminescent materials for its dials and for military aiming devices. The Radiomir was obtained by mixing zinc with radium bromide. A watch called Radiomir was launched in 1938, fitted with the famous luminescent dial but also with a strap that could be worn over diving suits. The brand later replaced Radiomir with Luminor, which was based on tritium. This substance in turn also gave its name to a famous collection of Panerai watches. In 1997 Officine Panerai was taken over by the Richemont group. Its headquarters remain in Italy but its production is based in Neuchâtel, Switzerland.

Panerai capitalizes on the spirit of its beginnings, distilling them into the new, deliberately distinctive manual winding (...)

Panerai redefines the style of the iconic Luminor Marina by combining original creativity with avant-garde materials.

Panerai celebrates the Year of the Rat with a special edition of 88 units decorated using the ancient technique of sparsello. Chinese astrological (...)

Powerful, intense and distinctive. Panerai Goldtech™ returns to take centre stage, fashioned into the forms of the new Luminor Due – 42 mm watches. A (...) 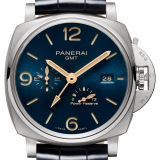 A challenging achievement of the new millennium, in keeping with the Panerai character, the Luminor Due continues its process of evolutionary adaptation. (...) 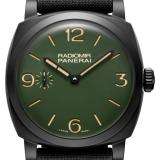 Matt green, in its solidest and most characteristic visual form, makes a striking appearance on the dial of four iconic classic Radiomir. Available (...) 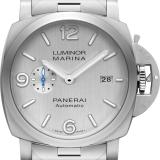 Iconic model of Panerai, the Luminor Marina arrives in a new version with its bracelet and its case in stainless steel. Available in a diameter of 42 or 44 (...) 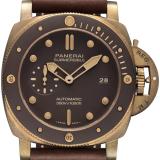 In 2011 Panerai surprised the world of watchmaking by creating a diving watch with the case made of bronze: an extraordinarily fascinating material which (...) 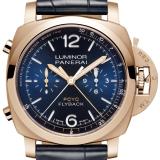 The three new luminor yachts challenge watches arise from the legendary link between Panerai and the world of the sea, which began more than a century ago (...)