The first watch by Officine Panerai to sport a moon phase and a novel calendar date display is also the brand’s most customizable watch, both technically and aesthetically.

The first watch by Officine Panerai to sport a moon phase and a novel calendar date display is also the brand’s most customizable watch, both technically and aesthetically.
I

’ve always liked the look of the wristwatches by Officine Panerai. Part of the reason is probably that the brand has a relatively narrow DNA, aesthetically speaking, and it usually sticks to it.

That has also made we wonder what it would take for the brand to go out of the box a bit more, and offer something without the usual reservations. 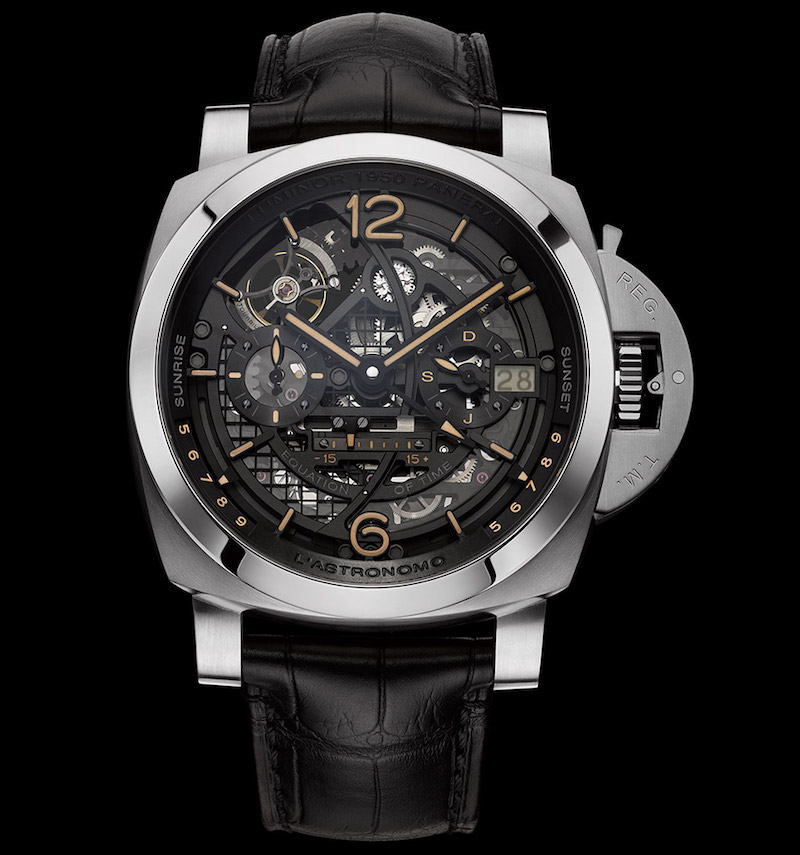 The SIHH is a forum for watchmakers to kick things off the year with some exciting releases, and the Florentine brand hasn’t disappointed with its latest.

Dedicated to astronomer Galileo Galilei, it is called the L’Astronomo – Luminor 1950 Tourbillon Moon Phases Equation of Time GMT. The watch name is a bit of a mouthful, but that’s in part because the new timepiece packs a big punch – and I’m not just talking about the 50mm case. 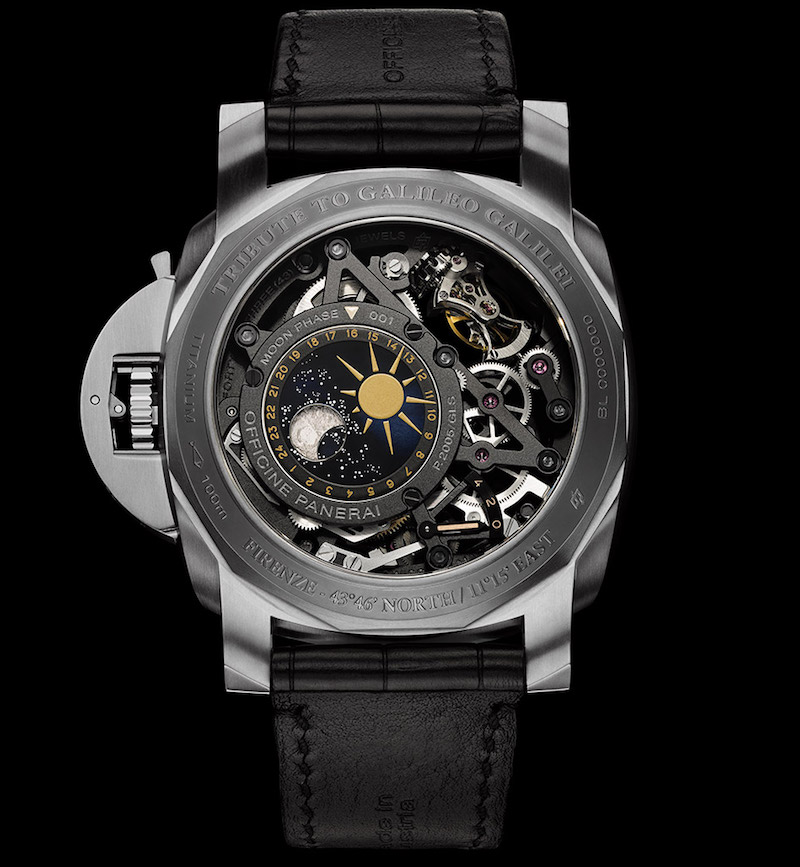 The first L’Astronomo model was presented in 2010, and the impressive timepiece featured the brand’s first tourbillon regulator, in addition to a calendar, equation of time indication, and sunrise/sunset display.

This new model builds on its predecessor, with a skeletonized movement, the P.2005/GLS, which can be personalized according to the geographical coordinates s﻿elected by the client. In addition, it offers two new innovations: a moon phase indication and a patent pending system for displaying the date. 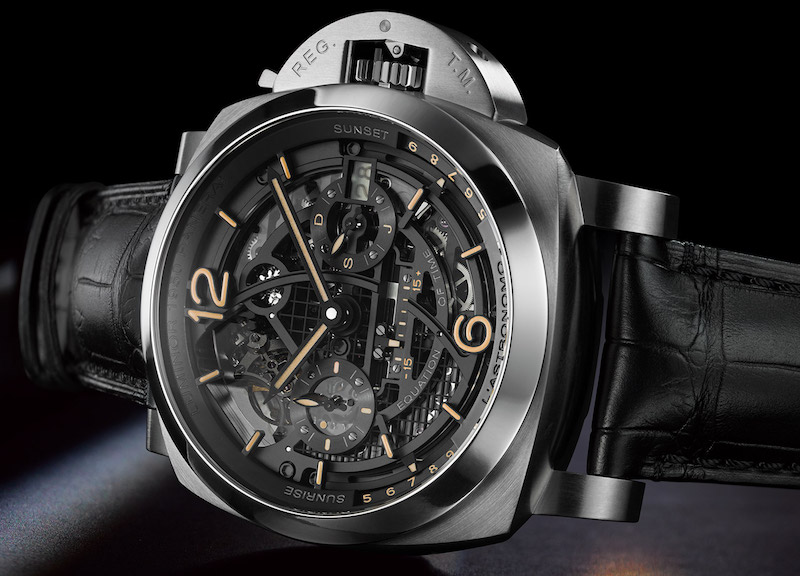 As the inventor of the telescope, Galileo made some revolutionary discoveries about the moon, so it makes sense that the model dedicated to him would sport an impressive moon phase complication.

On the back of the L’Astronomo’s movement we find a day/night indicator which also displays the phases of the moon via a system of two superimposed discs that rotate in tandem. The indication of the moon phases always corresponds to the geographic location s﻿elected initially by the user. 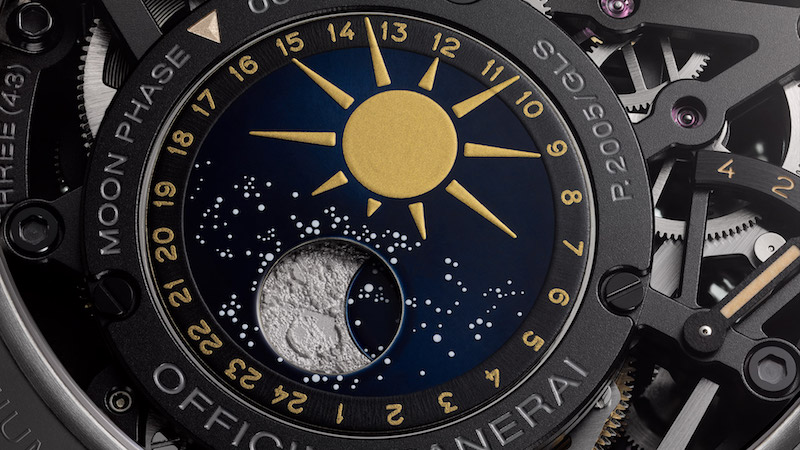 The hand-wound movement also showcases the characteristic Panerai tourbillon escapement and the two spring barrels – which deliver up to four days of autonomy.

A conventional date disc would conceal much of the caliber, and as a result the Laboratorio di Idee at the brand’s manufacture in Neuchâtel developed a new and more transparent date display system using discs made of borosilicate glass. 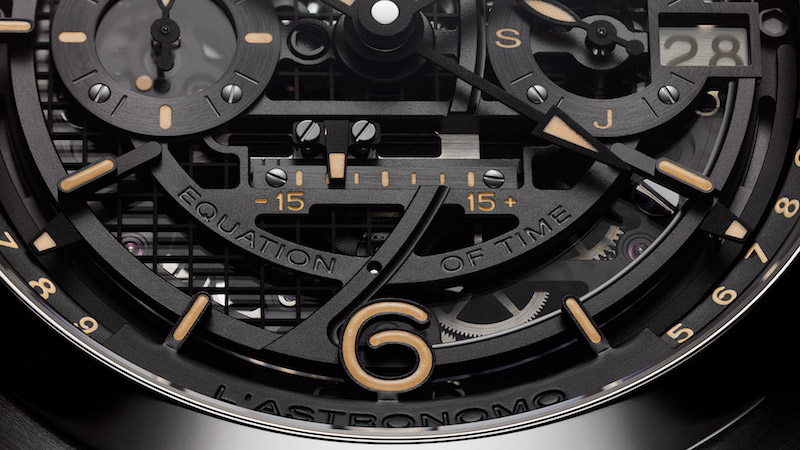 What I like about this watch is that it can be personalized from the technical point of view, in terms of the movement customization. In addition to that, the new L’Astronomo can also be personalized aesthetically.