The Big Bang Referee 2018 FIFA World Cup Russia is a professional grade football referee watch. But will it actually have traction among the wider public interested in connected watches?

The Big Bang Referee 2018 FIFA World Cup Russia is a professional grade football referee watch. But will it actually have traction among the wider public interested in connected watches?

Being associated with Russia and FIFA might not be considered the best for business these days, but Hublot seems to be beyond all that, at least judging based on its most recent timepiece. Hublot formally joined the world of football in 2006 by becoming the sponsor of the Swiss national team - a logical first start for a luxury watchmaker. By now the brand is all grown up in terms of sporting partnerships, and it boasts the designation as the “FIFA Official Watch” and “FIFA Official Timekeeper” for the 2018 FIFA World Cup.

So when FIFA came calling and asked for a new watch for use by referees during the World Cup, Hublot designed its first connected watch for the footballing universe: the Big Bang Referee 2018 FIFA World Cup Russia. 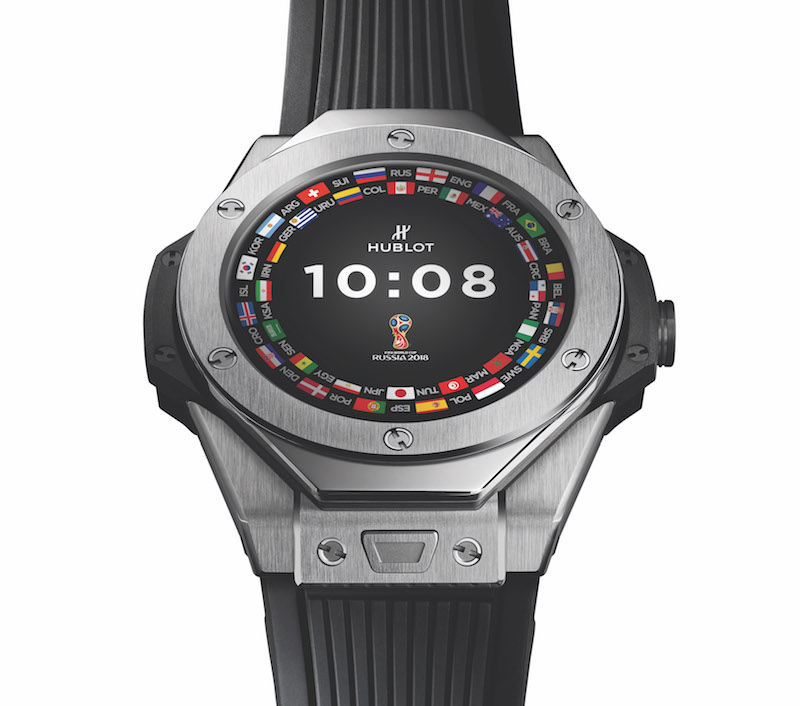 According to Hublot, this is a watch that “all football fans and Hublot fans have been waiting for.” I’ll play along and give them the “Hublot fans” part, but if the brand thinks that all football fans are anticipating the release of this watch, they will be sadly disappointed.

Call it a hunch, but I somehow doubt that your average hoodie-wearing, beer-drinking, pie-eating football fan can (or would) pony up nearly 5,000 Swiss francs to have one of these watches. And even then, why not just go for the sister watch, the TAG Heuer Connected, at about a third of the price? 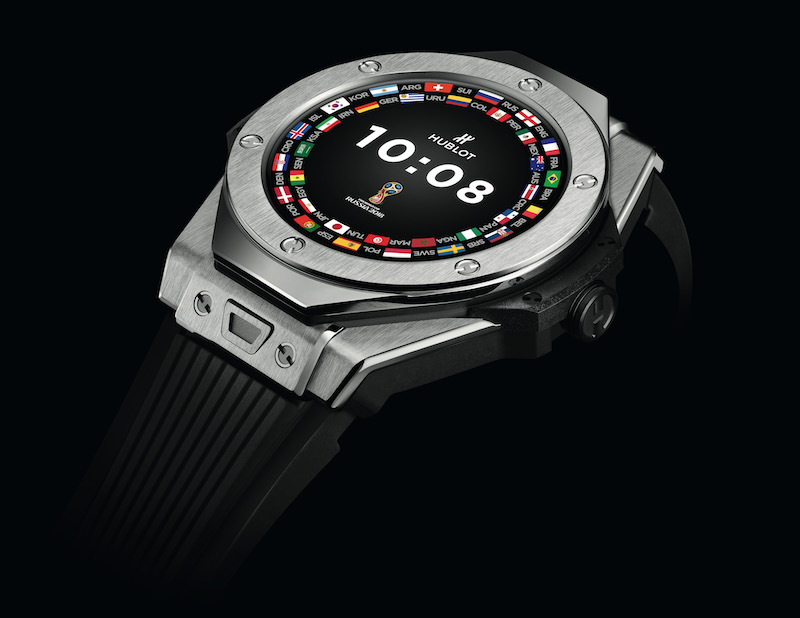 Most importantly of all, this watch is first and foremost a referee’s watch. Hublot has admitted as much. But any bystander would know that no true sports fan is a fan of sports referees (it’s always the ref’s fault!). So the question is why would they want to dress up as one with this fancy watch?

Now for the part you’ve all been waiting for: how will this affect the referees. Each ref sporting one of these fancy watches will be connected to goal-line technology, which is an electronic video assistance system that determines if the ball actually crossed the goal line.

Other than that, the watch will keep track of player substitutions. And yes, it will also be able to keep time, meaning the ref will know for sure when to call an half-time, full-time, and add the appropriate amount of added time. 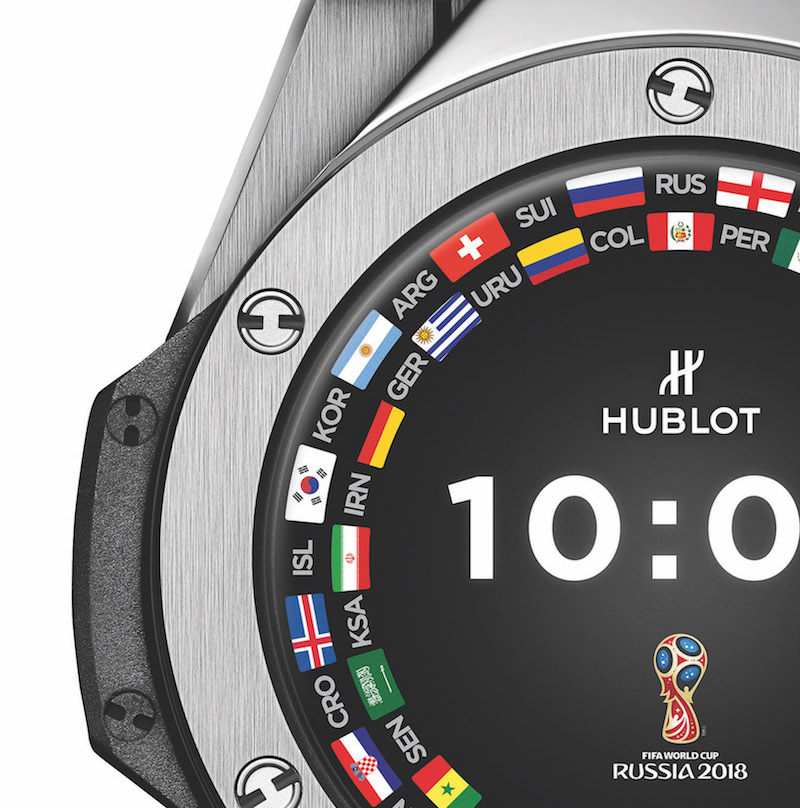 Hublot’s latest connected watch is based on the Big Bang

Back to the watch. Hublot would like us to know that, while this is a connected watch, it is first and foremost a Hublot watch. Indeed at first glance you might mistake it for the traditional Big Bang model, with its emblematic architecture in titanium, a bezel decorated with 6 H-shaped screws, and a Kevlar insert.

As a connected watch, it has also been said that the display on its analogue mode dial could pass for the same feel as the automatic model. Not having seen the watch in live yet, I will let that assessment rest for the time being. 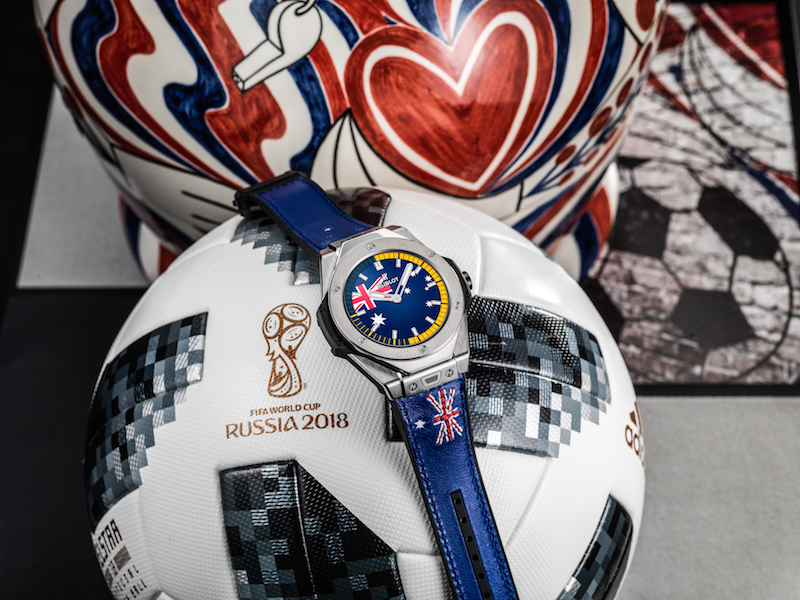 In terms of size, you might expect this watch to be big… and it is. True to its name, the watch is packaged in a large 49mm case. That’s all fine and well, so long as you have quality connected content to display on the relatively large watch face.

The watch has several notification functions, which announce updates like match kick-off times, yellow and red cards (for non-football fans, that’s when players have misbehaved, professionally), player changes, and the scoring of goals. In other words, the wearer gets to pretend they are a referee. 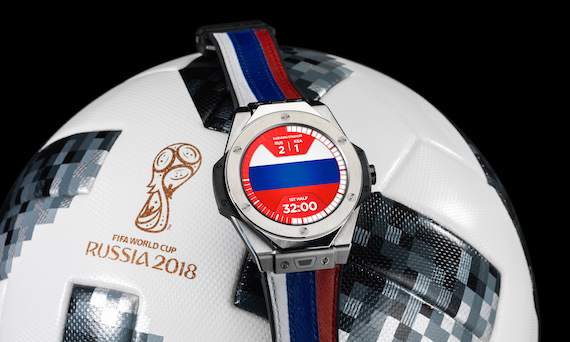 So when a goal is scored, the Big Bang Referee 2018 FIFA World Cup Russia vibrates and displays the word “GOAL” instantly in near real rime. During the match, the dial displays the match statistics, like the, number of cards, names of goal-scorers, player substitutions and match time.

As an avid sports fan myself, I am privy to all of these details (and much more) through various apps on my mobile phone so I don’t necessarily see a need for them to be displayed on my wrist.

Thankfully, the watch is more than a keeper of football stats. Benefiting from the Wear OS ecosystem, the Big Bang Referee 2018 FIFA World Cup Russia has thousands of downloadable apps to choose from. The watch is also compatible with all mobile phones using Android 4.4 and above or iOS 9 and above. 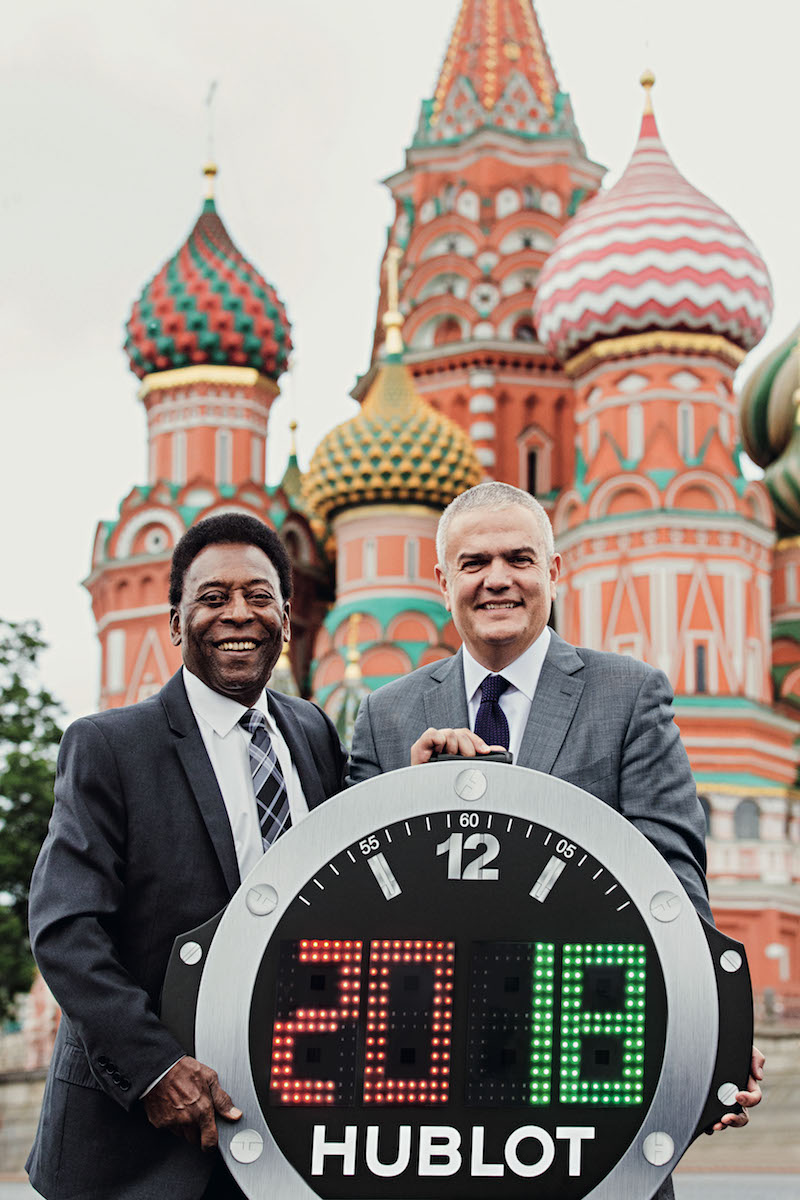 An added value of this watch is its personalization abilities. It allows for a series of “fan” dials in the colours of each participating nation. That means that 32 dial options are available to choose from, each inspired by the flags of the participating countries to the World Cup, as well as two “neutral” dials. Each dial can be set to either an analogue or a digital display.

In terms of nuts and bolts, all that connected technology is powered by the Intel Atom Z34XX with 1.6 GHz of processing speed and 512 Mb. That’s probably more computing power than your desktop computer had about a decade ago.

Charging is done through a contact charger, and a full charge takes nearly two hours. That’s not bad in itself, but when the battery life is only expected to be about 24 hours, it puts things a bit into perspective. 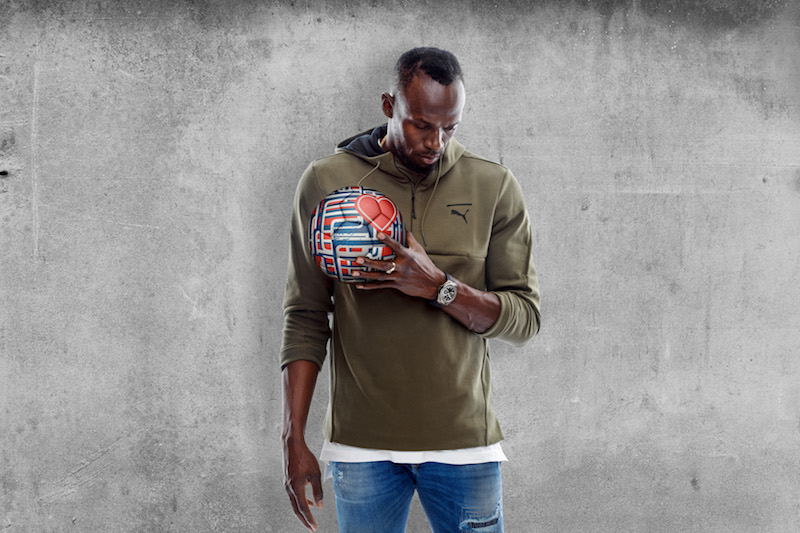 Even Usain Bolt is in on it

The brand’s interchangeable “One Click” strap allows the watch to be easily matched to one of the two straps provided with the watch: a cuff strap sporting the 2018 FIFA World Cup emblem and that of Hublot, or a black lined natural rubber strap.

To help promote the new watch, and indeed the World Cup, the brand has been counting on many of its brand ambassadors. They include, among others, French football legend and current national team coach Didier Deschamps, the legendary Pelé who was the youngest player to have won a World Cup and the only triple champion, the mercurial manager José Mourinho, aka the “Special One”, and even the fastest man in the world Usain Bolt.

The new watch will be limited to 2018 pieces (I always wonder whether these caps on production actually make business sense or whether they are just chosen to fit the narrative), and it will be available only from 1 May 2018 in Hublot sales outlets. How popular this watch will be among football referee fans remains to be seen.