The RM 67-02 “Alexander Zverev” edition weighs only 32 grams, making this one of the highest preforming luxury sports watches on the market.

The RM 67-02 “Alexander Zverev” edition weighs only 32 grams, making this one of the highest preforming luxury sports watches on the market.

Richard Mille has become something of a mainstay as far as high performance sports watches are concerned. Granted, the brand remains relative niche, in the sense that not may people can reach the six figure price tags of some of its watches.

But then again, not many can also reach the peak levels of performance that its brand ambassadors can achieve. They include the likes of great sports champions like Flipe Massa in Formula 1, Rafael Nadal and Alexander Zverev in tennis, Bubba Watson in golf, rally driver Sébastien Loeb, and Alexis Pinturault on the ski slopes. 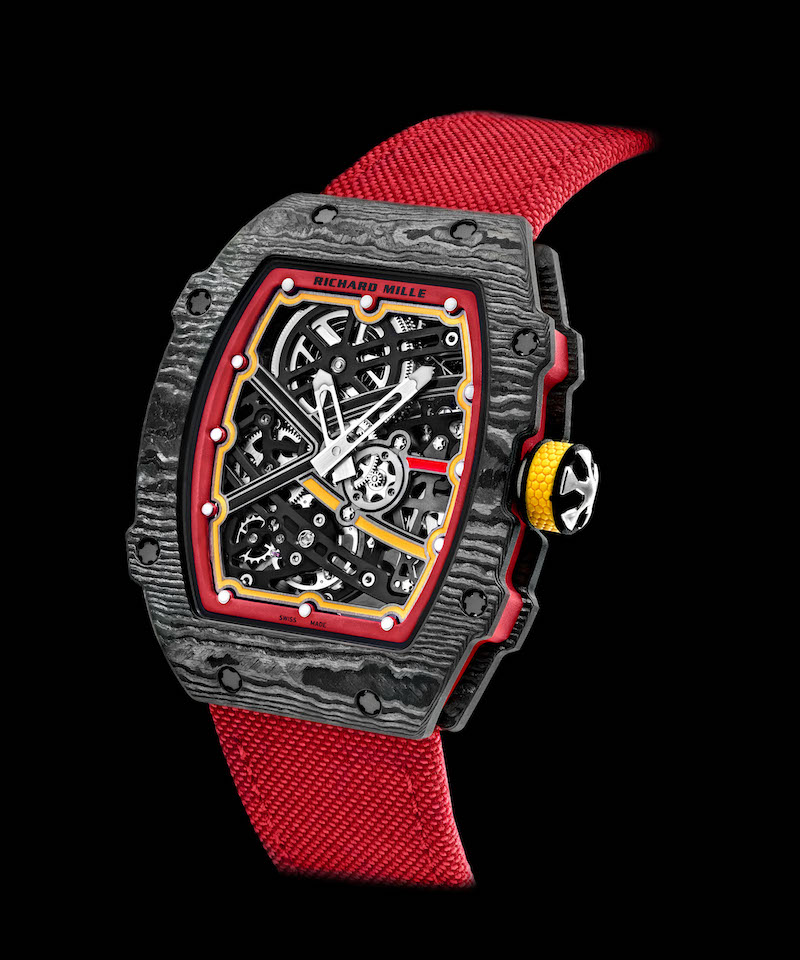 Found among the over 70 models in the brand’s collection to date, we find the RM 67-02 Automatic, dedicated to the future of men’s tennis, young and exciting German player Alexander Zverev.

For its latest addition, the brand was looking to update the ultra slim RM 67-01 and to make it more sporty. The idea was to produce a watch that could withstand the demands of even the highest performance athlete, while that athlete is actually performing. 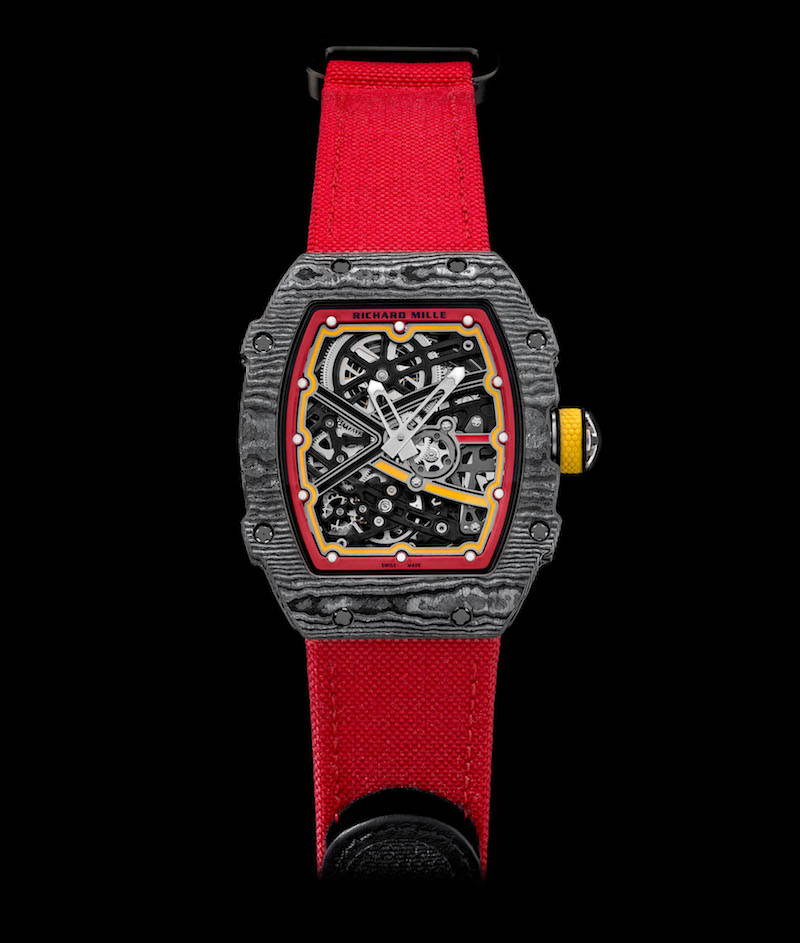 The end result is a watch that is relatively pared down, as far as Richard Mille timepieces are concerned. So the idea that “less is more” applies to the new RM 67-02 “Zverev” model. Yes, there are hours and there are minutes to indicate the time. But the true innovations lie elsewhere.

The main selling point is the lightness and resistance of the watch, which is largely thanks to the case made of Carbon TPT and red Quartz TPT. These are composite materials that are exclusive to Richard Mille and they ensure exceptional resistance to shocks, despite the very slim profile of the assembly, which measures a mere 7.80 mm thick. 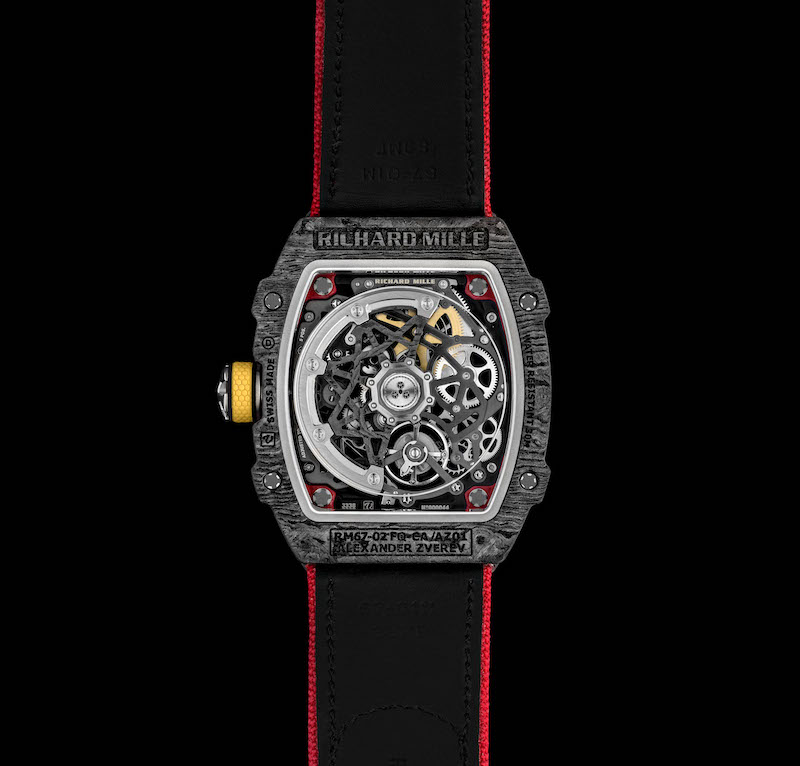 All of that is meant to protect the brand’s seventh in-house calibre, the CRMA7. A filigree rotor, crafted of Carbon TPT and white gold, drives the grade 5 titanium movement. The baseplate and bridges, crafted in the same material, are given a black and grey DLC coating. To give you an idea of the attention to detail in production, a minimum of two hours of milling was apparently required to achieve the skeletonisation of a single baseplate.

Aesthetically speaking, the lines of the movement are complemented by the dial, which is machined from a sheet of titanium only four tenths of a millimetre thick. It is finished in black DLC coating and painted, by hand of course, in the colours representing Zverev’s native country Germany. 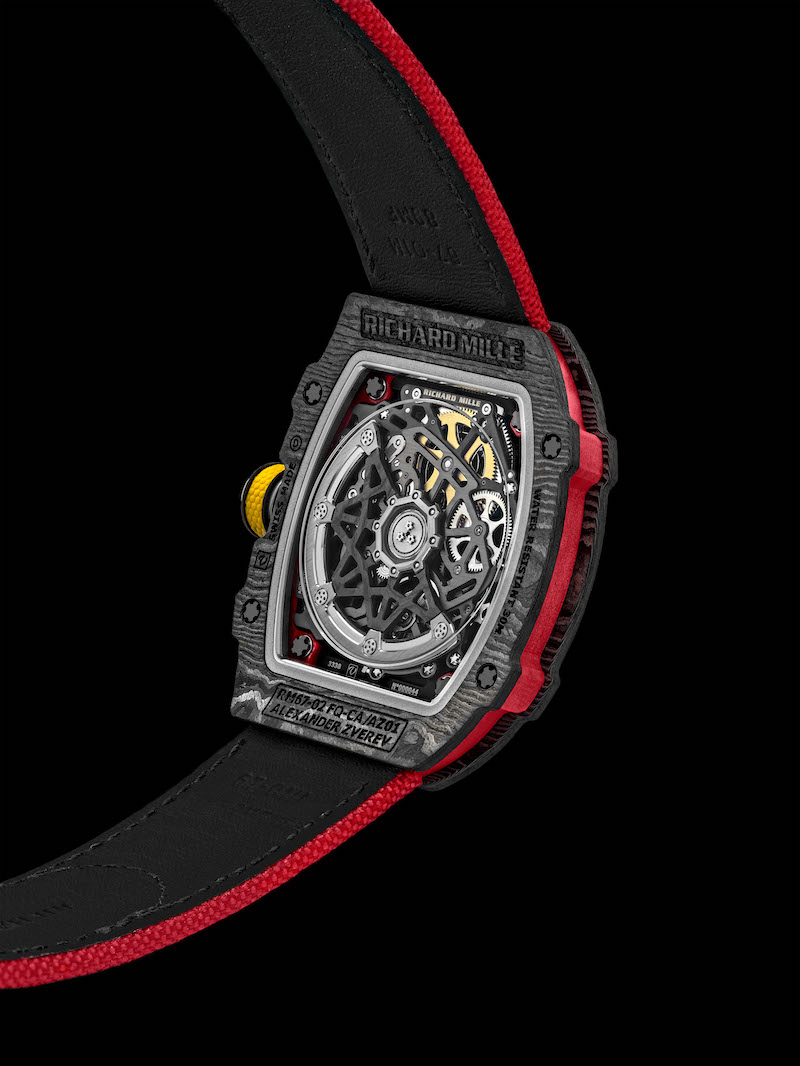 The case and movement are not the only elements that are capable of high performance here. The strap meets the same requirements as the rest of the watch, with its seamless construction and elastic qualities promising a very comfortable fit.

What’s more, the strap’s unprecedented lightness has brought the weight of the RM 67-02 down to 32 grams, making this the lightest automatic watch in the Richard Mille collection (with apologies to Rafa Nadal).

All that makes this a very impressive, agile, and high performing sports watch. Alexander Zverev has a lot of work ahead of him to make sure his performances on the tennis court can keep up.