The Première Camélia Skeleton is the culmination of the same highly rigorous watchmaking approach that Chanel has taken from the outset: merging form and function, beauty and technical execution.

The Première Camélia Skeleton is the culmination of the same highly rigorous watchmaking approach that Chanel has taken from the outset: merging form and function, beauty and technical execution.
W

hen Chanel made its watchmaking debut in 1987, with the appropriately named Première watch, the big traditional watchmakers observed the initiative with condescension and ill-concealed disdain. Yes, the Maison Chanel was prestigious, with an internationally recognised name, but in their eyes watchmaking was the historical preserve of the major Swiss houses. After all, you can’t just decide to be a watchmaker. Can you? Thirty years later, it’s obvious that Chanel’s watchmaking operation has won over the naysayers and fully earned its spurs. 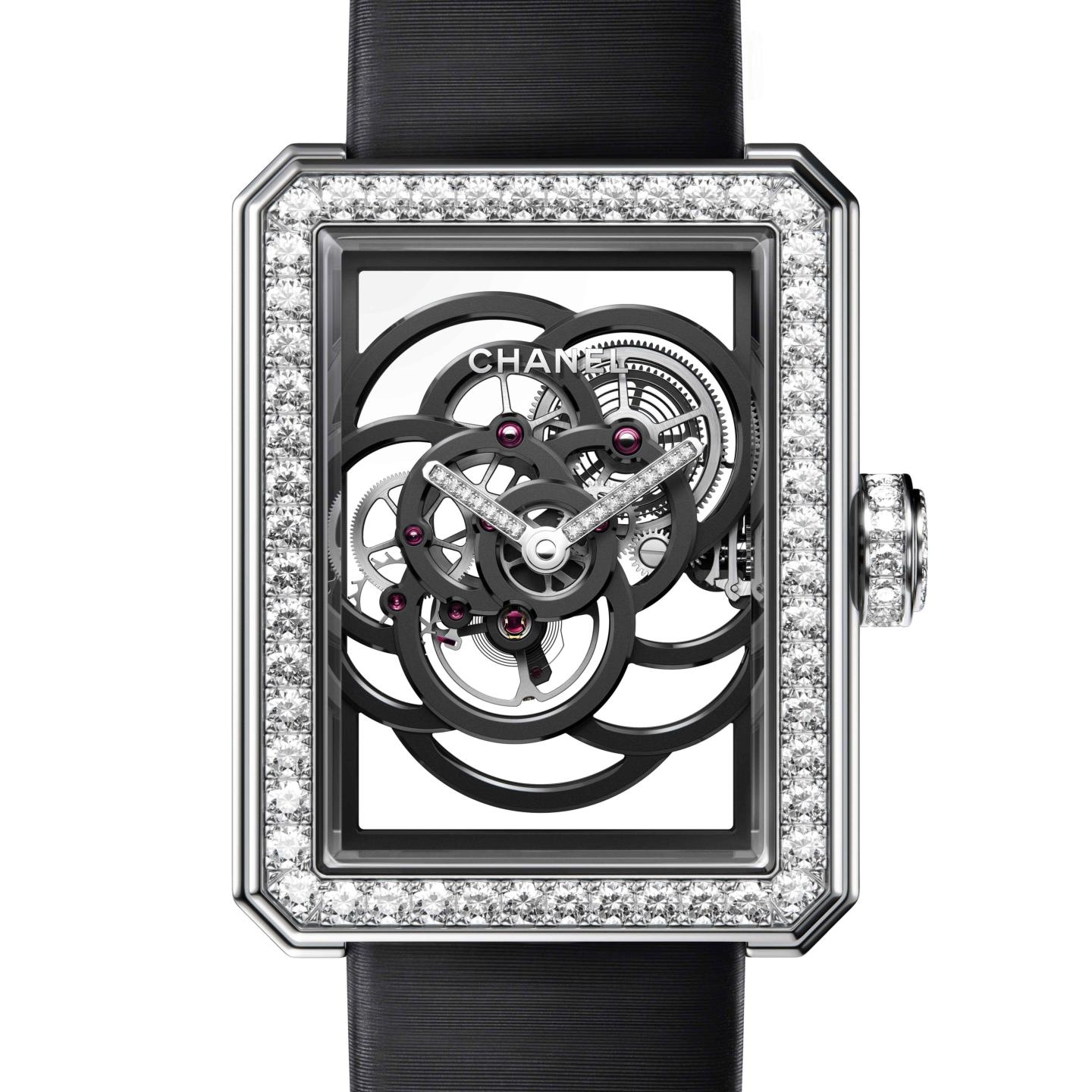 These four prizes provide a perfect illustration of the extent of Chanel’s watchmaking prowess. It’s a combination, rigorously enforced across several assiduously mastered collections, of an essential, restrained, minimalist aesthetic, with bold and distinctive codes, allied with a challenging approach to watchmaking, which together have enabled the company to gradually master the specific skills and competences required.

The road to Haute Horlogerie

In 1987, when Chanel embarked upon its watchmaking odyssey, the Maison worked closely with G&F Châtelain, a prestigious watch decoration manufacturer based in La Chaux-de-Fonds. It’s here, at the premises of this specialist gem-setter and casemaker, that all Chanel watches begin their lives.

In 1993, Chanel took the additional step of buying G&F Châtelain SA, which nevertheless retained its company name, activities and autonomy. This is where Chanel’s journey really began. Collaboration intensified between Chanel’s Studio de Création in Paris and a dedicated department within G&F Châtelain, backed up by advice from top watchmakers and artisans from outside the company.

In time, two new movements were unveiled. In 2005, the calibre Chanel 05T1 was a world first with its ceramic baseplate in black or white, something never seen before in watchmaking. Then in 2008, in collaboration with the Audemars Piguet manufacture, Chanel presented the J12 3125, whose Calibre 3125, derived from the manufacture calibre 3120, was equipped with a black ceramic rotor – another first. Forging ahead, 2010 saw the start of a collaboration with Renaud & Papi, master watchmakers and complication specialists. This would enable Chanel to pass yet another milestone on their way to Haute Horlogerie.

That year, Chanel brought out a watch whose rather unusual movement made quite a splash. It was the Chanel J12 Rétrograde Mystérieuse. This highly complex and completely new calibre incorporated a tourbillon, digital minute display and a retrograde minute hand. Why two separate minute displays? Because there’s an obstacle in the way of the natural progression of the minutes hand around the dial: an anomalous retractable vertical crown at 3 o’clock means the hand can’t go any further, and is obliged to reverse direction. While the minutes hand is moving back to its starting position on the other side of the obstacle, the digital display takes over. It had never been done before. It was a watchmaking tour de force.

Two years later, in 2012, again in collaboration with Renaud et Papi, Chanel unveiled another movement, the Chanel TVC 12. This is a flying tourbillon movement with a tourbillon cage in the shape of a camellia. That year, it made its début in the Première Flying Tourbillon Camélia, which promptly won a Grand Prix d’Horlogerie de Genève in the Ladies’ Watch category. The same flying tourbillon movement was then put into the J12 Flying Tourbillon Comète, and then, in a skeletonised version, in the J12 and in the Première Tourbillon Openwork Camélia.

In 2011, Chanel decided to take things up a gear by developing its own proprietary movements designed entirely in-house. To do that, a specific Haute Horlogerie department was set up inside G&F Châtelain. In 2016, it produced the first in-house Chanel movement, the Calibre 1.

This movement could be considered a kind of manifesto. Conceived and designed by the Studio de Création Horlogerie, the Monsieur de Chanel watch is both aesthetically and graphically stunning, due to the layout of its display and its movement. The Calibre 1 combines a jumping hour with an instantaneous retrograde minute.

This double complication, exquisitely deployed, gives the Monsieur watch a unique allure, to use one of Chanel’s special words. Both technically and aesthetically, the Calibre 1 was a taste of things to come, in terms of the new horological avenues that Chanel had now opened up.

In 2017, the Calibre 2 has provided confirmation, in the shape of the Première Camélia Skeleton Watch. 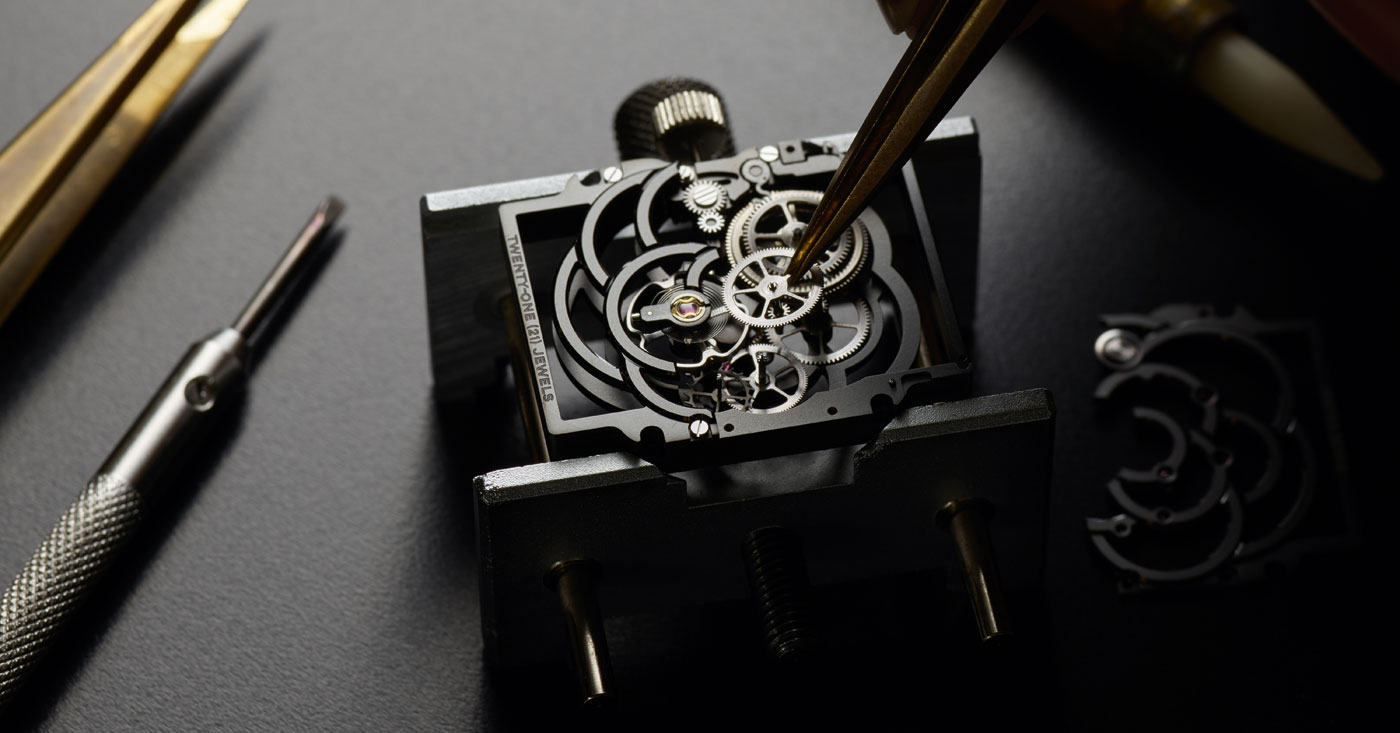 A movement in the shape of a camellia

It’s something of a cliché to talk about the relationship between form and function. But looking at the Première Camélia Skeleton Watch and its Calibre 2, it’s hard to imagine a closer correlation between mechanical function and lyrical form, working together to create a flower that tells time. This pure, poetic, vibrant, three-dimensional camellia watch is its movement. Technical and aesthetic merge into one indivisible whole. In fact, all the elements of the mechanism have been conceived, designed and arranged to produce the shape of a camellia, their technical function fading into the background, leaving only the merest trace, advertising their presence in the balance, which trembles delicately at the heart of the flower. The Calibre 2 was designed specifically for the Première Camélia Skeleton Watch, of which it is an absolutely integral part.

While the iconic motif of the camellia – Mademoiselle’s favourite bloom – was a natural and immediate choice, particularly after the success of the Première Flying Tourbillon Camélia with its camellia-shaped tourbillon cage, it took three years to design, develop, build, test and assemble this floral calibre.

This is not your traditional skeletonised watch, where the bridges, plates, sometimes even the gears, are hollowed out and pared down. Here, every component and its interactions with all the others had to be rethought, redesigned and repositioned according to rigid technical constraints and aesthetic imperatives.

Even the stepped gear train with its alternating petals takes the form of a camellia. Whether from the back or the front, all you see is a flower. To achieve this, Chanel’s watchmakers and movement makers had to recalculate the entire scenario: arrange, place and style all the components, and intercalate them just so to create a movement in the shape of a three-dimensional camellia.

In its way, the Calibre 2 marks the culmination of an approach guided by purity, simplicity and alchemy between form and function, and it is a resounding success. The Première Skeleton Camélia Watch is a horological complication in itself, a totally unique one, but the watch looks beguilingly simple and it’s perfectly legible. Its movement literally is its dial, but it is beautifully readable and effortless to use.

The intensely feminine stylised floral architecture is accentuated by the play of contrasting light and shadow – the deep black of the calibre, the flash of diamonds outlining the petals – framed by lustrous 18-karat white gold. Extreme care has been applied to the manufacture and decoration of each of its exquisitely finished components: circular brushing, diamond chamfering, polishing, rhodium plating, ADLC treatment (Amorphous Diamond Like Carbon) and gem setting.

Several versions of the Première Camélia Skeleton Watch coexist, all fashioned out of 18-karat white gold, and all set to some degree, whether on the case, on the skeletonised mainplate, the crown, the hands or the clasp. The most prestigious version (in a limited edition of 12) even has a diamond-paved bracelet.

Setting diamonds into the mainplate is a technical feat in itself. At any time, the gem-setter risks deforming the setting, thus rendering it useless, because it must be perfectly flat to do its job. It’s a supremely delicate operation, requiring meticulous attention and judicious timing, if the watch’s mechanical operation is to remain intact. For Chanel, one of the major features of the Première Camélia Skeleton Watch, beyond the technical accomplishments represented by the shape of the movement and its command of stylistic codes, is to demonstrate watchmaking excellence through the perfection of every detail. This applies not only to the technical details of the movement itself – the working and composition of its wheels and gears, the boldness of its bridges and the quality of its finish – but also in its outer covering, in terms of the choice of materials and the subtle play of contrasts, down to the Lion hallmark – Mademoiselle’s zodiac sign and a symbol of Chanel Haute Horlogerie – laser-engraved on the movement.

Thirty years after the Première made its debut, Chanel’s second completely in-house movement marks a major step forward on this unique Haute Horlogerie journey. Like the J12, the Calibre 2 shows that, over and above their performance and technical prowess, Chanel’s iconic models are relevant and modern, with a timeless style that the years do nothing to diminish, and indeed serve only to enhance. Just look at the Première Watch, whose case echoes the shape of the home of the Maison Chanel, the Place Vendôme in Paris. This great city square was designed in 1699 by Mansart, the renowned architect of Versailles, who surely could not have guessed that one day the classical lines of his creation would come to define a prestigious watch.