Since making its grand entrance into the watch industry in 1987 with the appropriately named Première, Chanel has succeeded in projecting a unique style, with precise aesthetic codes executed with exemplary consistency. And, unlike traditional Swiss watchmakers, which have historically put the movement in control, Chanel has placed the movement, the mechanism, entirely in thrall to aesthetics. Function follows form. Or, in other words, the movement is dictated by style.

Since making its grand entrance into the watch industry in 1987 with the appropriately named Première, Chanel has succeeded in projecting a unique style, with precise aesthetic codes executed with exemplary consistency. And, unlike traditional Swiss watchmakers, which have historically put the movement in control, Chanel has placed the movement, the mechanism, entirely in thrall to aesthetics. Function follows form. Or, in other words, the movement is dictated by style.
H

aving climbed the rungs of the ladder that leads to what is conventionally called Haute Horlogerie, Chanel has gained acceptance while constantly reaffirming and reiterating its abiding stylistic codes: black, white, geometric shapes, quilting, pearls, the camellia, etc.

This consistency and rigour have made each of its watch models an enduring success. The famous J12, for example, lends itself to all manner of evolutions without ever deviating from its strong and elegant personality.

The latest in line, the transgressive Boy∙Friend, demonstrates these qualities anew with the Calibre 3, which was designed specifically to fit inside the existing watch case.

This autumn, the Boy∙Friend Skeleton Calibre 3 by Chanel was awarded the Ladies Watch prize at the GPHG. Chanel won the same prize the previous year, for the Première Squelette Camélia Calibre 2. (Chanel has won a total of five GPHG Grands Prix.) So how can we explain two wins, in two consecutive years, both for skeleton-type mechanical watches, for women?

The term “skeleton” is in fact a traditional horological category, for whose introduction we can thank clockmaker André-Charles Caron who, in 1760, was the first person to do away with a dial, the better to reveal the secrets of the movement beneath. The operation known as “skeletonising” generally consists of hollowing out as much of the movement’s components and structure as possible to produce the greatest visibility, a bit like mechanical lace-making.

In the vast majority of cases, this operation is executed on an existing movement, which is pierced, cut away, lightened and adapted to produce a particular visual setting. 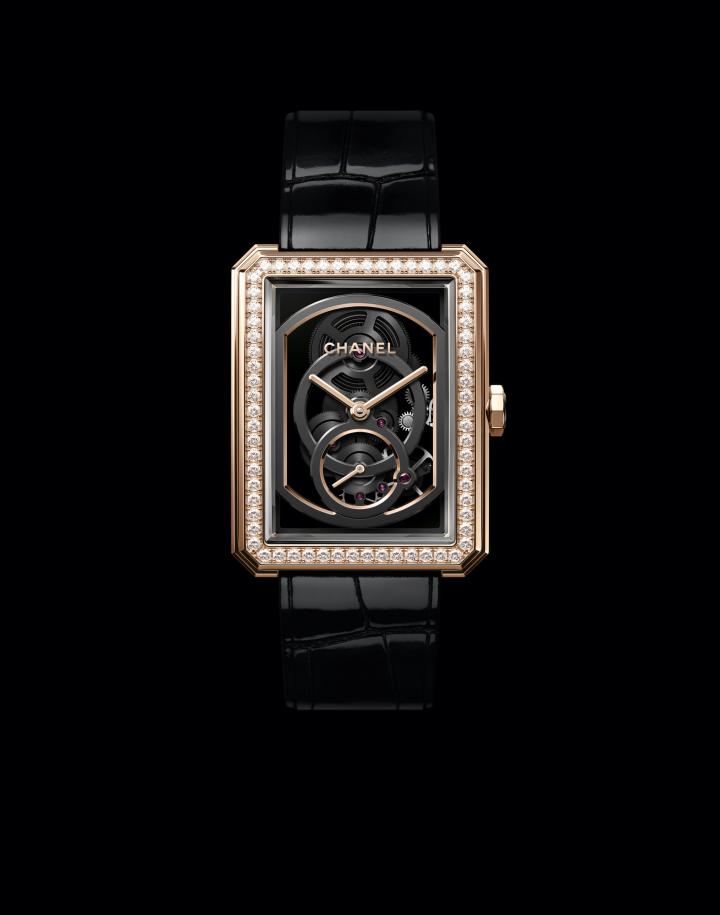 But Chanel, with its Calibres 2 and 3 that were entirely designed and created in-house, took a completely different approach.

The traditional watchmaker takes the movement as his starting point. He looks for the best way of skeletonising it, hollows out the components, adjusts its architecture and finishes the movement in accordance with the style he wants to give to the watch.

He then makes sure the case fits, and cases up the completed watch. Although this is a remarkable feat in itself, Chanel takes the opposite approach. Because of its history – the myth of Chanel, its ascendancy over the world of couture, Paris – Chanel has none of this horological baggage. What it does have is the immense legacy of Gabrielle Chanel, brilliantly preserved and enhanced by Karl Lagerfeld, and its strong and enduring identity.

Chanel takes style, not technique, as its starting point. And it’s up to the latter to adapt to the former. In this case, it meant that the movement had to be suspended inside the case of the astutely named Boy∙Friend. The collection launched in 2015 has an androgynous style – some have even called it transgender. It’s a man’s watch, intended for women; women who are now as knowledgeable about mechanical watchmaking as men, but who nevertheless prefer not to have their aesthetics overshadowed by technical considerations. 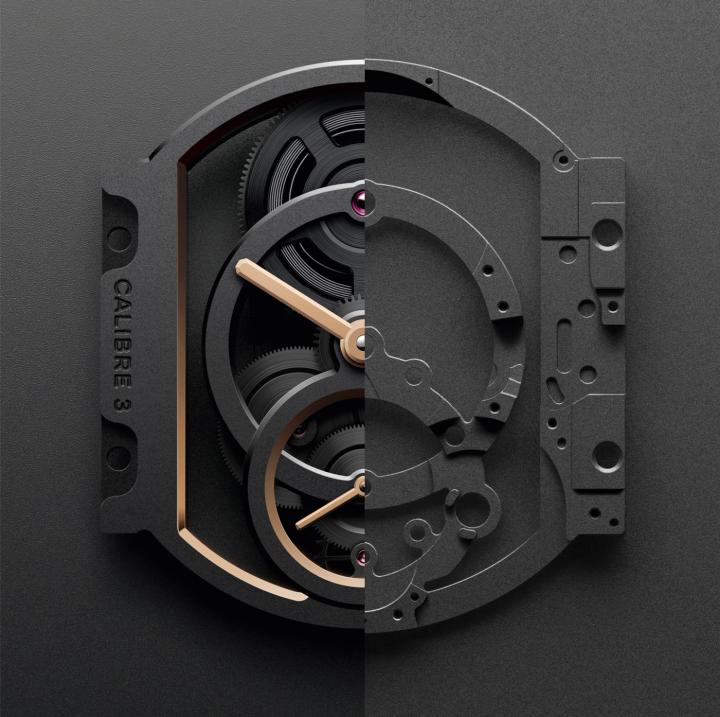 For Chanel’s Watchmaking Studio of Creation, which is where every project begins, the skeleton movement had to conform to the octagonal case shape with its truncated corners. It also had to appear to be floating inside the case. And as no such movement existed, it had to be created from scratch. Throughout this creative process, the inventiveness and artistry of the watchmakers was dictated by design. This process raised several mechanical conundrums, and led to some cutting-edge research. It took three years to complete.

According to the design brief, the movement was not supposed to disappear entirely; it was merely to fade into the background behind three vertically aligned overlapping circles: three circles that gave the structure its design; three circles that represented the watch’s essence – from top to bottom, the energy accumulated in the barrel spring, the hours and minutes, and the small second; three circles that dictated the architecture of the movement. All the complex interplay of wheels and gears, adjustments and winding had to be built and arranged to fade into the background, to pull back and leave centre stage to those simple but graphically dominant circles.

The movement was built around a linear construction, which meant that all its components had to be redesigned and readjusted. It’s black, all its wheels are solid discs, and there are no visible screws. All that is visible, partially revealed behind the circular bridges, is the heart of the Calibre 3: its escape wheel and balance spring. In order to avoid spoiling the view with the oscillating weight of an automatic, this watch is hand wound. When the crown is turned, a diminutive gear train of slim wheels – the only ones that can be seen – springs into action to send energy into the barrel spring. 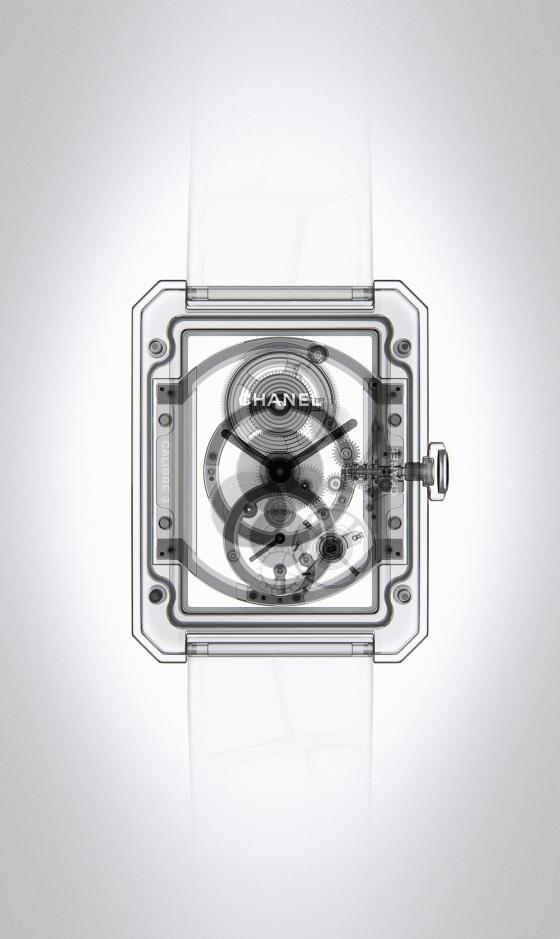 Thus, the Calibre 3 appears to be suspended inside its natural setting, sandwiched between two bevelled sapphire crystals. The beige gold case and the black movement with its gilded edges form a single indivisible whole, a vision of lightness and coherence.

The long road to aesthetic coherence

But in order for the style to come through and coherence to be achieved, considerable skill is needed, and cutting-edge research must sometimes be undertaken to find the best technical solution. The disc wheels, designed by stylists, are a good example. They venture beyond mere functionality to play an additional aesthetic role, underpinning the three circles that dominate and structure the design.

It’s not by chance that most wheels used in watchmaking have spokes. They provide strength and stiffness, and help to keep them perfectly flat. The disc wheels that characterise the Calibre 3 are difficult if not impossible to execute using traditional techniques, which is why here they have been created via 3D printing, by a procedure known as galvanic growth. It’s a complex technological procedure that has apparently never before been used for watch movement parts.

Another stylistic element that threw up a considerable technical challenge was the finish of the suspended bridges, which are in a harmonious combination of black ADLC (amorphous diamond-like carbon) coating, and chamfered edges galvanised with beige gold. This single element is subjected to two different treatments, which must seamlessly dovetail together. The ultimate aim is that, stylistically, the movement, bezel and case should form a single sculpture, and the shapes should be defined by just two colours – the unusual muted glow of 18k beige gold, against the black surface treatments. There’s also the diamond bezel that frames the jewellery version of the Boy∙Friend Skeleton Calibre 3. 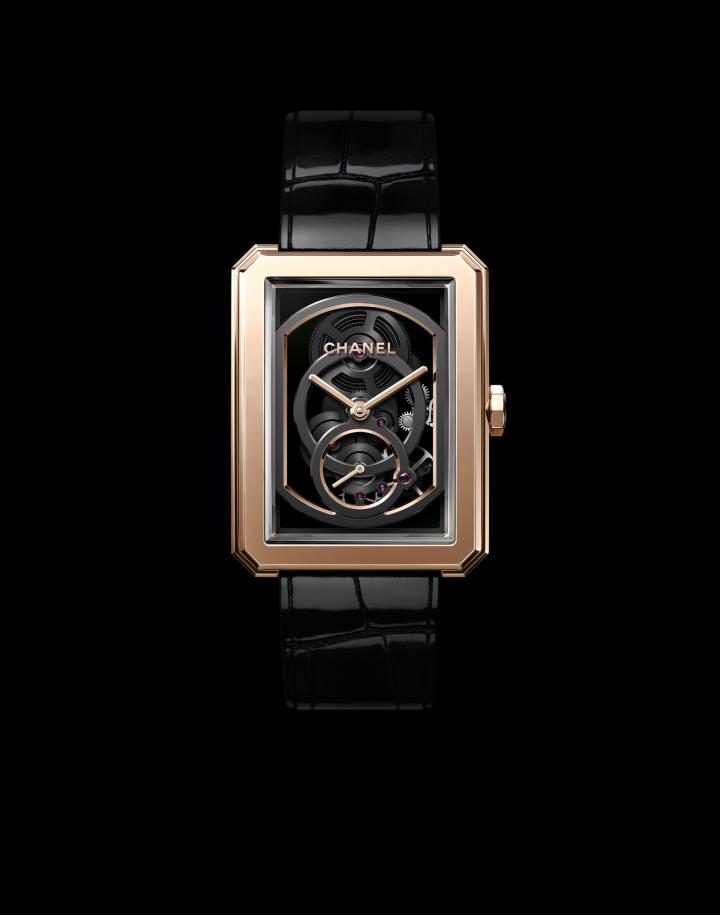 On its introduction at the Baselworld 2018 watch fair, the Boy∙Friend Skeleton Calibre 3 immediately earned kudos for its horological relevance and its confident styling. It speaks not only to the superlative technical prowess of Chanel’s watchmaking teams, but also to the faultless good taste that defines Chanel’s style and makes it so timeless. But the most valuable verdict is probably that delivered by those women for whom this witty and sophisticated Boy∙Friend is intended, and who see in this “transgender mechanical skeleton” a formal purity that will never go out of style.