Uniting electronic, atomic, and mechanical systems, URWERK’s latest creation is much more than just a “timepiece”. It is a fusion of centuries, technologies and inventions, linking the intuitions of Abraham Breguet directly to the sharp precision of atomic clocks. In this first part of a series on the Atomic Mechanical Control, we highlight the origin and main features of this disruptive creation.

Uniting electronic, atomic, and mechanical systems, URWERK’s latest creation is much more than just a “timepiece”. It is a fusion of centuries, technologies and inventions, linking the intuitions of Abraham Breguet directly to the sharp precision of atomic clocks. In this first part of a series on the Atomic Mechanical Control, we highlight the origin and main features of this disruptive creation.
W

e had the chance to have a first glimpse of this formidable invention last year. URWERK describes this project as its “most ambitious and perilous venture”. While we are used to an (often too) emphatic tone in the watch industry, this label is not exaggerated; it’s fully deserved. The Atomic Mechanical Control (AMC) bridges concepts that our minds wouldn’t automatically associate. Basically, it all comes down to one question: how could a mechanical movement, with its physical vulnerability, ever equal the performance of a piezoelectric quartz oscillator? The answer was uncertain… until the AMC came to life. This hybrid timekeeping construction consists of two autonomous, but linked, systems. The first part is a fixed base unit, a 35kg aluminium- housed atomic clock with roughly the same dimensions as a mid-sized computer tower. The second part is a mobile unit, a purely mechanical watch that can be worn on the wrist or securely docked within the base unit. 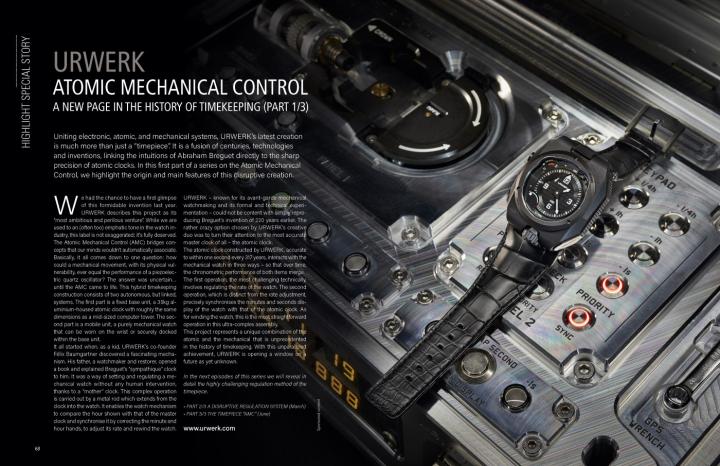 It all started when, as a kid, URWERK’s co-founder Félix Baumgartner discovered a fascinating mechanism. His father, a watchmaker and restorer, opened a book and explained Breguet’s “sympathique” clock to him. It was a way of setting and regulating a mechanical watch without any human intervention, thanks to a “mother” clock. This complex operation is carried out by a metal rod which extends from the clock into the watch. It enables the watch mechanism to compare the hour shown with that of the master clock and synchronise it by correcting the minute and hour hands, to adjust its rate and rewind the watch. URWERK – known for its avant-garde mechanical watchmaking and its formal and technical experimentation – could not be content with simply reproducing Breguet’s invention of 220 years earlier. The rather crazy option chosen by URWERK’s creative duo was to turn their attention to the most accurate master clock of all – the atomic clock.

The atomic clock constructed by URWERK, accurate to within one second every 317 years, interacts with the mechanical watch in three ways – so that over time, the chronometric performance of both items merge. The first operation, the most challenging technically, involves regulating the rate of the watch. The second operation, which is distinct from the rate adjustment, precisely synchronises the minutes and seconds display of the watch with that of the atomic clock. As for winding the watch, this is the most straightforward operation in this ultra-complex assembly.

This project represents a unique combination of the atomic and the mechanical that is unprecedented in the history of timekeeping. With this unparalleled achievement, URWERK is opening a window on a future as yet unknown.

In the next episodes of this series we will reveal in detail the highly challenging regulation method of the timepiece.