Combining watchmaking with scientific discovery, TAG Heuer introduces a state-ofthe- art hairspring made of a carbon composite in the latest interpretation of the Carrera.

Combining watchmaking with scientific discovery, TAG Heuer introduces a state-ofthe- art hairspring made of a carbon composite in the latest interpretation of the Carrera.
T

AG Heuer unveils its newest innovation and a world premiere in watchmaking: a hairspring made of a carbon composite. The new component regulates the Heuer 02T manufacture movement, which meets the official chronometer standards and is fitted with a tourbillon. Quite simply, this timepiece represents the next generation of tourbillon watches. 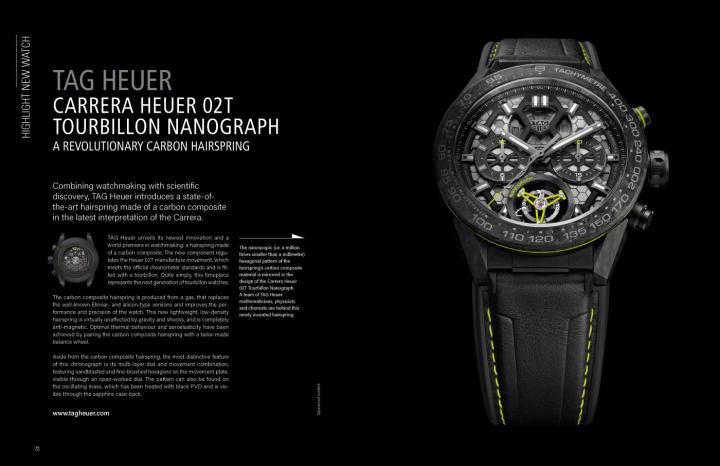 Click on the image to enlarge PDF
The nanoscopic (i.e. a million times smaller than a millimetre) hexagonal pattern of the hairspring’s carbon composite material is mirrored in the design of the Carrera Heuer 02T Tourbillon Nanograph.
A team of TAG Heuer mathematicians, physicists and chemists are behind this newly invented hairspring.

The carbon composite hairspring is produced from a gas, that replaces the well-known Elinvar- and silicon-type versions and improves the performance and precision of the watch. This new lightweight, low-density hairspring is virtually unaffected by gravity and shocks, and is completely anti-magnetic. Optimal thermal behaviour and aeroelasticity have been achieved by pairing the carbon composite hairspring with a tailor-made balance wheel.

Aside from the carbon composite hairspring, the most distinctive feature of this chronograph is its multi-layer dial and movement combination, featuring sandblasted and fine-brushed hexagons on the movement plate, visible through an open-worked dial. The pattern can also be found on the oscillating mass, which has been treated with black PVD and is visible through the sapphire case-back.