Pierre Jaquet-Droz’s heritage is alive and well in a highly contemporary way: incredible timepieces such as the latest Loving Butterfly Automaton demonstrate it.

Pierre Jaquet-Droz’s heritage is alive and well in a highly contemporary way: incredible timepieces such as the latest Loving Butterfly Automaton demonstrate it.
“O

ur goal is straightforward: we want to be the best in our very specific segment.” As CEO Christian Lattmann explains, Jaquet Droz is increasingly focusing on three main pillars: the Grande Seconde collection, the Métiers d’Art and the Automata.

The latter were revived in 2012 with the launch of the first limited series of Bird Repeater wristwatches. Several impressive automaton timepieces followed, notably the Charming Bird, the Lady 8 Flower, the Tropical Bird, the Magic Lotus, as well as 2020’s version of the Loving Butterfly Automaton.

From 26 November the Swiss brand will participate in an exhibition at the MUDEC in Milan called “Robot. The Human Project”, displaying some of its most impressive historical automata, such as a songbird from 1790, a cage for animated birds from 1780 and a pocket watch with a songbird from 1785. A book will be published to celebrate the 300th anniversary of the birth of its founder next year.

The contemporary Jaquet Droz timepieces assume this heritage while giving it a modern twist. “Ultimately, we strive for beauty in everything we do,” says Christian Lattmann. “Since 2012, we have formed the teams that have the ability to pursue this exclusive craft that I call the art of wonder. We managed to overcome several challenges to fit automata inside wristwatches, including the need to miniaturise, or the inherent fragility of these three-dimensional constructions that strike our senses.”

The new Loving Butterfly Automaton limited series features an exquisite mineral dial made of Chinchilla Red, a wood petrified 150 million years ago. This animated objet d’art is inspired by the drawing “Butterfly Driven by Love”, which was sketched in 1774 by The Draughtsman, an automaton created by Henri-Louis Jaquet- Droz. When the butterfly’s wings and the chariot’s wheel start moving, the magic begins… 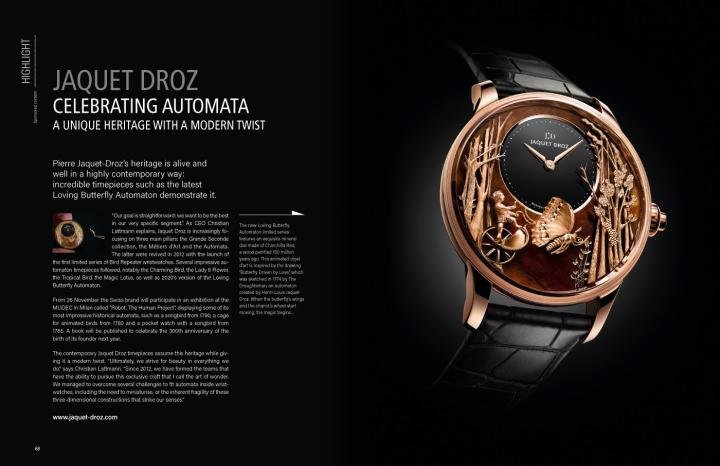