Breguet: style in the service of time


The new Classique Calendrier 7337 by Breguet is the most recent expression of the relevance of a stylistic vocabulary that supports a technical ethos, as defined almost 250 years ago by Abraham-Louis Breguet.

Breguet: style in the service of time

The new Classique Calendrier 7337 by Breguet is the most recent expression of the relevance of a stylistic vocabulary that supports a technical ethos, as defined almost 250 years ago by Abraham-Louis Breguet.
T

he unparalleled esteem in which Abraham-Louis Breguet continues to be held is a consequence of his mechanical genius, and the many inventions and innovations with which, over two centuries ago, he reoriented the history of watchmaking, ushering in a maturity that persists to this day.

But this technical legacy would not have been so influential, were it not accompanied by an exceptional aesthetic sensitivity. The style through which he expressed his mechanical genius was pure, focused and radical. Its strength came quite simply (if I may put it that way) from the way in which he placed aesthetics in the service of the functionality of the timepieces he created.

More than two hundred years before the Bauhaus school developed the famous concept of “form follows function”, he was applying the maxim intuitively. The elegance of his creations, his sense of proportion and the sophistication of his decorations are derived directly from the application of the tenet that aesthetics are the formal expression of engineering.

The evidence is there in every detail of the Breguet style, many of which have entered the watchmaking lexicon: Breguet hands, Breguet numerals, Breguet dial and, of course, the Breguet overcoil hairspring – all of which are now generic terms, used by watchmakers every day.

More than two hundred years before the Bauhaus school developed the famous concept of “form follows function”, he was applying the maxim intuitively.

A keen sense of detail

Let’s take a closer look at the example of the Breguet hands. Before Breguet, watch hands were elaborate, ornate and imposing, following the example of the clock tower hands that had to be visible from far away. Breguet, whose focus was on chronometric performance, wanted them to be precise, as slim as possible, and immediately distinguishable from each other.

Using blued steel or gold, he added the circular outline, the “apple” that gracefully highlighted the hands’ steady progress around the dial. It was the same for the dial. His chose a subtle guillochage motif specifically to improve legibility. Discreet textural variations make it possible to distinguish perfectly between the different time indication zones, while unifying them in a single surface, making them clearly and immediately legible. 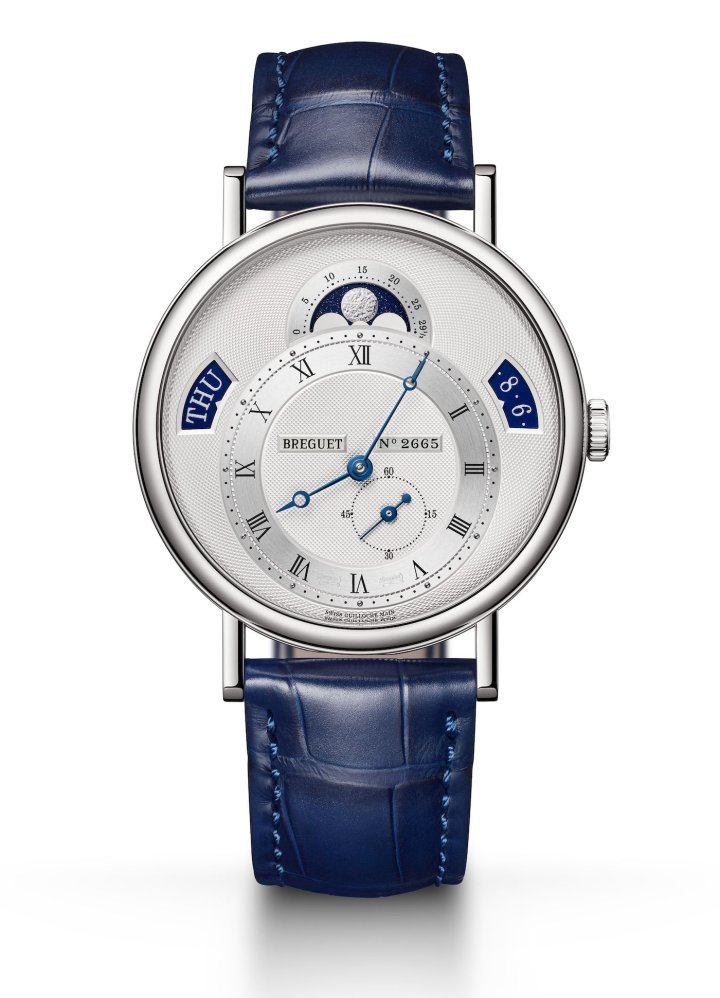 When, for his simple three-handed watches, he opted for the purest surface possible – a simple expanse of enamel – it was for the same reason: optimum legibility. There was no ornamentation save for the graceful Breguet numerals, the gently leaning Arabic figures that are both highly readable and exquisitely elegant. Visual clutter was Breguet’s enemy. In his pursuit of clarity, and a felicitous solution to the puzzle of competing indications on the watch face, he drew inspiration from the apertures used in grandfather clocks. He was the first person to introduce a miniaturised version for his complicated watches, where they showed the date, month, weekday and moon phase.

The goal of providing the most intuitive reading possible was also behind the off-centre arrangement of his dials. He played around with relocating the seconds display away from that of the hours and minutes, and he moved the moon phase indication to its own zone, flanked by two calendar windows. The eye immediately finds what it’s looking for. 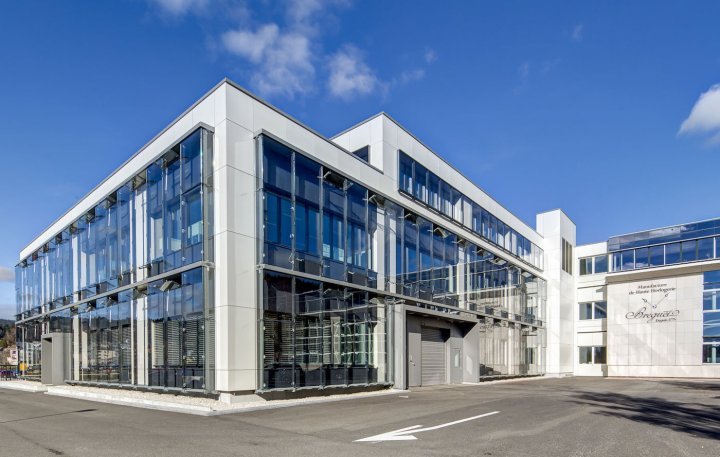 The iconic and supremely elegant fluting around the caseband no doubt comes from a heightened aesthetic sensibility, and a desire to further refine the profile of his watches, which were an antidote to the more cumbersome trends of his time. But here, too, form follows function – the fluting also provides a more secure hold for the fingers, when removing the watch from a pocket. And there’s another small but very important detail: the fluting also prevents the surface of your beautiful watch being marred by fingerprints.

Breguet’s legacy is laid out for all to see, in the perfectly balanced accommodation between the demands of the internal mechanics and their finest aesthetic expression. Abraham-Louis Breguet created a complete vocabulary that has profoundly enriched and inspired the grammar of watchmaking. His style has such a strong identity that it remains immediately recognisable, even today.

Visual clutter was Breguet’s enemy. There was no ornamentation save for the graceful Breguet numerals, the gently leaning Arabic figures that are both highly readable and exquisitely elegant.

All the codes defined by Abraham-Louis Breguet can be found in the Classique collection, as seen in the supremely elegant new Classique Calendrier 7337. Both faithfully traditional and fully contemporary, this timepiece displays hours and minutes on an off-centre dial with an off-centre small seconds register at 5 o’clock. Above the main dial at 12 o’clock sits a hemispherical moon phase display flanked by two generous windows showing the day at 10 o’clock and the date at 2 o’clock. 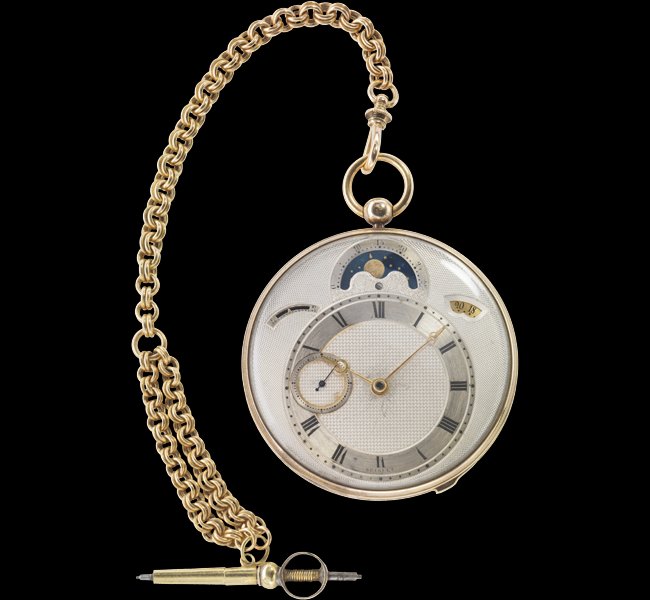 This layout is directly inspired by the Breguet No. 3833, first sold on 12 May 1823. The only notable difference in the dial configuration is that the small seconds register has been relocated from 9 to 5 o’clock, making it more easily readable on a wristwatch. Breguet’s mastery of handcrafted guillochage is played out on the gold dial. The off-centre dial presents a delicate clous de Paris motif, while the exterior is decorated with a circular barleycorn pattern that creates an illusion of expansion. At 12 o’clock, the gently irregular surface of the moon in hand-hammered gold peeks out between matt and sand-brushed clouds. The sky, against which the moon stands out in relief, is lacquered in dark blue, spangled with stars that twinkle softly.

Hours, minutes and seconds are indicated at the slender tips of the traditional “apple” hands in blued steel, a house signature. The typography is a play of contrasts between the Breguet numerals that frame the moon phase, the Roman numerals on the brushed gold hours and minutes dial, and the Breguet numerals visible once again on the small seconds register. The final traditional detail on the dial is the two cartouches bearing the Breguet name and the watch’s unique serial number.

All the codes defined by Abraham-Louis Breguet can be found in the Classique collection, as seen in the supremely elegant new Classique Calendrier 7337. Its layout is directly inspired by the Breguet No. 3833, first sold on 12 May 1823. 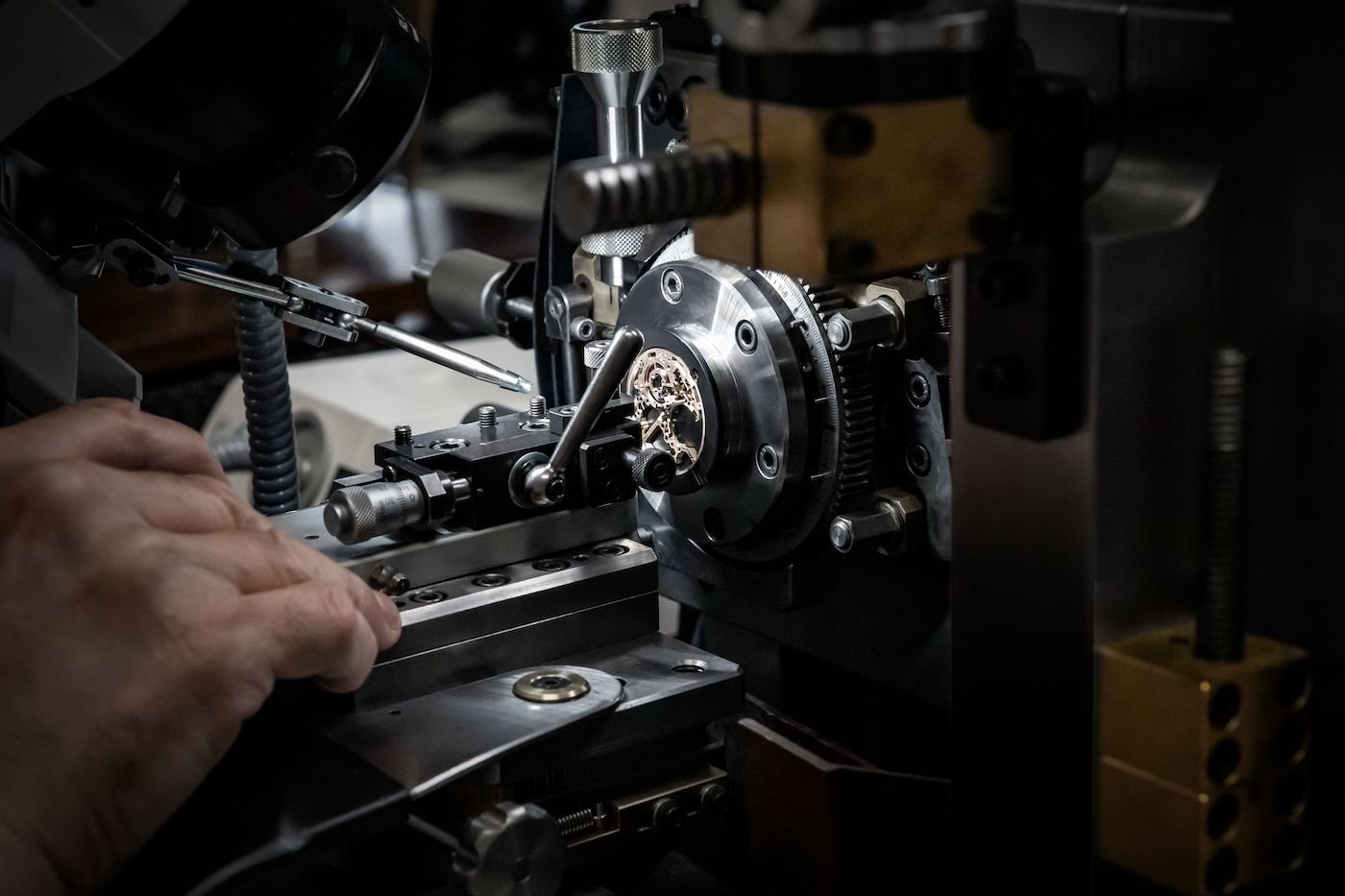 For Abraham-Louis Breguet, it was all about proportion, and that was directly related to his obsession with legibility. In order to make the dial as uncluttered as possible, the bezel had to be as slim as possible. Ensuring the watch was supremely comfortable for its owner to hold – or to wear, in the case of a wristwatch – meant reducing bulk and simplifying the shape. 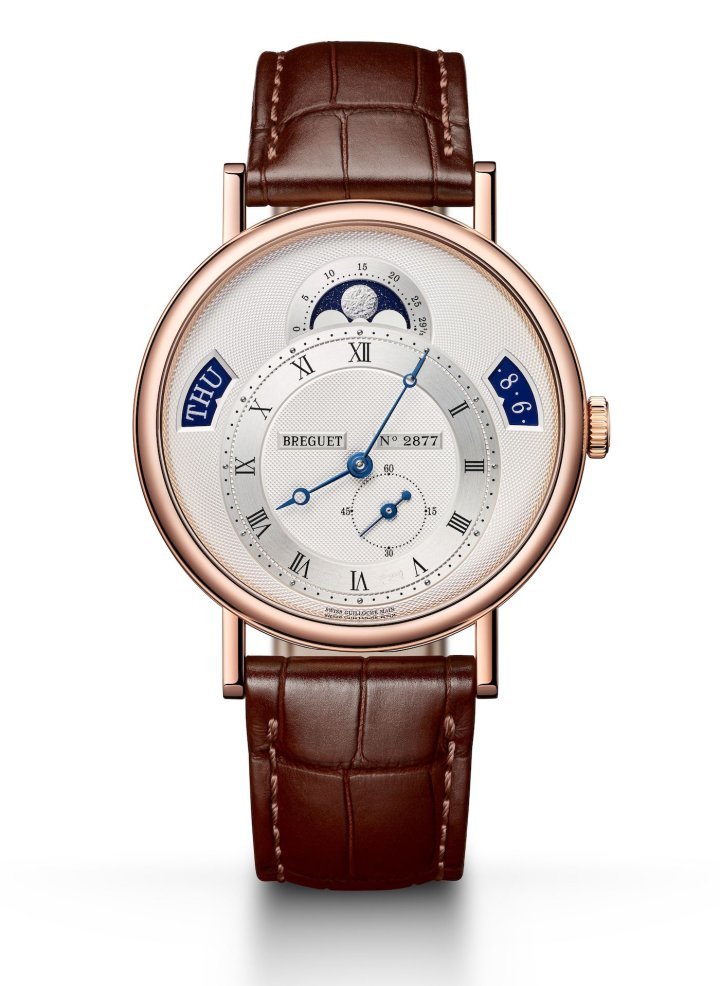 The caseband of the new Classique 7337, in 18K white or rose gold, with a diameter of 39 mm and a depth of 9.95 mm, is engraved with the famous and functional fluting. The watch face is subtly framed by the slender and discreet rounded lugs, which are soldered to the case in the traditional fashion, providing a feeling of robustness and security, along with a pleasing sense of proportion between the lugs and case.

In order to make the dial as uncluttered as possible, the bezel had to be as slim as possible. Ensuring the watch was supremely comfortable for its owner to hold – or to wear, in the case of a wristwatch – meant reducing bulk and simplifying the shape.

The self-winding calibre 502 driving the Classique Calendrier 7337 draws from the same aesthetic vocabulary as the dial. Its oscillating weight in white gold is also off-centre, with a handcrafted circular barleycorn guilloché finish. The eccentric position is not just about aesthetics; it’s also a way of making room for the main movement components.

Indeed, the 502 movement, which beats at 3 Hz and supplies a power reserve of 45 hours, is one of Breguet’s flattest, with a thickness of just 2.4 mm. In order to reduce depth, the barrel remains open, and the 236 components are fitted into the smallest possible space. Performance is further optimised by the use of a silicon balance spring and an inverted straight-line lever escapement with silicon pallets. 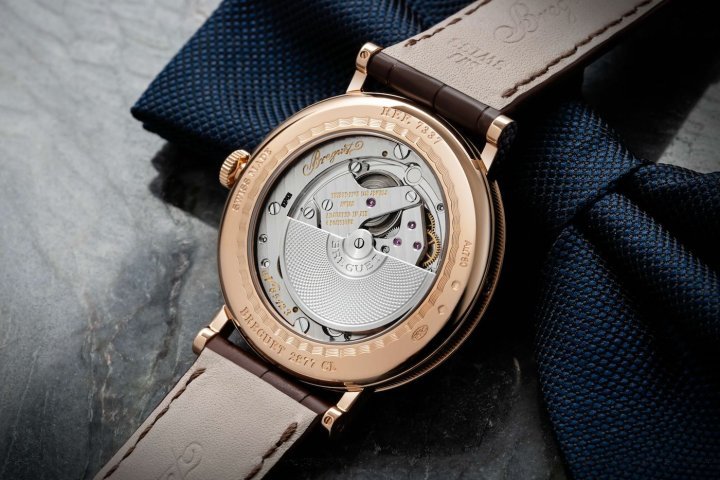 In his day, Abraham-Louis Breguet relentlessly pursued improvements to performance, and he would undoubtedly have adopted cutting-edge silicon technology if it had been available, given that it provides superior resistance to corrosion, wear and magnetic fields, as well as guaranteeing enhanced precision.

The chamfered angles of the movement parts, their delicate Côtes de Genève decoration, and their compact architecture can be admired through the sapphire crystal set into the case back.

The self-winding calibre 502 driving the Classique Calendrier 7337 draws from the same aesthetic vocabulary as the dial. Its oscillating weight in white gold is also off-centre, with a handcrafted circular barleycorn guilloché finish. 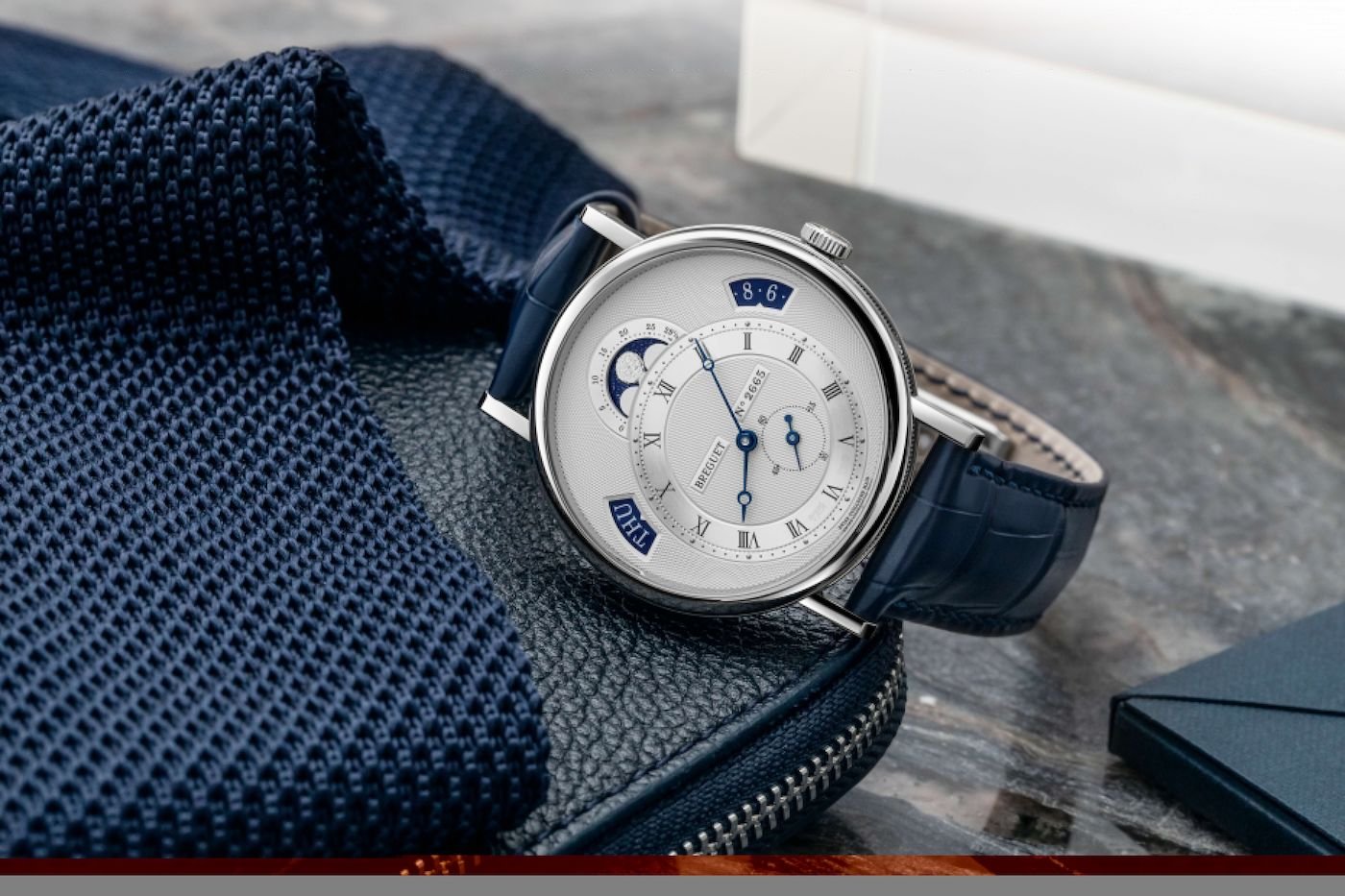 “The elegance of the shapes, the choice and proportions of fillets and mouldings, the effect of the rounded edges of the case and the flattened crystal, the delicacy of the guilloché dials and the lightness of the hands, the opposition of matt and polished metals, are what distinguish our pieces,” Abraham- Louis Breguet declared, explaining the stylistic principles behind his watchmaking. 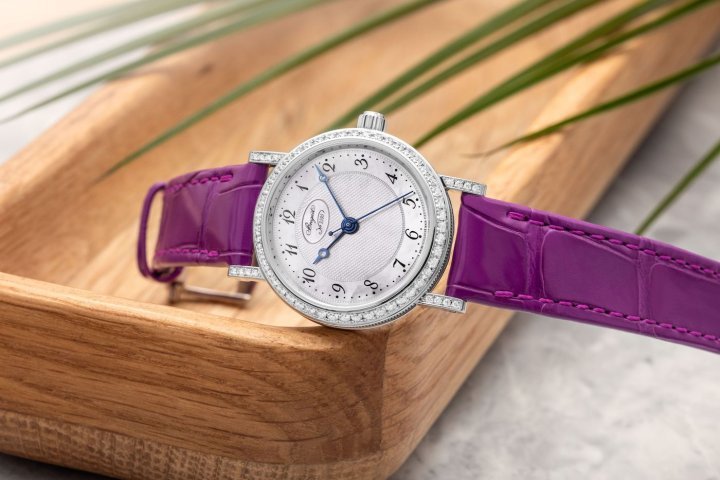 The new Classique Dame 8068 features a mother-of-pearl dial with a delicate hand-worked guillochage motif in the centre, surrounded by a chapter ring with Breguet Arabic numerals that lend it a visual delicacy that is simultaneously classic, modern and refined. The bezel and lugs of the 30 mm case, in white or rose gold, are set with 64 brilliant-cut diamonds. A diamond cabochon is set into the crown.

In 2025, Breguet the company will celebrate its 250th anniversary. Lionel a Marca, its CEO since August 2021, himself a watchmaker and a complications specialist, stated recently in our pages, “We are part of this long time horizon. One of the next important milestones will be the celebration in 2025 of the 250th anniversary of the founding of the Breguet maison.”

It’s an extremely rare anniversary in the watch industry – proof that Breguet’s ‘vocabulary’ is as relevant today as it ever was. 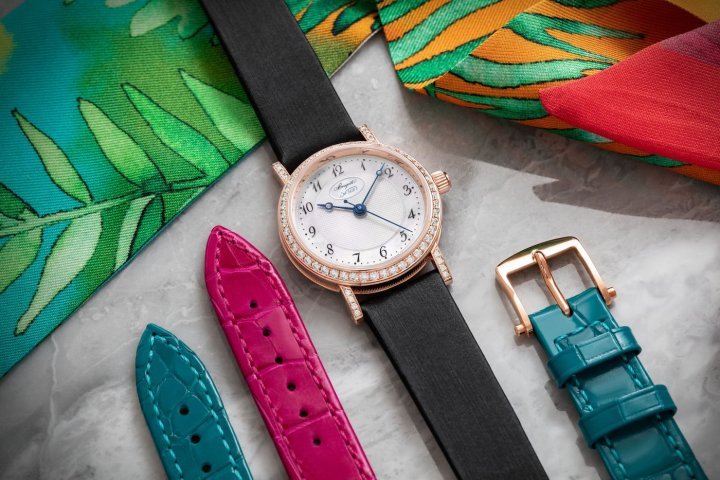 For the first time in a Breguet collection, the Classique Dame 8068 comes with three interchangeable straps: one in black satin, and two in alligator (teal blue and Byzantium purple for the white gold version, and peacock blue and raspberry pink for the rose gold version) with a gold buckle. The ingenious rapid interchange system means the straps can be switched in seconds without the need for tools. Automatic calibre 537/3 with hand-engraved guillochage, Swiss lever escapement with silicon balance spring. 45-hour power reserve.