The Lucerne manufacture is making a key strategic transition: while continuing to maintain its most popular collections, it will turn its focus to Haute Horlogerie. A brand new business unit, the CFB Mastery Lab, will be dedicated exclusively to made-to-measure projects. These reorientations are the culmination of several years’ reflection in an increasingly demanding market, and the first in a series of strategic announcements.

The Lucerne manufacture is making a key strategic transition: while continuing to maintain its most popular collections, it will turn its focus to Haute Horlogerie. A brand new business unit, the CFB Mastery Lab, will be dedicated exclusively to made-to-measure projects. These reorientations are the culmination of several years’ reflection in an increasingly demanding market, and the first in a series of strategic announcements.
T

oday’s watch market seems to be split into two parts. On the one hand, there are the blockbuster models that often generate very long waiting lists, and serve as the locomotive for the entire industry. After all, they generally provide newcomers with their first point of contact with the world of watchmaking. And then on the other, there’s a craze for models that are unique and highly exclusive, as collectors seek to establish a direct relationship with the creator. This helps to explain the success of the independent watchmakers (who, faced with growing demand, are increasingly also resorting to waiting lists).

Forced to choose between volume and value, the Swiss watchmaking industry appears to have made its decision. Each year, the number of watches exported goes down, while the average price rises – a trend further accelerated by the smartwatch’s recent conquest of the entry-level segment. In light of this general trend, some historic Swiss brands have adopted radical strategies. Jaquet Droz, for example, now only works by special order and has withdrawn from its retail network in favour of individual contact with a very privileged clientele.

As the passion for collectible watches has soared in recent years, many brands stand at a crossroads in terms of which development strategy to pursue. Should they continue to promote “mass-produced” models with multiple references? Or focus on a smaller number of highly individualised models? Should customers be offered a role in their creation? And are there hybrid paths between these different strategies?

As the passion for collectible watches has soared in recent years, many brands stand at a crossroads in terms of which development strategy to pursue.

An exclusive strategy for brand differentiation

Among the brands that have explored this theme behind the scenes is Carl F. Bucherer. Its profile is unusual for a watch brand. Through its links to the famous watch and jewellery retailer, its roots go back to 1888, but its revival as a watch brand was relatively recent. It is anchored in the centre of Switzerland, in Lucerne, rather than in the Jura Arc traditionally associated with watchmaking. Its R&D is centred around the peripheral oscillating weight, a feature used only rarely by other brands, which powers a range of Haute Horlogerie products including perpetual calendars, tourbillons and minute repeaters. These timepieces help the brand to stand out in the contemporary Swiss watchmaking landscape.

“What is probably most relevant for the future of our brand is the establishment and continuous further development of our own manufacture in Lengnau, which opened in 2016,” emphasises Uwe Liebminger, Chief Marketing Officer. “We see great potential to really flourish in the most high-end segment of watchmaking.” From now on, the brand will place greater emphasis on developing the more complicated models within its collections, without abandoning its most popular series. 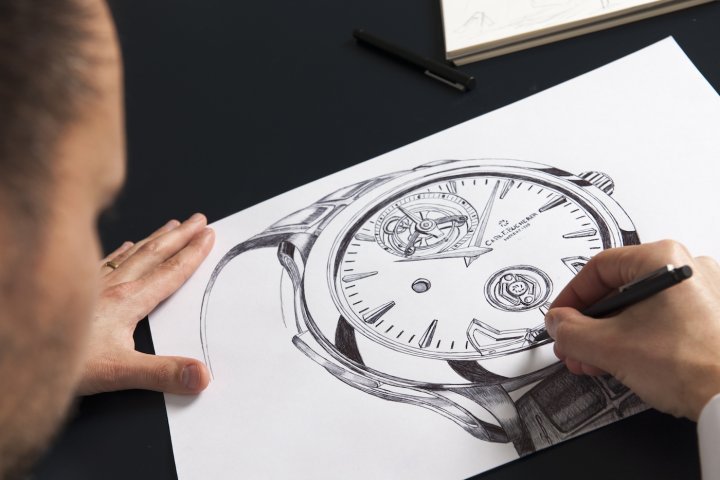 Taking advantage of the capabilities offered by its own manufacturing workshops, Carl F. Bucherer is launching a new unit, the CFB Mastery Lab, that offers collectors the possibility to design their own timepiece.

As part of this strategic reorientation, the brand also intends to involve its customers in the creation process, a concept named the “CFB Mastery Lab”. How does this differ from the customisation options many brands already offer? “Customisation is based on suggestions from the brand, which offer a predefined number of modifications,” replies Uwe Liebminger. “We want to impose as few limits as possible on customers. We won’t tell them what they cannot have.” 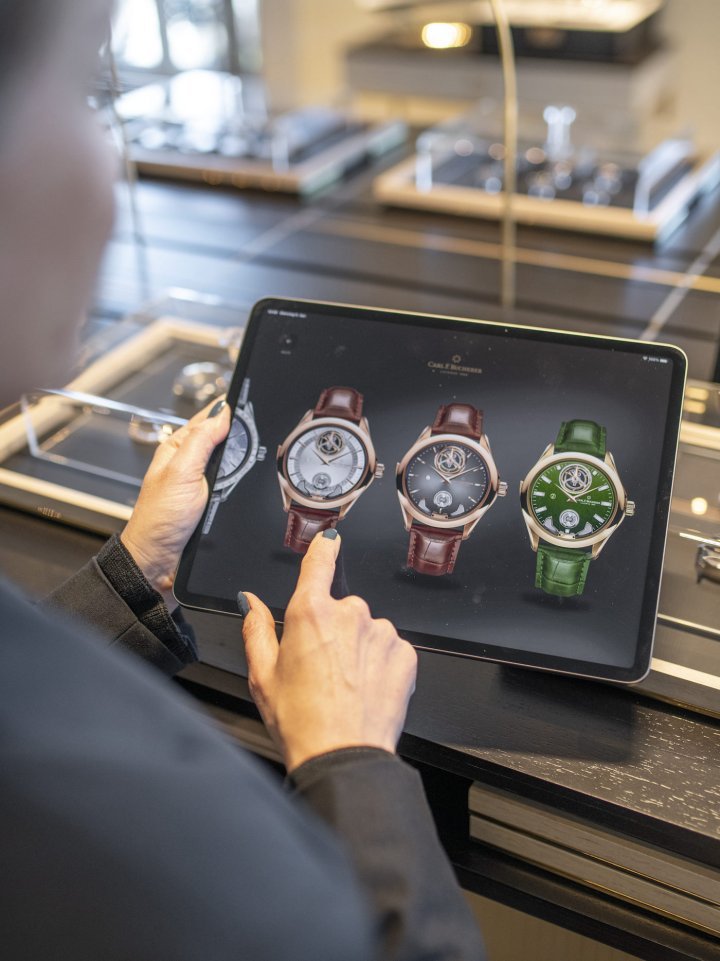 As part of its new CFB Mastery Lab concept, Carl F. Bucherer has developed an app that provides an entertaining and educational way to make modifications to some of the brand’s flagship models.

To this end, a new business unit has been set up to focus exclusively on this concept of individualisation. The first real test took place at this year’s Watches and Wonders: a small circle of longstanding customers and retailers were given access to an app that provides an entertaining and educational way of making a wide range of modifications to some of the brand’s flagship models. Carl F. Bucherer representatives then embarked upon a world tour of their retail network to field-test the idea.

The result: “Our investment in a digital app combined with the global roadshow provided proof of our individualisation concept,” stresses Uwe Liebminger. “This project makes it possible to ‘emotionalise’ products such as our peripheral technology and to have an in-depth conversation with enthusiasts. Our only criterion when developing individual timepieces is our customers’ wishes.”

“Customisation is based on suggestions from the brand, which offer a predefined number of modifications. We want to impose as few limits as possible on customers.”

Establishing the right network of artisans

While Carl F. Bucherer is not the first brand to choose the path of bespoke watchmaking, and nor will it be the last, Uwe Liebminger explains that this decision represents “the culmination of the entire process leading to our technological and strategic independence as a manufacture”. Whether through this policy of ‘individualisation’ or through the decision to concentrate on Haute Horlogerie, the number of in-house movements as a proportion of the brand’s overall production is destined to grow.

Samir Merdanovic, Chief Technology Officer at Carl F. Bucherer, is enthusiastic about this development: “You will see more and more new pieces using our in-house movements and peripheral technology. And for someone like me, it’s very exciting to create timepieces with the customer. In a way, each new individual piece is also a new reference.” 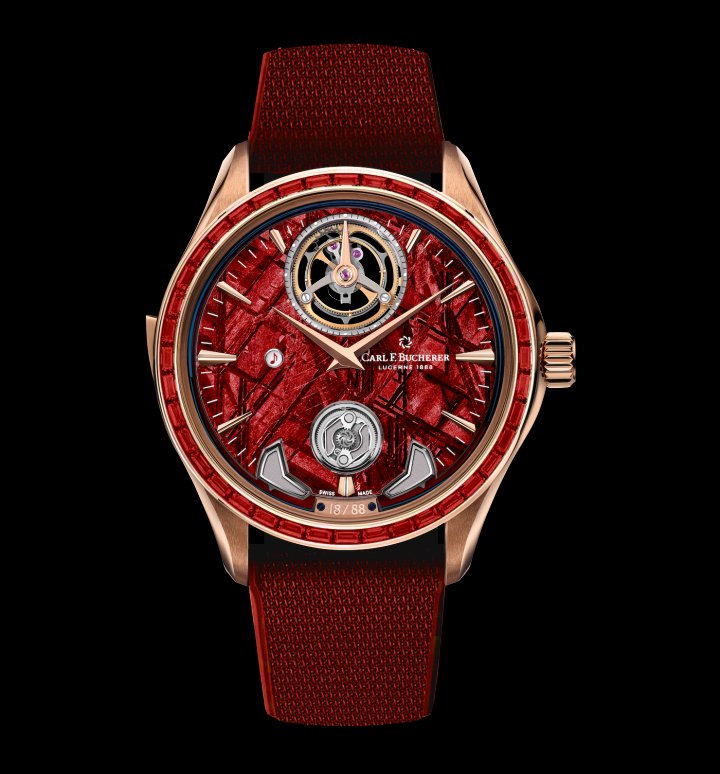 Variations will be possible on the Manero Minute Repeater Symphony, the most complicated timepiece Carl F. Bucherer has ever created. Not only does it have a peripheral winding system and a peripherally suspended floating tourbillon, it also features a minute repeater with a peripherally mounted regulator.

In concrete terms, how will this creative process unfold? “It starts with our global sales teams engaging in a dialogue with their local customer base to help collectors imagine what their future watch might look like,” says Samir Merdanovic. “In this respect, the app helps. This process will result in a brand new watch and ultimately in an individual one-of-a-kind masterpiece.” It’s worth noting that the app will be used exclusively within the CFB Mastery Lab and will not be released to the public.

To succeed in this new venture of individualisation, Carl F. Bucherer has to find the right partners and craftsmen to work with: artisans who are able to meet very specific demands. One example is the crafting of the dial: “Although we have produced a few individualised pieces on request in the past, we have extended our network of suppliers in order to deliver dials and other components with unique decorations,” continues the CTO. “For pieces that might cost half a million francs, this is entirely to be expected.” 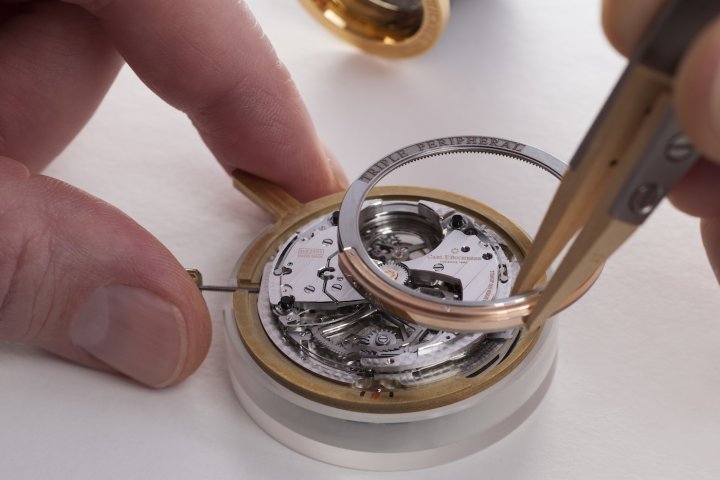 Customers will have a wide array of options for creating their own individual timepiece. They will be accompanied on their creative journey by Carl F. Bucherer staff.

Not only will there be a dedicated ‘individualisation unit’ at the manufacture in Lengnau, there will also be a dedicated project team, including watchmakers, designers and other experts, on hand to translate customers’ dreams of a one-of-a-kind timepiece into reality. There’s one limitation, however: the individualisation work will focus on the movement finishes, rather than on changes to the calibre itself. “We are not ruling out incorporating some additional functions, but we’d have to discuss them in depth with the client. For example, changing the location of the tourbillon on a model is far from easy. And there is already a lot to explore!”

“This project makes it possible to ‘emotionalise’ products such as our peripheral technology and to have an in-depth conversation with enthusiasts.” 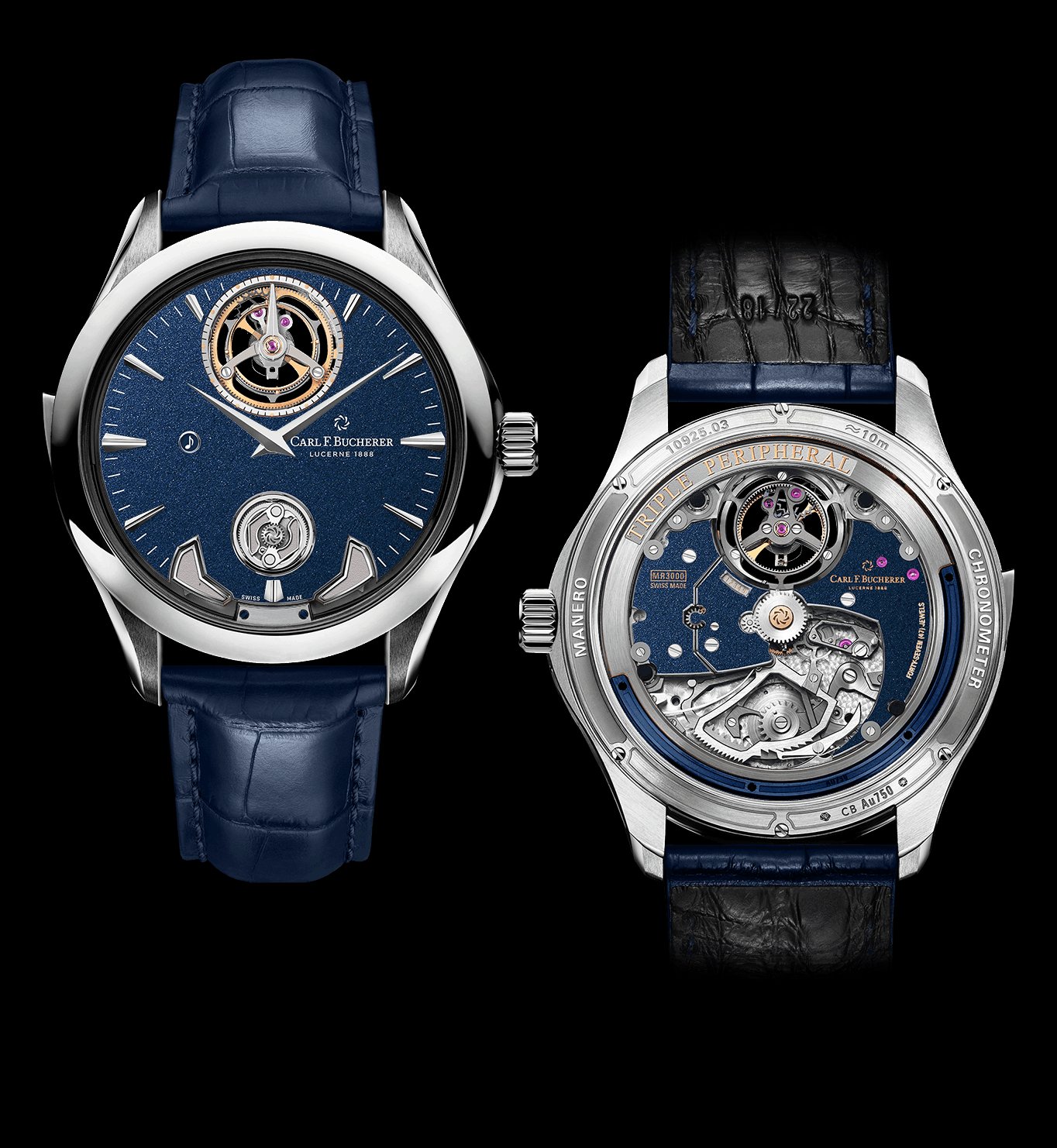 Offering customers what they truly desire

Uwe Liebminger notes that a significant number of new clients begin their Haute Horlogerie journey with the tourbillon or the minute repeater, two complications already mastered by Carl F. Bucherer, with the added feature of the peripheral technology dear to the Lucerne brand. He mentions another argument in favour of this new unit’s success: as an independent brand still managed by the founding family, Carl F. Bucherer is set up for flexibility and rapid reaction.

In any case, individualisation will not be offered in hundreds of sales outlets, but will be entrusted to salespeople and brand representatives who have a privileged link with a clientele of connoisseurs. Visibility will be reinforced by highlighting the possibility at roadshows and trade fairs. 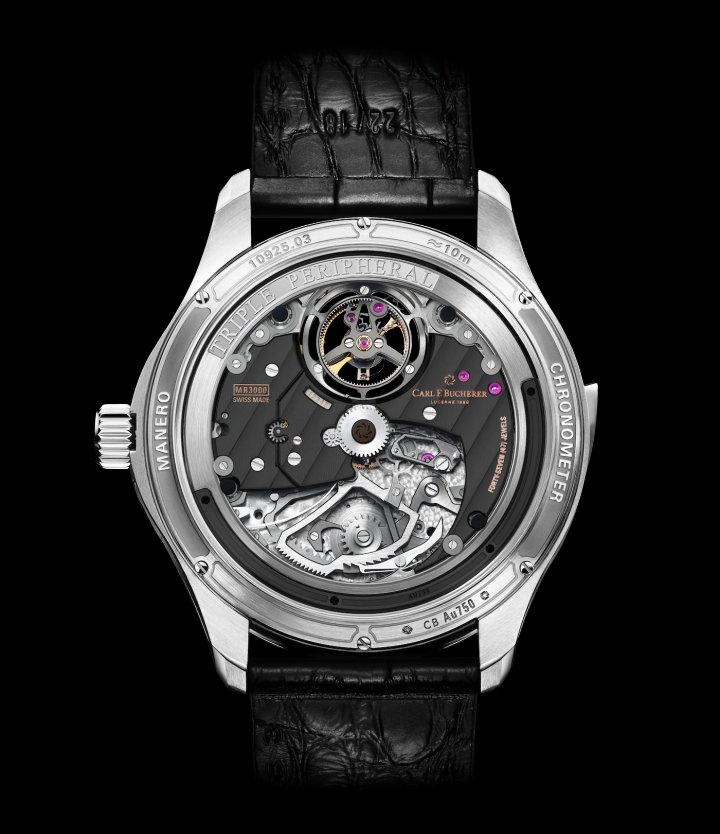 “Many Haute Horlogerie customers are looking to customise their watches, which is a complex process,” notes Samir Merdanovic. “We’ve made the process easier while at the same time providing a complete VIP experience. In other industries such as the automotive sector, these types of projects are already much more common. We have already built much deeper relationships with customers who have ordered special masterpieces from us. Many of them travel to the manufacture to pick up their watch, and even want to take the watchmaker’s tools back with them, so strong is their emotional attachment to the timepiece!”

Uwe Liebminger concludes: “For us, the CFB Mastery Lab is an original way to engage with a clientele looking for very unique and individual timepieces, while moving the brand upmarket. This development also allows us to be more creative, to grow closer to our end customers and to be in tune with trends and collectors’ tastes. At the end of the day, in the age of remote working, there is nothing more rewarding than coming face to face with your customer, and making real eye contact!” 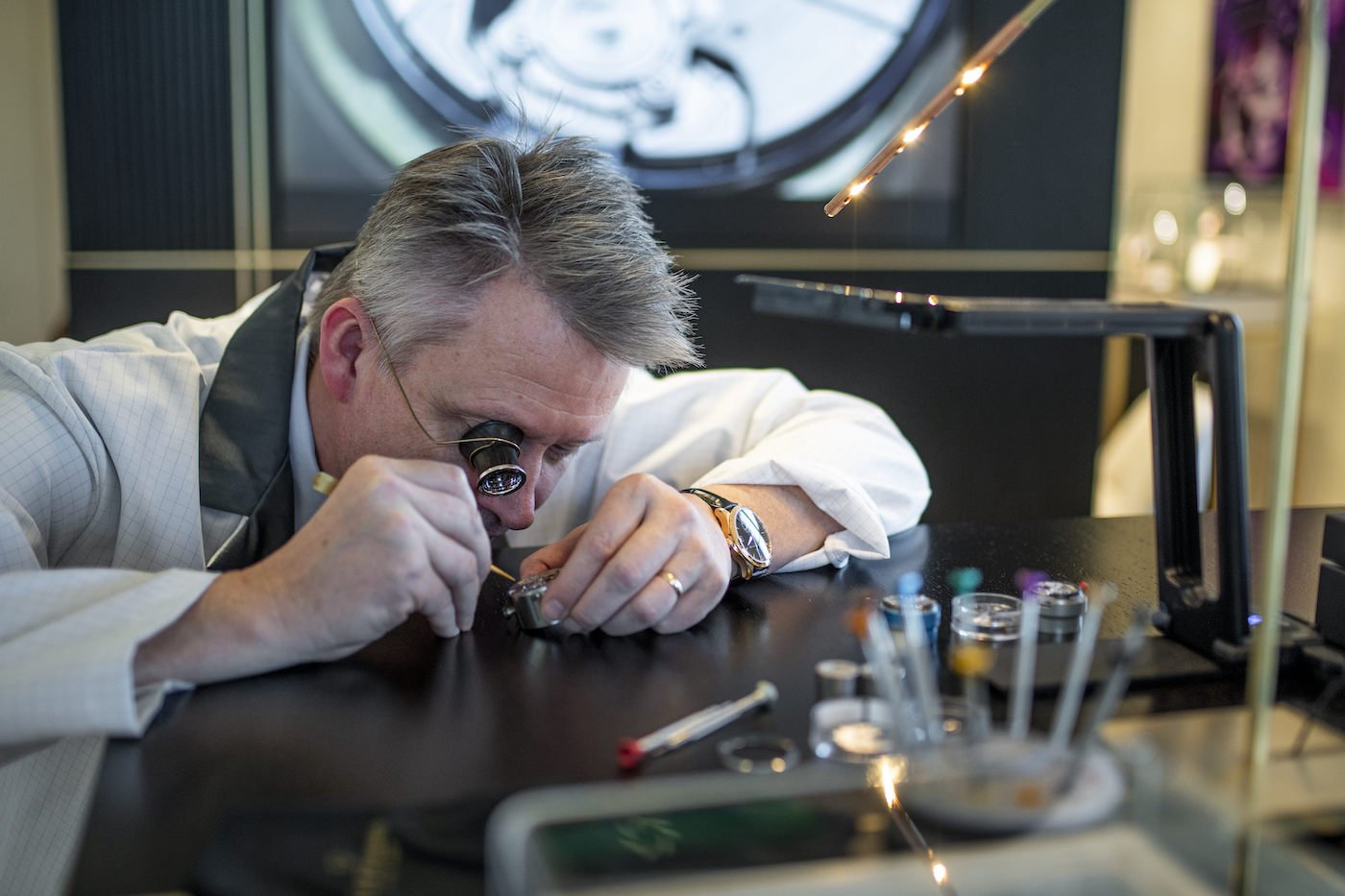