What’s in a nameı How many times have you heard that oft coined phrase that implies it is not the name of something that is important, but its quality and character.
In Romeo and Juliet, William Shakespeare had Juliet saying:
‘What’s in a nameı That which we call a rose
By any other name would smell as sweet.’
But it was Jack Heuer who cornered the horological market by not only creating a timepiece that incorporated both quality and character, but also by bestowing upon it a name that became a legend in its own right: the Carrera!

Jack Heuer, Juan-Manuel Fangio and The Ferrari drivers of the 70s Niki Lauda and Clay Regazzoni
in the Heuer offices with Jack Heuer.


In the beginning …
The Heuer family first appears in Swiss records in the XIII century in the Seeland area and by 1376 it could be found in documents in Nidau, near Bienne. Edouard, the founder of the Heuer company, settled in St. Imier in 1854 at the age of fourteen to learn the art of watchmaking. Within a few short years he had worked his way up the ladder to become a quality controller in one of the local companies.
Ambitious, dynamic, intelligent and very much aware of the changing face of the industry, Edouard Heuer founded his own company in 1860 at the age of only 20 !
Almost a century later, Jack Heuer, the great grandson of the founder, studied engineering and, as he explains, “I didn’t feel like joining the company. But one day, my father said to me, ‘Son, I’m sixty-five years old and I think that you should come into the company for a year.’ That’s how I began. When I was twenty-six, I was sent to New York to open a subsidiary there and I stayed for four years. Then my father, Charles-Edouard and my uncle, Hubert, who each owned 50 per cent of Heuer, asked me to come back and take over the running of the company, but I said that I’m not staying if I don’t have the majority.”
The rest, as they say, is history.

The origin of the species
I met Jack Heuer in the new TAG Heuer workshops in La Chaux-de-Fonds. Elegantly dressed, convivial, charming and a gentleman in the true sense of the word, he is now in his early seventies but belies his age. As we were chaperoned around, he had an almost child-like enthusiasm as we observed the meticulous work of the watchmakers and the numerous precision-oriented controls to which a TAG Heuer watch is now subjected. At the section where the new Carrera Tachymeter was being assembled, I couldn’t help wondering what his thoughts were as he saw the dawning of another new model of a watch he had created some forty years ago.
Today, Jack Heuer is Honorary Chairman of TAG Heuer Group, which he characteristically understates as “… a sort of ambassador function.” Adding, en passant and with a smile, “TAG Heuer ask me what I think of watches or ideas. I give them feedback and they listen. I especially keep an eye on the dials …”
If the truth be known, Jack Heuer wears three hats: he has an advisory role with the Executive Committee of the TAG Heuer Group, travels around the world to special events as an
ambassador-cum-spokesman talking about the brand’s heritage and innovations and, perhaps most importantly, participates in the product development sessions headed up by Jean-Christophe Babin, the CEO and Stephane Linder, the Director of Product Development.
In fact, at one point during our visit, Jack looked at his wrist to check the time and realized he was still wearing a prototype of a “secret” new model he’d put on to get the feel of it. Apologizing, he rushed off to return the watch explaining that he couldn’t talk about it since it was still under wraps.
Having completed the visit of the workshops, we were ushered into a private room for lunch and to discuss the whys and wherefores of what makes TAG Heuer tick.
I’ll gloss over the past history of Heuer and its change to TAG Heuer, suffice it to say that Heuer became a public company in 1969 and by 1982 when Piaget-Leonidas became a majority shareholder and privatized the company again, Jack Heuer “… wanted nothing more to do with the brand!” In 1985 the TAG Group took over the company and renamed it TAG Heuer. Today’s owners are LVMH Moët Hennessy-Louis Vuitton.

Back to his first love
Having moved from watchmaking to the electronics industry and replenished a little of his lost fortune, Jack Heuer was at last sitting back and taking things easy when Jean-Christophe Babin, the then new CEO of TAG Heuer, asked him out to lunch and suggested that he came back into the company.
“I joined Jean-Christophe Babin at a country managers’ meeting a little later and everyone was so warm and affectionate that I decided that I wanted to be a part of TAG Heuer again. But it was mainly Jean-Christophe who convinced me to return because I saw in him a real TAG Heuer person. He is not only dynamic and progressive, but he actually pursues the sports with which the brand has always been associated – automotive sports, skiing, sailing.
“ Today I have no stress. I can more or less decide what I want to do. Basically, I am an idea and marketing man but I can be effective because I give an unbiased feedback to Jean-Christophe. However, I have to admit that I enjoy the late recognition of something I did years ago. The Carrera is a good watch with a good design and it’s still valid today. But it’s a better watch now than it was. The overall quality and finish is far superior today and the movement is much better. The quality control here at TAG Heuer is impressive, it’s far more stringent and precise than in my day, consequently there is a low return rate that it is a recognized feature within the trade.
“It was much different in the old days. The watches were ugly but functional before World War II and after the war it wasn’t easy making chronographs in Switzerland because they continued in the same style. Watchmakers needed to get their act together and it wasn’t until modern design in general began in the late 50s and 60s that things began to change here.
“I was a fan of modern design and that was behind my thinking of the Carrera – in fact, function and design were the guiding force when I created it. By the early 60s, watchmaking had improved although it was still artisanal, but we had the tachometer on the dial and 1/5ths of a second, minute and hours counters or even three counters on the dial. And so Carrera became a success.” 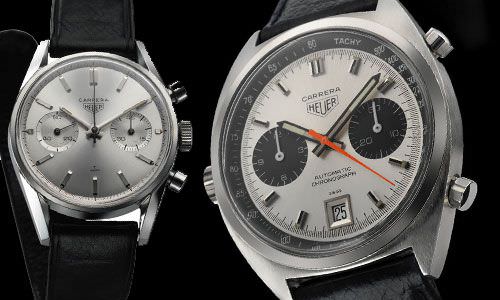 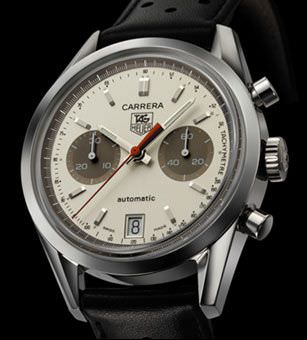 
The Carrera
The Carrera began its long history in the pits and paddocks of the Twelve Hours of Sebrina race in 1962 when Jack Heuer met the 12 and 14 year old Rodriguez brothers, who vividly and colourfully explained the risks and glory of the last Carrera Panamericana Mexico Road Race. As Jack Heuer explains, “The Carrera name had a good ring to it. It’s dynamic, elegant, easy to pronounce and is charged with emotion. And as we gave watch collections a name at Heuer, Carrera was the obvious candidate for the future chronograph.”
Work began on the watch in 1963 and was introduced to the trade in mid-1964. The chronograph had round push-buttons, long, slender attachments and offered optimal readability with no divisions on the dial, since the 1/5th graduation had been imprinted on the slanted bezel that held the crystal. The tachometer, pulsimeter and the decimal scale appeared on the dial with the version that appeared a year later. The chronograph movement used was a Valjoux 92 Calibre and for the three-counter version it was equipped with the Valjoux 72 movement. In 1966, a new edition of the first Carrera was launched as a replica that retained the original 37 mm diameter, but this time with the Lemania 1873 mechanical movement and in 1999, with the participation of Jack Heuer, a slightly larger model appeared (39 mm). Apart from the size, the now self-winding movement and the fact that a sapphire crystal was used that increased its water-resistance from 30 to 50 metres, hardly anything had changed.
The Carrera has hardly been out of the watchmaking headlines since its inception, whether it was because of a new model or its association with so many famous racing drivers – Juan-Manuel Fangio, the Ferrari drivers of the 70s - Clay Regazzoni, Jacky Ickx and Niki Lauda - and the young French driver Sébastien Bourdais, the 2004 ChampCar World Series Champion.
“The specifications remained faithful to the brand’s spirit,” Jack Heuer confirms. “When you create a new product, the challenge is to communicate an emotion, to transcend modernity without sacrificing elegance.” 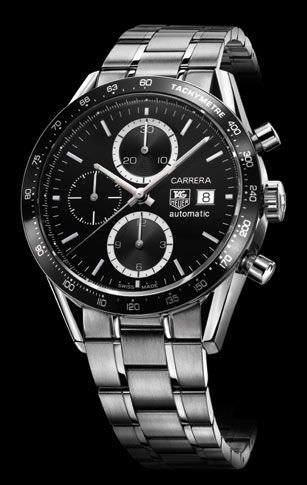 
The latest Carrera models
This year, TAG Heuer has introduced two new Carrera models. The first, the Carrera Chronograph, appeared at BaselWorld and was produced in a Limited Edition of 1964 models to correspond to the year of its creation. In stainless steel equipped with a mechanical automatic self-winding chronograph movement (ETA 2894 base), it has a permanent motion second hand at 3 o’clock, a 30-minute counter at 9 o’clock, date at 6 o’clock and a specific tachometer scale for the calculation of speeds up to 200 units (km or mph). Water-resistant to 50 metres, the screw-down caseback is engraved with ‘Carrera 1964 – 2004, 40 years of legend, the signature of Jack Heuer and the Limited Edition number.
The second model, the Carrera Chronograph with Tachymeter, was launched in September. In stainless steel and equipped with the TAG Heuer Calibre 16 movement, this new model is 41 mm and has a black dial with a silver ring around the counters. There are three counters, hours at 6 o’clock, seconds at 9 o’clock and minutes at 12 o’clock, a date aperture at 3 o’clock and there is a sapphire crystal caseback. The hands and markers are luminescent, there are diamond-shaped hands and the watch is water-resistant to 50 metres.
The emergence of these new models clearly demonstrates that the Carrera continues to have a long life before it and will continue to be a coveted timepiece in the world of watch aficionados. As Jean-Christophe Babin, the CEO of TAG Heuer says, “Jack Heuer has brought his experience to bear on these new Carreras, which boast all the qualities of contemporary high-end timepieces, whilst losing nothing of the watch’s original spirit.”
In his totally unassuming manner, Jack Heuer, the man behind the legend, simply added, “Carrera means both race and career and when I think that this watch is the centre of attention after forty years, I think to myself that it’s made a really good career for itself. Also I have to admit that I’m proud to see the name is still alive … I’m also flattered.”
Finally, to answer the question, ‘What’s in a nameı’, as far as TAG Heuer’s Carrera is concerned, there’s quality, character, the indomitable spirit of Jack Heuer and the brand’s superb attention to the ‘art of details’!