Founded in 1860, TAG Heuer has remained ever since at the forefront of precision timing. In the last four years however, the brand has broadened its horological profile both technically, stylistically and promotionally with its recent Sport & Glamour concept.

Founded in 1860, TAG Heuer has remained ever since at the forefront of precision timing. In the last four years however, the brand has broadened its horological profile both technically, stylistically and promotionally with its recent Sport & Glamour concept.

TAG Heuer is the world leader in the prestige sports watch and chronograph categories. From the brand’s beginnings sport has been a part of its DNA, in fact it is true to say that its very raison d’être is the world of sport. In 1916 it launched the first stopwatch accurate to 1/100th of a second, in 1969 came the world’s first self-winding chronograph movement, in 2004 we saw the remarkable Monaco V4 Concept Watch, an avant-garde timepiece driven by micro-dented belts instead of the usual wheels and pinions. This year we were introduced to the captivating Calibre 360 Concept Chronograph, the world’s first mechanical wrist chronograph with an unprecedented 360,000 vibrations per hour (vph) – ten times faster than any other chronograph - that measures precisely and displays 1/100th of a second.

The Calibre 360 Concept Chronograph
The Calibre 360 Concept Chronograph, the first 1/100th of a second mechanical wrist chronograph, is the culmination of TAG Heuer’s know-how and expertise in the field of precision mechanical watchmaking and sports timekeeping. Years of painstaking research and experimentation have been involved and every mechanical obstacle has been eliminated through a groundbreaking manufacturing concept and a world first in watchmaking.
TAG Heuer has developed a unique and complex movement, the principle of which was set by the Chronomatic Calibre 11 in 1969. Made from more than 234 components and mechanisms of which 131 are directly from the chronograph movement, it actually fuses two distinctive mechanical movements, each connected to the other but operating independently.
To achieve this exceptional level of precision, adjustment and operational independence, the basis of the Calibre 360 is a TAG Heuer Calibre 7 automatic movement that has a 42-hour power-reserve, 28,800 vph with Côtes de Genève decoration on the oscillating mass. It is also a certified COSC chronometer. 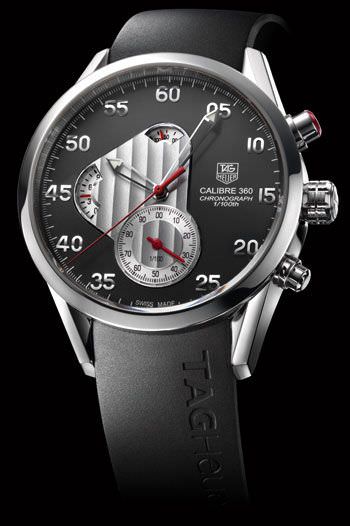 
However, the Calibre 360 movement is unique in that the chronograph function is not just a module added to the automatic watch movement. With its barrel, separate manual winding system, gearwheel and an independent balance wheel and spiral mechanism, it is a genuine and wholly separate movement, a chronograph with a power-reserve counter and a quick-rotating barrel that offers 100 minutes of power reserve, plus a remarkable Swiss lever escapement and special balance wheel. The high-precision mechanism provides an unbelievable oscillating frequency of 360,000 vibrations per hour, thus creating a new milestone in Swiss watchmaking history. The quantum leap to 360,000 vph from the usual 28,800 or 36,000, is like comparing a Formula 1 engine jumping from 18,000 to 180,000 rpm.


Being a world first, TAG Heuer has filed for two exclusive worldwide patents for the Calibre 360: the first to protect the 1/100th of a second counter on a mechanical wrist chronograph; the second to protect the unique crown control system. The single crown winds both movements and sets the time. A clockwise rotation loads the barrel on the manual chronograph movement and a counter-clockwise rotation rewinds the automatic movement for the time.
The movement is housed in an ultra-resistant and light titanium Ti5 case that can be highly polished, an exclusive TAG Heuer material developed with McLaren in 1997 for the brand’s Kirium series of watches. With a highly original architecture, the chronograph functions are displayed through the ‘Chronograph Engine’ which contrasts with the mat black dial. At 6 o'clock, an oversized circular fine-brushed counter keeps track of the 1/100ths-of-a-second red hand, while at 9 o'clock, a red minute hand directly integrated into the ‘Chronograph Engine’ displays the elapsed time on a 9-minute scale disc, adapted specifically for the car-race timekeeping. The 100-minute power-reserve indicator is at 12 o'clock and is displayed in the same manner as the fuel indicator of a car through the angled polished opening of the ‘Chronograph Engine’.
There is an oversized crown and two asymmetrical pushbuttons, the larger of which, at two o’clock and capped bright red, controls the stopwatch function. Once pressed, the chronograph mechanism springs into action, simultaneously activating the chronograph second hand in the centre of the dial and the 100ths-of-a-second hand located in a counter at six o’clock. Thanks to the high oscillating frequency, the centre hand advances at a perfectly regular pace, and the 100ths counter makes a complete rotation in one second. The caseback houses two semicircular sapphire crystal windows offering another perspective of this extraordinary TAG Heuer movement.
The bracelet, developed with Juan Pablo Montoya, Formula 1 driver, watch aficionado and one of TAG Heuer’s ‘ambassadors’, is in black rubber with a folding buckle that enhances the comfort and ergonomics of the watch, even when driving at 300 km/h. Montoya, who was also involved in the concept of the Calibre 360 Concept Chronograph, has tested this Formula 1-inspired revolutionary timepiece on the racetrack.

Product innovation
Over the last three years, TAG Heuer has redesigned and re-engineered all of its historical watch icons in order to create an exciting range of timepieces. At the same time it has lost no time in continuing its innovative foray into both mechanical and quartz timekeeping.
In the digital/quartz field we have seen the introduction of the remarkable Microtimer (see Europa Star 3/2003), the first-ever wrist chronograph measuring and displaying 1/1000th of a second that also included a 99 lap-by-lap timing memory and best lap automatic recalculation, a perpetual calendar, dual time and countdown functions.
In the domain of mechanical movements, we were offered the TAG Heuer SLR Chronograph, an exclusive mechanical chronograph developed with Mercedes and reserved exclusively for owners of the Mercedes-McLaren Sports car. Then came the revolutionary Monaco V4 Concept Watch (see Europa Star 3/2004) which is considered to be one of the most surprising watch-making advances in recent history. It is equipped with a mechanical movement with a belt-driven transmission encased upside down in a classic square Monaco case. The name V4 derives from the movement’s four barrels, mounted in a V-shape like the cylinders in a supercharged motor-racing engine.


The New Aquaracer Calibre S
As recently as the end of May this year, at the same time as announcing that TAG Heuer will be the partner of the Team China Challenge for the America’s Cup in 2007, the brand launched its New Aquaracer Series, with the New Aquaracer Calibre S as its flagship model. An elegant, high-performance chronograph that displays Time, Chronograph elapsed time and a Regatta Countdown function all using the three central hands (hour, minutes, seconds) and two patented counters with bi-directional hands positioned at 5 and 7 o’clock.
The 3 central hands are used to display either the elapsed hours/minutes/seconds in the Chronograph mode, or the hours/minutes/seconds in the Time mode or, turning anti-clockwise, the remaining minutes/seconds in the Regatta countdown mode, making the watch extremely comprehensible. The right semi-circular counter with bidirectional hand displays the tenth of a second in the Chronograph mode. If the Time mode is in use, the date is displayed using both the left and right bidirectional hands of the semi-circular counters: the left counter indicates the tens and the right the units. 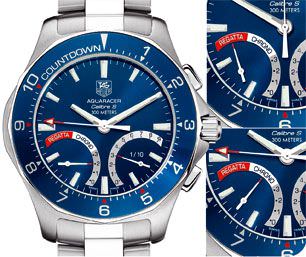 
To switch from standard Time mode to Chronograph mode or to Regatta countdown mode, the crown is pressed, once to access the Chronograph mode and twice to access the Regatta countdown mode. The small hand of the semi-circular left counter changes to indicate the Mode, and all the central hands are automatically set to the appropriate starting position.
For the Regatta Countdown mode, by pressing the crown of the Calibre S twice, the central minute hands go to a 10 minute-countdown (any minute countdown can be set) as indicated on the aluminium bezel. The second hand is set to 0. The left semi-circular counter hand indicates ‘Regatta’. By pressing the pushbutton at 2 o’clock the 10-minute countdown begins and the second and minute hands turn anti-clockwise from the 10-minute position. When the countdown is completed, the minute and second hands having turned anticlockwise reach zero and the watch automatically switches to the chronograph function and runs from zero in the standard clockwise manner. At this point, the left counter hand indicates ‘Chrono’.
The New Aquaracer Calibre S (41 mm) is the superlative aquatic sports chronograph. Exclusively developed and patented by TAG Heuer engineers, it has all the attributes of a competitive yachting timepiece, including the technical characteristics that represent the essence of TAG Heuer's long-term commitment to aquatic sports. The watch has either a blue or anthracite dial with sunray decoration, is water-resistant to 300 metres, has a perpetual calendar, 1/10th of a second precision, a fixed aluminium bezel with countdown scale, a scratch-resistant sapphire crystal, luminescent hands and markers, hand-applied indexes and semi-circular counters. The 3-row steel bracelet, alternately polished and fine-brushed, has a double safety clasp and bracelet extension.

The fusion of Sport & Glamour
The contribution of the TAG Heuer brand ‘ambassadors’ to product development is of fundamental importance to the brand. From the very first so called ‘ambassador’ in 1969, Jo Siffert, the F1 driver who suggested placing the crown on the iconic Monaco model at 9 o’clock rather than at 3 o’clock so that the watch would be more comfortable when racing, through to today when Tiger Woods was instrumental in the creation of the TAG Heuer Professional Golf Watch, ambassadors are implicitly involved in the products.

Another first: The Chinese authorities allow TAG Heuer to use The Great Wall of China for promotional purposes.


This fusion of Sport & Glamour is highlighted by the ‘What are you made ofı’ catchphrase that is used in the current highly successful communications advertising strategy. Patrick Demarchelier, the star fashion photographer has photographed the ambassadors wearing a TAG Heuer watch … and just look at who is involved in this TAG Heuer experience: film star Brad Pitt wears the Aquaracer Automatic; Juan Pablo Montoya the F1 Mercedes-McLaren driver wears the Link Tachymeter Automatic Chronograph; the golfer Tiger Woods wears the Professional Golf Watch that he helped to perfect; Uma Thurman, the actress is involved with the Link Chronograph Lady Diamonds; Maria Sharapova the tennis star showcases the new Formula 1 Diamonds ladies’ model and Kimi Räikkönen relaunched the men’s Formula 1 model last year. Other TAG Heuer Ambassadors are Yao Ming, Jeff Gordon, Ian Poulter, Sébastien Bourdais, Sushmita Sen, Ai Tominaga, Tanya Streeter, Shah Rukh Khan and many others.
“For TAG Heuer, 2005 is first and foremost the year we perfected the fusion between ‘Sport and Glamour,” Jean Christophe Babin, President and CEO of TAG Heuer eyplains. “These two qualities along with ‘Prestige and Performance’ have always been the key elements of our brand’s DNA. In 1969, Jack Heuer, our Honorary Chairman, launched the revolutionary Monaco Chronograph, a brand icon, based on his communication strategy of Sport and Glamour centring on Jo Siffert and the legendary actor Steve McQueen. Thirty-five years later the Monaco remains one of the brand’s most successful watches and with our dream team of ambassadors, TAG Heuer more than ever stands for Sports and Glamour and Prestige and Performance!”