The ‘first’ technical masterpiece to be created in Panerai’s manufacture in Neuchâtel, Switzerland

The ‘first’ technical masterpiece to be created in Panerai’s manufacture in Neuchâtel, Switzerland

The Panerai Calibre P.2002, the first movement to be created entirely within Panerai’s manufacture at Neuchâtel, is the fruit of Panerai’s creative and innovative skill and the technical expertise of Swiss master watchmakers: once again the Panerai tradition is perpetuated with the combination of Italian creativity and Swiss technical know-how. The power reserve, which enables the movement to run for 8 days without rewinding, recalls the Angelus movement of the 1940s. It has been interpreted in a new concept of power train consisting of three spring barrels and a distinctive power reserve indicator with linear representation. The system of setting the time uses the ‘zero reset’ device, which stops the balance and returns the seconds hand to zero when the winding crown is pulled out, enabling the watch to be set accurately and synchronized perfectly with the time source being used as a reference. The second time zone, another Panerai speciality, employs a method of display with two hands indicating the time on 12-hour and 24-hour dials (the centre hands obviously indicate the main time). 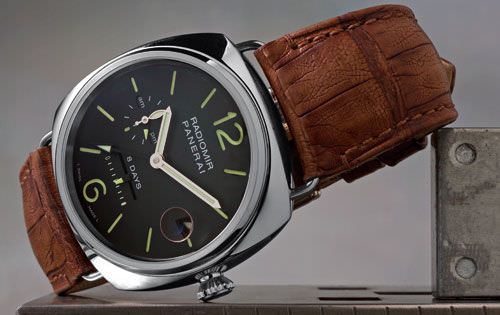 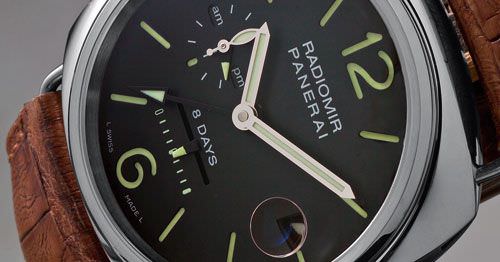 Technical features
The Panerai Calibre P.2002 has a hand-wound movement consisting of 245 parts (there are 21 jewels) with a free spring balance oscillating at the frequency of 28,800 vibrations/hour (4 Hertz). Respecting the constructional philosophy of Panerai, the large size of the case is matched by the dimensions of the movement, which has a diameter equivalent to 13 3/4 lines. (The Paris line is a unit of measurement still used in watchmaking today to indicate the size of the movement. A ligne corresponds to 2.255 mm, so the P.2002 is 31 mm in diameter.)
The black dial is the Panerai ‘sandwich’ type, consisting of two superimposed plates, the upper one perforated with the numerals and hour markers, while the lower one is covered with a layer of Super-LumiNova®, a luminous substance providing remarkable luminosity. As far as the information displayed is concerned, at 3 o’clock there is the small date window, with a magnifying lens obtained through the crystal thickness to facilitate reading the number corresponding to the day of the month, while at 6 o’clock a triangular indicator moves across a graduated sector to indicate the days of operation remaining without rewinding, according to the state of the springs contained in the barrels.
The Panerai watch which is using the Calibre P.2002 is produced with a platinum case in a series limited to 50 units and with a white gold case in a series limited to 200 units. The Radiomir 8 Days GMT is fitted with a hand-sewn alligator strap with personalized folding buckle.

The three spring barrels and the winding reserve indication
To ensure a very extended winding reserve, the Calibre P.2002 introduces an innovative system. The winding crown is simply unscrewed from the seating onto which it is screwed while the Radiomir 8 Days GMT is being worn, in order to carry out the hand-winding of the three spring barrels. These barrels are arranged in series, two of them mounted one above the other, whilst the gear train is mounted on the third spring barrel, a mechanical assembly consisting of 30 components (excluding those of the three barrels themselves), which enables the winding reserve to be indicated on the dial, by means of an indicator moving on a horizontal axis following a special track.

The GMT function
The GMT (Greenwich Mean Time) function is a speciality that, via a special hand, shows the time in the place of departure while the local time is displayed by the two main hands of the watch. The adjustment of the second time zone of the Radiomir 8 Days GMT is carried out by the winding crown, which can be set to three positions. Pulling it out and moving it to the intermediate position, the local time can be adjusted: the main hour hand (which is the larger one) advances in steps of precisely one hour following the movement of the crown as it is rotated; the date indication is automatically updated according to the local time. With the winding crown pulled out to the furthest point, the time of the watch is set, with the hands indicating local time advancing according to the usual 12-hour arrangement. These hands are accompanied by the movement of the central hour hand of the second time zone, shorter than the local time hour hand, thus indicating the difference between local time and the time in the place of departure. At 9 o’clock, sharing the small seconds dial, a further hand displays the information of the GMT over 24 hours, to avoid any possibility of mistakes in reading the hours before and after midday.

The ‘zero reset’ device
When setting the time on the Radiomir 8 Days GMT, an operation which is carried out by pulling out the winding crown completely (the furthest position), the seconds hand on the small subsidiary dial at 9 o’clock immediately moves to zero. In this way the time shown by the hour and minute hands can be set precisely: at the instant indicated by the time source used as a reference, the winding crown is simply pushed back in and immediately the hands of the hours, minutes and seconds will start again in perfect synchronization.
This is achieved by the ‘zero reset’ device, consisting of 15 parts which carry out a functional effect similar to that of zeroing the large hand of a chronograph. A small heart-shaped cam is fitted to the arbour of the seconds wheel of the Calibre P. 2002. When the winding crown is pulled out as far as possible, a lever moves the heart-shaped cam back to its resting position and thus returns the seconds hand to zero. At the same instant another lever halts the balance wheel, temporarily stopping its oscillation.

Dial: Black, with luminous numerals and markers, small seconds at 9 o’clock, date at 3 o’clock, second time zone indicated by the central hand and on the small 24-hour dial at 9 o’clock, power reserve at 6 o’clock.