Ideas come quickly at TAG Heuer. The transformation of these ideas into prototype concept watches and then a viable and commercially successful watch however, takes time. In short, in accordance with the age-old adage, ‘the impossible we do immediately, miracles take a little longer.’

Ideas come quickly at TAG Heuer. The transformation of these ideas into prototype concept watches and then a viable and commercially successful watch however, takes time. In short, in accordance with the age-old adage, ‘the impossible we do immediately, miracles take a little longer.’ 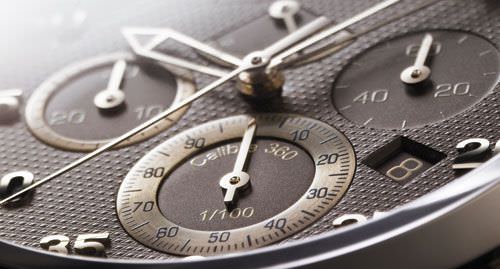 Since its founding in 1860, TAG Heuer has been at the forefront of horological development. The brand’s capacity to transform the seemingly impossible into reality is a part of its DNA. Already in 1887 the company patented the oscillating pinion, an essential component in mechanical chronographs and one that is still used in the brand’s Calibre 16 movement. In 1916 came the Micrograph stopwatch with 1/100th of a second accuracy; in 1969 there was the Chronomatic Calibre 11, the first automatic chronograph with a microrotor; more recently in 2002, the Microtimer was unveiled, the first Swiss wristwatch accurate to 1/1000th of a second.
TAG Heuer specialized in sports watches and it now has a genuine heritage of creative timekeeping in that domain. Today, it is the only watch company capable of offering an inimitable range of chronographs: 1/10th, 1/100th and 1/1000th of a second simultaneously in wristwatches, not to mention such specialized gems as the Professional Golf Watch and the sparkling Diamond Fiction Ladies’ Watch.

Concept Watches
As the keeper of the sports watch flame, TAG Heuer is in a state of constant research that nowadays translates into what they term as the Concept Watch. I recently asked Stéphane Linder, TAG Heuer’s Product Director, his definition of a ‘Concept Watch’: “Like a Concept Car, a Concept Watch is a prototype presenting its principal techniques and/or innovative designs.”
Under this umbrella, TAG Heuer launched its award winning Microtimer Concept Watch at BaselWorld in 2002. A sports chronograph accurate to 1/1000th of a second, it is a four push-button timepiece offering lap-time memory, best lap calculation, a traditional chronograph, a second time zone, perpetual calendar and a stand-by function that cuts off the display to an elegant black screen. A year later, the Microtimer was successfully launched commercially.
At BaselWorld 2003, TAG Heuer unveiled the Monaco Sixty Nine Concept Watch, a remarkable creation that incorporates the Microtimer’s unrivalled accuracy with the iconic stature of the Monaco wristwatch series.
It is a reversible timepiece that combines mecha-nical and digital functions: it has the classic Monaco dial and hand-wound movement on one side and a high-tech digital quartz movement of the Microtimer on the reverse side,
thus making it the first mechanical watch with
a 1/1000th of a second chronograph. The Monaco Sixty Nine is now a standard in the TAG Heuer collection.

Monaco V4 Concept Watch
Then at BaselWorld 2004 came the revolution. An idea, a concept, a complete upheaval to the accepted norm in watchmaking culture: the Monaco V4 Concept Watch. The V4 movement replaces the pinions of the traditional movement with a series of toothed drive belts. The oscillating weight used tradit-ionally to wind an automatic watch has been replaced by a linear oscillating weight that moves along a track between the watch’s four spring barrels. The four barrels are aligned two-by-two and are linked by a V-shaped bridge (hence the name of the model) and angled at 15° with respect to the dial. A gear system engages a cog and then translates the linear movement into a rotating movement. For the rotating parts, ceramic roller bearings are used instead of the standard synthetic rubies.
Like all revolutionary ideas, the Monaco V4 was greeted with mixed emotions by traditionalists, nevertheless the TAG Heuer team has worked ceaselessly since its initial sensational presentation to find answers to the innumerable technical problems faced in turning such a revolutionary idea into a viable concern.
Stéphane Linder gave a recent update on the Monaco V4 Concept Watch. He admitted that one of the major problems was the production of the infinitely fine drive belts but that has now been resolved. Initially classified as a ‘defence secret’ by the French army whom TAG Heuer had approached for help, the belts are now produced by injection moulding – an extraordinary feat given that their thickness is 0.5 mm (a hair from the head measures around the 0.9 mm).
TAG Heuer has invested a very large amount of time and money in this quite incredible project. But in keeping with its established philosophy, the brand continued in the face of adversity and doubt until the solutions to the technical problems had been resolved. Assuming that all the remaining technical challenges such as reliability, belt series production will be solved without causing unexpected delays, the latest guestimate for the commercial launch of the Monaco V4 is towards 2008 and it will have a COSC qualified movement and a three-day power reserve. As Stéphane Linder underlines, “Our Concept Watches are all about building a brand image. It’s good for the brand and excellent for creativity!” 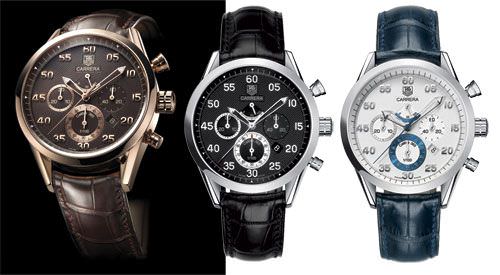 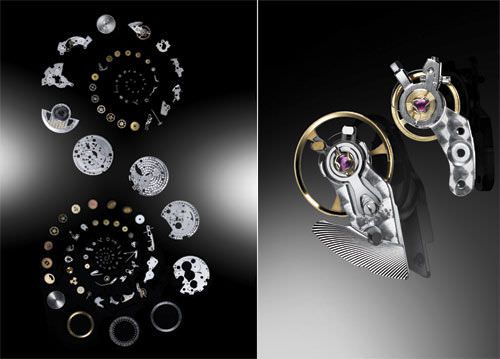 Strikingly handsome in rose gold with a ‘chocolate-brown’ dial, it is endowed with two sets of escapement mechanisms – effectively giving the timepiece two hearts or balance wheels: one balance wheel works at 28,800 oscillations an hour for normal timing and the other at 360,000 oscillations an hour when the chronograph mode is in use, that’s an amazing ten times faster than the most precise mechanical movements on today’s market.
The model has three exclusive worldwide patents: a) 1/100th of a second display on a mechanical wrist chronograph; b) a bi-directional crown and rewind system that controls the automatic watch and the mechanical chronograph in addition to setting the watch’s hour and date settings. Turned counter-clockwise, the crown rewinds the automatic watch and when turned clockwise it rewinds the manual chronograph; c) the transmission of the date from the base of the movement to the upper dial.
The other features on the Carrera Calibre 360 include a large Start/Stop pushbutton, an enhanced fluted crown, a 100-minute chronograph power reserve indicator at 12 o’clock, a 42-hour power reserve for the automatic section, an oversized 1/100th of a second counter at 6 o’clock, date aperture at 4 o’clock and a COSC certification for the automatic watch.
The Carrera Calibre 360 is also available in a White Gold Limited Edition of 100 pieces and a Steel Limited Edition of 360 pieces. 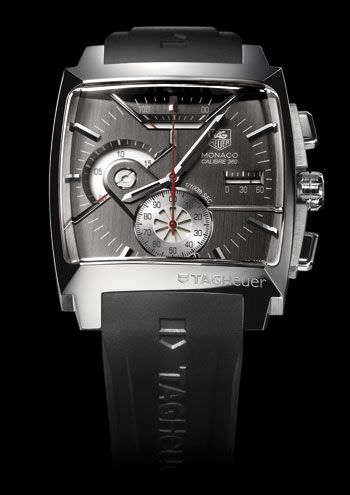 
Last, but far from least …
As has become the custom, TAG Heuer’s latest offering, the Monaco Calibre 360 LS Concept Chronograph, was introduced at this year’s BaselWorld. An evolution of the revolutionary 1/100th of a second chronograph technology, this model has a linear second counter with a completely new architecture that exposes the amazing horological technology within.
Inspired by the Monaco V4 design, the dial-less Monaco Calibre 360 LS uses meticulously hand-finished engine bridges to reveal its functions: an oversize 1/100th of a second chronograph counter exterior to the chronograph engine at 6 o’clock; a 15-minute chronograph counter embedded in the chronograph engine at 9 o’clock; a 100-minute power reserve indicator, also embedded, at 12 o’clock and an embedded linear 60-second indicator at 3 o’clock. The avant-garde and prestigious façade within the classic Monaco styling combines well with the contemporary polished steel case and the curved sapphire crystal. The two square sapphire ‘windows’ on the caseback offer a very different perspective on the Côte de Genève decorated Calibre 360 LS movement.
Prestige, precision and performance are all major factors in the TAG Heuer philosophy for creating avant-garde timepieces. To this one must also add perseverance, painstaking planning and prototypes for without these the other three factors would be meaningless.
TAG Heuer’s success, from its very beginnings through to today, underline its achievements in turning revolutionary ideas into the most accurate chronographs. The Monaco Calibre 360 LS Concept Chrono-graph is merely one more cog in the never-ending revolutionary research and development work the brand performs on a daily basis. The new chronograph’s appearance as a commercial product therefore, can only be but a short time away.

But then, what comes next? Rumour has it that … with TAG Heuer miracles do happen!