The return of a legend, the Chronometro Gondolo


The return of a legend, the Chronometro Gondolo

Eighty years ago, in 1927 (the time when, in all modesty, our own publication house was born), Patek Philippe delivered its last Chronometro Gondolo to Brazil. The name, destined to become a legend, designated the watches made by Patek Philippe especially for the Gondolo & Labouriau watch resellers and jewellers, located in Rio de Janeiro. Since the end of the 19th century, and during nearly 30 years, Patek Philippe created an exclusive collection for them, one that notably contained a number of wristwatches with different shaped cases: square, rectangular, tonneau, and cushion. The aura of the Geneva watchmaker was such that, in Brazil, the expression ‘Patek’ signified quite simply a ‘watch’, whether it was a Patek Philippe timepiece or not.
Within the Geneva Manufacture, the name Gondolo endured and, starting in 1993, it was given to the Gondolo Collection that comprised watches with different shapes revisited by Patek Philippe after delving into its very rich patrimony of timepieces. Many of these atypical watches, often inspired by the styles of the Art Déco period, required an exceptional savoir-faire, and provided the occasion to demonstrate the brand’s creative independence. To give a few examples, we might mention: the Reference 5099 or Cabriolet, a surprising watch with a cover that combines pink and white gold; the Gondolo Calendario, the first annual calendar in a tonneau shape; the intriguing Gondolo Trapeze; and the jewellery series incorporating the charming Gondolo Gemma and Gondolo Serrata in their very particular curved forms.
This large and original family is today becoming even larger with a new creation, the Gondolo Chronometro, inspired by its very highly styled and historic predecessor that was sold in Brazil.


A perfect tonneau
Among the classic forms in watchmaking, the so-called ‘tonneau’ shape is perhaps one of the most delicate and complicated to design and develop. Everything depends on the equilibrium of the lines and the degree of their curves, and of the proportions between height and width. Some ‘tonneau’ are heavy and bulky, while others are too elongated or too ‘bulbous’.
However, in Patek Philippe’s new piece, the equilibrium is interpreted in a particularly subtle manner. With a height of 42 mm, a width of 32 mm, a total thickness of 8.90 mm from crystal to crystal, and 11.45 mm from crystal to horns, the geometry works perfectly. These dimensions confer upon the Gondolo Chronometro a very special refinement, seen also in its slightly curved profile, which makes it comfortable to wear.
The same curved lines continue in the dial’s sapphire crystal as well as the crystal case back, which is no small feat considering the hardness of sapphire. The crystals alone required advanced technology to flawlessly integrate them into the case, not only because of aesthetic concerns, but also because the Gondolo Chronometro (water-resistant to 3 ATM) must satisfy the most severe criteria for protection. While the piece draws inspiration from the brand’s past, its movement is a small new ‘treasure’ from the present.


A shaped watch, a shaped movement
Since the 1930s and the launch of the Calibre 9-90, Patek Philippe has never since created a shaped movement that was ‘simple’, meaning one without any complications. This however changed with the design and creation of the Calibre 25-21 REC, a rectangular movement with manual winding.
Aligning with the exterior design, very ‘early century’ of the new Gondolo Chronometro, the architecture of this new mechanical movement follows very closely the aesthetic codes and technical specifications that prevailed at the time. From a design standpoint, this choice is notably expressed in the form of a curved ‘S’ of the bridge of the centre wheel and in the slender cut-outs of the bridges of the escape wheel and the seconds wheel, which offer a clear view of the beating heart of the movement, whose 142 component parts are housed in a space of 24.60 mm by 21.50 mm, with a thickness of 2.55 mm. The decoration is rigorously in line with classical watchmaking. The Côtes de Genève pattern is perfectly aligned vertically, and the optimal finishing touches of the parts include chamfering and polishing, all of which earns the timepiece the coveted Poinçon de Genève or Geneva Seal.
From a technical point of view, its ‘acclimation’ to the most modern standards of precision and working reliability involves the use of the elegant Gyromax balance (a Patek Philippe invention patented in 1951 that, thanks to its eight inertia-blocks split like collets, facilitates the balancing of the regulating organ, and allows the watch’s operation to be thus finely adjusted). Its frequency of 4 Hertz (28,800 vibrations per hour) guarantees optimal movement stability and precision. With manual winding, the Calibre 25-21 REC has a working reserve of 44 hours. 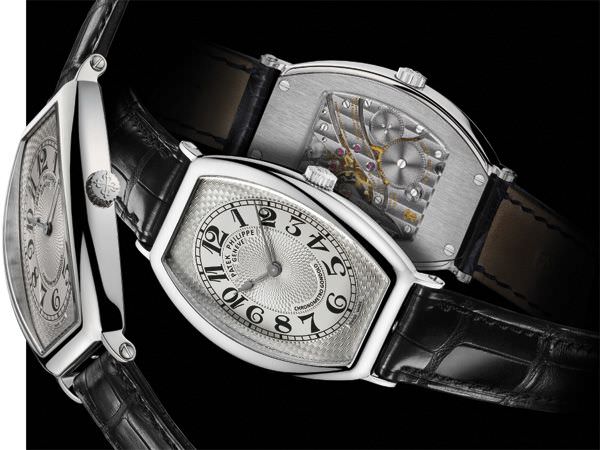 
The face of an angel
The face of the new Chronometro Gondolo is a faithful replica of the one dating back to 1925. In rhodium-plated gold, the dial, which seems to delicately retract from the side of the horns, has very fine hand-guilloché. As we know, the decorative technique of guillochage consists of a fine network of engraved lines that cross in a regular and symmetrical manner. Dating back to the 16th century, this technique nearly disappeared.
However, in drawing upon ancestral techniques for its new products, Patek Philippe is contributing to saving the art of guillochage. And with what results! We can admire the two zones of the dial with a delicate guilloché that creates the impression of a gradual opening. The zones are separated by an oval minutes circle with black lacquer Breguet numerals, highlighted by two arc-shaped cartouches bearing the signature of Patek Philippe and the name of Chronometro Gondolo.
The delicate dial is meticulously brought to life by two ‘Stuart Pear’ hands in oxidized black gold, and adorns the exclusively carved platinum case with its lovely silvery sheen. As are all current Patek Philippe platinum watches, a small diamond is set at 6 o’clock between the two horns of the bracelet. A system of screw-in bars allows the strap to be fixed to the case. Made of mat black alligator leather, with large scales, the strap comes with a platinum tongued buckle, also inspired from the historic model.
While the new Chronometro Gondolo is directly inspired from its ancestral model, we could not imagine however that Patek Philippe would want to re-visit the very ingenious sales methods used by its Brazilian distributors of the epoch - they ran a sort of posh lottery. The distributors created a Buyers’ Club, composed of a maximum of 180 members who loved fine timepieces. The watch’s purchase price, at that time, was 790 francs, and these aficionados would participate in a weekly lottery spread out over 79 weeks, paying each time 10 francs for the lottery ticket. At the first week’s drawing, the winner received the Gondolo Chronometro free. Then with each passing week, the new winner would have to pay sums that progressed from 10 to 780 francs. The 101 associates who remained, would pay each the full price, or 790 francs.
This method of sales by lottery was a huge success with businessmen in Brazil who found this mode of acquisition to be rather entertaining, and it let them circumvent the ban on gambling. It also allowed the Brazilian distributor to sell 180 Patek Philippe watches per Club in less than two years.
So, let’s bet that the Geneva brand will not renew this style of making sales. But then, there is no reason to, since there are so many of the brand’s fans who will want to acquire this very lovely and elegant timepiece.


Femininely cosmopolitan with the Calatrava Travel Time
For men, there already is a Patek Philippe watch that is both a great classic and comes with the additional and useful function of the Calatrava double time zone. Now, women can also enjoy these functions with the new ladies’ Calatrava Travel Time. This watch unites three of the grand traditions of the Geneva brand: formal classicism, symbolized by the Calatrava line; technical complexity, with a movement that simultaneously displays two time zones; and the art of jewellery. 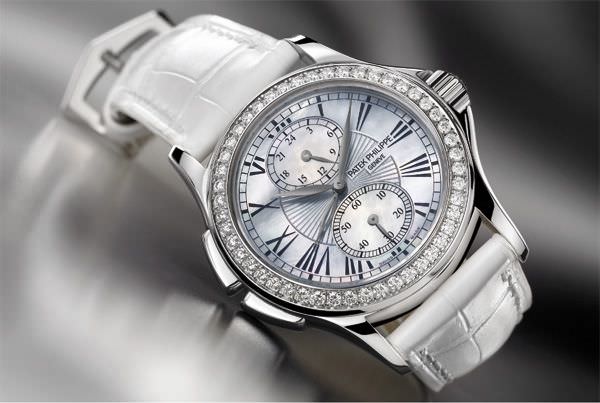 The sparkling and gloriously feminine appearance of the Calatrava Travel Time comes from: its round case in white or pink gold that takes the classic form of the Calatrava by integrating two rounded pushbuttons on the left side (they advance or retard the local time), which are two symmetrical echoes of the supports of the crown; its bezel, set with 48 Top Wesselton diamonds (1.02 carats); and the mother-of-pearl dials in blue-white for the white gold version, and brown and champagne for the pink gold model.
Below the surface of this Reference 4934, however, is a complex but functional mechanical heart, the manual-winding Calibre 215 PS FUS. Composed of 178 component parts, including a large Gyromax balance beating at the rate of 28,800 vibrations per hour, this calibre evokes all the signs of a Patek Philippe movement: chamfered bridges, hand-polished steel pinions, decorated plates and bridges. Requiring several months of meticulous handwork, this attention to detail has earned the watch the Poinçon de Genève or Geneva Seal.
But, it is also the ease of use and functionality of this Calatrava Travel Time that will delight the modern woman, who has become today a regular traveller in her own right. When she is in her home time zone, the two hands representing the home time and the local are superimposed. When travelling, all she needs to do is activate one of the two corrector pushbuttons to detach the hour hand for the local time zone and advance or retard it according to the time difference. And, the precision of the minutes and seconds is maintained, thanks to a mechanism that allows the separation of the watch’s gear trains.
Perfectly readable, the two hour hands of the Calatrava Travel Time are designed differently. A plain hand indicates local time while a skeleton hand shows the home time. And, to know if it is day or night ‘at home’, a small dial that is synchronized with the home time displays a 24-hour clock.
The Calatrava Travel Time is one ‘complication’ that simplifies, in a beautiful manner, the life of all world travellers.