Vacheron Constantin plays with a double patrimony, that of humanity, with its ‘Les Masques’, collection and that of its very own heritage, with its Patrimony collection.

Vacheron Constantin plays with a double patrimony, that of humanity, with its ‘Les Masques’, collection and that of its very own heritage, with its Patrimony collection.

One collection really created a lot of buzz at the SIHH this year, a collection unlike any other, extremely original, and of a rare beauty. It was the Métiers d'Art ‘Les Masques’ collection by Vacheron Constantin.
While looking at these pieces that combine art with the art of timekeeping and observing the detail and perfection of their craftsmanship, one cannot help but feel a certain ‘emotion’. Although the word is often overused, it really does have meaning in this case.
This emotion we feel has undoubtedly something to do with the mystery, the magic, and the sacred that emanates from masks coming from China, Alaska, the Congo, and Indonesia. But these feelings would never have been invoked if the miniature reproduction of these masks had not been done with such care and mastery, or if their placement into the watch had not been so skilfully designed and realized. 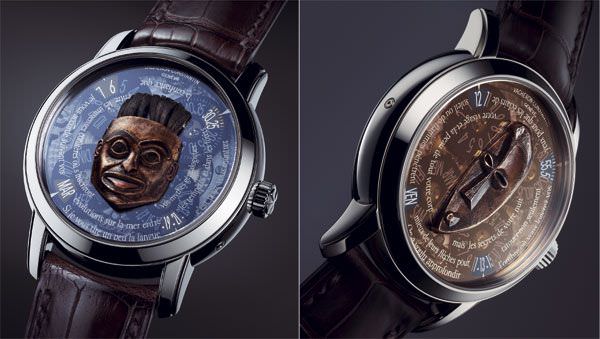 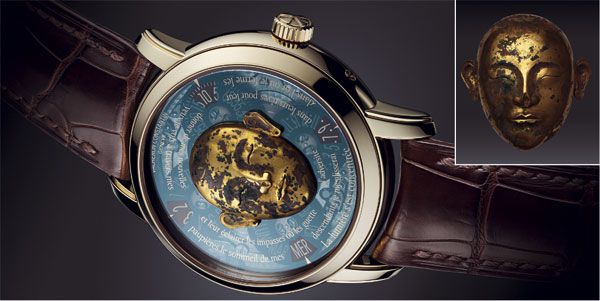 The fruits of time
The first question that comes to mind when seeing these creations is: why combine so-called primitive art masks with watchmaking? Contrary to Occidental works of art, which, since the Renaissance at least, have been signed and exhibited as pieces of art, masks have a function and a value that go beyond simple aesthetic considerations. They have a use; they are endowed with powers; they are associated with various rites; and they have a social and religious function. The fruits of anonymous artists, born from a collective talent, they are passed from hand to hand; they are worn; they participate in ceremonies and have a chronological dimension. Masks are the fruits of time that has given them a certain patina, transformed them imperceptibly, stamped them, hollowed out or softened their contours.
If watchmaking does not possess the same symbolic, religious, or magical significance as the masks (interestingly, however, the appreciation of modern society for mechanical watchmaking has perhaps a symbolic connection with the flight of time and the mastery over it…), it is similarly representative of the art of time, and just like the masks, its aesthetic value cannot be detached from its usage. Moreover, a watch is also the product of a ‘collectivity’, the fruit of the work of an artist, who remains, most of the time, anonymous.
But where did the idea originate to combine these two art forms? The city of Geneva, where Vacheron Constantin has been established for more than 250 years, can be proud of the fact that it is home to one of the world’s most beautiful primitive art museums: the Musée Barbier-Mueller. The product of the passion of a family and of a man, Jean-Paul Barbier-Mueller, this museum celebrates its 30th anniversary this year. Searching for a subject worthy of evoking the human and cultural experience on all the continents, and a way to pay well deserved homage to the various arts and crafts that the brand is known for, the team at Vacheron Constantin came up with the idea of combining ‘primitive’ masks and watchmaking, two expressions of the human soul and genius. Idea in hand, it was up to Juan-Carlos Torres, CEO of Vacheron Constantin, and his team to convince Jean-Paul Barbier-Mueller to participate in this common adventure. The beauty and the pertinence of the project quickly won him over, and the project began.

Arts and crafts
Twelve masks of the Barbier-Mueller collection were chosen to be reproduced on a small scale, and then placed at the centre of the dial of each watch in the Métiers d'Art ‘Les Masques’ collection. There will be 25 boxed sets each comprising four masks produced per year, over a period of three years, for a total of 300 watches.
This new collection is the occasion for Vacheron Constantin to demonstrate once again its extraordinary and age-old mastery in the realm of decorative arts and crafts. For its 250th anniversary, celebrated in 2005, the Geneva manufacture created its first exceptional collection, which was named ‘Les 4 Saisons’. Limited to twelve boxed sets comprising four watches, each illustrating a season, this collection combined the crafts of gold sculpture and engraving, jewellery, painting on miniatures, and enamelling. At the centre of the dial was enthroned Apollo’s chariot drawn by four horses. To make the necessary space on the dial, a specific automatic winding movement was created, the Calibre 2460, bearing the Geneva Seal (Poinçon de Genève). It was most notable for the absence of hands, which were replaced by four windows – hours, minutes, day, and date – thus leaving the centre of the dial clear, and allowing the craftsmen a freedom of artistic expression. This same movement was redesigned for the ‘Les Masques’ collection.
In order to ensure that the mask is the focus of attention, and to give it an aura of mystery, the movement was made to disappear into the background using a sapphire crystal tinted by metallization. Each mask has its own colour. The masks then seem to float in space, at arm’s length. Each one is surrounded by a poem in prose by the French writer Michel Butor. The lines spiral around each other in a mysterious message that is seen only when the light hits the crystal at a certain angle, the result of a highly sophisticated technique using vacuum metallization in which the gold letters are sprayed onto the crystal.

Faithful reproductions
This marriage of traditional craftsmanship and advanced technology is also what allowed the most faithful miniaturization possible – an imperative demand imposed by the Barbier-Mueller Museum – of the four first masks that were entrusted to the Vacheron Constantin team. At all cost, it was necessary to replicate the exact expression and patina of the original mask, to convey the wear and tear it suffered over the passage of time, and to reproduce the marks of the sculptor’s chisel or burin, as well as the scratches and traces of verdigris.
At the beginning, each mask was scanned in order to realize a three-dimensional image. This model allowed the craftsmen to find the best angle for presenting the mask in the small confined space of the watch’s case. Using laser technology, the initial model allowed the exact forms, including the high and low points of the volume, to be determined. The prototype was made in gold since other materials such as wood, copper, shell, or hair did not lend themselves to the requirements of miniaturization. Once the form of the prototype was created, the engraver could begin his hand work. With a chisel, he delicately went to work on the reliefs, carving the raised areas and the hollows, replicating as closely as possible the effects of time, while recreating the traces left by the burins of his predecessors so many centuries earlier.
The treatment of each mask’s colour was in itself a whole new adventure. By mixing various colours of gold, using ancient formulae for galvanic and chemical treatments, and creating a chemist’s bench complete with a traditional alembic, followed by hand touch-ups with paint, the artisans were able to achieve amazing results. As one example: how to reproduce the traces of verdigris found on the 1000-year old Chinese funeral mask from the Liao dynasty? Since gold does not oxidize, a protective coating was invented. The engraver deposited small amounts of copper onto the gold, which were then oxidized. The final mask looked like it had traversed many centuries.

The expression of a heritage
While ‘Les Masques’ are a splendid homage to the entire human patrimony, Vacheron Constantin’s aptly-named Patrimony collection is the expression of the heritage and watchmaking savoir-faire accumulated by the company over the last 250 years. Rounded lines, elegance, and timeless classicism represent the purest form of timekeeping tradition, a tradition comprised of two distinct stylistic expressions: the Patrimony Traditionnelle and the Patrimony Contemporaine collections.

Patrimony Traditionnelle
The Patrimony Traditionnelle line, marked with purism and rigour, draws inspiration from the codes historically developed by the manufacture, and is associated with fundamental timekeeping values. With refined bezels, silvered dials, dauphin hands, curved cases, and tiered horns, a whole tradition is expressed in the language of these clearly defined codes, while at the same time embracing modernity.
This prestigious line encompasses the highest level of complications, such as the Tourbillon Perpetual Calendar Minute Repeater, as well as a simpler version with an automatic movement and small seconds hand.
But it also allows the brand’s master watchmakers to express their complementary savoir-faire by combining watchmaking art with decorative art, as in the Patrimony Traditionnelle Perpetual Calendar Skeleton. The piece’s 1120QPSQ movement distinguishes itself by the complexity of its décor, inspired by the forms and motifs that make up the Eiffel Tower, and the fineness of its execution. Bridges and wheels, cut-out and engraved with Art Nouveau designs, as well as overall execution and exceptional finishing, make this ethereal piece a reference in the realm of skeletonization. The transparent sapphire crystal dial is encircled by a silvered ring that integrates the motion-work and the indices, allowing the large indications of the perpetual calendar and lunar phases. It thus has perfect readability and a remarkable vision of the openwork movement. Made in 950 platinum and in 18K rose gold, the Patrimony Traditionnelle Perpetual Calendar Skeleton timepiece is quite simply a work of art.


Patrimony Contemporaine
The Patrimony Contemporaine line, also refined and elegant, expresses the same fundamental values of watchmaking rigour and design classicism that have been inherent in Vacheron Constantin’s timepieces for more than 250 years, but this collection draws inspiration from the ultra-flat models that marked the last half-century of the brand’s history. The lines are straight, the profiles refined, the diameters ample. The slender trapezoidal indices, baton hands, domed dials, and circular-grained motion-works with golden cabochons are the design codes that characterize this classic and demanding piece.
One of its most recent examples underscores the combination of apparent simplicity and true timekeeping complexity: the Patrimony Contemporaine day-date bi-retrograde. Two retrograde indications display the hours and minutes. The day of the week and the date are subtly shown on the large silvered opaline dial, which is curved on its exterior. The precise hands of these two retrograde displays are made of a special alloy for lightness and elasticity. Their instantaneous return to the departing point occurs in less than one-tenth of a second, over an arc of nearly 180 degrees, requiring a considerable amount of force in a mechanism of this size. The timepiece is equipped with the automatic in-house Calibre 2460R31R7, featuring 28,800 vibrations per hour, a power reserve of 40 hours, a 22 carat gold oscillating weight with guilloché decoration equipped with a ceramic ball-bearing system, and, of course, it is stamped with the Geneva Seal (Poinçon de Genève).
The large 42.50 mm rose gold case is water-resistant to 30 metres and has a transparent convex sapphire case back. It represents a concentration of Vacheron Constantin’s genetic code, which we also find at the height of classicism in the very lovely Patrimony Contemporaine automatic piece.

Europa Star will return in its next edition to the Patrimony family, and analyze in more detail a true masterpiece: the Patrimony Traditionnelle ‘Calibre 2755’.