To cement its position as a watchmaker, Panerai has introduced a family of in-house movements, including a stunning new tourbillon.

To cement its position as a watchmaker, Panerai has introduced a family of in-house movements, including a stunning new tourbillon.

Officine Panerai is that once-in-a-generation watch brand, a convergence that puts it all together, creating a mystique and an obsession. Every watch brand aspires to what happened to Panerai, where the watch, due to a mixture of legitimate history, timeless and unique design and exclusivity, caught fire. Ten years after the Richemont Group took over the brand, Panerai is one of the hottest on the planet, with no signs of slowing down.
Founded in 1860 by Giovanni Panerai, the company started as a manufacturer of precision instruments and watches to the Italian Navy, and the brand was not even available to the public until 1993. Before its public launch, Panerai was a favourite on the auction circuit because only legitimate members of the Italian Navy could buy Panerai watches, making them quite rare.
No one would blame Panerai for doing things the easy way - continuing to make classic watches and selling every one they make. Goodness knows that many brands have survived and thrived doing just that.
Panerai, however, is definitely out of the ordinary.
Instead of resting on its laurels, Panerai surprised just about everyone by announcing a slate of new manufacture movements, signalling its desire to move into true watchmaking, solidifying its future in the luxury watch sector.
“The in-house movements allow us to enter a new segment of the market,” Angleo Bonati, Panerai’s CEO, explains. “We are doing great business right now and we are very happy, but you cannot continue to survive in this segment because the risk is that the sector will become narrower and narrower. With the in-house movements, we can enlarge our potential and develop our brand for the future.”
The in-house movements were designed under the direction of Eric Klein, the Richemont Group’s Movements Coordinator, who started work on this project, in order to create a family of Panerai manufacture movements back in 2002. “It was really a very tight collaboration with Panerai to define this movement family,” Klein says. “We wanted to be different, we wanted to adapt this military watch, bringing reliability and very useful functions into the mix. We started with the P.2002, which we presented last year and is currently in production. Now, we have three new movements - an automatic, a chronograph and a tourbillon.” 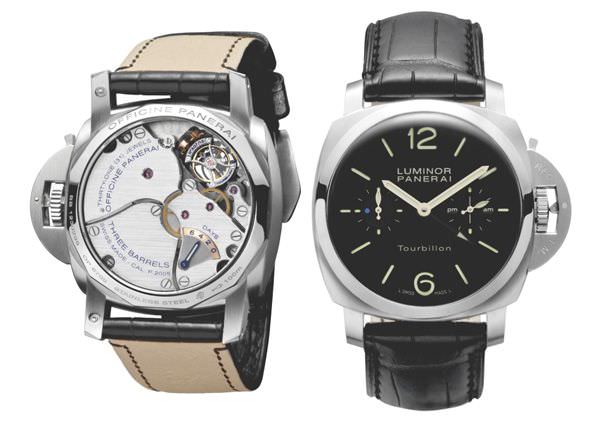 
Leading the charge, and designed to confirm Panerai's high watchmaking aspirations, is Panerai's new tourbillon. “Panerai wanted a tourbillon, but we had to make it totally different,” explains Klein. “We finally found that difference in September 2005. You see, in all wristwatches, the amplitude when the watch is flat is different than when the watch is vertical. We wanted to use the tourbillon to make a compensation in order to get the same rate in any position.”
Bonati wants Panerai to be known as a watchmaking brand, not as a lifestyle or design brand. “We would like to keep our authenticity and to grow in our technical knowledge, otherwise we can't claim that Panerai is a technical watch brand,” Panerai’s CEO continues. “The major issues we have had were due to problems with the movements, not the designs or the cases.
”We always try to propose something to our clients that is exclusive and authentic, we are linked to the history of the brand, the design, the size, the passion - there are a lot of things to this mix. It is a cocktail of positive things that gives us the possibility to be successful."
Panerai's manufacture, where all the watches are assembled and controlled, is in Neuchâtel, Switzerland (the brand's headquarters are in Milan, Italy). We don't want to put products everywhere just to make business. If you do that, you cannot survive longterm, especially if you are a new brand. Panerai cannot make any mistakes because the company is young - we don't have enough awareness to allow us to make any mistakes."
Panerai has a lot of new projects in the pipeline for the future. There are new movements and watches now being worked on for 2011, so you can expect to see new things from Panerai every year. “The realization of this wonderful Tourbillon has the objective to show that Panerai wants to build up its story as a qualified watchmaker in the world of the high-end watch,” Bonati says. “High complications themselves are not the objective of Panerai - know-how and expertise are. We can say that the tourbillon is a demonstration of our high technique capacity.”

P.2005: The Calibre P.2005 is a movement with a tourbillon escapement, a complication notable for the difficulty of its construction and the accomplishment of which is the result of the outstanding craftsmanship of master watchmakers and the most advanced computer technology.
The special feature of this movement from Panerai lies in the fact that the tourbillon cage rotates on an axis at right angles to the axis of the balance wheel and that it makes two ro-tations per minute: this rotation, which is faster than usual, ensures greater accuracy, providing the best compensation for the irregular rate caused by the effect of the force of gravity. The motion of the tourbillon, which attracts the attention of everyone who looks at it, can be admired from the back of the watch, while on the dial side there is a little circular blue indi-cator, within the seconds counter at 9 o’clock, which travels twice as quickly as the seconds hand because it moves at the speed of the tourbillon cage.
P.2002: This was the first movement developed by Officine Panerai. The power reserve, with eight days of autonomous operation picked up from the Angelus movements of the 1940s, has been achieved through an energy accumulator of a new design consisting of three spring barrels. The system for setting the time uses the second reset device (which with the GMT function will also appear in the next three movements developed), which stops the balance and causes the seconds hand to spring back to zero when the winding crown is pulled out, facilitating accurate setting of the time and synchronization with a time signal being used as a reference. The GMT function, another characteristic of Panerai watches, uses a method with two hands indicating 12 and 24 hours.
P.2003: The unusual feature of this mechanical movement is its automatic winding with a power reserve of 10 days (240 hours). As in the case of the P.2002, such a prolonged power reserve is possible because of the energy ac-cumulator system of three spring barrels: two of these are located one above the other, while the third is linked through a gear train which enables the remaining power to be indicated on an appropriate graduated scale.
This new movement has been constructed according to the quality standards of Officine Panerai, as shown by the brushed finish of the structural parts with chamfered edges and polished screws. The oscillating weight is also of brushed finish and is personal-ized by the logo and the brand name in blue.
P.2004: As the first chronograph movement created entirely by Panerai, this movement is an expression of the quality of mechanical tradition applied to sports watches.
The Calibre P.2004 is a hand-wound mechan-ical movement with a single button column wheel chronograph, which combines the start /stop/reset functions in a single push-piece. This push-piece is positioned at eight o’clock so as to maintain the signature appearance of Luminor watches, with the bridge protecting the winding crown, a distinctive feature of the design of Luminor cases. Its position also allows the most immediate control of the operations of the chronograph when making time measure-ments. The chronograph seconds hand is in the centre with the 30-minute counter at 3 o’clock, enabling the measurements themselves to be clearly read. But the heart of the movement consists of the sophisticated system for controlling the chronograph functions: the column wheel, a characteristic feature of high-quality chronographs, ensures the greatest precision in starting, stopping and resetting the chronograph hands.
The back reveals the structure of the movement with its separate bridges, their brushed finish with chamfered edges and polished screws.


Regular line watches
Panerai's collection of watches is simple and distinctive - at one glance you know that any of the models is a Panerai, no easy feat.
The Luminor collection is probably the most distinctive Panerai design, with the emblematic crown protector. The Radiomir is more classical, pre-dating the Luminor design, and doesn't use the crown protector. Both collections are unabashedly big - and they were big before big was the thing.
The in-house movements will make their way into Panerai's regular line watches as needed. “Production of in-house movements for Panerai will be for our top collection.” Bonati explains. “Our objective is to produce and to commercialize high quality products addressed to a demanding clientele that is looking for exclusivity and authenticity.
”Because of these new movements, Panerai will be stronger in five years than it is now,“Panerai’s CEO continues.”I want Panerai to be con-sidered a watchmaker, because a watchmaker is able to do anything. Our horizon is larger than just complicated watches."
In addition, the newest introduction from Panerai is its new Marine Chronometer, which uses the exclusive OP XX manual winding calibre. Retailing for 31,900 Swiss Francs, the chrono-meter will be available in October of this year. “The marine chronometer underlines the respect of our history and our tradition linked to the sea, as well as to further show that Panerai is able to produce watches with a very high functional and technical quality,” Bonati explains.

Panerai and Ferrari
At the most fundamental level, it certainly makes sense that Officine Panerai and Ferrari are working together. Ferrari is the most famous Italian car manufacturer in the world, while Panerai is arguably the most famous and most successful Italian watch manufacturer. Working together on watches is, because of this, a natural. In 2005, when Panerai announced that it was going to be the partner for Ferrari, the news came across on two levels - on one level it raised some eyebrows because Panerai had never been involved with cars or motor sports, and on the second level it felt right because both companies are Italian and have a history of excellence in their respective fields. 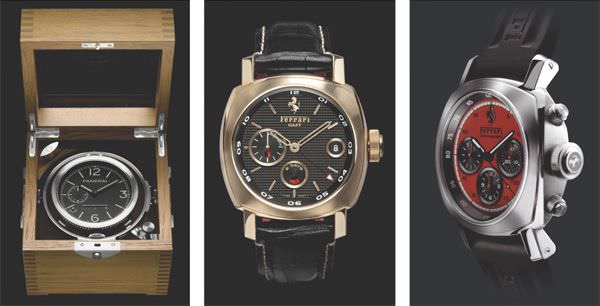 
Designed entirely by Panerai, inspired by Ferrari Design, the Ferrari watches are an attempt to distil the unique DNA from both iconic Italian brands and the result is an interesting blend of both companies. Even the casual watch person can recognize that the new collection is from Panerai and the watches have design cues taken from Ferrari cars, including case shape, which is evocative of the car body, the prancing horse and the instantly recognizable Ferrari logo.
The partnership with Ferrari is the first in a long line of big things Panerai is planning. “We have a lot of ideas for the next ten years and we have to work very hard to achieve all the objectives we have fixed,” Bonati details. “We are in a new phase of the brand: the first phase was to establish the basic foundation of the brand. Now we have to grow and conquer more markets and build the awareness worldwide.”

With these new movements introduced on the tenth anniversary of its rebirth, Officine Panerai signals its desire to join the ranks of true watchmakers. Not content to be an image brand, trading on its historical designs and heritage, Panerai has taken a risk and stepped outside of its box, and so far the future looks bright indeed.