Founded in 1755, Vacheron Constantin has lived through many events during its age-old history—the French revolution, the Napoleonic era, the industrial revolution, World War I, the crash of 1929, World War II… It would certainly, however, not be correct to say that the company traversed all these changes without the least little incident. One thing we can say, though, is that, more than 250 years after its creation, Vacheron Constantin has not only never stopped its watch production, but today it is more active and stronger than ever. This perseverance can be credited to a rare quality—the absolute consistency in its practice of the art of timekeeping. But can timekeeping be classified as an ‘art’?
Contrary to other human activities, art does not really experience ‘progress’ as such, but rather it undergoes ‘transformation’. In other words, a prehistoric painting in the Lascaux caves or an ancient Greek statue is neither ‘better’ nor ‘less good’ than a Picasso. Taking this into consideration, we could say that this also applies to Vacheron Constantin’s way of practising watchmaking. In other words, a Vacheron Constantin watch of today is neither ‘better’ nor ‘less good’ than a Vacheron Constantin timekeeper from the 18th century. Both are the fruits of a pro-digious accumulation of expertise in the realm of timekeeping. Both are part of the same long history. Yet, during this time, the techniques themselves have assuredly experienced progress. But the watchmaking art that presided over both of their births reposes on the same basic pillars: a mastery of the techniques of the epoch; a design excellence providing product elegance, regardless of the current dominant trend; and the important role of artisanal skills and crafts in each piece. In this manner, the brand has created its own heritage over the centuries, a heri-tage that seeks to perpetuate its own form of watchmaking excellence. 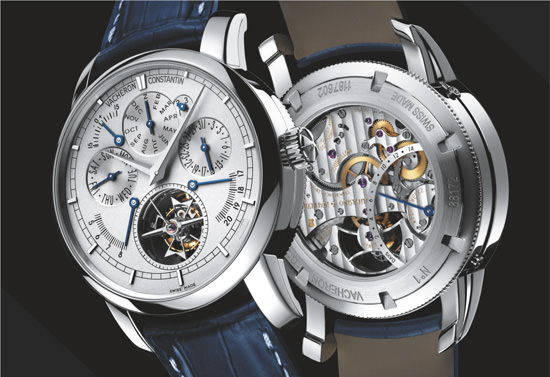 This tradition of timekeeping excellence, based on technical equilibrium and aesthetic mastery, has expressed itself in different ways over the years. It ranges from the seemingly simplest and most austere movements (what comes to mind are the ultra-thin calibres [see Europa Star 6.09], which are one of the manufacture’s speciality) to the most complex calibres as exemplified by two of the most recent calibres created for the brand’s Patrimony Traditionnelle Collection: the calibres 2253 and 2755. But regardless of whether a watch has only two hands or a multitude of astronomical functions, a Vacheron Constantin will always be representative of the same approach to the art of timekeeping—to create something timeless that exemplifies and enhances the single purpose of a timekeeper.
As an example, let’s take a look at two of the brand’s most recent propositions: the Patrimony Traditionnelle Excellence Platine collection and the Métiers d’Art – La Symbolique des Laques collection.

Astronomical watchmaking
During the last SIHH, Vacheron Constantin presented three highly complicated models in the Patrimony Traditionnelle family, all crafted in platinum, hence the name Collection Excellence Platine. Three new calibres equip these timekeepers: the Calibre 2253, a perpetual calendar tourbillon with astronomical indications, the Calibre 2755, a perpetual calendar tourbillon with minute repeater, and the Calibre 1141QP, a perpetual calendar manual-winding chronograph.
All three deserve to be meticulously dissected but, as an example, let us look in detail at the most complex watch of them all, the Patrimony Traditionnelle ‘Calibre 2253’. The sum of a vast amount of accumulated knowledge, this is a tourbillon watch that displays a perpetual calendar, equation of time and the times of sunrise and sunset. This astronomical watch also has a rather uncommon, if not unique, power reserve of 336 hours—14 days—thanks to a system of two pairs of coupled barrels. The power reserve indicator is visible at the back of the timepiece through the sapphire crystal case back.

Developed from the Calibre 2250 that equipped the Saint-Gervais watch, which Vacheron Constantin presented in 2005 in celebration of its 250th anniversary, the Calibre 2250 required several thousands of hours of development time. Let us remain for a moment on one of the most complex and captivating indications of this calibre, the equation of time. This function allows the wearer to calculate the difference in minutes between the constant mean solar time and the ‘true’ solar time. The ‘true’ solar time varies throughout the year because the Earth’s orbit around the sun is elliptical rather than circular. Thus, the noon hour of the solar time and mean time coincide only four times a year—on April 15, June 14, September 1, and December 24. For the rest of the year, the solar time varies from the mean time by between -16 to +16 minutes. The equation of time indicates precisely this difference, day after day. To succeed in creating this complication (developed for the first time in the 17th century by the famous Nikolaus Mercator), the watchmakers had to create an ‘equation cam’. This small metallic piece whose profile is in the form of an analemma (see the illustration above) rotates on itself once a year and from its precise position can be calculated the indication of the ‘true’ noon.

Fictional photomontage illustrating an analemma pattern in the sky. If one were to take a photo of the sun each day for a year from the same position and combine the images taken, this pattern would be visible. (Photo: Jailbird)

Another astronomical indication of this calibre is the display of the times of sunrise and sunset. Here again, this indication is provided using a cam although its form is unique because it depends on the longitude and latitude of a particular location. This amazing complication can thus be calculated and realized only for a specific place, with the client himself choosing for which location of the world he wants the times of sunrise and sunset displayed.

High degree of artisanal finishing
As would be expected, the finishing of this remarkable astronomical timepiece has to be up to the same level as its technical prowess. The watch is entirely crafted in platinum (case, crown, dial, hands and clasp) and, for the ultimate in refinement, the dark blue alligator strap is hand-stitched with a mixture of platinum and silk thread. A precious white metal and 95 per cent pure, platinum is 30 times rarer than gold and has a higher density and weight. Stamped with the Poinçon de Genève (Geneva Seal), the watches in the Collection Excellence Platine are finished in an exceptional manner: sand-blasted silvered dial with blued counter hands, circular brushed sub-dials, diamond-polished filets, applied hour markers and Maltese Cross in 18-carat white gold. The decoration of the movement features the Côtes de Genève pattern, circular graining, hand-chamfering, straight graining of the steelwork and the rounding off of the top of the tourbillon bar (this operation alone requires 11 hours of work).

Métiers d’Art and civilizations
If the Collection Excellence Platine exemplifies mastery in the art of timekeeping, the Métiers d’Art collection accomplishes this in a similar, but different way, by providing each of the age-old artistic skills their own watch environment in which to showcase their excellence.

After the art of grand feu enamelling celebrated in 2004 with the Hommage aux Grands Explorateurs collection, it was engraving’s turn to be honoured with the extraordinary collection of Les Masques in 2007. These watches were designed—and not just by chance—in collaboration with the Barbier-Mueller Museum in Geneva. We say ‘not just by chance’ because the depth of the design and the artistic approach to the pieces in this collection were closely tied to the rich cultural backdrop that the pieces aimed to celebrate and even transcend. Three years ago, the Métiers d’Art collection embodied tribal masks taken from different cultures around the world—some originating at the dawn of time—and this year, the collection, La Symbolique des Laques, is dedicated to the centuries-old Japanese lacquer technique called maki-e.

The maki-e art form is specific to Japanese lacquer and was developed over many centuries during the archipelago’s long history. It reached maturity between the 8th and 12th centuries. A very sophisticated technique, maki-e consists of creating an image or design by sprinkling gold and silver powder onto a wet lacquer (and not just any lacquer but a special type that originates from the Rhus verniciflua tree—or urushi in Japanese).

Cultural exchanges
Vacheron Constantin, whose connections to Japan date back to the early 1800s, ap-proached Zohiko, one of the oldest and most highly-respected companies specializing in maki-e lacquer in Japan. Established in 1661 and with close ties to the Japanese Imperial Court, Zohiko has refined this highly complex art over the years.
In the same vein as what Vacheron Constantin does in relation to its heritage, Zohiko is also a brand, which is as deeply rooted in a strong artisanal tradition as it is open to the world, a brand that cultivates continuity while always seeking to improve its art form and its practices. The meeting of these two—and in some ways not dissimilar—companies resulted in a remarkable collaboration of “extraordinary intensity, a veritable human adventure, a voyage, a discovery,” according to Vacheron Constantin. See the extraordinary history of maki-e and its techniques, click here.

Harmony between lacquer and movement
What is most striking at first glance when you hold a watch from the La Symbolique des Laques collection in your hand is the way that watchmaking and maki-e share the space, making room for each other to exhibit their own expressive power.
At the centre of the dial, we find the skeletonised ultra-thin calibre 1003 in 14-carat gold, specifically treated with ruthenium in order to attenuate somewhat the brilliance of the gold, thus balancing it harmoniously with the work of the maki-e. In the same spirit, the two hands of the movement remain confined to the centre, and thus do not encroach into the larger circular space—the dedicated realm of the piece’s decorative motif.
Taken from the animal, vegetal or mineral world, this motif draws inspiration from the reservoir of far-eastern symbolism. Also associated and combined with another design inscribed on the case back in a similar configuration (the back of the skeletonised movement is visible under the sapphire crystal at the centre of the decorated dial), it evokes a multitude of meanings and symbolic combinations at the crossroads of literature, poetry, mythology and the world of heroic or divine beings.

The first set of three watches has just been released. (The collection will be issued for three years, with a total of three sets, each with three watches depicting different motifs, for a total of nine in all, each produced in a limited series of 20, for a total of 60 sets.) Depicting the theme of longevity, the first set brings together ‘The Three Friends of Winter’ made up of pine, bamboo and plum—trees that are strongly resistant to severe cold and that symbolize longevity and loyalty.
Each of these ‘three friends’ is traditionally associated with an animal: the pine that ages so well is joined by the white crane (although legend has it that when it reaches 2,000 years of age, the crane’s feathers turn black); the bamboo that bends under the snow or the wind and then quickly snaps back to normal with as much vitality as a hyperactive sparrow; and the plum tree whose early fruit announces the coming of spring as the nightingale sings the same message. In Japanese culture, these associations gave rise to many expressions whether in the paintings of Zen Buddhism, in the very concise art of Haïku or in other myths and customs.
The very close artistic, artisanal, and cultural association of these two art forms offers Vacheron Constantin an expression that is rich in analogies and that fully showcases the value of the subtle work of the watchmaker. In these timepieces, maki-e and watchmaking speak to each other harmoniously in a veritable aesthetic and technical dialogue between cultures and civilizations. ‘Occidental’ time and ‘Oriental’ art are created together in the ‘same lacquer’.