High-tech ceramic, extreme water resistance and cutting-edge crowns on dials are just some of the innovations that are positioning Chanel at the forefront of horology.

High-tech ceramic, extreme water resistance and cutting-edge crowns on dials are just some of the innovations that are positioning Chanel at the forefront of horology.

When Chanel launched its J12 back in the year 2000, the brand could have just put its famous name on a watch and been content to rest on its laurels. Instead the company made a point to do things differently with new materials and captivating mechanics, that have made even the most serious Swiss watchmakers sit up and take note.

Dynamic ceramic
It all started with the use of a material that most people associate with the common bathroom tile – ceramic. In fact the word itself comes from the Greek κεραμικός (keramikos) which means ‘of pottery’. However, today’s ceramic material is now an essential component of products as diverse as space shuttles, ballistic armoured vests and bio-medical implants. It is scratch-resistant, hard-wearing and incredibly lightweight which makes it an ideal material for a myriad of applications. However, no one had yet transformed it into a luxury material to rival the diamond until Chanel mastered how to manufacture it. 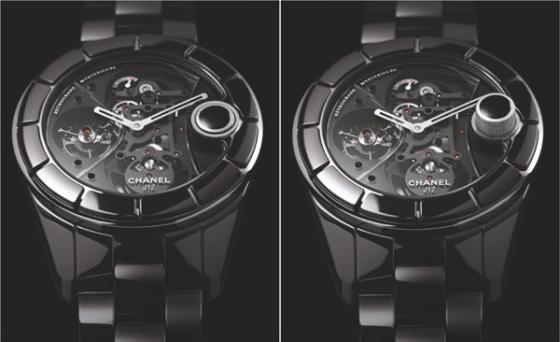 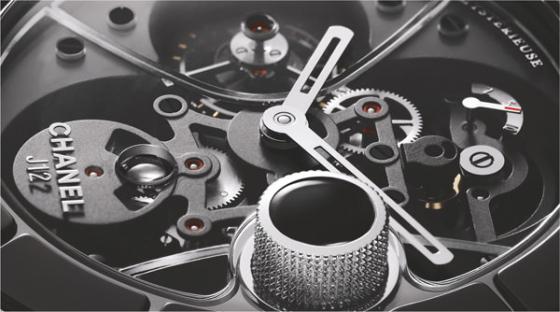 Link by link
The precise recipe for ceramic is not available in the public domain, so it took Chanel ’s scientists six years of research, trial and error to come up with the perfect formula. However when you see the results, it was certainly worth the wait. The vast majority of watch brands using ceramic today buy it in block form and then mill it to the desired shape, in comparaison to Chanel who make each and every bracelet link and case to size, creating a far superior quality of ceramic that is instantly recognisable.
To discover how this magical material is made, see Chanel and the chamber of secrets in Europa Star 5/2009 or on www.europastar.com.

The iconic J12
When the first J12 was launched, it came as quite a shock for the Swiss watch industry whose brands, at that time, hadn’t yet ventured far beyond the use of gold, platinum or steel. Commercially the J12 was an instant success and has evolved in many artistic and technical directions since. 2005 saw the arrival of a J12 fine jewellery collection and a J12 tourbillon. 2006 was marked by a J12 GMT and a haute joaillerie piece with 597 baguette diamonds. In 2008 the company announced a partnership with Audemars Piguet for an automatic movement - the Chanel AP 3125. 2009 saw the presentation of the J12 Noir Intense, a ceramic-set timepiece (instead of baguette diamond set) in white gold. Just as we thought that everything that could be done, had been done, Chanel let off a succession of fireworks for the J12’s 10th anniversary in 2010 with a mini J12, a new depth-defying Marine Collection and a breathtaking new complication that challenges watchmaking as we know it.

Mini or maxi?
Until this year the ladies J12s had only been released in 33 mm, 38 mm, 41 mm or 42 mm - relatively large sizes in the history of women’s watchmaking. This trend for large women’s watches has been present in the watch industry for over a decade and remains incredibly strong, but a recent parallel trend for smaller timepieces has also appeared in certain markets. Chanel has responded to this overlapping of size trends with the addition of a 29 mm case so women who love the style and workmanship of Chanel ’s J12, but who are looking for an elegant timepiece that is a little more discreet in size, can also appreciate the beauty of a J12.
The J12 29 mm is equipped with a quartz movement and, like its older sisters, features black or white high-tech ceramic, diamond indexes and a white mother-of-pearl or black lacquered dials.

J12 Marine
The J12 collections have always had a trace of a diving design in their composition, with their bold ceramic bezels and great readability thanks to their contrasting hands and dials. The brand has taken these cues and created a genuine diving timepiece - the J12 Marine - whose design and performance are perfectly suited for both deep sea diving expeditions and evenings at the yacht club.
The J12 Marine is available in three versions and two sizes: blue (available in 38 mm or 42 mm), black (42 mm) and white (38mm) and not only looks spectacular, but can also resist pressure equivalent to a depth of 300 metres under the sea, a feat that few diving watches can achieve.
Some of the most impressive features include a date and immersion time reading on the bezel; a highly resistant, mat rubber strap with openings that allows the release of water; black lacquered dial with luminescent hands and numerals for perfect readability in darkness and a sapphire crystal with blue anti-reflective coatings on both sides. 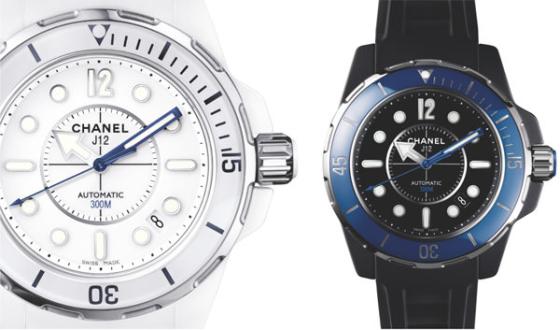 The firework finale
Chanel doesn’t need to remind us how serious it is when it comes to the technology inside its ceramic cases. Its offering includes GMTs and tourbillons, and the brand has partnered with the prestigious Audemars Piguet for a unique and exclusive automatic calibre, the 3125. But for the finale of its 2010 introductions, Chanel went one step further and joined forces with the famous movement constructor Renaud & Papi to create a timepiece that was like nothing anybody had ever seen before.

Transforming time
One of the wishes of Chanel when starting out on the project with Renaud & Papi was to have a completely round timepiece, which meant that the crown had to be relocated to the back or the front of the case. Putting the crown on the back has been done many times before so the constructors decided to break with all watchmaking codes and put the crown directly on the front of the timepiece, traversing both the crystal and the dial.
From a design point of view, the result was visually stunning, but from a technical point of view, it created all kinds of problems. However, the great thing with problems is that they can often translate into some of the most intriguing solutions and this is what happened with the Rétrograde Mystérieuse. The problem in this case was that the position of the crown (positioned between ten past and 19 past the hour) blocked the minute hand from continuing its journey around the dial. So the constructors found a solution so that the minute hand would reach the crown and then go backwards all around the dial until it rejoined the 20 minute mark. To avoid misreading the time, a digital display illuminates when the hand is regressing with the correct minute reading. When the minute hand is advancing normally the digital display turns off.
Like many of today’s unusual time displays, it sounds complicated in words, but once you get used to it, two hands can seem rather boring in comparison!

Continuous inspiration
J12-mania has now been ongoing for over a decade and there seems to be no end to its success with a multitude of innovations within one collection. The brand continues to challenge the boundaries of watchmaking from the materials, to complications and design. Just as when it started, Chanel is not content to stagnate, but instead finds inspiration year after year. We can’t wait to see what this year has in store!