“All the pieces in the puzzle are now falling into place. Image and awareness are stronger than ever,” they say with delight at Tudor. Since 2007, the year of the great strategic change that brought the brand to its current level of visibility, it has therefore taken a mere lustre for Tudor to reconnect with its rich past. Having rediscovered its strong identity, Tudor today offers powerful and recognisable products that hark back to its past but by no means neglect the present. This seems to work and Tudor has succeeded in creating a buzz: the latest video advertisement for the Tudor Heritage Chrono Blue has been viewed over 350,000 times on YouTube and that for the Tudor Fastrider Black Shield 150,000 times.

Tudor has a veritable treasure trove of history. And it is on the rediscovery of this heritage that the brand is basing its return to strength by creating the eponymous Heritage line, which has since become its trademark. But while the name Heritage speaks for itself, this is not simply a question of reissuing emblematic, and in some cases iconic, models. A different and more interesting approach has been taken: that of historical touches and accents on technical pieces that are well aligned with contemporary tastes.

Stylistically, we could say that the Tudor Heritage watches convincingly manage to assimilate, with coherence and balance, elements from the past and signs of modernity, vintage touches and technicality. A particular type of style begins to emerge, with familiar yet tighter lines, geometric touches of colour, reworked hands, three-dimensional hour markers, the use of SuperLuminova. It is a style that has been meticulously defined and manages to cover all segments and reach different “targets”, both young and less young, a mixture of “trendy” and nostalgic people. 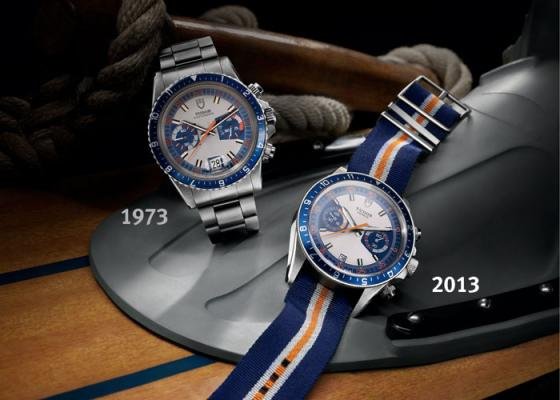 The famous fabric straps, which have become a distinguishing sign of the brand, have undoubtedly played an important role in this. These have nothing to do with the so-called “Nato” straps, which are a lot more rigid and don’t have the same unbelievable level of comfort as the Tudor straps. The essence of Tudor’s combined historical and contemporary approach is illustrated perfectly by these exclusive bracelets which, although they are made of high-technology fibres (notably polyethylene) that are ultra-resistant to salt water, sunlight and acidity, are nevertheless woven in the old style in an historical factory that is among the oldest ribbon makers still in existence, and which employs some incredible craftsmen who still weave using wooden tools.

As (indirect) proof of Tudor’s return to grace, old watches have been taken out of the draws, collectors have become infatuated with the brand and prices for historical Tudor watches have rocketed at auction. In some cases the values of iconic vintage Tudor models have tripled or even quadrupled.

Tudor’s current collection is situated in the highly competitive “premium” segment but the brand can now clearly show its difference thanks to the undeniable aesthetic success of its collection. With an accessible average price of between CHF 3,500 and 4,000 (and an entry-level price of CHF 2,000) Tudor also finds itself in a favourable momentum, with the general economic situation forcing customers to look for alternatives that are both quality and affordable. It is against this background and with this renewed dynamism that Tudor will be reintroduced on the USA market this autumn after 17 years of absence. This is a vital relaunch for Tudor, which is very strong in China (where the brand has been present for 40 years) and Hong Kong and “in development” elsewhere, according to the brand’s management. A “very big launch” they admit, with the aim to open “hundreds of points of sale” in a market that is especially favourable in this price segment.

The new products presented this year at BaselWorld (in a magnificent and imposing stand that was, for the first time since 1926, on its own and illustrated the renewed ambition of the brand) will play an important part in this carefully prepared reconquest. Several of these new products recall one of the historical specialities of Tudor: chronographs. This long story started 43 years ago. In 1970, Tudor released the Oysterdate chronograph, which made its mark not just because of its technicalities but also because of its audacious design, which was characterised by orange accents and pentagonal hour markers. Three years later, in 1973, the model that was nicknamed “Montecarlo” by collectors, which had a bidirectional bezel in anodised blue aluminium and a grey and blue dial, became emblematic. In 1976, Tudor released its first chronograph with a self-winding movement, the Chrono Time, then in 1989 it was the turn of the Prince Oysterdate chronograph, with its very elegant cream counters on the black dial. In less than two decades, Tudor has thus made its mark in the competitive field of chronographs.

“A spirit of chic, glamorous and carefree leisure, with a Mediterranean touch, characteristic of the 1960s and 1970s”

For lovers of vintage heritage, the Tudor Heritage Chrono Blue should be the success of the year. It is basically a contemporary reinterpretation of the Tudor “Montecarlo” from 1973 (ref. 7169), which is highly sought after by collectors. It evokes a certain “spirit of chic, glamorous and carefree leisure, with a Mediterranean touch, characteristic of the 1960s and 1970s,” as the brand’s management explains. All the aesthetic codes of the historical piece have been preserved, or slightly adapted, starting with the chromatic harmony of blue, orange and grey that indicates its modernity. 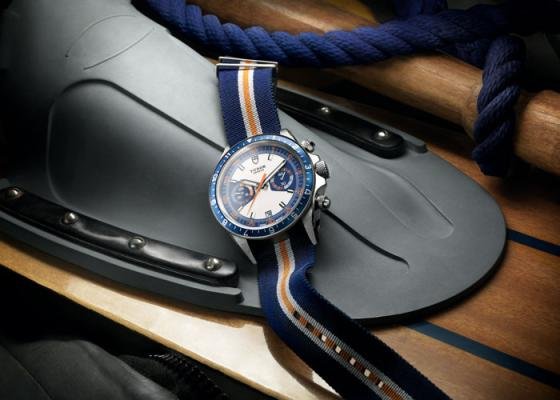 The graphic design of the dial is close to that of the original, with its 45-minute counter (divided into three zones of 15 minutes) off centre at 9 o’clock and its small seconds off centre at 3 o’clock, both housed inside blue trapezoids that give the watch its characteristic look. This “strength of character” is reinforced by new three-dimensional hour markers that surround a layer of SuperLuminova. With its bidirectional rotating bezel and disc in anodised blue aluminium, the 42mm steel case (compared with 40mm for the historical model), which is polished and brushed, with tight lines and lengthened lugs, is also characterised by a screwed-in crown and pushers with a fine knurling and a polished finish. A lacquered blue Tudor emblem features on the crown. Under the sapphire crystal beats a Tudor 2892 movement with Dubois-Dépraz additional module (for the 45-minute counter). 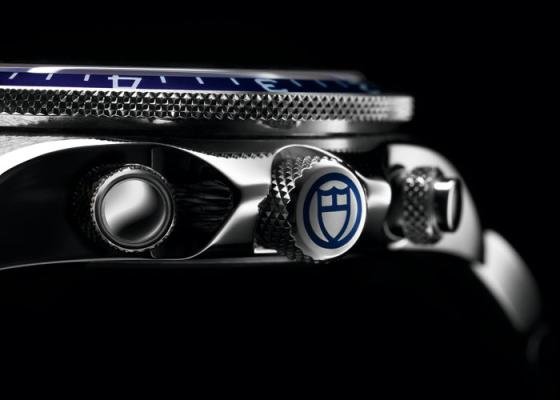 Retailing at CHF 4,200, the Tudor Heritage Chrono Blue is supplied with two straps: a steel bracelet and the indispensable fabric strap, which, for this model, uses the emblematic blue, orange and grey colours.

On the completely contemporary side of things, the Tudor Fastrider Black Shield takes pole position. It is the latest model in the Fastrider collection, which is dedicated to speed and performance, a collection that consists of a series of chronographs in steel, fitted with the TUDOR 7753 self-winding calibre. 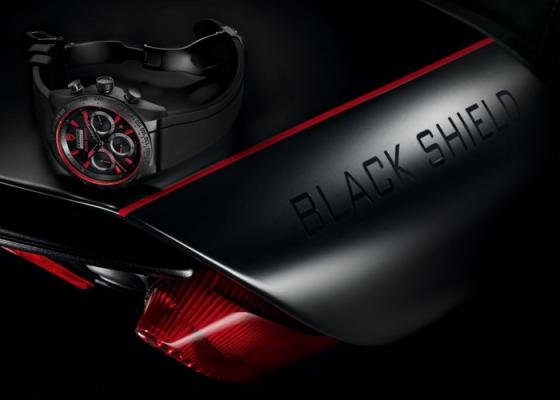 The new Black Shield takes things even further. There is a highly concentrated force that emanates from this matt black piece that is punctuated with red accents. It comes above all from the density of its 42mm case, which is a monobloc piece of high-tech ceramic. Developed and produced entirely in-house, it is produced by injection, from a single piece, which is a highly complex procedure that was only possible thanks to the experience gained from producing the ceramic bezel for the Pelagos divers’ watch. The middle case and bezel, which is engraved with a tachymetric scale, are in ceramic, while the back, the buckle, the pushers and the crown of this chronograph are in black PVD treated steel with a layer of liquid glass that reinforces the material. 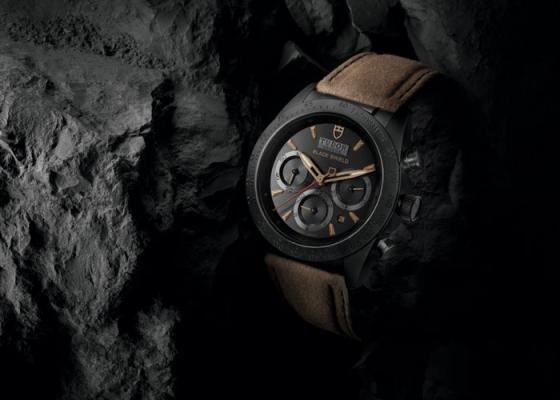 But the strength of this watch also comes from its clear, frank and straight lines, which the lively red graphic design of the hour markers, the tips of the hands, the central seconds, the Tudor shield and the gasket for the sapphire crystal tinted in the same colour all help to underscore. Not forgetting the red stitching on the leather strap. This expressive force changes slightly and becomes more metropolitan in another matt black version where the red is replaced on the hands and hour markers by a bronze tint that is matched with a very nice beige Alcantara® strap with black stitching. In its most direct expression, the Black Shield is also offered with a black rubber strap. Water resistant to 150 metres, fitted with direct-action pushers and using the same TUDOR 7753 chronograph movement, it has a power reserve of approximately 46 hours.

Heritage on the one hand, future on the other… these two chronographs from totally distinct product lines show the scope of the brand’s competence. There is undoubtedly a strong continuity in the history of Tudor and that of the chronograph, but if the codes of the past can be perfectly reinterpreted, it is with an eye towards the future that they must be constantly reinvented.

TUDOR AND DUCATI, A 360º PARTNERSHIP

While a special Fastrider watch was presented in 2011 to celebrate the signing of the partnership between Tudor and Ducati, this time it is a Ducati motorbike that celebrates the arrival of the Tudor Fastrider Black Shield. “We are not linked to Ducati by a traditional sponsoring agreement,” the people at Tudor tell us, “but a 360º partnership that goes far beyond the status of a mere timing partner”. 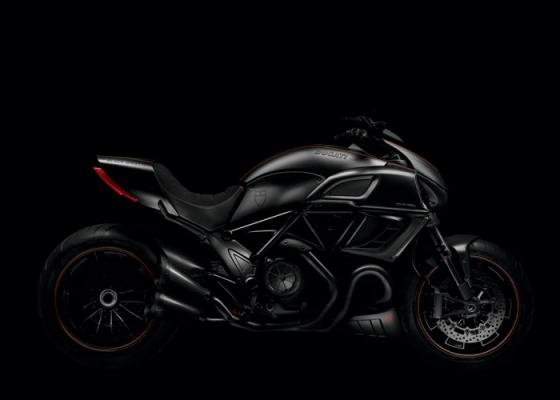 The two companies have taken a novel approach, based on their comparable stylistic philosophies and the numerous points that they have in common, each in their own area of expertise, and the aesthetic and technical history of both brands. The design offices of Tudor and Ducati developed a special motorbike jointly. It is the Ducati Diavel Carbon, which aims to reproduce the spirit of the watch in its appearance and its shape. Produced in monochrome matt black, the single example of this exceptional motorbike reinterprets the codes of the Black Shield: a fine red line highlights the silhouette of the motorbike and even continues in the form of red LEDs in a light surround that is otherwise entirely black; the wheels are surrounded by red band, which gives a strong impression of power. The Ducati Diavel Carbon also features prominently in the launch film for the Black Shield, in which we see it slalom between lava flows to bring us to the edge of the crater where the ceramic case of the watch is born. A beautiful bike but also an excellent communications vehicle.