The Moon. White. Black. The white moon in the black sky… The white heavenly body in the black night sky has always seduced poets. Fascinating, mysterious, the dream-like whiteness of full-moon nights casts a singular spell over our senses. Quite unlike the vibrant and implacable light of the sun, which cuts distinct shadows, the moon shines with a powdery, silvery white light. As the famous French poet Paul Verlaine says in his poem “The white moon”, this light "vast and tender / an appeasement / seems to lower / from the firmament / star-bedecked… Exquisite hour!” 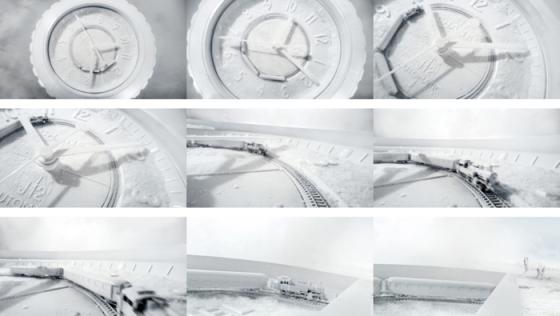 BREAKING THE TABOO OF WHITE

In 2003, Chanel broke a taboo by introducing the colour white to the world of watchmaking. After the black J12, which had already upset the aesthetic codes of watchmaking, the birth of the transgressive J12 in white staggered those in the industry.

Against all expectations, the white J12 was an immediate success and received universal acclaim. Made out of an immaculate white high-tech ceramic that is totally resistant to the vagaries of time, it established itself as a new stylistic reference in watchmaking. White became one of the colours of the moment, henceforth closely linked to the name of Chanel. It was perfectly legitimate for Chanel to introduce white like this because, as Mademoiselle Chanel herself had already said, “white, like black, has it all.”

Alongside the deepest black, pure white is one of Chanel’s most ingrained genetic codes. Because black and white, black or white get to the heart of the matter, revealing the clarity of form, whether in the tailor’s cut, the curves of a camellia, the speed of a comet, the orb of the moon or the sketch of a watch.

Since its birth in black in 2000, the J12 in high-tech ceramic, designed as a highly elegant sports watch, has shown its ability to adapt to numerous different horological designs, from the highest jewellery to the most “complicated”. 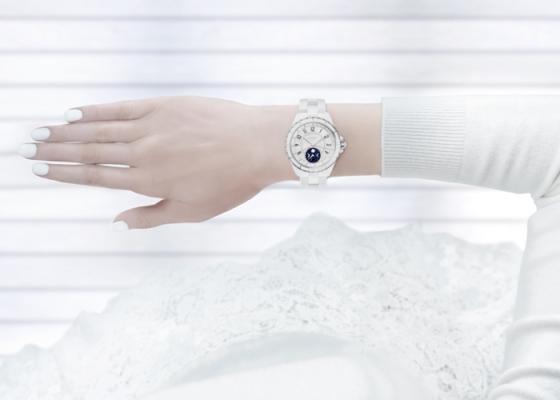 In 2004, Chanel presented the J12 Pièces d’Exception collection, featuring limited editions set with the most beautiful baguette cut precious stones. Black contrasted with the fire of rubies, with the ice of diamonds. In 2005, the white J12 entered the world of high-end mechanical watchmaking with a self-winding tourbillon whose mainplate was made of ceramic, a world-first and a technical revolution. In 2008, the J12 Calibre 3125 was fitted with a self-winding mechanical movement from Audemars Piguet, exclusively personalised for Chanel.

The year 2009 saw the birth of the incredible J12 Noir Intense, whose white-gold case was set with 724 baguettes in high-tech black ceramic, cut and facetted like the most precious of stones. Then came the J12 Rétrograde Mysterieuse in 2010, a concentrate of innovations that mixed complications with world-firsts: tourbillon, digital minutes display, retrograde minutes hand, 10-day power reserve, retractable vertical crown. And in 2011 the J12 was for the first time neither black nor white but a new colour, hitherto unknown in watchmaking, the J12 Chromatic. This colour, achieved by adding titanium to ceramic, is like no other, its particular soft sheen is unique.

In the meantime there have been even more evolutions in the J12 line: the interplay of materials, with matt and polished surfaces, a touch of gold, stone setting. But also the interplay of function with the J12 Chronograph, in black or white, which allows it to give full expression to its sportiness and show off its resistance, the toughness of its materials and its great water resistance. It earns its stripes as a genuine instrument without ever losing any of its elegance.

With the J12 GMT it then became a watch for the traveller, juggling between time zones. The J12 Marine, with a touch of deep blue on its unidirectional rotating bezel, plunged it into the universe of deep-sea diving. Born at the dawn of the century, the J12 has the ability to assume so many different identities without any loss of its stylistic strength or its immediately recognisable look and fully deserves its label as “the first horological icon of the 21st Century”. But there is nothing fixed about this icon and its destiny is set to continue along its promising route.

THE J12 TAKES A SLICE OF THE MOON

After transforming high-tech ceramic into a precious material, after tackling speed, sailing, the sea, time zones, being set with diamonds and precious stones, after housing some of the most astonishing high-end complications, the J12 now takes a slice of the moon with the J12 Moonphase.

In the galaxy of horological complications, there is one that has a particular attraction, especially to women: the moon phase display. Symbolically associated with femininity, the moon phase is a horological complication with an eminently poetic reach. But its horological implementation is the result of savvy calculations that convert its particular cycle into the movements of wheels and gears. Its synodic revolution, in other words the interval of time it takes for the moon to return to the same position compared with the Sun and the Earth, is 29 days, 12 hours, 44 minutes and 2.8 seconds precisely. Since this interval is not the same as the average duration of a month, the watchmaker has to use the reduction of a gear train in order to display the different stages in the lunar cycle: new moon, first quarter, full moon, last quarter. 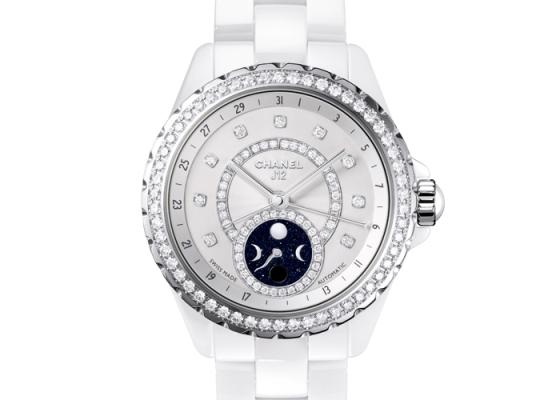 Traditionally, this is displayed on a small disc on which there is a full moon. This moon, revolving around its disc, alternately appears and disappears behind a window cut out in the dial (the shape of which often recalls that of a cloud), gradually revealing the progress of the lunar cycle.

The J12 Moonphase displays the moon phase in a completely different way. The four main stages in the lunar cycle are represented by small indicators – a white disc, two white crescents, a black disc – on a large, deep-blue aventurine disc that glitters like a starry sky. The moon phase is indicated by a slender serpentine hand in polished steel, which shows the interval between the different phases of the moon.

This poetic and dreamy moonphase indication, at 6 o’clock on the dial, gives a new look to the iconic J12. The large aventurine disc, framed by metal, is like a window on to the firmament. It is completed by another indication, that of the date, by a hand whose tip takes the form of a fine crescent moon as a subtle reminder of the astronomical consistency. This small crescent underlines the date, which is marked in figures on a scale on the flange around the dial.

At the centre, the hours, minutes and seconds follow their regular course, read against hour numerals in a deep blue. The seconds hand revolves around a fine railway-style minute track. All these indications stand out against an open dial background with alternating brushed and guilloché patterns in the finest horological tradition.

The new J12 Moonphase comes in a 38mm case in high-tech ceramic with a bracelet whose links, in the same ceramic, are fashioned and polished one by one and assembled in a taper to offer maximum suppleness and exceptional comfort on the wrist. This bracelet is easily adjusted using a triple folding clasp.

The first J12 Moonphase models are available in six different versions, from the most understated to the most ostentatious. They are all fitted with a high-quality self-winding mechanical movement with a power reserve of 42 hours. The most classic of these models is a sober piece in high-tech white ceramic with a brushed opaline dial and aventurine moonphase disc, water resistant to 100 metres. The more ornate second model in white has a bezel set with 54 diamonds (± 1.42 carats) and a guilloché opaline dial set with 63 diamonds (± 0.34 carats) that surround the aventurine disc, make up the minute scale and act as hour markers.

Two high jewellery models complete the range. The first is in 18-carat white gold and titanium ceramic in a limited edition of 12 pieces, with the bezel, lugs and exterior links on the bracelet set with 554 baguette cut diamonds (± 30.19 carats). The second is a sumptuous model in a limited edition of five pieces in 18-carat white gold that is fully paved with 696 baguette cut diamonds (± 42.45 carats). So that the exquisite hour may be even more so.