The new school of watchmaking owes a great deal to the Urwerk company, which has captured imaginations since 1997 with a string of pioneering creations. Urwerk has indeed appeared to break decisively from the conventional round dial with central hands by proposing innovative indications of the hours and minutes with revolving satellites. 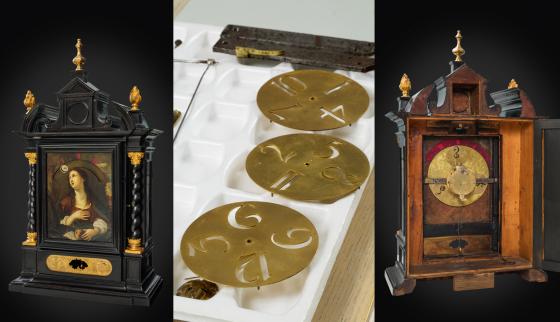 Although this style of watchmaking was immediately hailed as being at the forefront of modernity or even as decidedly futuristic, it is too easy to forget that it is in fact rooted in the past with its origins in 17th century. Urwerk’s watchmaking, however much apparently at odds with tradition, owes much to ancient watchmaking and more precisely to the Campani (or Campanus) brothers who, in 1682, presented Pope Innocent XI with a revolutionary night clock. The pope wanted to be able to tell the time at night without having to light a candle or a lamp. The innovation, signed Petrus Thomas Campanus inventor Romae 1682, consisted of an oil lamp placed inside a wooden clock case. The lamp lit up transparent hours numerals in rotating discs. The hour travelled along a semi-circular arc in an aperture in the dial, its position indicating the minutes. When the hour numeral disappeared on the right of the arc, the following hour rose on the left, imitating the passage of the sun from horizon to horizon.

The watchmakers of the 18th century took up his brilliant idea by developing a system of satellite hours known as wandering hours, which had their moment of glory in pocket-watches. In its usual configuration, the 12 hours are divided into three sets of four hours (1,4,7,10; 2,5,8,11; 3,6,9,12) appearing on three different discs. The hours follow one another in turn along an arc graduated in minutes. The system thus combines a digital display and an analogue indication in an intuitive way of telling the time.

A FORMAL AND TECHNICAL REINTERPRETATION

Urwerk reinterprets this principle in a radical and contemporary manner, adding sophistication and a level of technicality and precision that the wandering-hour watches could never achieve. The satellite system was first applied in the UR-103, launched in 2003, and “the first Urwerk watch that won the respect and understanding of the market” according to Felix Baumgartner, the watchmaking soul of Urwerk which he founded with the designer, Martin Frei. In the UR-103, the 12 hours are in groups of three, each on the satellites at the end of four arms of a central carrousel. As the carrousel goes around, the four satellites pass successively over four Maltese crosses that turn the satellites so as to display the right hour. The turning of the satellite in the UR-103 takes around five minutes and is hidden beneath a wide central strip that divides the dial.

“If the appearance of the satellite displaying the correct hour seems like technical magic, the force required by the rotation of the satellite is a specific action taking place every hour,” explains Felix Baumgartner. “Watchmakers, of course don’t like this temporary demand for extra energy since it results in a periodic loss of amplitude, which makes the mechanism more difficult to manage over the long term.”

Another tricky issue is that the central carrousel of the UR-103 turns on a tiny ball race in order to reduce friction. “However with time and the shocks that a watch on the wrist must endure during its existence, a certain amount of looseness can occur,” continues Felix Baumgartner. “We became aware of this through our after-sales service.”

These technical reasons and also the stylistic considerations that we describe below led Urwerk’s creators to come up with a new approach to the same satellite indications in the UR-105M (M for manual).

The new UR-105M lacks the central band that hides the change in the satellite’s position from view. Instead the dial is completely open, concealing nothing of the satellite ballet. This takes place progressively and in full view, eliminating the bursts of energy that are detrimental to the constant amplitude of the balance. The four satellites fashioned from aluminium for the sake of reducing weight are attached to a structure made of a biocompatible polymer called PEEK (polyether ether ketone) used in surgery. PEEK is very hard, hardwearing and light. It can be machined, needs no surface treatment and can be decorated almost as if it were a metal. 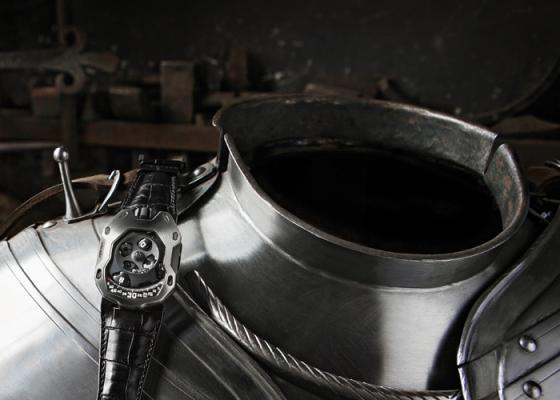 The carrousel protecting his structure in PEEK is no longer on ball bearings but on a long central shaft for precision, held by two jewels and a bolt that is visible in the centre of the watch. The aluminium satellites are coated with black diamond-like carbon (DLC). The entire construction is no longer held from on top as in the UR-103, but from beneath. The complex central component on which the four satellites are attached (see diagram opposite) is machined out of non-corrosive copper-nickel alloy (ARCAP) while the four Maltese crosses that turn the satellites are machined out of a self-lubricating bronze-beryllium alloy. The entire operation of this astonishing mechanism is progressive without recourse to an additional supply of energy. Setting the time brings the continuous motion of the satellites into play with appreciable elegance and exactitude. 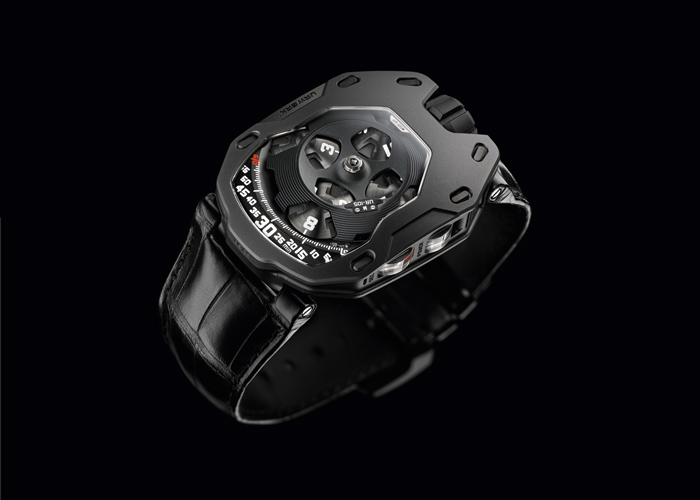 “Technical challenges are at the heart of our watchmaking, but the performance is elusive,” says Felix Baumgartner, “since it’s a matter of moving complex but very light structures with horological precision. The other challenge posed by the UR-105M is quite different,” he adds. “It involves the openworked small seconds hand that indicates 10-second periods on the bottom right of the dial, which has to be synchronised with another seconds hand that can be seen on the right side of the watch.” This lateral seconds indication on a red anodised aluminium cylinder is placed under a fitted lens. Next to it, also under a lens, is a horizontal power-reserve indicator. If you turn the watch over, you’ll find Urwerk’s characteristic control board as evidence of the company’s concern with precision timekeeping. It includes a 42-hour power-reserve indicator, which is more exact than the warning indicator on the side of the watch, a five-year gauge that tells the owner when it’s time to service the watch (humorously referred to as an oil-change indicator), as well as a fine-tuning screw to adjust the rate, with its scale in a small arched aperture.

A STEEL SHIELD ON A TITANIUM BODY

This delicate and effective satellite mechanism driven by a Zenith calibre is resolutely guarded by a tough and purposeful case topped by a big crown at 12 o’clock. The designer and Urwerk’s co-founder, Martin Frei, is well known for his Star Trek-inspired futuristic imagination. Less well known, however, is that another of his muses comes from the past — medieval armour. This extraordinary idea had already been seen in another Urwerk timepiece, the very complicated UR-110, but it takes a different dimension in the new watch. As Martin Frei points out, “the case of the UR-105M was entirely conceived as a suit of armour. The visible screws on the face of the watch, protected by covers, are not just stylistic features; they are there to hold a proper steel shield against the titanium body. The parallel with knightly armour is obvious to me: you have this force emanating from the armoured bezel that protects an ostensibly fragile mechanism from the violence of the outside world.” 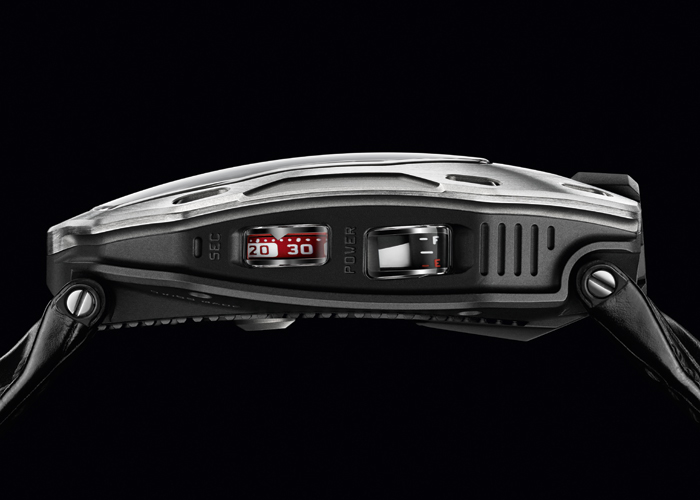 This analogy is not altogether obvious to those who can only spare a glance at a watch that seems more futuristic than medieval. But the potency and aptness of the inspiration become apparent if the watch and a suit of armour can be directly associated. Martin Frei therefore took Felix Baumgartner to see one of the remaining traditional armour-making families who are still at work in the Austrian alps. These heirs to a 600-year-old craft had just received an unusual order: to replace the 120 antique suits of armour worn by the Vatican’s Swiss Guard. Put side by side, the UR-105M and a traditional suit of armour reveal a remarkable formal and functional family resemblance. It therefore seems logical for the two versions of the UR-105M to be dubbed Iron Knight and Dark Knight. Both have titanium cases with shot-blasted steel bezels, but the former has a circular and vertical brushed finish while the latter has an aluminium titanium nitride (AlTiN) surface coating. The cases do not have screw-held backs because the movement is fitted from the top, but their taut lines mean hat they are complex to machine and to make water resistant, for there are nine openings and as many critical points in the cases. Just as the wandering hours are directly descended from a 17th century clock, the UR-105M is rooted in the old days of chivalry. Who would have guessed that the most decidedly avant-garde watchmaking would be so much inspired by age-old techniques and practices? 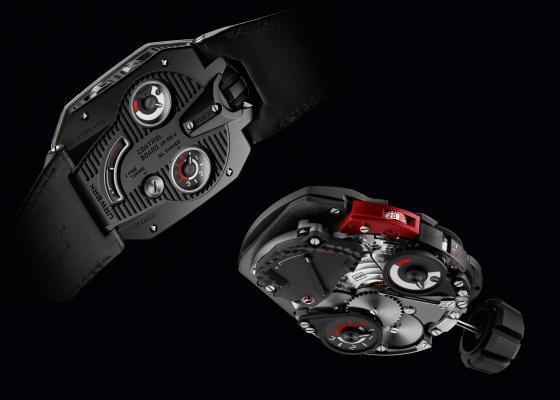 In fact it’s not surprising once you realise that Felix Baumgartner grew up in the workshops in Schaffhausen where his father restored antique clocks and watches, and that he had a close-up view of the fabulous mechanical interiors of many a venerable and historic clock. One can imagine the child fascinated by these scientific and mechanical playthings. This genuine and deep-seated horological culture is combined with the fantasies of Martin Frei, engendered not by watchmaking but by art schools. He is free to deploy its effects and inspirations beyond the watchmaking mould, giving Urwerk’s products a depth, originality and a liberty that are undoubtedly unique in their kind.