ALL EYES ON… CARL F. BUCHERER: The Golden Move


ALL EYES ON… CARL F. BUCHERER: The Golden Move

The Lucerne-based brand revitalises its whole identity under baroque symbolic, unveils a very promising family of new calibres and further strengthens its collections. The least we can say is that 2016 is not “business as usual”!

On the cover of this Baselworld issue of Europa Star, the Manero Peripheral is not just “any” new timepiece by Carl F. Bucherer. It is a landmark and a stepping stone for the family-owned brand managed by the dynamic Sascha Moeri (read interview on page 14). Just the tip of the iceberg, this new model is indeed the first to feature the new family of calibres CFB A2000, which will appear in future Haute Horlogerie models of the Lucernebased manufacture and open up a wide horizon. 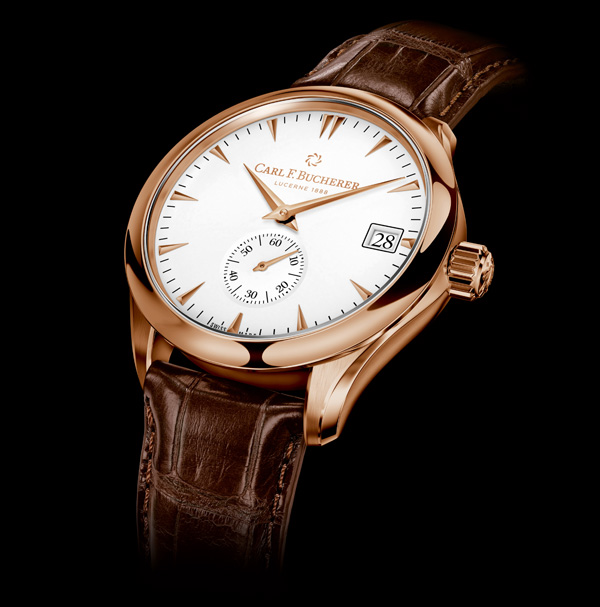 At the crossroads between the devotion to a sacred centurylong past in watchmaking and the desire to innovate in a radical way lies the heart and soul of Carl F. Bucherer. The CFB A2050 movement, which drives the Manero Peripheral, is one possible variant of the A2000, whose development took place over several years in secret on the manufacture grounds. In addition to its central hours and minutes hands, the new Manero displays the small seconds at 6 o’clock and the date at 3 o’clock. This new watch movement is housed in a classically designed, multifaceted round case. Visual intensity is created by clear edges, soft curves, and contrasting polished and matte surfaces. The dial is a Manero classic: elaborately finished with raised wedge hour-markers. And, as is usual for the series, the time is indicated by faceted lance hands. The Manero Peripheral, with a power reserve of 55 hours, is being launched in six versions: the 40 mm case is offered in rose gold or stainless steel, each with dials in deep matte black or elegant porcelain white. Each variant is complemented with a fine strap crafted from alligator leather. The stainless steel models are also available with a steel bracelet and refined double folding clasp. 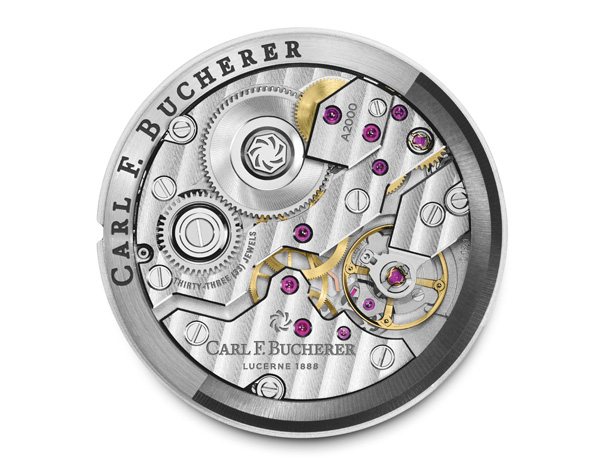 REVOLUTION IN THE ROTOR

Let us take a closer look at the new calibre series CFB A2000, which offers a glimpse of what the engineers’ imagination has in store, as it can be used in a variety of models and enables new combinations of features. This new movement draws its energy from a double-sided self-winding mechanism with a peripherally arranged rotor (hence the name of the new Manero model). Carl F. Bucherer was the first manufacturer to put this design principle into series production with the calibre CFB A1000, consequently adapting the construction design to the new movement series. With its linear design, it is characteristic of Carl F. Bucherer both from an aesthetic and technical viewpoint. The Geneva stripes adorning the movement’s bridges and balance-cocks are a tribute to Swiss watchmaking tradition.

In order to maintain consistently high accuracy, the watchmakers focused on a completely free breathing balance-spiral that undergoes no change in its effective length. The motion of the watch is calibrated exclusively using pivotable masselottes. These are small weights that sit on the four balance arms and control the inertia of the balance, which oscillates at 4 Hz or 28,800 vibrations per hour. This, in turn, guarantees the movement precise rate stability.

The CFB A2000 is a universally applicable movement. Its basic structure was designed so that it can be incorporated into even more future models including ladies’ watches. Because of its impressive rotation momentum, this automatic movement is destined to drive a wide range of additional functions under devlopment in the watchmaker’s own development workshops. Thus, this new movement is merely making its debut in the new Manero Peripheral.

One more thing, as the late Steve Jobs would say… So far, we have understood that the Manero Peripheral is not just “any” new timepiece, due to its innovative movement, setting up for future promises. Similarly, the timing of the movement’s release has been carefully calculated. Carl F. Bucherer has chosen to seize this opportunity to put itself into motion and refine its whole brand identity.

At this Baselworld edition, the traditional Swiss manufacturer presents a distinctly golden evolutionary look, paying tribute both to the heritage and personality of Carl F. Bucherer and to the baroque influences in architecture that mark the brand’s hometown, Lucerne. An approach meant to be lavish and discreet at the same time.“Carl F. Bucherer has a very distinct heritage that sets us apart from other brands. With this evolutionary look we are reshaping these roots for the future,” states Sascha Moeri. “The root of all is the personality of Carl F. Bucherer, a visionary and bold entrepreneur. His artistic talent and pioneering spirit laid the groundwork for what the brand represents today: an authentic brand that is deeply rooted in the cosmopolitan and exuberant spirit of Lucerne.” 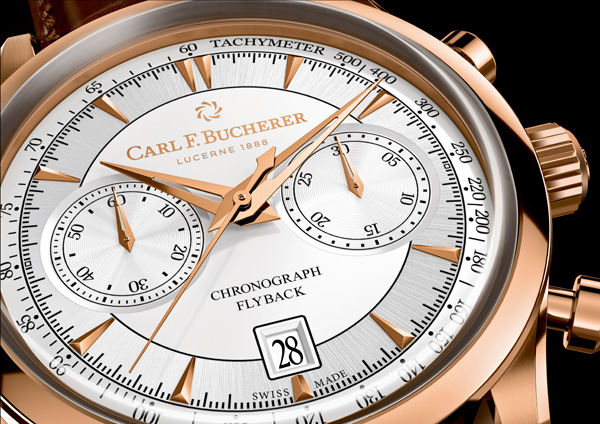 Carl F. Bucherer also comes to Baselworld with a series of novelties in almost all of its collections. Beyond the new Peripheral, the brand introduces the Manero Flyback. The chronograph newcomer for 2016 features the calibre CFB 1970, which is controlled by a gearwheel and also provides a flyback function, allowing multiple time intervals to be measured in quick succession. The automatic chronograph movement is housed inside a classic round case, 43 mm in diameter, and is available in rose gold or stainless steel, perfectly complementing the elegant Manero series. The polished push buttons controlling the chronograph function not only emphasise the classic character of the watch, they are also highly functional with their large surface area. The two sub-dials for the small seconds at 9 o’clock and the stop minute at 3 o’clock are recessed and combine with the surrounding raised border adorned with a tachymeter scale to underline the three-dimensional quality of the dial design. Another sporty watch is the GMT chronograph Patravi TravelTec Black, in deep matt black, distinguished by its three time zones and a robust DLC coating. The main feature of the watch is of course its imposing black colour, which emphasises the diamond-like-carbon finish on the stainless steel case and wristband. The striking design is rounded off with a black dial offering a clear display of contrasting light- coloured counters, indices, and scales. Two time zones are visible on the dial. The third time zone is displayed via a red 24 hour-hand on a rotating bezel.

In the same family, the Patravi TravelTec II, which was presented last year, now gleams in rose gold and blackened titanium. The highly vibrant color combination between the case in warm rose gold and a case back and pushers in lightweight titanium is rounded off by a black dial and a black strap. Measuring 47.4 mm in diameter, the enormous rose gold case has a bold presence… The chronograph function in combination with three time zones, a specialty of the TravelTec family, is integrated into the case and can be seen through a lateral viewing window. The pusher at 10 o’clock adjusts the rotating bezel with a 24- hour scale beneath the sapphire crystal: depending on whether the wearer is travelling west or east, the 24-hour ring can be moved forward or backward in one-hour steps. When passing midnight, the date also changes both forward and backward. The second time is indicated by the 24-hour hand and the fixed outer bezel, while the third combines the 24-hour hand with the rotating bezel mentioned above. The 24 time zones and associated reference cities are engraved on the base, with Lucerne, the hometown of Carl F. Bucherer, representing Central European Time (CET). Last but not least in the same collection, the Patravi ScubaTec model is as of now available in a 36 mm case. Contrary to the black colour trend that is incarnated in the Patravi TravelTecs, this model is dressed entirely in white. A white rubber strap complements the white dial and white ceramic bezel; a more discreet, slender stainless steel bracelet is also available. Despite its slim look, the watch’s robust stainless steel case can withstand pressures to a depth of 200 m.

The new Patravi ScubaTec illustrates its connection with the ocean through the wave pattern adorning its dial. The twelve raised hour-markers, all three hands, and the 12 o’clock marker on the bezel are all coated with Super-LumiNova. The watch is equipped with the automatic CFB 1950 movement. The rotating dive ring in stainless steel indicates dive and decompression times. For safety reasons, it can only be turned counter-clockwise, ensuring the wearer knows when it’s time to surface. 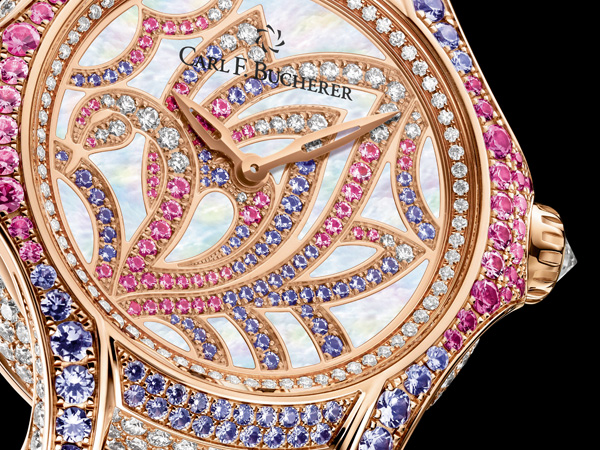 THE SWAN, SYMBOL OF LUCERNE

Also a ladies’ watch, but linked to a lake (or rivers of diamonds) rather than oceans, the Pathos Swan showcases the watchmaker’s long expertise in creating haute joaillerie watches. Precisely 922 diamonds and sapphires adorn the case, dial and strap of this sophisticated ladies’ watch.

Many cultures regard the swan as a symbol of purity, elegance, love, and beauty, and it is also emblematic of Lucerne and its eponymous lake. Above a mother-of-pearl dial, top Wesselton quality diamonds and sapphires in various blue tones combine to suggest the image of a swan gliding gracefully over water. The many facets of the curved case are elegantly expressed by the gemstone border that follows the shape of the timepiece.

This exclusive watch in the Pathos line (a collection which was launched in 2014) is available in two variants. In one of them, the watchstrap and the folding clasp are made entirely from 18-karat rose gold. The second variant offers a combination of white and rose gold, both of which are 18 karat. Both variants are produced in a limited edition of 88 pieces and are manufactured exclusively upon request. 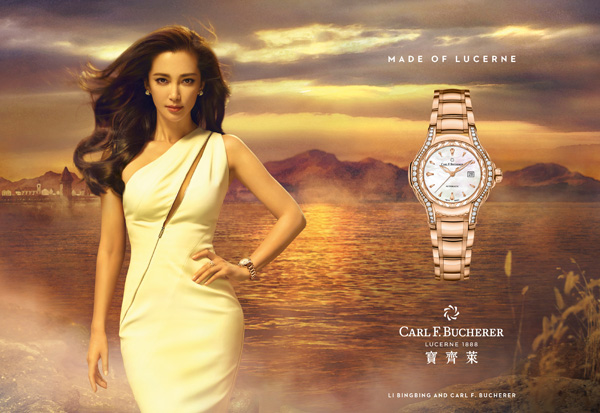 The Chinese actress and singer is the new global “face” of Carl F. Bucherer. A way for the brand to reinforce its message in Greater China but also in the rest of the world. Indeed, Li Bingbing is one of the biggest movie stars in China and has also set foot in Hollywood, where she has played in blockbusters such as Transformers or Resident Evil. Perhaps even more interestingly for the brand, she is very active on social media and Carl F. Bucherer can reasonably count on her influence over millions of followers… 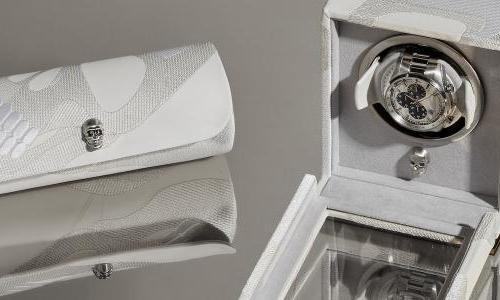 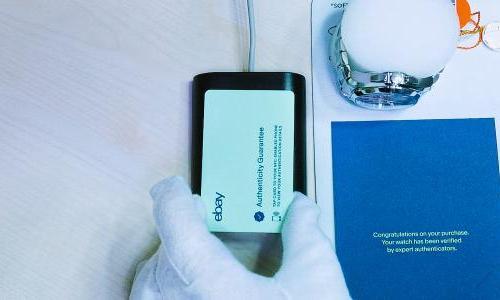 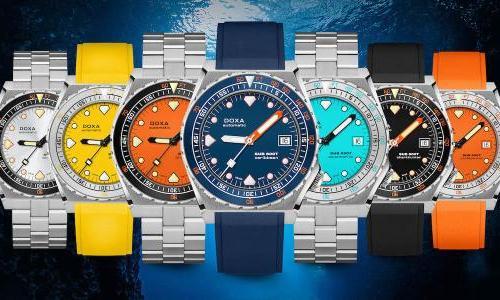 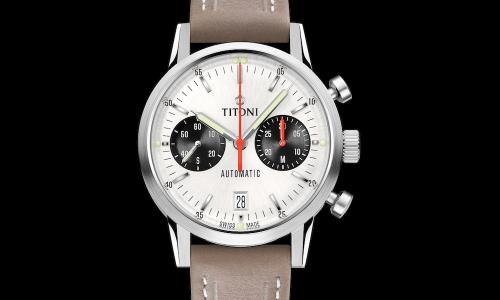