[email protected] - If you can’t fix it, Brexit


[email protected] - If you can’t fix it, Brexit

Friday, June 24, 2016, the morning after 17,410,742 Britons voted to leave the EU, the ferry I was on from Guernsey docked in Poole, Dorset in the south of England. There were no flags or bunting; peace and serenity reigned. And yet the newspapers, television pundits, economists and the so-called political specialists had proclaimed that a ’leave’ vote would immediately see the sceptred isle sink below economic waves of tsunamic proportions. But it was low tide in Poole and drowning was as likely as finding a Coca Cola vending machine in the middle of the Sahara. 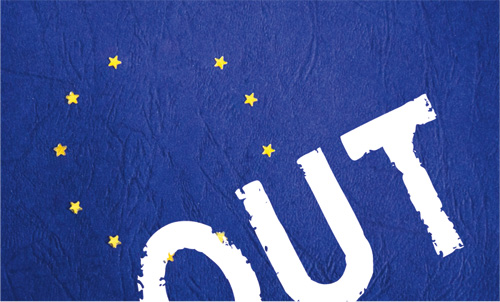 In the farcical run-up to the Brexit referendum the British government had miscalculated their use of bullying tactics by plucking fictitious financial figures from the air that suggested everyone would lose vast sums of money, viable companies would become insolvent, banks would go bankrupt and millions of people would be instantly out of work.

David Cameron, the then prime minister, saw himself as invulnerable because of the margin of his win in last year’s general election, but his bully-boy philosophy of frightening voters combined with his failure to obtain concessions from Brussels and his ill-judged timing for a Brexit referendum meant he blew it, he shot himself in the foot and consequently got his comeuppance. He has since resigned, leaving someone else to sort out the mess whilst he looks destined for the lucrative afterdinner speech circuit whereby he explains why everyone but himself got it wrong.

Having lived longer on this side of La Manche as opposed to the UK side of the English Channel, I consider myself European with a British passport and a Swiss Permit C yet I couldn’t help feeling that a Brexit vote was ultimately inevitable. Britain joined the European Economic Community, or the Common Market as it was called in 1973, when it accounted for 36 per cent of the world economy as opposed to today’s 17 per cent. Back then the EU concept was all about it being a market. But the ensuing years saw it become a political force that now legislates for its members, thus relieving them of any semblance of independence. Brussels now decides the size, shape and contents of a Bratwurst and the acceptable curvature of a banana, what farmers should grow and when, but more importantly, it has slowly acquired the fixtures and fittings of a nation: there is a president, a foreign minister, citizenship and a passport, its own currency, a criminal justice system, a written constitution, a flag and a national anthem, and it is these dictatorial trappings that the British people have reacted against along with that burning topic of topics, the imposition of quotas of millions of refugees. Don’t get me wrong, I’m not suggesting we should ignore the plight of the thousands of genuine refugees from war-torn countries, but I am suggesting that the 75 per cent of the so-called migrants who have jumped on the bandwagon for purely economic reasons and receive housing, food, medical care and even pocket money ahead of the tax-paying European nationals who have their own problems, should be treated differently. I don’t have the answer to that particular conundrum, if I did I’d probably be shuffling paper in Brussels.

However, the all-important question is will Brexit be a total disaster for the UK? I think not. Before the UK abandons the EU there will be lengthy negotiations, but the day the UK officially leaves is the day it becomes the EU’s single largest export market. Of course trading will continue, can you see Germany refusing to export cars to the UK or the French rejecting overtures for their wine and cheeses? No way!

The good news for UK-bound travellers is that they will see more pounds Sterling for their money as the currency has dropped in value against the Swiss franc and the Euro thus making purchases there very interesting – as my replacement Breitling watch confirms.

Out of interest, the Brexit referendum is not legally binding: the elected members of the British Parliament could decide to ignore the will of the people and vote against it. Unlikely yes, but theoretically possible. Personally I believe that the UK will prosper out of the EU and will rediscover its originality as a nation again, with the continued benefits of imported European cuisine.

You don’t have to laugh, a smile will do.