The necessary restructuring of strengths imposed by the new architecture of the international watch market is favouring the birth of new ‘mini-groups’. Some have positioned themselves at the upper end, others near the lower end of the product spectrum. The Jacques Bénédict – TimeForce mini-group, with the Givenchy brand at its core, is positioned definitely in the centre of the range, whether traditional, sport or fashion. This centrist positioning has been confirmed by the recent acquisition of the traditional Swiss brand, Favre Leuba. 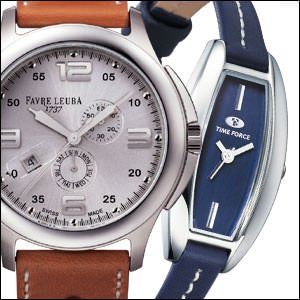 The necessary restructuring of strengths imposed by the new architecture of the international watch market is favouring the birth of new ‘mini-groups’. Some have positioned themselves at the upper end, others near the lower end of the product spectrum. The Jacques Bénédict – TimeForce mini-group, with the Givenchy brand at its core, is positioned definitely in the centre of the range, whether traditional, sport or fashion. This centrist positioning has been confirmed by the recent acquisition of the traditional Swiss brand, Favre Leuba.

The French company Jacques Bénédict has held the license for Givenchy watches for many years. In fact it will be a quarter of a century in 2007. It purchased the Time Force brand in 2000, but in 2002, sold it to a Spanish firm, Valentin, a maker of specialized gold cases that wanted to begin distributing watches in Spain and some Latin American countries. According to the conditions of the sale, Valentin returned the exclusive world license for production and sales of Time Force watches to Jacques Bénédict.

Birth of a group
This somewhat surprising formula perfectly suits the two new partners. It gives Valentin its desired opening into the watch market and it affords Jacques Bénédict the possibility of extending its activities based on this new license. The operation was repeated the following year, in March of 2003, with Valentin’s acquisition of Favre Leuba from LVMH. (Favre Leuba was earlier part of Benedom along with Dior that was acquired by LVMH.) At the same time that Valentin bought Favre Leuba, Jacques Bénédict purchased its stock of watches and was granted the license for production and distribution for a period of 20 years.
With these two transactions, Jacques Bénédict therefore became a ‘group’ with four major brands (Givenchy, Favre Leuba, Time Force and Smalto) and two well-known local brands (Renoma in France and MCM in Germany).
“For a long time, we have been looking for a traditional brand,” explains Jacques Fontaine, one of the two managers at Jacques Bénédict. “A large number of our distributors around the world have regularly indicated their desire to have their offer completed by something in the traditional sector. This demand has become rather pressing lately in view of the large groups that have tightened up on their distribution. Suddenly, now, many retailers are in a position of losing their classic brands. We have to seize this opportunity.”

Distribution’s new needs
Favre Leuba perfectly fulfils the role of a centrist brand. It is endowed with important watchmaking legitimacy since it was founded in 1737 and it is the second oldest Swiss brand, after Blancpain, which dates back to 1735. It has had its difficulties, notably during the crises of the 1970s and 1980s, but it is only ‘sleeping’ and not ‘lifeless’ as Jacques Fontaine smilingly explains. “When, one month after its acquisition, we presented the first elements of our new collection at Basel 2003,” he adds, “we were frankly surprised by the reputation enjoyed by the name Favre Leuba with many distributors. This professional recognition is a considerable advantage that will allow us to surmount the first obstacle between the brand and the consumer. The name is also known to parts of the general public, although, we must admit, it is a public aged more than 60 years old. Revitalizing and rejuvenating the brand is therefore our priority,” he concludes.

Rejuvenating the collections
The first elements in the process of rejuvenation are in place. The collections have been divided into three principal segments: two classic lines and a more ‘trendy’ line. The basic line, called ‘Millésime’ is proposed in a price range of euros 520 to 1495. It is a form watch, traditional but redesigned according to the canons of the most contemporary style. Available with a leather strap or steel bracelet, it is equipped with quartz movements or, beginning this year, with an automatic mechanical calibre. Some models are set with diamonds while a chronograph line completes the offer.
The Kolossos is another classic collection but with pure and round lines, reminiscent of the brand’s original models. Offered in three sizes, on leather or steel bracelets, equipped with quartz movements, it is priced between euros 390 and 585. Finally the ‘rupture’ and the ‘trendy’ versions are incarnated by the Giraglia line, a large round piece with simple models such as Day/ Date or a chronograph on leather or metal bracelets. It sells for between euros 390 and 1365.
Favre Leuba’s total production is, of course, Swiss Made and is fabricated at the assembly ateliers in the Tessin section of Switzerland, where the group owns a share of activity. According to the words of Jacques Fontaine, the current phase of the brand’s re-launch is “delicate to negotiate.”
Favre Leuba has historically been positioned relatively high or relatively low in the marketplace depending on the country, so now the group finds itself faced with a number of contradictory positions. The slight move upmarket in price has been more or less well absorbed. It is supported by a communication campaign based on the binary concepts of ‘Time/Value’, where ‘Value’ comes from the traditional aspect of the product and ‘Time’ is free, personalized and valued. Basel 2004 represents a sort of test for this re-introduction. The brand must see a confirmation of its efforts before it can move ahead into the international arena.

The sports dimension: Time Force
Time Force, launched some ten years ago, is based strongly on the sports watch. It is a “mass offer with a brand policy,” according to Fontaine. Already present in more than forty nations, it has relatively low prices, ranging from euros 100 to 160. It is well established in Europe, with strong distribution in Italy, Spain, Germany, Greece and Portugal as well as in South America. The group sees Time Force as a bridge to reach new markets.

Givenchy at the heart
The heart of the group’s historic activity is, and will remain, Givenchy. The 23 years of experience of this watch license, one of the very first in the fashion sector, offers the group unique expertise in this domain. “I am watching, from a certain distance, the current influx into the fashion watch sector,” explains Fontaine with a dose of irony in his voice. “Now,” he adds, “is the time of reckoning. How can a consumer choose when he sees the grand names in the fashion world proposing low-level watch products, while unknown brands are moving upwardsı It is total chaos. Givenchy is offering entry level products, while others are set with diamonds, but we remain essentially positioned at the centre of the continuum. We have been here since 1982 and, during this time, the landscape around us has been totally transformed. Yet, we are remaining in our same segment. We consider ourselves as one of the rare institutions operating here. We are also aware that the future will bring highs and lows to the brand as has always been the case in the past, but our experience tells us to continue straight along our chosen road.
Givenchy is a style in itself. We are continuously working on the details while staying true to the spirit of the brand. Moreover, I am convinced that in this sector, as in others, we are going to see a shift in positions and a return to real values.”
Well, we all have a rendezvous at Basel 2004 to see first-hand the complementary offerings of this new watch mini-group.