The 3 Volution of Antoine Preziuso, the ultimate tourbillon


We thought we had seen it all in the domain of the tourbillon. But the 3 Volution by Antoine Preziuso changed all that.

The 3 Volution of Antoine Preziuso, the ultimate tourbillon

We thought we had seen it all in the domain of the tourbillon. But the 3 Volution by Antoine Preziuso changed all that.

There have been so many tourbillons over the last few years that we believed all, or nearly all, had been seen. There is the Gyro-tourbillon from Jaeger-LeCoultre, the double and triple axes by Thomas Prescher and even the surprising ‘orbital tourbillon’ launched recently by a new brand, Jean Dunand (cf. ES 5.05), not to mention the Quadruple Tourbillon à Différentiel announced by Greubel Forsey.
But then along came Antoine Preziuso.
This creative master watchmaker, who has sometimes been criticized for not having developed his own calibre but working essentially with existing ones, has just shown, and oh how brilliantly, another example of his talent. This new surprise is called the 3 Volution.
Antoine Preziuso says the idea came to him while watching a children’s amusement park ride - the kind where the teacups rotate on their own axis while turning with the unit - a sort of double rotational movement, if you will.
In the 3 Volution, the teacups are replaced by three flying tourbillons. Each of these tourbillons makes one compete rotation around its axis in one minute, while at the same time, all three are attached to a plate, which revolves in 2 minutes and 15 seconds. The effect is magical. 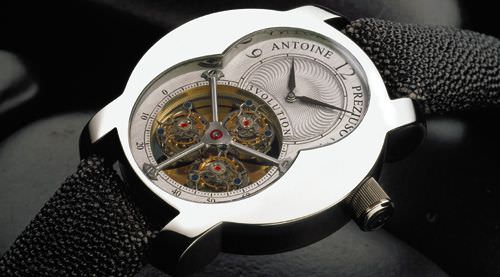 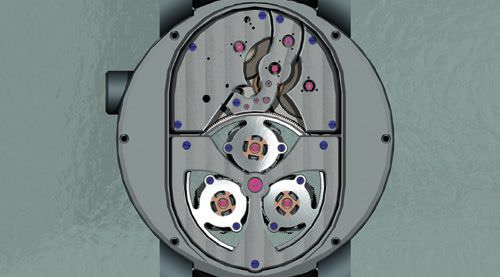 Visually enchanting
Visually, the sight of these three tourbillons rotating on their own axis and then moving together in a circle, is simply splendid. We have the impression – after seeing the existing prototype – that we are watching an incredibly graceful aerial ballet. The watch becomes truly alive, animated by the organic choreography of the small cages and their double movements.
But, beyond the lovely sight, the 3 Volution is a true technical feat that represents a new page in the rich history of mechanical timekeeping. And, incidentally, it accomplishes what Breguet had invented for pocket watches that are worn vertically, that is, total freedom from the influences of gravity, thanks to the phenomenon of resonance! Talk about superior chronometry!

Resonating success
As for all amazing inventions, the 3 Volution seems simple, yet is anything but. Starting with his original idea, Antoine Preziuso wanted to create a circular relationship between several tourbillons. Along the way, he was surprised to discover the effect of resonance. When he placed three movements, one on top of the other, onto a vibrograph (apparatus to control the movement’s operation), Preziuso discovered that in less than a second, all three resonated together, emitting only one frequency that became the average of the three. In other words, the movements were self-regulating. In addition, each of the resonating oscillators saw its amplitude increase significantly.

Chronometry for tourbillons
Until now, in wristwatches, the resonance phenomenon had only been used by François-Paul Journe in his Resonance Chronometer. In Journe’s piece, the balance is mobile in order to find the exact point where the two movements enter into resonance. Fascinating in itself, this resonance is the same thing that happens when a military troop crosses a bridge marching to the same cadence. The frequencies generated by the soldiers' steps begin to resonate, thus making the bridge oscillate, and can even destroy it.
“I never thought about it,” candidly admits Antoine Preziuso. In the 3 Volution, the average frequency, stable and nearly imperturbable, generated by the three tourbillons contributes to better regulation and therefore to better operation of the watch. “My goal,” says Preziuso, “is to create chronometry with this watch.”
It is this same resonance effect that gives Preziuso hope for his tourbillon. As we know, a tourbillon is designed to compensate for the effects of gravity on the precise operation of a watch kept in a vertical position (in other words, a pocket watch in a vest pocket). However, as Preziuso has shown, resonance can also provide for much better regulation and a degree of ‘unequalled’ precision also in the horizontal position.

An entirely new calibre
Totally developed in the ateliers of Antoine Preziuso, this new calibre presents a very particular architecture. The manual winding arms a double barrel, for an optimal performance and a good power reserve (72 hours minimum). The gear train pulls a pierced circular ‘plate’ that carries the three tourbillons, which rotate in one minute. Placed equidistant from the centre of the plate, their axes form an equilateral triangle. The plate makes one revolution in an anti-clockwise direction in 2 minutes and 15 seconds. This double revolution, accelerating the speed of rotation of the tourbillons, also contributes to a better precision. The resonance phenomenon is activated by the edge of the plate’s circumference, which acts as a sound box. The respective frequencies of the three regulating organs synchronize with each other simultaneously.

To be continued…
Antoine Preziuso is especially proud of his realization. “It is the achievement of a team,” he quickly adds. He looked to other domains and called on people such as the constructor, Stéphane Robert, who comes from the world of micro-mechanics and earlier designed computer-controlled machines. Many of the parts were made by small mechanical ateliers in the region. His talented team succeeded in creating an entirely new calibre and making a prototype in six months.
“And this is only the beginning,” he says. Potential developments and different possible applications are major and promising. A patent has been applied for that protects the essential of the TTR 3, (for Triple Tourbillon Résonance 3) as Antoine Preziuso calls his calibre.
The watch can be seen during the ‘4th Event,’ the exhibition that Antoine Preziuso is organizing in his ateliers at Arare, near Geneva, from April 5 to 9, 2005. We can safely say that the
3 Volution will be the talking piece of the next watch shows.