Chaumet - from past to present


Chaumet - from past to present

Chaumet’s history is as magical as its illustrious creations. Founded in 1780, the brand has crafted jewellery and timepieces for some of the world’s most influential people, from France’s NapolÉon Bonaparte to Queen Marie-Antoinette, from Britain’s Queen Victoria to the Maharajahs of India. The Chaumet archives trace another angle of a world history that reveals the artistic tastes and desires of world leaders through time. Order books, photos and a museum of historical objects open up an enchanting world of luxury from the past.
During a recent visit to the brand’s head-quarters in Paris’ famous square on the Place VendÔme, I was privileged to discover this historical brand in its private mansion where the Polish composer FrÉdÉric Chopin played and composed during the last months of his life, no less. The brand is extremely proud of its history, but also proud of its present. In a room surrounded by 150 models of the brand’s famous tiaras, I discovered the latest creations from Chaumet that are continuing the artistry of this legendary brand. 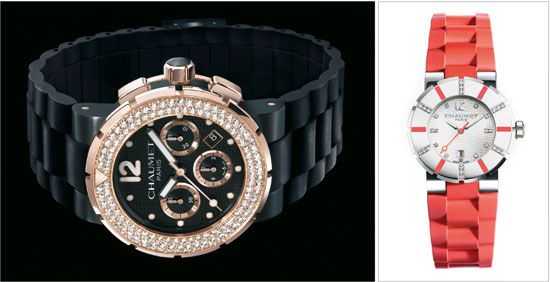 CLASS ONE BLACK TIE and CORAL CLASS ONE


Although Chaumet is probably better known for its jewellery, watches have always been among its works of art and more so now than ever. It has been ten years since the company launched its Class One timepiece collection, a watch that was to be a complete rupture from the Parisian luxury ‘label’. It was not only the first diving watch from the Place VendÔme, but it was crafted using a daring mix of steel, diamonds and rubber, something that was a rare thing back in 1998. It was a bold de-cision, but one that paid off as the collection is one of the brand’s bestsellers.
This year is the tenth anniversary of the Class One and Chaumet is presenting three exclusive models: an XXL automatic chronograph, a Coral Class One and a Black Tie Class One. Subtle, but important changes, are to be found in these new models with relooked dials, bezels, casbacks and bracelets. This year also sees the launch of a limited edition enamel collection that will be launched later in the year.
For a brand that has dressed two centuries of aristocracy the world over, its creations are now more accessible than they have ever been. As the company expands into new territories, notably in Asia and the United States, this is certainly a brand to watch.