“We talk about mathematics and physics, but also about vibratory mechanics, tribology…”
Europa Star wanted to return in more detail to the Mikrotimer Flying 1000 Concept Chronograph that was presented this spring at BaselWorld. To do so, we met with Guy Semon, head of R&D at TAG Heuer.

“We talk about mathematics and physics, but also about vibratory mechanics, tribology…”
Europa Star wanted to return in more detail to the Mikrotimer Flying 1000 Concept Chronograph that was presented this spring at BaselWorld. To do so, we met with Guy Semon, head of R&D at TAG Heuer.

Europa Star: Without going into detail on the long history of TAG Heuer and its chronographs [see the sidebar], tell us how the idea—at first glance a little crazy—to create the first mechanical chronograph capable of counting a 1000th of a second came about?

Guy Semon: On my arrival three years ago, we launched the production of the chronograph 1887. But we wanted to push the limits further. Among the existing chronographs, the El Primero was the fastest, with its 36,000 vibrations per hour. We then asked ourselves what we could improve upon. The COSC, which bases its measurements on the second hand, does not certify the chronograph itself but rather the entire watch. Now, when one “connects” a chronograph to a watch, it draws energy and automatically reduces the precision of the watch, notably the coupling, whether this is by an oscillating or vertical pinion. The chronograph and the watch are therefore accepting cohabitation more or less well. The idea then came to separate the watch and the chronograph in an integrated movement by creating two distinct chains, each possessing its own regulating organ and its own source of energy, thus opening the way to a double certification. The different chains also had the advantage of being able to have the energy adapted to the function thanks to specifically designed barrels.
This approach was used for the first time in the Heuer Carrera Mikrograph chronograph, the first mechanical chronograph wristwatch with an integrated column wheel equipped with a central foudroyante hand and offering a precision of 1/100th of a second. It had two assortments oscillating at 28,800 and 360,000 vibrations per hour, or in other words, 5 Hz for the watch and 50 Hz for the chronograph, with a 90-minute working reserve.

G.S.: We now are entering, of course, into the domains of mathematics and physics, but also the domains of vibratory mechanics, tribology, etc. All of this becomes very advanced. The “watch” part rotates at 28,800 vibrations per hour and is equipped with the index-assembly of the Monaco V4, with a smaller balance spring and a smaller balance, but with normal pallets and pallets wheel. For the chronograph, the patented launch hub break system commanded by the column wheel was perfectly adapted to 50 Hz, but the question then was how to go up to 500 Hz?
Traditionally, the balance is there to move the spring back to its initial position but when you reach very high frequencies, the spring must be so rigid that there is practically no need of the balance to make this return. We used a spring with only four coils, about ten times more rigid than a normal spring, which allowed us to forego the balance for the first time in the history of timekeeping. But, it was necessary that the volume of the mass be the smallest possible, and that the central axis be the lightest possible [the inertia is calculated by the weight times the square of the radius]. This axis is therefore made in a particular material, an alloy of aluminium, titanium, and magnesium. Another important point—the pallets must also be the lightest possible. Normally, we use jewelled pallets against the friction, pallets that allow for adjustment. But today, we are able to make mono-block pallets. The physical contact is made at only one point. Instead of sliding, the pallets rebound to the pallets wheel. This intermittent liaison of the pallets and the pallets wheel generates, in return, a hyper-velocity impulse.

ES: How is this system activated?

G.S.: Not being able to use the self-activated traditional balance/balance spring couple, we developed a system that we called “Launcher-Hub-Brake System”, controlled by the column wheel that takes advantage of the rigidity of the balance spring. In the START position, the launcher is activated, following a tangential movement, by a solid contact with the hub of the radial escapement. In the STOP position, the launcher pushes against the hub, which instantaneously stops the movement of the balance spring.

G.S.: At these speeds, you can imagine the problems of liquid lubrication… We have thus worked on solid lubrication, in other words, working on the states of the surface by using combinations of materials whose coefficient of friction is the smallest possible. 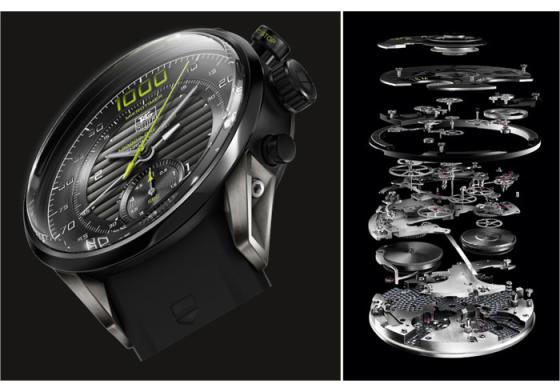 ES: What about another obstacle, that of generated vibrations?

G.S.: Ah yes, everything vibrates in all directions. These vibrations vary according to the materials, which also enter into resonance. It was necessary to seriously study vibratory mechanics. In this way, for example, the central yellow hand of the chronograph, which makes ten rotations per second, must absolutely not enter into frequency resonance with the rest of the movable parts. It is made of titanium. Everything has been calculated in accordance with the vibratory modes of the different ma-terials and certification is made by a fast camera coupled to an atomic clock.

ES: At this speed, the energy used must be enormous. What then is the working reserve of the chronograph?

G.S.: For the moment, we are at 2 minutes and 30 seconds. But don’t forget that the Mikrotimer Flying 1000 is still only a concept watch and that we will continue our research. We have already reached an accuracy that is 125 times greater than the best mechanical chronographs on the market today, and ten times superior to our own Mikrograph at 100th of a second. We do, however, have to ensure accuracy and reliability over the long term. We have 11 patents pending, notably for: the absence of a balance; a high-frequency balance spring developed in collaboration with Atokalpa; the intermittent contact of the pallets and pallets wheel; and the Launcher-Hub-Brake System. We also have patents pending related to the display of the time.
Despite the fact that the central hand makes ten rotations per second, we can easily read the thousands and hundreds on a scale located on the external part of the dial. A second central hand indicates the minutes and the 1/12ths of a minute on a scale marked with 150 seconds. The number of our demands for a patent gives you a good idea of the complexity of this piece. It is a grand complication of a whole new type, which is closely in line with our history and our legitimacy.