It is often said that a ‘revelation’ happens suddenly, like a bolt of lightning. Sometimes, however, ‘revelations’ take their own sweet time. This is the case of Revelation, the brand, founded by Anouk Danthe and Olivier Leu. The two met in 1991 at the Art Centre College of Design in La Tour-de-Peilz, on the shores of the Lac Léman, not far from Montreux. At first, the two founders had totally different careers. Anouk Danthe, passionate for watches right from the start, worked at Jaeger-LeCoultre on the Atmos clocks, at Omega on the Constellations and the DeVilles, and then for a long time at Audemars Piguet. At AP, she was Product Manager during the launch of the Royal Oak Concept, where she worked alongside Giulio Papi. As for Olivier Leu, he worked at Jörg Hysek before creating his own company specializing in design-focused environments ‘surrounding the watch’, such as displays, boutiques, accessories, and so forth.
In 2006, the pair decided to move to the next step and create their own brand. Their initial concept came to fruition after a detailed analysis of the market at the time, which seemed dominated, at least from a media point of view, by many newcomers and independents that were competing with each other in a sort of technical one-upmanship. While their results were certainly spectacular, their new timepieces often had difficulties in reading the time.
Wanting to combine ‘the best of both worlds’, in other words, technical prowess and good readability, Danthe and Leu developed an original concept that would provide the name of the brand: Revelation. Their idea was to combine two possible visions of the same watch: an apparently simple dial that, when manipulated, would reveal the complex movement that drives the piece. To achieve this, they looked at techniques involving polarized filters. The solution was to place one polarized disc on top of another. When combined, the two discs gave the impression of a totally opaque surface. One disc was stationary but the other was able to pivot 90°, so when it rotated and aligned itself with the fixed glass, the light could pass through, thus ‘revealing’ what was hidden below. 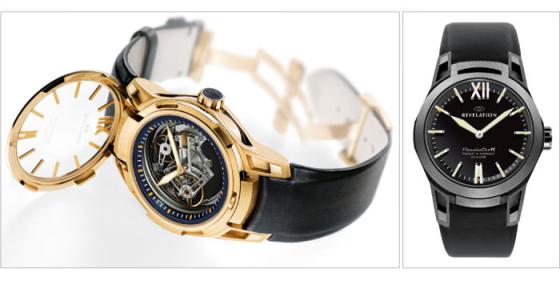 The case: a complication in itself
Armed with this innovative concept, the couple created their own company at the beginning of 2007. With the aide of a technical bureau, they developed the ‘Revelation System’. The principle involves pivoting a polarizing disc by raising the bezel of the watch using an Archimedes screw. The screw is coupled to a differential gear, which drives the crystal inside a ring. In this way, the vertical movement of the bezel opening is transformed into a rotational movement. It is not hard to imagine the extreme complexity of the case that they had to construct. The case is “a complication in itself”, as they say, and is composed of 71 elements, all individually CNC-machined from a kilo and a half of gold, giving a final weight of 154 grammes. One important point is that the movement itself had to be designed in close coordination with this case. Unlike most, the Revelation case has very special kinetic functions.

See the Revelation movement in action in this video:

The tourbillon manège
The movement, in fact, is where the way became more problematical and longer that they would have imagined. Their first supplier (BNB) announced, out of the blue, that it would not produce the basic movement that they needed to develop their complication. They then had to find a new supplier capable of providing a basic movement with the same exact dimensions required by their complex case. This was entrusted to a technical bureau, but alas, after a year, the results were disappointing: the energy output of the proposed calibre was not enough to correctly drive their complication—a ‘tourbillon manège’ in which the balance, pallet lever, wheel and escape pinion are mounted on a moving arm, which serves as the tourbillon bridge. This mobile bridge, balanced by a gold counterweight, is sandwiched between two wheels mounted on the central axis. It acts as the fourth wheel and is driven by four barrels connected in series. Clearly, this is a highly complex achievement.
Starting again at zero, the two creators gathered together a task force composed of outside specialists and consultants who worked together to realize an escapement system, gear trains, barrels, and energy distribution system. And, today, they have reached the end of their long ordeal. Everything has been duly validated and properly tested, and the first 15 movements, integrally supplied, are in the assembly stage. Revelation finally exists.

A watch with a secret
The result is quite amazing. At first glance, we have the impression of seeing a watch with a classical appearance, slightly vintage, with a few touches of modernity in the design of the horns (which are nicely integrated into the strap). The readability is perfect with the bold hour markers standing out as if floating above the intensely black dial. But when you activate the very discreet trigger integrated into the case, the bezel and its glass cover on which the hour markers are attached rises up. This vertical movement drives, without being obvious, the 90° rotation of the two polarizing discs, thus revealing the previously hidden and remarkable Tourbillon Manège below. The effect is quite magical and most surprising.
(Note that this polarization is carried out by rotating a cover in the case, but we might well imagine other systems that could produce the same effect, for example, by a rotating bezel or another idea still in Revelation’s playbook.) For Anouk Danthe and Olivier Leu, this is the beginning of an incredible adventure. But have they already accomplished the most difficult part of the adventure? Today, the couple is facing another challenge, that of distribution. Their exceptional and rare piece has a price tag of 176,000 CHF in the titanium version and 211,000 CHF in the white gold model.
Aware that they have arrived “after the storm”, as they say, the couple know that they must now win the trust of specialized retailers and well-informed collectors who may have been burned by so many before-crisis ventures. This will not be easy, but this determined duo has faith and firmly believe that their Revelation will be a true revelation.